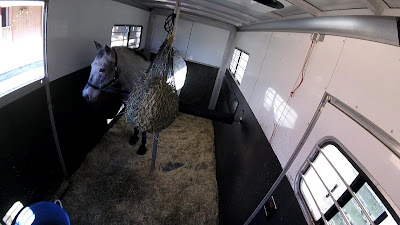 You have now seen Klein riding in a straight load and box stall.  Time to see what the pony is up to.  First, you have to keep in mind that Mochi had not been in the trailer in over a year due to her being out of work because of a Navicular Cyst.  She has been on a staycation I guess you could say, which has recently ended.

Klein and Mochi are quite different in size.  A 17 hand horse fits very comfortably in the box stall, which means it is basically a VIP Suite for a 14 hand pony.  Since the trailer was already set up in the box stall configuration, I decided to take some video of Mochi.  We were only going about 30 mins away.

Mochi is also a very good traveler.  She has always walked right on, and aside from being vocal sometimes, is a model citizen.  I have hauled her up the east coast with Klein, with layovers, no problem.  All three of mine are good.  Klein may throw a random fit here and there about loading but no one stomps, kicks, or is destructive.

Mochi walked right on like usual, but she was nervous once I put the ramp up and shut the tail curtains.  I felt bad because you can't explain to her that we were just going to a friend's house for a little bit.  She hasn't been on the trailer in over a year, or regular work, so she had every right to be worried.  The only way for her to find out that everything was ok, was to get going.

She was her normal vocal self throughout most of the ride.  I did feel her move a little bit but from what the camera shows, she wasn't doing anything crazy, or turning in circles.  She was just moving her front feet to get where she wanted.  She would ride with the wind blowing in her face, then go back to the other side, as you will see in the video.  She is pretty cute, and watch her little ears for maximum cuteness.


Trailering on a regular basis will make it boring for her again.  I don't have any issues with hauling her like this, and will also leave the trailer set up with the box stall for Mochi as well, if I am just taking one horse somewhere.
Posted by The Jumping Percheron at 8:57 PM