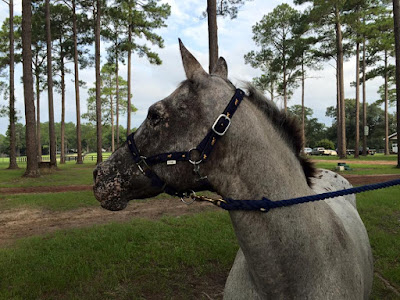 My beautiful little spotted mare.  I absolutely adore this girl.

You all know my most favorite little mare is dealing with a Navicular cyst that we found a year ago now.  She was coming along so nicely after I finally cracked the code on her and I had solid plans of eventing her as far as she wanted to go.  She is a very brave, very fun little mare that loves to work.  Her quirky personality really can't be beat either.  She has made made me fall in love with POAs.  If they are all like her, sign me up for life. 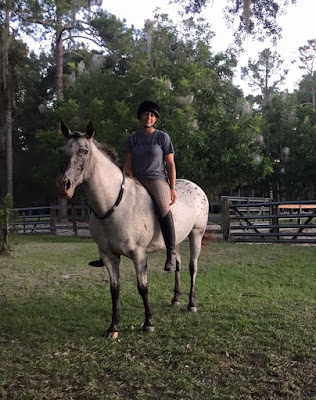 This was in Georgia.  We would hack for miles off the property like this.  I'm telling you, she is one amazing little mare. 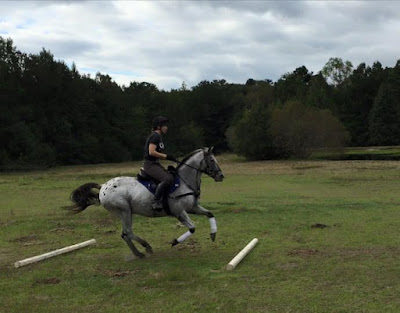 Learning gymnastics.  Excuse my floating hands, not really sure wtf I was doing there. 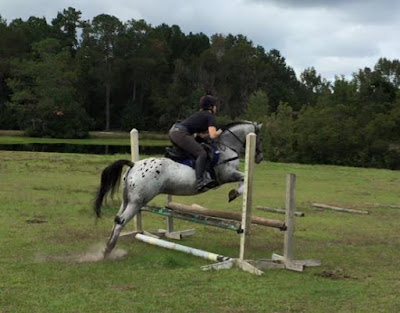 Last February she received her first injection of Osphos, a drug that is used to treat Osteoporosis, but just recently (about two years ago) began being used in horses.  It illicits a bone remodeling response.  Mochi is only slight lame from her cyst.  Her lameness is intermittent.  Our vet said she would be a great candidate for Osphos so we gave it a try.  It take about 60 days to begin working and Mochi made a noticeable improvement.  She now goes days without taking an off step, instead of the low grade lameness being visible at a trot on a consistent basis.

The vet suggested a full six months off of work for her as well.  She actually ended up having the past full year off of work.  A lot of people are asking why I don't just corrective shoe her and be done with it.  I have heard from several sources, these being owners of Navicular horses, vets, and farriers that corrective shoes doesn't always solve your problem.  Even if they are sound with corrective shoeing, they usually enjoy a year of that then begin to show lameness again.  I don't want that for her.  Also, she's very low grade lame.

I have also talked with people that have had their Navicular horse nerved, as in cut the nerve to where that area would be numb and they would no longer feel any pain there.  The issues with that are that the nerves can grow back and reattach 1-5 years down the line and you end up having to reaccomplish the procedure.  There is a limit to how many times it can be done too.  The other big risk is that with a numb foot there is the potential they hurt themselves and never know it until it is at a critical point.  They can also trip in/on/over things out on trails.  This could result in a minor stumble, or it could result in both the horse and rider falling.

I know there are people out there eventing nerved horses above Prelim.  I don't think that's the smartest idea.  I had no plans of jumping Mochi if we nerved her.  I would be happy just taking her out for easy hacks, MAYBE some low level dressage, if we went that route.  I have spent hours over the past four months reading opinions of vets and farriers about the neurectomy procedure.

I began to think that I wanted to go for it.  I discussed it with The Other Half too, it's a joint decision.  Our Coggins appointment was coming up so it was time to have another serious talk about the next step and I was going to ask about doing a neurectomy on Mochi.  I was 90% decided because instead of experimenting with other management methods this way it would just be done and we could begin moving forward again.

Another reason I want her back in some kind of work so badly?  Not just because she's such a fun little mare that is willing to go anywhere, but she LOVES to be out doing something.  She throws big fits on the days I come back with Klein.  It doesn't matter if I rode off of our property or if I am coming back with Klein in the trailer.  She will whinny and run around like she lost her mind and buck.  She's not herd bound.  She wants out.  The few times I've taken her out in the past year, she's as quiet as can be.  If she was herd bound she wouldn't want to leave the property.  Not Moch.  She has been down the road a total of three times in the past year.  It is a new and completely unfamiliar area to her and she struts along like we go down there every single day.  She just wants to do something.  I owe it to her to figure this out.  She's not ready to be a pasture pet.  Some horses would love nothing more, not her.

Anyway, the vet was here last week and my idea went over like a lead balloon.  The vet basically said Mochs is not broken enough to be considered for a neurectomy and that I'd need to really plead my case to her to convince her to do it.  She said she's not a fan of nerving any horse that is intended to be undersaddle again for any amount of work and that she typically does it on horses where the owner can tell them the horse is going to be retired to pasture.

She said she's so slightly lame that she believes we can get her sound with much less.  She said since she responded so well to Osphos the first time, we should go for that again.  She likes Osphos because it's an actual cure.  The improvement you get from the horse is because of a bone remodeling response, and that is permanent.  The improvement you get is permanent.  It's not a management method.  She also said that Moch might be sound in just regular shoes.  Now, regular shoes I am ok with.  But, a few months ago I also had planned on getting her in some Renegade hoof boots.  I just got distracted and never ordered them.

We decided to go ahead with another Osphos injection and I ordered her a pair of Renegades that day.  If we can get the same level of improvement with this injection I think she'll be sound.  I really do. 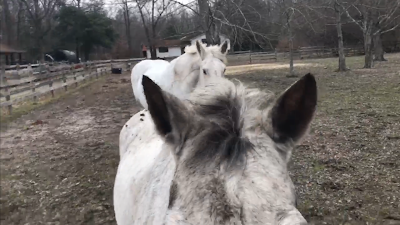 You have to walk the horse for 20 mins after their injection.  The Other Half was home to take care of that at the appt and Klein decided she would join them for the walk. She had to make sure that Mochs wasn't getting something she should be getting too.

Her Renegades showed up two days later and they fit perfect!  I had previously tried some on her a couple months ago to see what size she would need for sure.  She is in a size two with maximum cut back.  I had also ordered a Fit Kit from Easy Care but none of the shells fit quite right.  That is what made us try some Renegades on her and they fit much better. 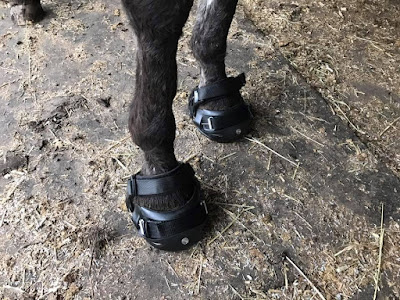 I put them on her and turned her back out.  She walked off like they weren't on her feet.  I wanted her to just walk around in them all day at her own leisure to get used to them.  Later that day I put her on the lunge line to trot her and see how she looked in them.


I am VERY happy with how she's going in the Renegades!  She took one or two slightly off steps on the lunge line, but I'm not 100% sure that wasn't because she is getting used to the boots.  Time will tell.

The thing with Osphos is that it takes 60 days to set in.  During that time the vet told me I'm fine to walk her and do a very small amount of trotting, really just a couple steps here and there, but no more than that while Osphos is working its magic in that 60 day window.  This is more than ok.  Mochs is so far out of shape she needs a minimum of 60 days of walking, easy hacks, before even THINKING about more than that.  This means our plan is exactly that.  I will be riding her at the walk on a loose rein, ponying her off of Klein for long walks, and walking on the lunge line a couple times a week for the next 60 days.  We will do some bridleless (well, with a neckstrap, so I guess it's more like almost bridleless) hacks and walk work in the arena too, that will give her mind something to keep busy with.  Once we get there we will take a close look at what we have from this Osphos injection and see where we can go. At that point, if she is still a little off, I will shoe her (with regular shoes, not corrective shoes) and see what we have at that point.

Here she is ponying off of Klein the other day for a little bit of trot just for me to see how she was looking that day in her Renegades and she was trotting sound.

2017 WILL be the year Mochi is back to work.
Posted by The Jumping Percheron at 9:50 PM