Recently, I saw a video some one took in a trailer while they sat on the floor in front of their horse.  It got me thinking about how my trailer rides.  I have always been curious but no one drives my truck and trailer but me so there's not really a way for me to take a little ride back there.  The Other Half had this ingenious idea to just buy a suction cup mount for my GoPro and mount it back there.  So, I did. 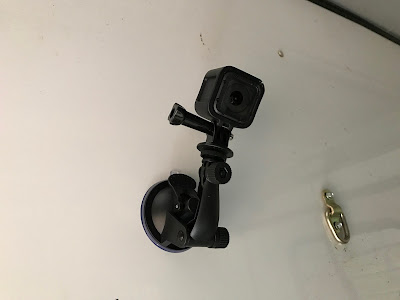 First, a refresher on what I haul with.  My truck is a Dodge 2500 Cummins diesel 6 speed manual, which is why you will hear the shifting in the videos.  It's got some mods so, that is also why it's so loud.  It's chipped with a full 5" turbo back exhaust and upgraded fuel system, among other things.  My trailer is an Sundowner mini 2+1 gooseneck trailer. 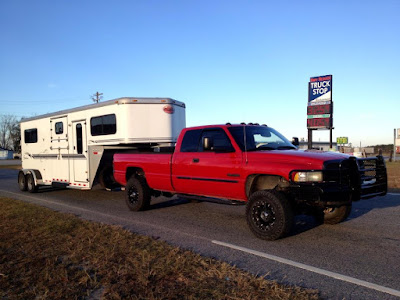 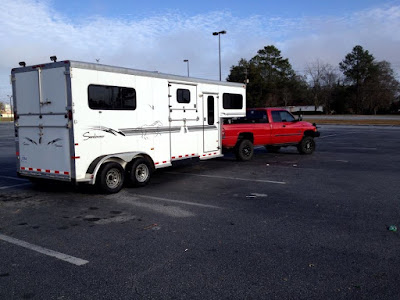 When there is a horse in it, the side ramp door is open and so are the back tail curtains (max airflow for the horses).

My GoPro has WiFi in it and connects to an app on my phone.  This allows me to be able to see exactly how I have the camera aimed and make sure it is where I want it. 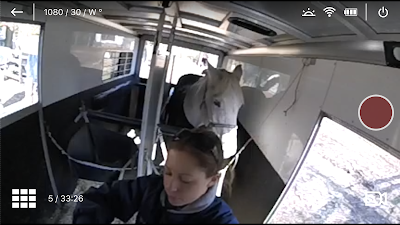 Aiming the camera with the app.

Once I had the camera how I wanted it, I hit record and off we went.  The following are clips from the video with descriptions of what is going on (turn, acceleration, deceleration, etc...)

One clip from today's experiment. My trailer is a gooseneck if you are wondering. This was going through a round-about. #Klein #mare #percheron #shesnotaclydesdale #drafthorse #horsesofinstagram #trailer #hauling #trailering #sundowner #jumpingpercheron #blog #gopro
A video posted by Stacey C (@jumpingpercheron) on Jan 16, 2017 at 6:24pm PST


Not a bad ride, save for some rough NJ roads.  I have received a few questions and comments about the fact that I don't tie my horses.  That's right, I don't.  Ever.  Not even Mochi who could almost fit under the chest bar if she really wanted to.  Why?  Because I don't ever want them to get hung up and choked out by being tied.  Yes, I know, trailer ties should have quick releases, and they do.  But what if that fails?  I want my horses to have the ability to right themselves should they need to.  I don't need a rope ending up around their head, neck, or if it got really crazy, a leg.  Also, I don't have cameras in my trailer to monitor them the entire ride so how would I know if they had the rope around their neck for the whole ride and sustained an injury, only for me to find it when we stop somewhere?  Also, on long hauls, shipping fever.  No thank you.

If you watched Lainey's live stream the other night, she talked about traveling and mentioned an incident where one of her horses got upside down in her trailer and she never felt it, despite hauling horses for years at some point (so this is someone that hauled A LOT and is a pro).  She did not have cameras in the trailer (that was the incident that made her invest in them) and said she was none the wiser that horse got like that until they stopped and by that time serious injury had taken place.  So, unless you have cameras on them non-stop you don't really know what's going on back there.  Anything could happen and I'd rather have their heads free.  Same in box stalls.  What's the point of a box stall if they're not loose?

My horses are also all very good travelers.  No one acts like they have no sense, they all have great trailering manners.  No one kicks, stomps, paws, etc...  Lainey actually said if you DO have a horse that acts like that, brake check them and give them a reason to put their feet on the ground and stop that non-sense, don't coddle that behavior (more on her live stream later, I took notes for a post in the very near future).  I used to haul Klein loose in a box stall over a mountain pass on a regular basis in New Mexico and never thought twice until the day someone saw me load her to go home after xc schooling and said "You just leave her loose?"  Yep.  I have never had a problem.  That actually allows her to ride backward which is what she prefers, given the choice.

The center divider on my trailer can be removed to make a box stall, so that is my next little series of trailer videos.  I will most likely do that this weekend.  Stay tuned for those videos!
Posted by The Jumping Percheron at 10:38 AM