You Have to Pay to Keep Playing 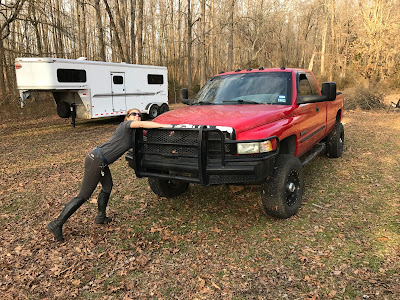 Soooo happy to have my Beast back!!

Some of you might remember that I was kind of getting the smack laid down on me for a little bit, about a year ago, by my trailer and wrote a post called "You Have to Pay to Play" about it.  A new wiring job, a new jack, new roof seal, and six new tires after I bought six new tires (NEVER, EVER put Hi-Run tires on your trailer).  Now it's the truck's turn.

Don't get me wrong, I LOVE my truck.  I'm a Dodge girl for life when it comes to trucks, and The Beast has been nothing short of one of the toughest trucks out there.  The Beast has been hands down one of the best things I have ever bought in my life.  But, it's a vehicle.  A 3/4 ton truck no less, that actually does what a truck like that is supposed to do, haul things, aka work.  Yeah, putting a lift and stacks on your 3/4 ton truck doesn't count.  I'd kick my own ass if I ever did anything like that.

Anyway, vehicles break, consumable parts wear out.  My truck is actually in excellent shape despite being an 02.  People try to buy it off me all the time.  I have even come out of the trailer dealership where I have my trailer worked on and found a group of guys marveling over it.  But, it just hit 148k, which is about halfway through its life span because the 5.9 Cummins is known to go to 300k and still keep on going.  Mine isn't driven every day, so it keeps the miles/wear and tear down.  I have a daily driver beater car for that.  I wouldn't subject The Beast to daily driving on New Jersey roads anyway.

A couple weeks ago I heard the clutch slip in 6th and hoped that I was imagining things.  That was with no trailer on.  Then a couple days after that, I heard it slip in 6th again while I was taking Klein somewhere.  I actually caught a slip on video when I was doing the trailer videos.  I wasn't too upset because 148k on the stock clutch is nothing to complain about.  Plus, I know the guy I bought it from at 122k was doing stuff like hauling GN hay trailers and not using a trailer brake with it.

I figured I better listen to the warning The Beast was giving me and go ahead and get a new clutch in, so I called the shop the next day and had them order a Luk clutch kit for it and dropped it off the next day.  I know a lot of people would limp that clutch out until it was slipping a lot worse.  Why take the risk of having some catastrophic clutch failure while hauling horses somewhere though?  No thanks.  I'll just do the clutch now instead of having to call U.S. Rider to come save me one day when it's hot and the horses and I are stuck somewhere far from home on the side of a highway.

Once the transmission was out, we found the real reason the clutch was starting to slip.  The Beast had a MASSIVE crack in the bell housing.  Three week long story short, after the bell housing work, a new clutch kit, new rear main seal, new front drive shaft, and a $2,701.39 bill later, The Beast lives!  I picked it up today and it feels great, ready for a busy season of taking ponies on lots of adventures!  Yeah, that's a big shop bill, but as far as I'm concerned, having a safe towing vehicle is priceless when you haul live cargo. 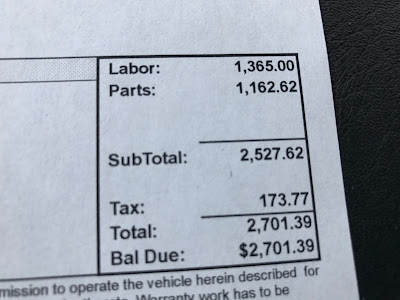 Now I can do my box stall videos!  I kind of feel like the ponies and I have been on house arrest while The Beast was in the shop.  I feel weird if I haven't hauled a horse in longer than two weeks.  Every time I haul, when I look in my mirrors and see my trailer, it feels like the world is right.
Posted by The Jumping Percheron at 10:28 PM