Another Adventure Into the Pine Barrens 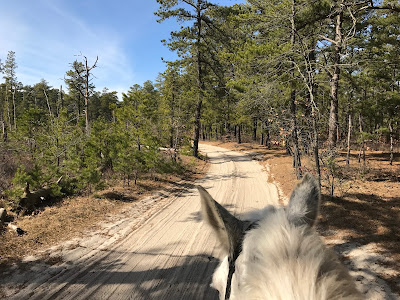 The gorgeous weather over President's Day weekend meant a trip to the Pine Barrens for more exploring.  Again, I have yet to find the end of the main road.  I also found a new serious of trails that branch off from that main road.  This place is just awesome, except for some random creepers that try to take video of us.  Sometimes, I really wish Klein had an invisible button that I could press and we would instantly disappear.

We live in an area where there are A LOT of horses, yet people act like they have never seen a horse when she appears.  I know, it's because she's big, and she's grey (white).  She is a novelty.  But, novelty or not, it is WEIRD when people you don't know stop walking mid step, break out their phone and blatantly point it directly at you and hit record.  I DON'T KNOW YOU PEOPLE.

I completely understand if we are at a show.  People go to a show to watch the horses.  Video away.  But random people on trails????  It is just so creepy and voyeuristic to me.  I can't stand it.  I am kicking myself for not putting my GoPro on before we went out.  I had it with me because I had just done the box stall video.  If I would have had it on, you better believe I'd have video of these weirdos just like they do of me, and I would post it here and show you guys.  It happens every time, so next time I WILL have it on and I'm sure I'll catch some weirdos on camera for you with their stupid response of why they are being creepy.  I mean, what if I halted Klein, got my phone out and just started taking video of these people I have never met in my life walking by us on the trail without saying a word, is that not weird?  I will admit, I am fully aware that my profession has made me more paranoid than what you would expect because of the nature of my work, but I don't think getting videoed by people I don't know is far from a normal level of being creeped out?

Anyway, it was also my birthday that day, and I was determined not to let any creepy mofos ruin it.  I just turned Klein and trotted quickly away from them.  I didn't feel like confrontation that day, normally I'd be quick to call them out for being weirdos.  It was beautiful and I just wanted to enjoy it with Klein, alone.  The Pine Barrens also smell AMAZING.  So not only was it pretty, it smelled as pretty as it looked. 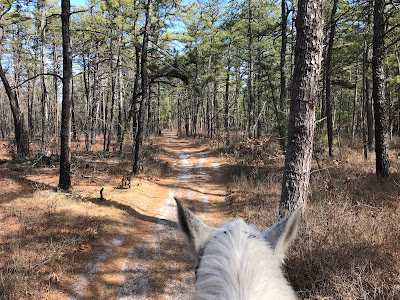 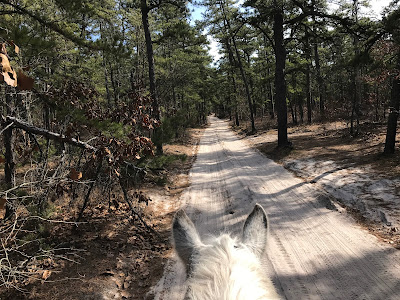 After we did some long trots, and a couple gallops down the new trails we found, we headed back and stopped at the water in case Klein wanted a drink.  She did, and she also wanted to play in it.  She cracks me up.  She LOVES playing.  She has always done it since we were in Hawaii and would get in the ocean.  She has never once tried to lay down in water either, which is why I let her splash as much as she wants because I know she's not testing the water to find a spot to dunk me. 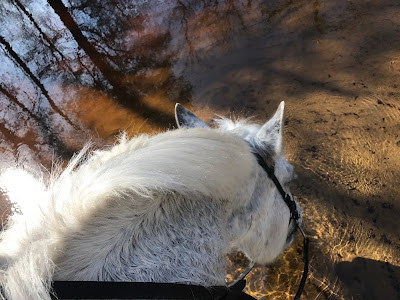 
Also on our way back, we had almost made it back to the parking lot when two loose dogs came sprinting down the road at us.  I started yelling, which the owners heard before they saw us and then they started yelling for their dogs to come back.  People.  You are in a leash area, and you just came from the parking lot WITH A HORSE TRAILER.  But common sense isn't common, so I wouldn't expect them to put two and two together, or realize that is how lawsuits start.  Instead, I'll have to yell at your dogs to scare them before they do something they are going to regret.

That still didn't ruin our ride.  Creepers, loose dogs with their dumb owners and all, we had a beautiful ride. 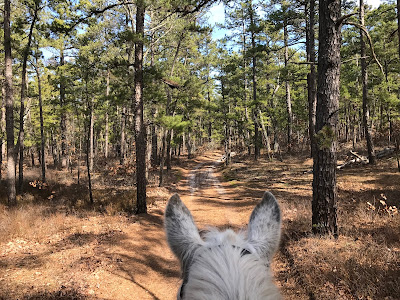 Posted by The Jumping Percheron at 7:51 PM