Wes and His Abscess 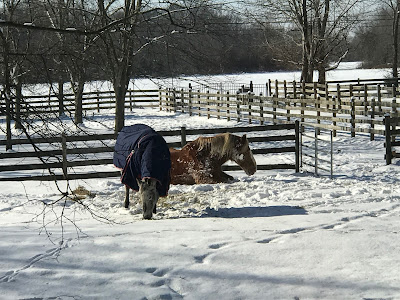 Just over two weeks ago, while I was feeding breakfast, I opened the gate to let the ponies into the other pasture where their breakfast hay was.  I noticed Wes was slightly off in his left front which is completely not normal for him.  He has never had an issue in the almost three years that he has been home.  I stood there in a little bit of shock/panic.  He will be 26 this year, I worry about him despite him being in great health.

I felt his legs and there was no swelling or heat anywhere.  I decided to just watch him extra close that day.  I stalled him that night, which I felt super guilty for because he is never stalled, but I did it to see if there would be any improvement with limited movement.  There wasn't.  I also had given him some bute, which was not a good idea for an abscess since it is anti-inflammatory, but at that point I wasn't sure what was going on. Stalling him wasn't the best thing either since movement would help the abscess get pushed out.  Also, this is only the second time I have ever had a horse get an abscess in my life, so I'm not an expert by any means.

I felt his legs again the next morning, still no swelling or heat, but his lameness had increased.  I wondered if maybe he took one to the shoulder from Klein because Mochs had interrupted her nap time a couple days before that and she threw a big fit.  Time out for a second, I had been gone a lot recently for work for the couple weeks prior, so her work load has decreased, and any time that happens, man does it show.  She is not a horse that enjoys idle time.  She gets super irritable.  But, put her to work and she is completely content.  On one hand it sucks, but on the other I appreciate her love of work.  Ok, game on, so I thought maybe, just MAYBE she had caught Wes in the shoulder with her little temper tantrum.  She was kicking and squealing but we didn't think we saw her connect with anything.  I also wondered if maybe he stepped on something or slipped and fell since we had some rain. 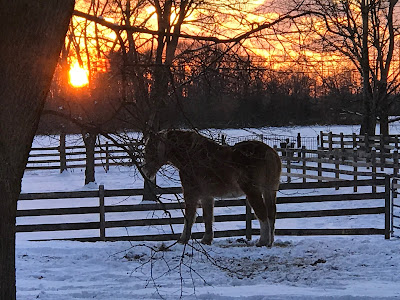 Holding that front left out in front.

He was still eating, drinking, and acting completely normal so it seemed to be isolated to that hoof.  Even though it was bothering him he still got down and had his daily roll and got up just fine afterward (see first pic of this post).  If he stopped acting normal, or stood around and wouldn't move, I would have called the vet immediately.

Later that evening The Other Half was cleaning Wes' feet looking for anything out of the ordinary and was like "This foot STINKS."  He went and grabbed our temp gun and started hitting all his feet.  That left front was 10 degrees hotter than his other three feet.  Sudden onset of lameness, a hot, stinky hoof...that usually means one thing, abscess.  I texted my trimmer and told him what was going on and he said he would be out to take a look and in the meantime to get some Animalintex on that foot.

You want to talk about awkward stuff?  Try being a couple that doesn't want kids, doesn't enjoy being around them, and needing diapers to wrap a hoof.  We could not even find the diaper aisle in the store at first.  Then we were completely confused about what type to even buy, and if it even mattered.  Once we grabbed a package of them, we made a bee line to the checkout.  I didn't even want to be seen carrying a package of diapers.

We made a pretty sweet Gorilla Tape and diaper boot twice a day for the next couple days to keep the Animalintex pad on the sole of his left front.  By the next morning after the first night with the poultice pad on, that foot smelled even worse, and Wes was even more uncomfortable.  Poor old man.  I felt terrible for him.  I must have apologized to him 250 times. 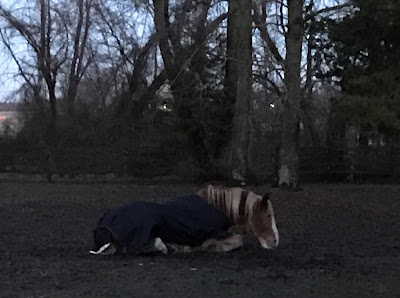 This scared me too.  I hoped he was just sleeping in and not down because his front left was that excruciating.  He got up as soon as I pulled in the driveway though, he was just waiting for me to come back to feed breakfast.  Every morning I leave super early for the gym and feed them as soon as I get back.  They don't get up for me when I leave because they know it's not breakfast time yet, so he really was just sleeping in.

Our trimmer came out and tried to see if he could find a track but it just wasn't to that point yet.  The Other Half swore up and down that he had found a sore spot in his sole and the trimmer found that same spot with the hoof testers.  Wes' eyes got really big when he hit that spot.  It had to be close to blowing somewhere though because that foot smelled SO bad.  We ended up scrubbing our hands with coffee grounds when we went inside for the night because they smelled so bad.

The next day, still no luck with the abscess showing itself.  However, The Other Half then said he was pretty sure he felt a bulge in the coronary band.  We poked around that same spot that was sore on his sole and he really had no reaction to it that day.  At this point we were pretty sure it was going to go up and out through the coronary band.  By the next day it finally started to.

I made the mistake of feeling around the coronary band with some of my nice SSG riding gloves on, because I had just got done riding.  I felt a gooey spot and, like an idiot, put my glove up to my nose and almost threw up from the smell.  Yeah.  Found it.  We had to scrub our hands with coffee grounds at one point to get the smell off of us. 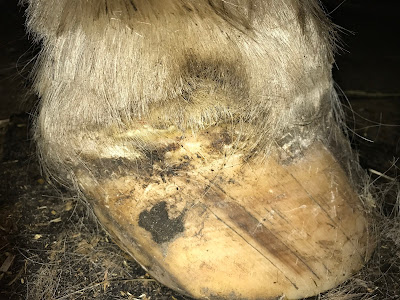 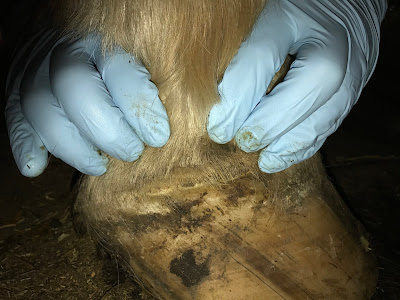 The first night we were for sure it was coming up and out.  At least one of us is smart enough to put rubber gloves on and not go feeling around with your nice gloves on. 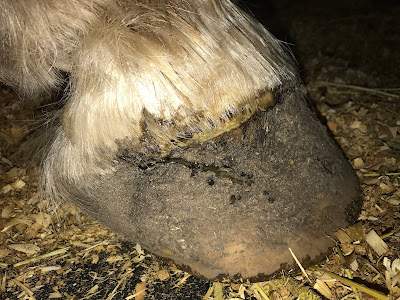 Starting that night we put the Animalintex pad on that area and wrapped it to keep drawing it out.  FINALLY.  The next day, Wes started to be more mobile throughout the day.  He also wasn't as sensitive to me touching that area to get the pad on and wrap it.  I am currently still changing the pad and re-wrapping twice a day. 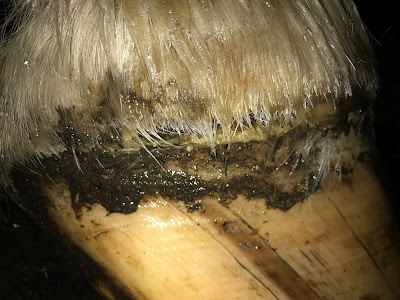 By Friday, he was moving even better.  Much more mobile and less lame.  He was clearly finally feeling relief.  By Saturday, even better!  That was the day that the EquiVibe came out, hopefully that will help contribute to putting and end to this thing even quicker and giving his body some relaxation after compensating for that front left all week.  The next morning when I unwrapped his left front the abscess had finally started to break open. 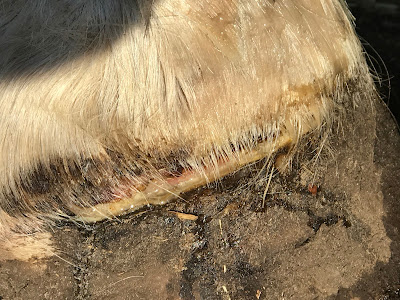 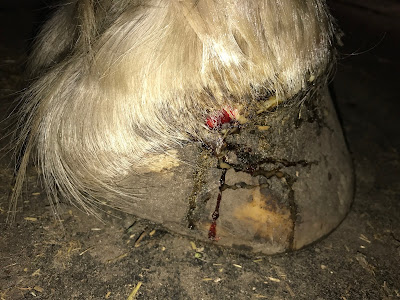 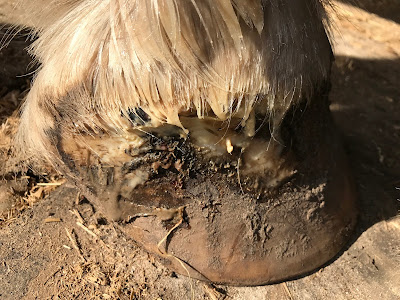 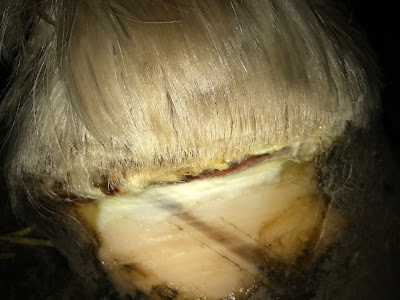 The next evening after cleaning it up before re-wrapping for the night. 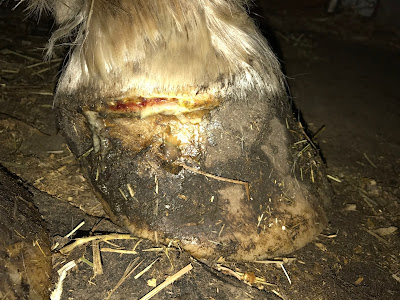 I was wrapping twice a day, morning and evening.  I would clean it up before re-wrapping.  Here is before cleaning again. 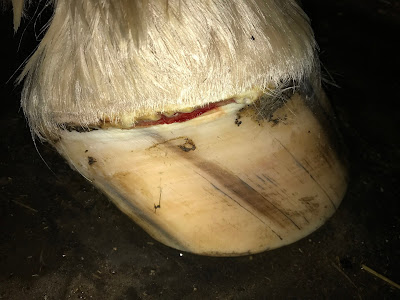 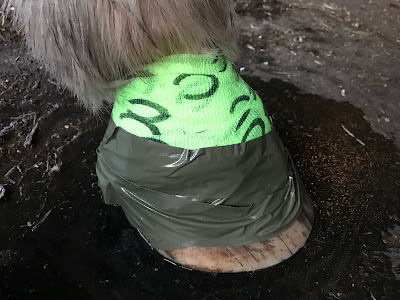 One of the duct tape and vet wrap bandages he was getting twice a day, with a warm poultice pad directly over the abscess. 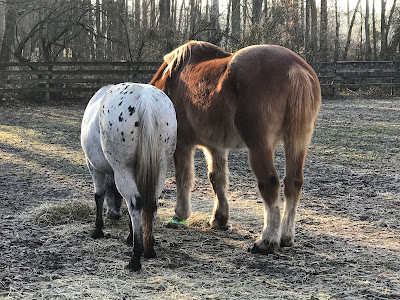 Enjoying breakfast with his pony.

It has been over two weeks now.  At the two week point we soaked him with a warm Clean Trax soak in hopes it would kick out the last bit of drainage. 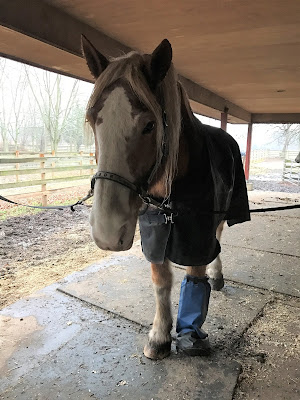 Such a patient guy.  He just puts up with whatever.  A true gentle giant. 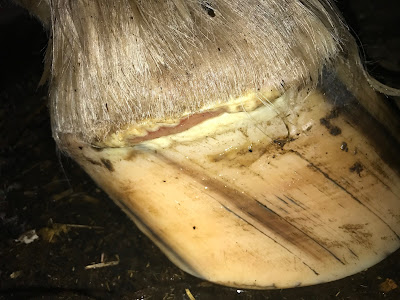 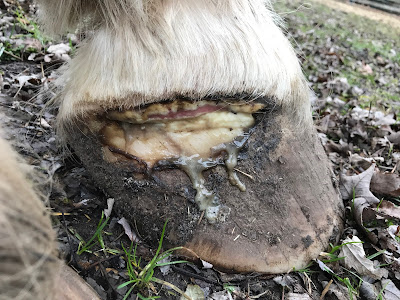 After the Clean Trax I started wrapping with dry poultice pads and they were still pulling some pus out.

And here we are last night. 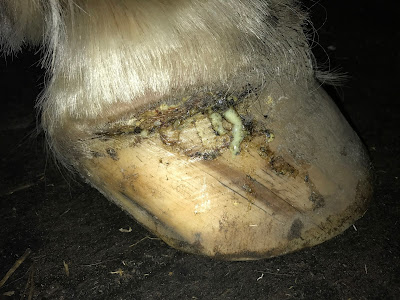 Still just a little bit of drainage.  I'm going to soak him again and start wrapping with dry bandages (no poultice).  It has been raining off and on here for the past two weeks also, so that hasn't been a big help. I have been letting it air out while I clean up the pastures and do my other barn chores.  I also let it air out yesterday all day while he was in our other pasture where there are no puddles he could go stomping through and get it covered with nastiness.  He is 95% sound right now too.  This thing has put up a fight, but we are close to claiming victory!  He has been such a good sport about this whole thing.  So many horses would kick your head off for so much less, but even on his most uncomfortable days he let me do whatever I had to do to take care of that foot. 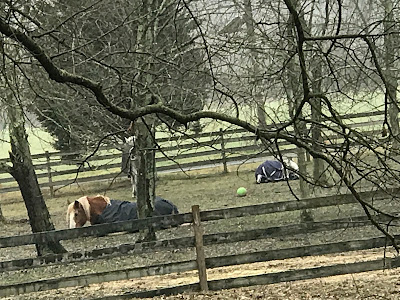 Here he was yesterday having group nap time with Mochi.  Klein had the watch.  After these two got up Klein laid down for a quick nap.

P.S. He looks a bit long in these pics because he IS due for a trim but, we had to obviously delay that until he was more comfortable.  Pedicure day is later this week!
Posted by The Jumping Percheron at 10:00 AM