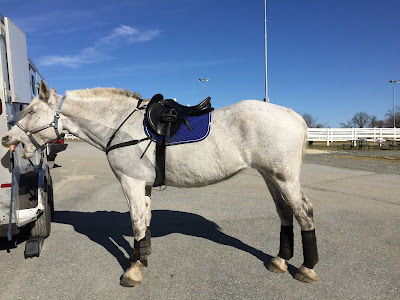 Ready for a nap after a great xc school.

Klein and I had our first cross country school of 2016 yesterday.  There has been a lot of rain lately so it was slightly a gamble on how the footing would be, but it was so nice out, and we've been dying to get on the xc course that I took the gamble.  I had planned on going to a different course that day but that course wasn't dry enough yet and is closed until it drains a little bit more.  The place we actually went to, Carousel, sounded like the footing would be good to go.  Also, Carousel is a lower level place that doesn't hold recognized events, making it was a great place for our first warm up xc school. 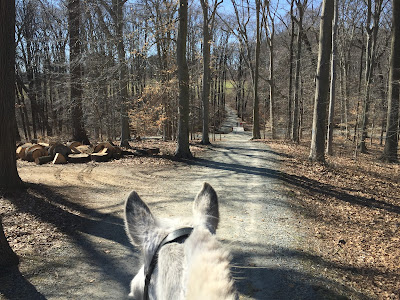 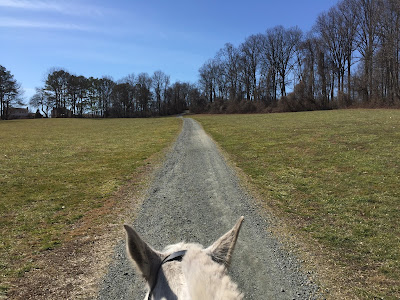 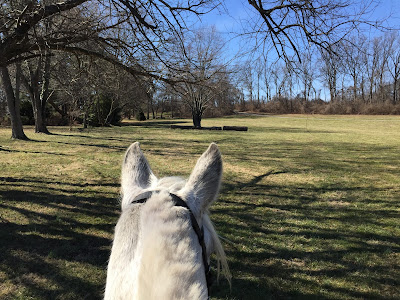 The first fences on the course.

The big advantages to it are that it has some big hills and it is on an open park where there is a lot of people wandering around, most with dogs and children.  Well, dogs aren't an advantage, but a good distraction test I guess.  There is a dog park there, but there's always that one idiot, right?  We ran into that one idiot on the landing side of a fence too.  We land and he turns with the deer in the headlights look and goes scrambling to catch his dog because of course, he has his dog running free where it is supposed to be on a leash.  Come on people.  There's a dog park within sight (seriously he just had to walk his lazy ass about 300 more feet!) for that stuff, plus, there's TONS of horse jumps everywhere, you KNOW there's riders out there.  Whatever, luckily for him, his dog didn't come running after Klein so no violence on my part ensued. 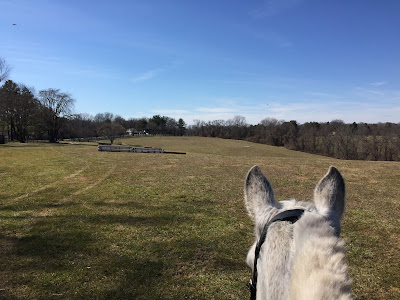 Klein and I haven't done a real xc run for a while, so this was a good refresher, plus with all the hills, you can't beat the conditioning that place has to offer.  We warmed up over some BN stuff to get our minds in xc mode.  It took about three fences and it's like I hit the "XC On" button on her.  She was ready to go complete Beast Mode on anything I put her in front of.  I was immediately reminded of that time we almost got speeding tickets on the Area X championship Novice course.  We were three seconds from getting speed faults for being too fast...oops.

Yesterday was about committing to our distances (continuing the trend from our last couple stadium lessons), knocking the xc dust off, and conditioning mentally and physically aka getting into the xc mindframe.  I KNOW she could have went out there and jumped every Training fence that place has.  But, that's not fair to her.  Mentally, she'd be all about it.  But physically, I knew those hills were about to put some hurt on her.  You can't up the intensity and volume at once.  You have to bring one up, then the other.  That's a recipe for disaster.  I wanted to give her an easy, confidence boosting school.  Mission accomplished.

Here are some of the jumps: 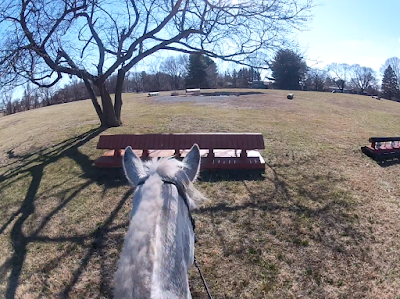 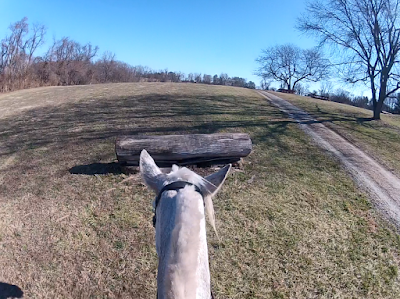 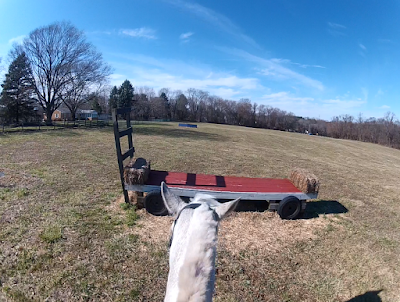 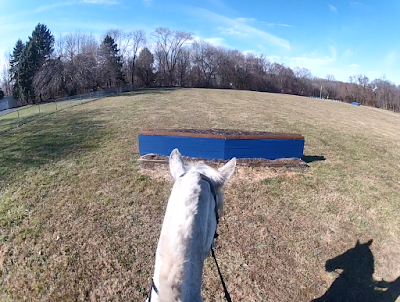 I let her drift a little left on this one for no apparent reason.  Noted, we'll fix that next time.


Here is some helmet cam from yesterday.  You can tell from the video just how steep the hills are there.  That place is solid gold for those alone.


I ordered a new GoPro today.  It's time for an upgrade.  I got a new GoPro Hero4 Session.  It's much more compact and lighter than the Hero2 I have. The Session also connects to your phone through an app, meaning I can instantly view my videos and upload them to Instagram, Facebook, etc... without having to go home and get them off the SD card first.  You can also connect through that app to make sure your angle is good and the view is exactly how you want it before taking off with it.  My Session is on its way and should be here by Monday.

We would have played in the water more but I had to run her in polos yesterday because a strap broke on one of her rear Woof double lock boots she normally wears.  They are the ONLY thing I have found that fits her rear legs.  However, I did compare the Woof double lock boots that she wears with an XL in the Woof Wear Smart Event Boot at a store recently.  They APPEAR to be the same.  I have tried XLs in different Woof boot models and had them turn out to be too small for her rear legs.  After the strap broke I ordered her a pair of the Smart Event boots for her rear legs.  Cross your fingers for us that they fit.  If they do, I'll order her a pair for the front and keep the double locking for stadium and back up xc if we need it.  The Smart Event boots should be here by Saturday.

If she had her boots on we would have been in the water more, but she went through it fine so, we'll jump into it next time we're there. 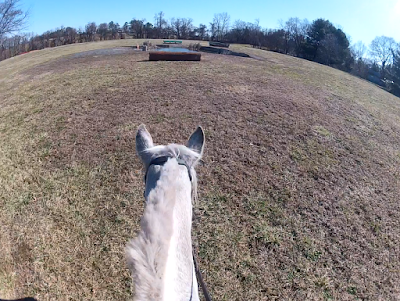 Coming up to the water.


I like where the water is here because you can come uphill to it where you can't see the water from the bottom.  You can't see it until you can see over the first log.  That was a good test to see if it surprised her, it didn't as you can see on the video. 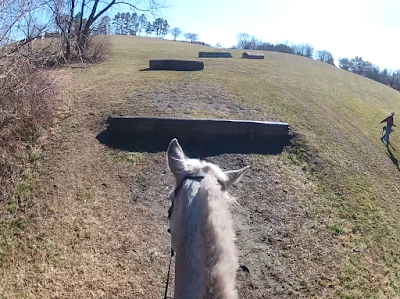 My favorite picture from yesterday.  Klein multi-tasking at a gallop in front of a little combination.  She is like "I'm going up this bank to the log, but I'm also going to know EXACTLY what that lady and her dog are doing while I do it."

After we were done Klein yawned and yawned, had a drink, had her granola bar, cocked a back leg zoned out and waited for me to liniment and wrap her.  She has been on her VERY best behavior for loading lately.  I'm 98% sure I've figured out the trick to stop her random fire breathing loading fits.  They are far and few between but I think I've got them eliminated from her arsenal.  She basically loaded herself yesterday.  I'll have to make a video to show you guys.  All it involves is pretty much holding the lunge whip in one hand behind her.  I have to be VERY particular in how I hold it because a lunge whip can be a MASSIVE insult to her if the wind and humidity are right and the cosmos is aligned.

Of course, no day is complete with out a good roll when you get home.  I had just cleaned her up the night before and was going to put her sheet on her to keep her clean but, I felt like that would kind of be an ahole move to ruin her roll with an annoying sheet after she worked so hard and did such a great job.  So...have at it girl, get as dirty as you want. 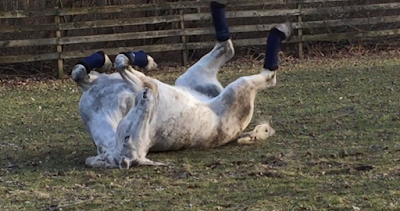 Posted by The Jumping Percheron at 9:50 PM