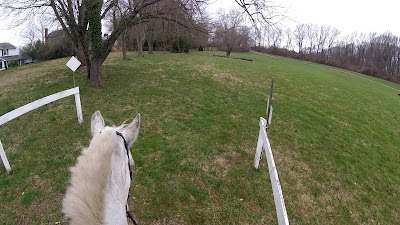 It was beautiful pretty much all week until Saturday.  Of course Saturday had to be breezy, grey, and in the mid 40's.  Yay.  I would have been fine if the sun would have just come out, but no luck. I was cold until we really started getting moving.

Klein wasn't quite awake yet either.  I don't blame her.  I never did wake up that day, I blame the weather. When I went out to get Klein, Mochs and Wes came right to the gate but Klein KNEW she was going somewhere so she stayed out in the pasture.  She doesn't run off but she's just kind of like "Seriously??  It's early."  I've woke her up before all curled up and adorable in a pasture to get up to load for wherever it was we were off to that day.

Despite the mare glares I got before bringing her in, she basically loaded herself.  I think Klein feels just like any of us, sometimes you have to drag yourself out and just get there, then you're totally fine.

Klein has been nothing short of amazing with xc so far.  It's like no time has passed since she schooled xc, when in reality it's been almost two years until this month.  Here's the helmet cam from Saturday.  Bits and pieces of it you have seen from a couple weeks ago, some you haven't.


I muted this one because I am sure you all don't want to hear my sniffling in the cold the whole ride.  I didn't even want to hear it reviewing the video.

Overall, I was satisfied with my riding.  I felt like we were a little off the whole day but I really think it amounted to me being half awake for some reason and it just being cold and grey.  I know events can end up with weather like this and they will go on, we've competed in cold, wet storms before and hurricane force winds.  Despite being a little out of it, we stuck to our guns and and committed to everything, which is what matters most for us.

I did have one stop that day, due to my own incompetence.  It was cold.  I wanted to avoid being in the water aside from a couple times.  So, instead of letting Klein drop down into the water first without adding the fence before it, I just went for it and it surprised her.  That's what I get, that's where Klein tells me I need to wake up a little more.  It only took that once and there was zero hesitation in her about it from then on.


This next weekend we are schooling a full course.  I'm going to walk it like I would at a HT and not let her see it before we run it.  That way we can do a little practice run of a course we've never seen before.  I'm really looking forward to it.  Hopefully I can get some video of us besides my helmet cam.  I'd really like to see what she looks like going over these fences these days.

She had a busy week last week.  She had two gallops, a gymnastic school, a dressage school, and xc.  She's enjoying two rest days right now.  I have a special surprise for her this week.
Posted by The Jumping Percheron at 10:03 PM