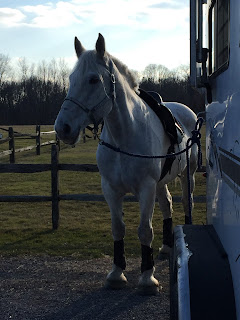 Last Sunday I got a last minute invitation to go for a long hack in with a couple friends in Assunpink Wildlife Management Area, aka 6,800 acres of riding.  I have been meaning to go and had recently bought the annual pass to ride there.  It looked like it was going to be a really nice day, why not?  Klein would enjoy a long, relaxing hack (and so would I of course).  We ended up being out for a couple hours and riding nine miles.  It was a good day with good people and good horses. 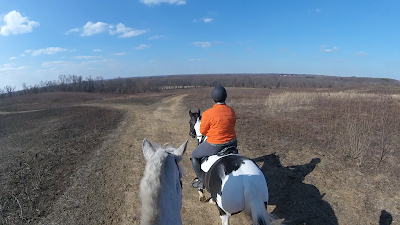 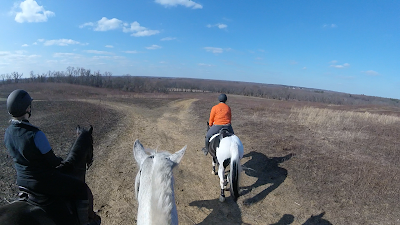 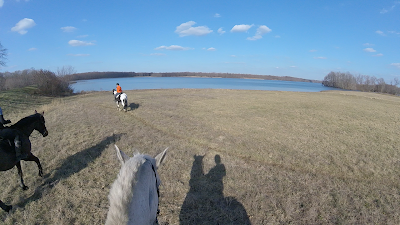 This place is filled with hills and a couple lakes.  It's a great place to ride.  We had a fun gallop along one of the big lakes.  The ponies all had a fun time being out doing nothing in particular.  That kind of thing is always good for pony mental fitness.

Klein was cracking me up when we were done.  I loaded her and was saying bye to my friends and Klein was doing her low nicker from the trailer, basically telling ME I need to get a move on.  She had already had her granola bar, an apple, and had plenty of hay to stuff her face with, but she still felt like she needed to speak up.  She does that sometimes.

At the Jennie Brannigan clinic she was in the crossties after our ride.  I was watching the next group for a few mins and Klein was untacked and blanketed, she had already had her treat, but I heard her speak up from around the corner.  It's too funny that she rarely talks to other horses but she won't hesitate to say something to me.  I wouldn't trade her personality for the world.

Anyway, we had a great time and are looking forward to more fun rides in this gorgeous Spring weather that has moved in!
Posted by The Jumping Percheron at 6:00 PM

Email ThisBlogThis!Share to TwitterShare to FacebookShare to Pinterest
Labels: hack