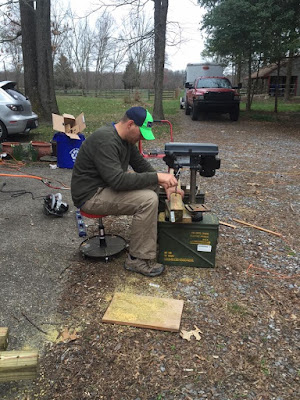 The Other Half has outdone himself again recently. I don’t think there is a day that goes by that I don’t acknowledge that I’m a very lucky person.

I had some jump standards that I had drug halfway across the world with me from Hawaii, to New Mexico, then to Georgia. They were starting to fall apart by the time they made it to the second barn in Georgia. Before we left, The Other Half told me to go ahead and just burn them because they were getting so torn up. He promised to make me some new ones that were way better than the untreated crap standards I had, so I burned them. 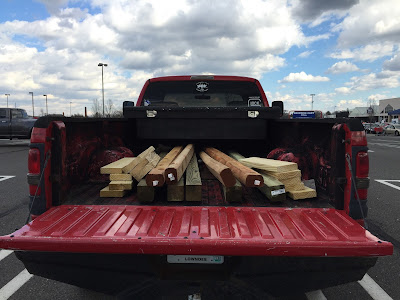 Awww yyyyeah, arts and crafts time at our house!


Well, not only did he build me new ones, he did a FANTASTIC job on them. He is a perfectionist when it comes to things like this. He even was a bit upset that I bought the wood without him there because that meant he was unable to inspect every piece I picked out before I bought it. He did say I did a pretty good job on making sure all my wood was straight, and at least I knew to buy treated wood. 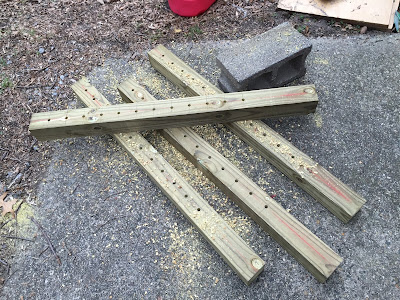 I bought enough to make five sets of standards for now. We can add to that later, but I figured five sets would be a good start, plus I have a full set of cavaletti. 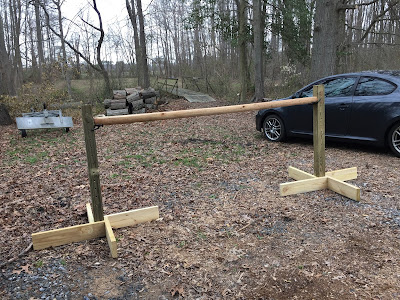 One set of the finished product!  Ready for paint!
This is a dream come true for me.  My horses are at home, and I have an arena also at home, complete with legit jumps.  I can't believe it.  This is beyond awesome.  I've waited for this day for a lllllong time.  It would not have happened without The Other Half.

He even put together two more the other evening so I could have them for gymnastics yesterday after he had been out running around with over a hundred pounds of gear on, shooting at people and getting shot at (federal law enforcement trains for real, people).

Klein and I schooled OUR jumps at HOME for the first time last night.  Klein also just happened to have the BEST school at 3'3" that we have ever had, EVER (next post).  It was unreal. 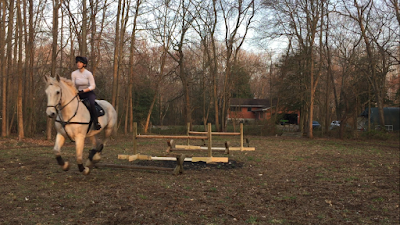 Warming up through a low Lainey #gotd line.

I'm SO excited to be able to put together so many great jump schools AT HOME now!
Posted by The Jumping Percheron at 8:31 PM

Email ThisBlogThis!Share to TwitterShare to FacebookShare to Pinterest
Labels: jumping, The Other Half