I mentioned Klein and I had our best school at 3'3" we've ever had the other day.  Now, let me explain. 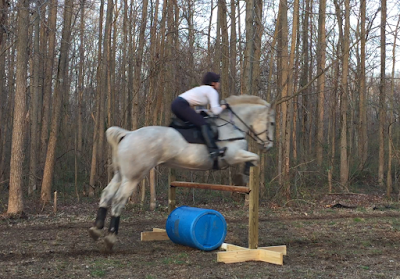 Uh, thankfully I have a pic from this school to notice my stirrups have apparently stretched a little bit.  I raised them!

Klein has been schooling 3'3" for a while now.  But in the past year I have really been working on my accuracy.  3'3" isn't big, but it's a height that you can't just go around a course like Mr. Magoo, as Denny calls it, and have the horse save you from not being able to see distances.  Well, maybe some people still can do it like that, but I can't.  For me, that stopped at 3'.  I have been counting to every fence in the past year because I used to have a big habit of not, and that's only making life harder than it needed to be.

Denny hammers home the importance of counting ALL the time.  It was reading post after post about it that I started counting consistently.  Then Doug Payne (one of my absolute favorites!) put an end to the distance debate too when he wrote an article for EN about when his eyes were opened to counting.  Even in my dressage saddle I pick something and count three strides out from it some times.  Sometimes on gallops during our conditioning rides, I will pick something specific (tree, bush, hole in the ground, a random piece of trash on the ground, etc), sit, count down three strides then get back out of the saddle.

Lately I've felt like our jumping is the best it has ever been.  We had a little hiccup with committing to our distances when we first got here, but we sorted that out.  Well, not we, I did.  Klein only does what I do or do not tell her, so I had to fix myself and give her a better ride.

The point of all this?  I think all the obsession I've had in the past year with my accuracy is paying off.  The other evening Klein felt like she was jumping 2' fences instead of 3'3" fences.  She was effortless.  She used to give me a bigger effort over 3'3" but now, she's just like meh, easy.  She can school 3'6", I've jumped her up to 3'9" and it was no problem for her. 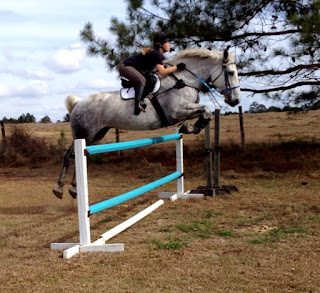 Not only can she school 3'9" with no problem, she looks amazing over it.

But, I felt like until I got my riding a little more together we would stick to 3'3".  The other evening showed me that 3'6" courses are looking like they're coming up REAL soon for us.  This year we are doing a lot of recognized HTs but I have been wanting to get her to some Prelim CTs.  She's got the dressage for it, I just wanted to get my stadium accuracy better (and finish last year at Training for the year end awards).  Well, we had a great year at Training CTs, so goal accomplished there.  Time to move on.  Will she ever do a Prelim HT?  I don't think so.  Training is definitely on the horizon for her, but for a three phase, Training is her limit.  We school Training XC and have done an unrecognized Training HT.  A dressage and stadium CT at Prelim?  Absolutely fine for her.

Klein felt so good the other evening I went out and re-measured my jumps when I was done riding because I thought I must have set them lower than I thought.  Nope, I didn't.  They were 3'3".  Go Klein mare.  She's such a beast.  Her papers say she was born in Canada, and I did buy her from Canada, but I'm really starting to think they're fake because there is just no way she's from this planet.

A warm-up line from the other evening:

Posted by The Jumping Percheron at 10:30 PM