Do NOT Put Hi-Run Tires on Your Trailer!!!

Just when I thought the trailer drama was over...  Remember our blowout on the Georgia to New Jersey haul? 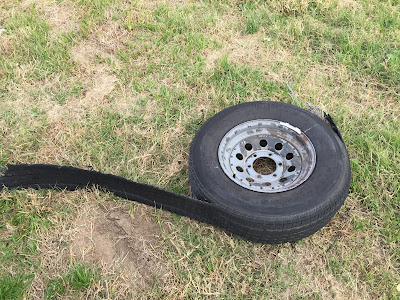 Remember how I said ALL of my trailer tires are new??  I just bought five last summer.  They are all Hi-Run tires which are a standard trailer tire.  They were what my regular tire place ordered for trailer tires so I didn't think much about it.  I got them in load range e too, which are 10 ply tires.  I also know that most tires are made in China now, despite some of the companies being American owned, just like millions of other things.  Do I want Chinese stuff?  No. But when the majority of them are made there and it is something mass produced from a mold, how hard can it be, right?  These are not a super cheap tire either.  I wouldn't knowingly put some crap like that on my horse trailer of all things.  My Scion?  Probably.  My truck and horse trailer, absolutely not.

The Other Half checked the birthday on these tires too when they showed up to make sure they hadn't been sitting for years in a warehouse somewhere.  So, obviously I was slightly pissed off when I had a blowout on the way to New Jersey from Georgia.  I thought I just had that unlucky number to have a brand new tire come apart.

Yesterday Klein and I went xc schooling.  I came home and as soon as I got out of my truck to unload Klein I heard hissing.  I yelled at The Other Half to come and listen and unloaded Klein.  Sure enough...a belt was separating in the left rear axle tire.  Are you f'ing serious?  I JUST BOUGHT THESE TIRES.  Now, I'm pissed.  This is completely unacceptable.  It's pretty hard to be too upset though knowing that I was THAT close to a belt separating and had just been on the highway.  Part of the trip yesterday was going over the Delaware Memorial Bridge too.  It's a big bridge with no break down lane.  Yeah, that would have been probably the most un-fun thing in my life if something were to happen going up or down that bridge. 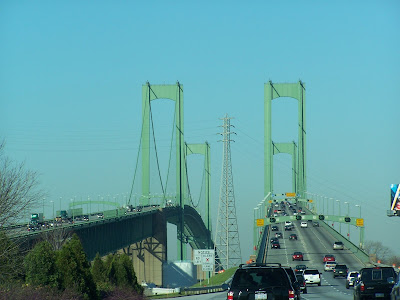 The Delaware Memorial Bridge that we had to cross to and from our schooling yesterday.  How not fun would it be to have an issue on this??  The traffic is always the same as the picture too.  Sometimes they are working on it and have a lane shut down, which makes it even more fun.

I'm calling my tire place in Georgia tomorrow.  This is complete bs.  However, I don't want them to warranty replace these pieces of shit.  Now I get the fun chore of replacing all six (four on the trailer and two spares) tires, five of which I JUST BOUGHT.  Fml.  We are xc schooling next weekend too, so I need them on my trailer like, tomorrow.  These two going down just took out my two spares and there's no way I'm going somewhere without at least one.  I have been driving around with one spare since the blowout on the trip up here, because I've been a slacker on putting a new tire on my second spare rim only because I haven't had to haul far to anything here, now I'm glad I was.  I would have been in the same mindset of "oh it was just terrible luck" that the one came apart and replaced it with another Hi-Run to keep all my tires the same.

I double checked and Carlisles ARE still produced in the U.S.  I ordered two today and they will be here this week.  Both spares will be back in business and we'll be rolling out to another great xc school this weekend.  F you Hi-Run.  Never again. And to all my horse friends, DO NOT EVER BUY HI-RUN TIRES!  Not even for a pedal bike (if they make them that small, still, don't do it).
Posted by The Jumping Percheron at 10:03 PM