DISCLAIMER:  If reading about trucks and mechanical stuff bores you (and it shouldn't if you are a horse person) then feel free to skip over this until the next post. 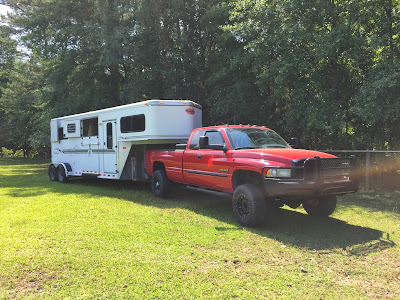 The Beast (a Dodge 2500) and my trailer on one of our recent outings.

I've had a little bit of truck drama lately.  I've had The Beast for almost four years now and it hasn't had any issues.  It's been great.  I love this truck, it's super powerful and I have hauled horses over a mountain pass in New Mexico, passing cars as I was going up the pass.

It all started with a rattle I heard on The Beast aka my truck.  I first heard it going through a toll booth on the Florida turnpike and I wasn't sure if it was my truck or my trailer.  It wasn't too loud and wasn't affecting the way the truck drove.  That trip I did notice a rumble in the truck through a certain RPM range though.  My truck is a 6 speed manual so you have a little better feeling for things like that.  You can hold the truck in a gear and really be sure you're feeling something out of the ordinary.  I immediately knew it was some kind of back pressure issue and assumed I had an exhaust leak somewhere, not an overly big deal.  Everything was fine on that trip and I didn't really hear that rattle again.

I've hauled a lot the past couple months, sometimes every weekend for the whole month, so it's hard to remember on which exact trip I heard the rattle again.  I definitely heard it that day I got a flat on my trailer and had the windows down listening for anything else while I was limping my truck and trailer to a gas station.  When I got home that evening I made The Other Half ride around the block in The Beast with me while I'd push the clutch in and let the truck coast.  I was like "HEAR IT?!?!  WTF IS THAT?!?!"  It almost sounded like a rattle in a can of spray paint, but there was another more metallic rattle that sounded like a loose heat shield somewhere.

The Other Half had me keep the truck running and he crawled under it and had me rev it a couple times then jumped up and said he knew what it was.  So I shut the truck off and crawled under it to see what was up.  My muffler...was done.  We hit it a few times and it made the exact rattle I would hear when shutting the truck off, the loose heat shield sound.  Which made sense because it was essentially a loose heat shield the way the muffler had blown out. 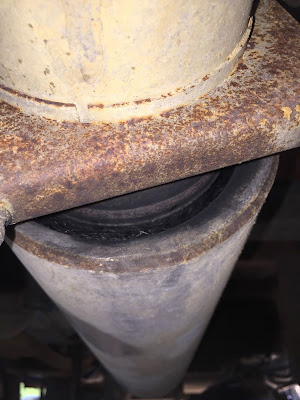 See that steel wool looking stuff?  Yeah, you're definitely NOT supposed to see that.

As soon as I saw that I INSTANTLY knew that was the source of the back pressure I felt in a certain RPM range when I let off the gas.  I knew it had to be an exhaust leak and yeah, a blown out muffler is one hell of an exhaust leak.  I had plans to haul somewhere the following weekend so we over-nighted a muffler and had it installed that week.  Mufflers are consumable parts, this kind of stuff is just bound to wear out eventually. 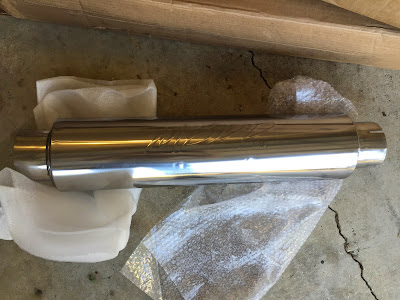 The Beast has a 4" turbo back MBRP system on it. 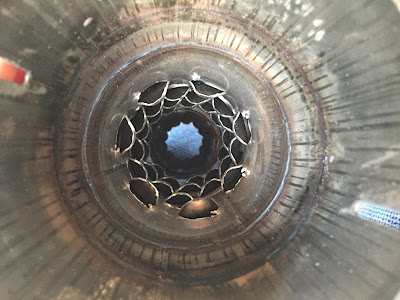 Awww yeah!  The Beast was about to be breathing easier with this thing!

I pulled out of the shop and started letting off the gas in 4th...The Beast was super smooth!  Then I rolled down my window and to my disappointment, I could still hear that damn rattle.  I should have turned around and taken it back to the shop but the rattle had no effect on how The Beast was driving.  I wanted to look at everything myself first.

We got home and I got under The Beast with a rubber mallet and hit everything I could get to and just COULD NOT replicate the rattle.  That made sense because the sound was something that was spinning so our best guess is something in the drive line, but the drive line was tight.  CV?  U-Joint?

I dropped The Beast back off at the shop this week and it turns out my annoying rattle was just some worn out u-joints in the driveline.  YESSS!  U-joints are like $20.  Then they told me they thought something else might be going on but they weren't sure yet.  The next day they called me back and said "Well, we found something else, and it's not good news."  FML.  The chain in my transfer case had worn a hole in it.  Then it turns out that actually the drain plug in my t-case had fallen out and all the fluid had leaked out.  The Beast has been running around, hauling horses on a DRY TRANSFER CASE.  If that isn't an advertisement for Dodge I don't know what is.  Do you guys know how impressive that is??????  That thing should have stranded me long ago and ate up its transfer case.  That thing just earned its nickname all over again.  It is THE BEAST.  The Beast doesn't care about a dry t-case. 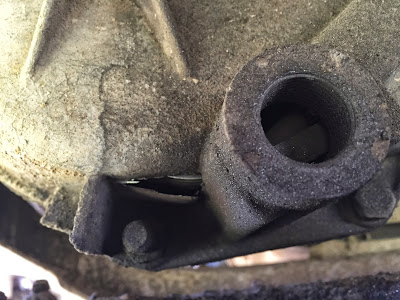 You can see the hole with the exposed chain, and the empty drain.  It looks like that drain plug fell out long ago.  Soooo The Beast has been running around for a while like that.  Unreal.  I love you Beast.

So, when I say in my last post that Mochs and I should just be thankful we didn't end up walking home, I MEAN IT.

How does this happen?  There's no way to tell.  The variables are endless.  Someone told me today I should be checking my fluid levels at all oil changes.  Well I check my oil regularly no matter what but checking tranny, t-case, diff, etc... fluid at every oil change would not have stopped this from happening.  What if the plug fell out between oil changes?  And I am sure it did.  I haven't had the t-case serviced since I bought The Beast because when I bought it everything had just been flushed and serviced.  So no shop has drained it since I had it.  There is no way I have been running around for coming up on four years with it dry like that.

A couple of things could have happened.  Either the plug was stripped to begin with and gradually worked its way out, or it wasn't put in all the way and gradually backed out from all the vibration of the truck on the road.  This is just one of those things that happens.  It sucks, and it's a $1200+ repair (t-case alone is $1,000), but this is some glass half full stuff right here, you guys.  This could have been much worse if The Beast ate its t-case with the trailer on and horses in it down in Florida on the side of I-75, in the middle of the summer, or something.  But it didn't.

Dodge just got a customer for life this week.  I already loved The Beast enough to never want another make of truck, now I definitely will only have Dodge trucks.  The Other Half ordered me a t-case this afternoon that will be here by the 1st, or sooner, so The Beast will be back to work soon!
Posted by The Jumping Percheron at 11:17 PM