XC Schooling at The Oaks 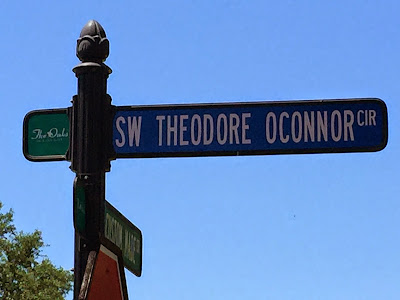 Last weekend a friend and I took our ponies to a hunter pace at The Oaks, which was built by the O'Connors (and later sold).  Hence, the address being at 211 SW Theodore O'Connor Circle.  It is a gorgeous facility and I LOVE riding there! 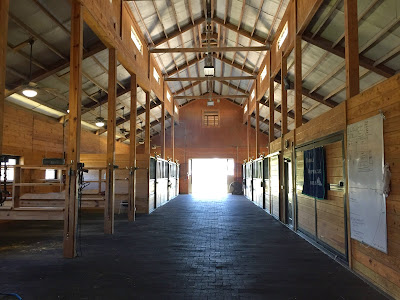 Part of their beautiful barn. 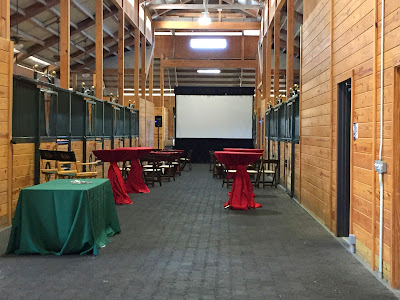 Setting up for the Derby party that evening.

We walked the course first.  We did Tadpole.  The whole idea was just to go have fun and make an easy confident day for the horses.  We decided weeks before we went that we were not there to care about what our time was.  It was just a great opportunity to run the ponies on a full course at a beautiful facility a short drive from home. 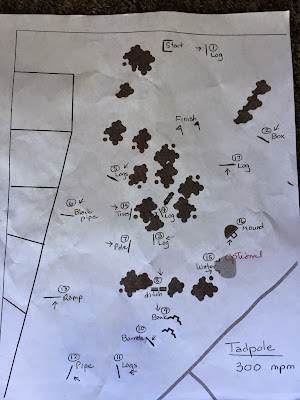 Our course map.  17 fences including a sweet water complex! 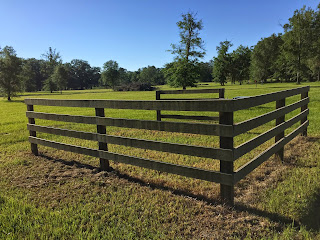 We told the timer not to worry about our time and we left the start box together with Mochs leading the way. 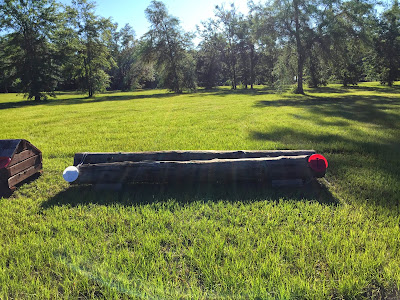 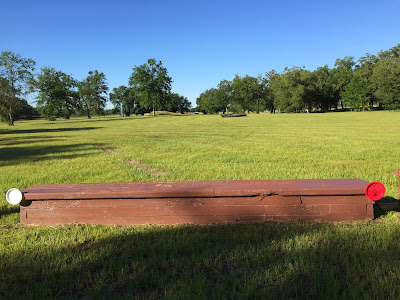 This one actually had a pretty wide spread for the height, and a sharp edge on both sides.  I should have taken a pic of the actual spread, but we both decided that we were going to skip #2.  This was another reason we told the timer not to worry about us, we already decided we were going to self-eliminate by skipping a fence.  If it would have been further out on the course we would have probably just rolled with it but, not as #2.  Not for the green ponies.  I actually almost said f it and took Mochs over it on our second run, but my friend would have totally called me out about not sticking to our plan (which is great).

Um...I was getting so excited about riding this course I completely forgot to take pictures of fences 4 & 5!!!!  They were essentially logs in the shady area of the woods that we had to gallop down into. 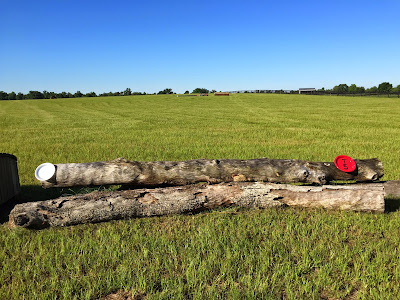 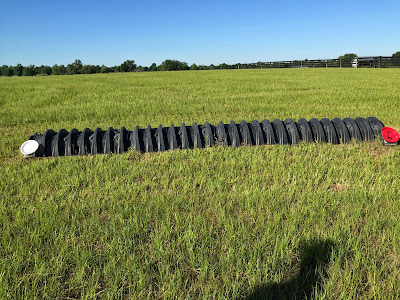 Mochs had a peek at this but went kept her forward movement.  The second time around she didn't care about it one bit. 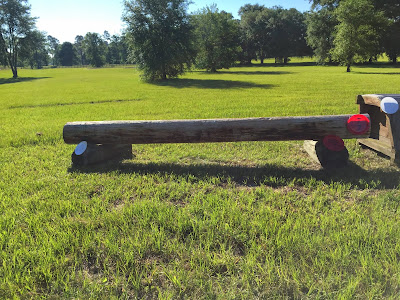 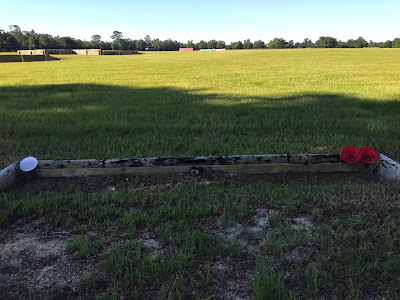 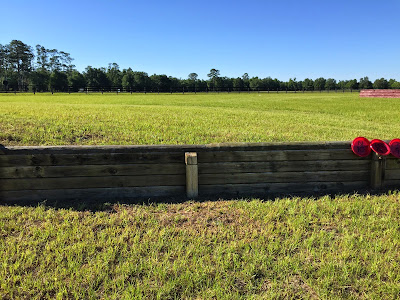 Mochs hesitated a tiny bit a couple strides out but I slowed her to a trot to make sure I gave her enough notice and she hopped on up and we galloped on.  This was the second bank she's ever schooled. 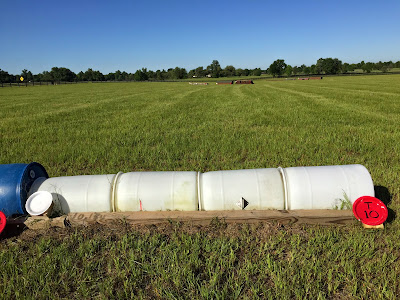 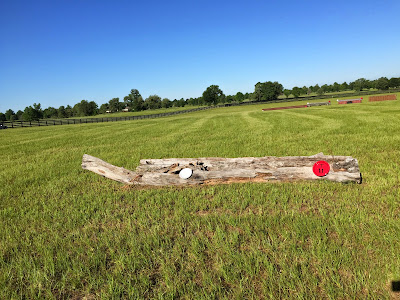 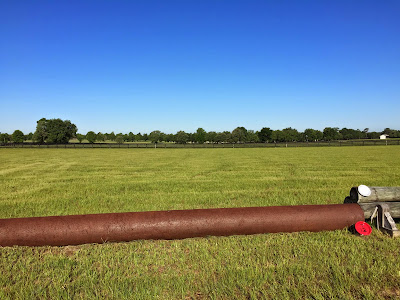 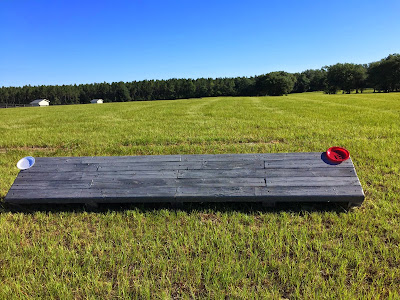 And here we are at a ramp that had the same spread as fence #2.  But this was #13 and we were just out cruising, Mochs was great to it.  If #2 was out here it would have been the same thing. 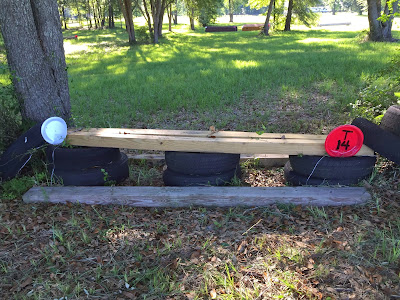 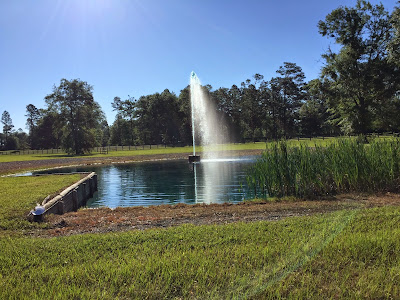 Water complex!  They have pictures in the office of Teddy schooling this.  I hope Mochs captured some of the Teddy spirit from treading on the same ground he did.  Moch spotted the fountain before we even started.  The organizers were nervous about turning it on with the horses out there.  I told them I hoped they did so that Moch would have something to be extra brave about.  I let my friend lead into the water both times because her horse wasn't really giving the fountain any extra attention.  Again I slowed Moch to a trot to let her have enough notice that yes, we're heading straight to it and IN to it.  She followed her friend in.  The first time we walked through, the second time we trotted through.  It's all good as long as you keep the forward motion! 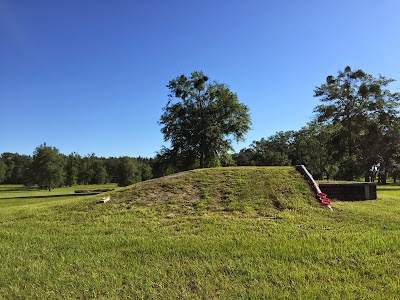 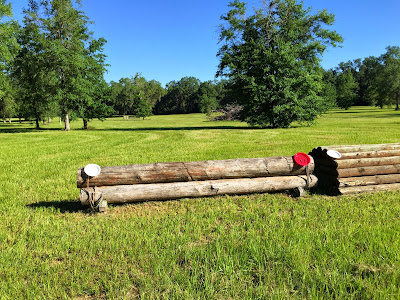 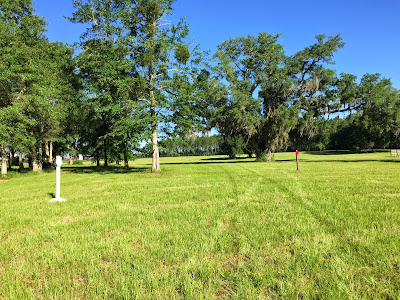 Finish flags!  We galloped through patting our ponies and praising them half to death.  There were other people out walking the course and they were probably like what in the hell is wrong with those two?!?!  We were SO proud!  SO PROUD.  Tiny jumps, but forward, brave ponies.  Both their first times schooling a full course.  After our second run we came through the finish and high fived each other.  A lady walking the course was cheering us on that time.  We were so ridiculous, but SO PROUD.

After that we were not about to be done riding.  Not on that beautiful facility.  We went and rode an additional 11 miles on their trails.  I didn't have my camera with me, unfortunately.  It was an awesome ride.  We ended up riding 13 miles that day.  We are doing a 15 mile intro endurance ride together next month.

Every time I ride xc there is always that one fence, or sometimes two that I am extra proud of for the day.  Something a little challenging, or maxed out.  Mochi had two that day. 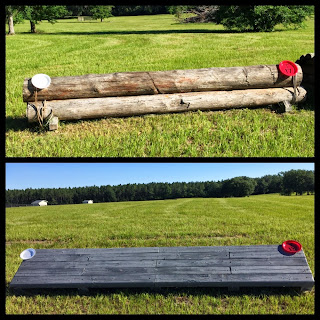 Our fences of the day.  The top one because it was over max height for the level, and the bottom for just being something new to Mochs that she didn't take any notice of.

As we were walking the course I was looking at the Novice jumps longingly and telling my friend it would be so much fun to have Klein out there too.  I have schooled that course with her and had a blast.  But my friend said that wouldn't be as fun as having Mochi out there and experiencing something new with her.  True.  So true.  I mean, it's always fun with Klein.  But I really am enjoying watching Mochi grow and learn.  I also am learning A LOT from her too.  She has fixed holes in my riding and made me a better rider just over the few short months she's been back in work.

We really had a great time.  It was super tempting to head for some of the BN fences during our two runs, but again, that would not be sticking to my plan.  Even thought Moch would, I'm sure, have been fine, it would have somewhat defeated the purpose of a confidence building, easy ride.  Moch couldn't have been any better. 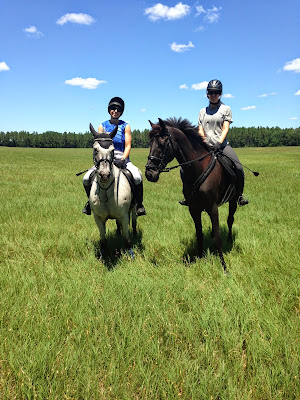 After this awesome time we had, we go to leave and had just pulled out of The Oaks.  I was only doing about 40mph when I heard a LOUD pop.  I started looking in my mirrors trying to figure out what just happened.  Nothing felt weird, the truck was driving fine.  I didn't see anything in the road, then...I noticed a flap from one of my trailer tires.  My left side front axle trailer tire had blown out.  We were in no spot to pull over to change it.  There was NO shoulder on either side of the two lane road we were on.  It was a ditch on either side and fields.  Nothing to pull into.  I knew there was a gas station about four miles away so I slowed to 30 mph, put my hazards on and limped my trailer there.  My friend was behind me so she did the same.  She also heard the tire explode from inside her truck...behind me.

We were about two miles from the gas station and I heard another explosion.  Great.  My tired exploded twice.  But it was leaking slowly, somehow, with two blown out pieces.  I just kept my eye on my mirror to make sure I didn't see the damn tire go rolling off the rim or something.

Finally we got into the gas station. 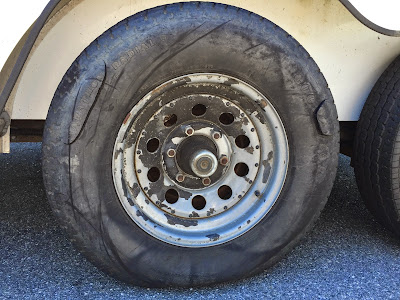 It's a miracle it was leaking so slow.  It was hissing when I stopped. 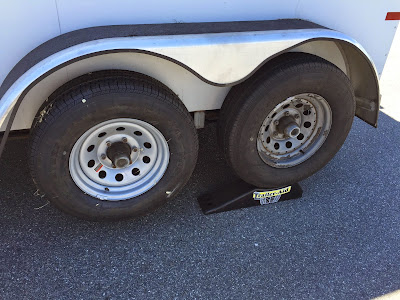 If any of you guys wonder about Trailer Aid, it works perfectly.  All I had to do was back my trailer up on the little ramp and it was more than high enough off the ground.  10 mins later and we were on our way home again. 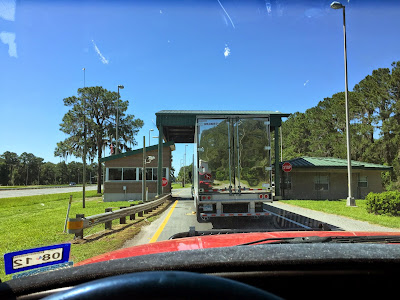 Pulling into the legendary Ag Station.  If you read blogs from people that ever go in/out of Florida you will have read some horror story about the Ag station.  You have to stop on both northbound and southbound sides.  They check your Coggins, Health Cert (has to be within 30 days but we have a special state permit that extends them because we haul into FL so much), and come out to match your horse to your paper work.  They actually scan your stuff into their system, with your driver's license.

I got out to re-tighten my trailer lugs, but everything was tight and good to go.  The tire that blew out was one of two that were the next to be replaced.  So, you better believe I took that blow out in as well as the last older tire in and had new ones put on.  I did the back axles just a couple months ago.  So now they are all new, the same, and I have two full size spares.  I have heard a lot of stories of people getting flats on trailers then 10 miles down the road getting a second flat.  Not me, I bought another rim from Sundowner.  Two full size spares buddy.  Never leave home without them.  It's amazing peace of mind putting a spare on after a blow out and not having to drive down the road thinking "OMG I have no spare now...hope I make it home."

Instead of being mad about getting a flat and having to spend $250 for two new trailer tires, I was the complete opposite.  I could not have been any happier that the tire exploded BEFORE we got on I-75 and were doing 70mph!  I was SUPER thankful for that.  It's not a matter of if, a matter of when.  Besides, nothing was going to ruin that ride!!!
Posted by The Jumping Percheron at 10:24 PM