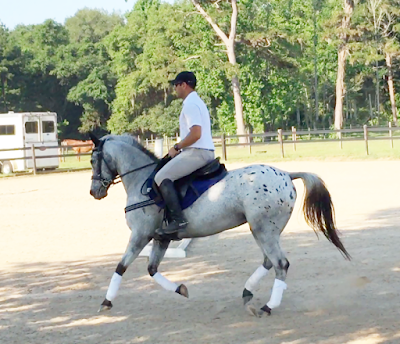 I took Mochi to school some more xc this past weekend.  Carlo Graziani just happened to be coming to town for the weekend at a nearby farm as well, so we stopped there first and I had Carlo put a training ride on Mochi.

I really didn't have any expectation of what would be accomplished in the training ride.  Carlo is awesome, he is the grand prix rider/trainer that Klein and I went to Orlando for to spend a weekend at his barn last February.

First, I warned him.  He asked me what I was doing with Moch right now to get an idea of where she was at.  I told him her story and told him that she has only been in serious work since the end of February after being a pasture pet for most of her life. 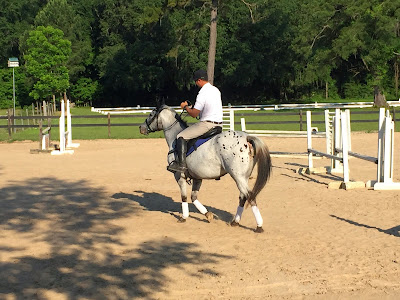 Carlo had just got on.

It took him about half of his ride to get her settled and connected.  That is just how she's going right now though.  Also, she really needs her running martingale on for jumping right now but since her breastcollar is being repaired she's out of luck.  I am pretty sure I have just a running martingale in her size around her somewhere, I need to look.

He had her connected and balanced in the trot and people were remarking how nice she looked and what a fancy little mover she is.  Then...he asked for a canter, and that all went right out the window.  Her canter seriously sucks right now.  She needs to find her balance.  We have been searching for it lately.  Actually, I think I found some of it this evening.  It was only a little bit, but I'll take a small victory. 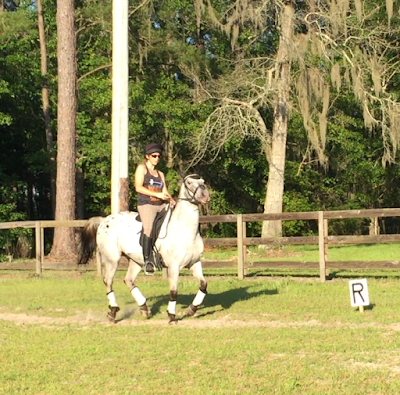 Back to the training ride.  He cantered Moch both directions and was just on her forehand and putting up a bit of a fight.  It was almost time for the ride to be over when he came up and said "She's a challenge!!!"  Oh Mochs...  He was like "She's barely broke!"  Oh boy, that's a tall order.  But compared to the caliber of horses in his barn, she is absolutely barely broke, it's a fair statement, no offense taken, feelings not hurt one bit.  He has nothing against anything not of that caliber, I mean he LOVED Klein and had a great time schooling her and said she was well trained.

He went on to tell me he has zero control over her at the canter and there's not much you can do at that point besides fix it before trying to jump anything.  *le sigh* I know.  Insert feeling slightly like an idiot for telling him I have been jumping her.  He said "She wears you out!!  You need something to help you with her, some kind of training aid, draw reins or put her on the lunge line in side reins first before you ride."  Well, the thing is, I HAVE went the route of longeing her in side reins a lot and that doesn't do much.  I would longe her several times a week in side reins to see if I could get her to settle into accepting contact a little more.  It didn't do anything for her.  This is actually the second professional to tell me I should try draw reins on her, and I did this week.  She was actually pretty magical in them, maybe they will help her learn that being busy with your head makes life harder.  She is perfectly fine otherwise, she gets adjusted by the chiro, has had her saddles fitted to her by a pro, teeth are good, etc, etc, so don't think I didn't question physical issues for this busy head nonsense.  She just doesn't know any better, and is in the process of learning better.  Somewhere along the way she has learned a bad habit.  I have gotten her settled at the trot, so the canter will follow with time.

I'm pretty convinced that hours and miles are the only thing that will really train this little pony.  I told Carlo that and he seemed relieved to hear it, to hear that taking a lot of time with Mochi was in the plan because it's what she needs.  I have all the time in the world for my little pony, she's not going anywhere and has no looming deadline of be trained or be sold.

He did say he would jump her a few times just to see how she was.  Ahem...she really needs her running martingale.  She threw her head up a couple times coming to a fence but she was willing to go over anything.  After jumping a couple fences he brought her back to me and started apologizing for not jumping her more.  This is part of why this guy is successful, he is so humble despite being such an accomplished rider and trainer.  I told him look, I had no expectation when I unloaded her.  I love the way he rides and if he just wanted to walk around and work on her halting I would have been just as happy.  I told him he is the pro, not me, and I was happy with him doing whatever he felt like Mochi needed that ride.  I had to tell him several times not to be worried about not jumping her more. 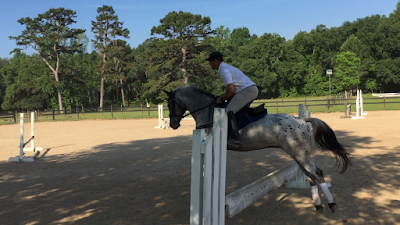 After that ride we headed out to the next farm 25 mins away.  The whole drive I thought about him saying "She's barely broke!" and wondered if I should just take her home and reevaluate my approach to training her.  Actually, it made me feel a little better that he didn't ride her any better than I can.  Plus she's learning little tricks like to halt, for example, all I have to do is take a deep breath and let it out and the brakes immediately come on.  She is so sensitive to it right now that I have basically brake checked myself because I did it on accident and she halted.  That is one trick that helped our down transitions today with our canter work too.  I made sure to take a deep breath in right before I half halted and asked with my seat and she got it.  It helped the light bulb go on for what I was asking for.

Back to wondering about if I should still take her xc that day.  She has such a fun time, and I can manage her.  She actually seems to do better if you just let her go and not correct her over and over.  Just GO, put the miles on.  Make things seem like no big deal and she doesn't turn them into a big deal either.  Plus, we're talking about the Tadpole xc course here people...like 2'3" or under.  That's pretty harmless and it's not like she's out there running into things.  She clears everything and the couple BN fences we've went over she's just fine over too.  This is part of our miles I was talking about.  She needs to get out and just get miles.  She can handle it mentally too, she's super brave and will gallop to anything you point her at.

So, we went for it, and we had SO much fun!!!!  The next post will be full of pictures from xc and some video from my helmet cam.
Posted by The Jumping Percheron at 10:51 PM