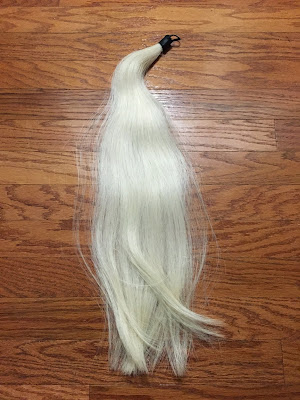 My Klein baby has a weave...

Klein's fake tail showed up, finally.  I am hoping this helps her protect herself from the little gnats that just irritate the living hell out of her all summer.  It doesn't help when her bug defense is cut in half...literally.  Poor girl has a docked tail.  I can't count the amount of people that have asked me at shows "Why do you keep her tail so short?  Did her tail get eaten?  What's wrong with her tail?!"  Um, it's docked, people.  Docked means part of the tail bone was amputated when she was a foal.  It's common practice among draft horse breeders, and actually outlawed in some areas now, for obvious reasons. 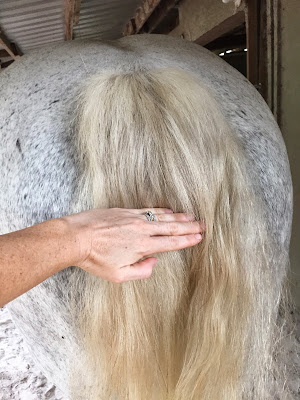 My hand is showing where her tail bone ends.  It is literally 1/4 the length of a normal tail bone.

There are various ways they can dock, I did not ask when I bought Klein because I didn't want to know how it was done.  It didn't matter, her tail was already docked, she was two, so it happened a couple years prior.


When she really gets carried away in the summer she swishes her tail so violently she actually gets bloody spots between her back legs where her tail is essentially lashing her.  It breaks her skin open.  I was really hoping this tail would cure that because that just breaks my heart to see.

Docked tails all grow differently.  Wes' grows a little longer, and he is also significantly less bothered by bugs. 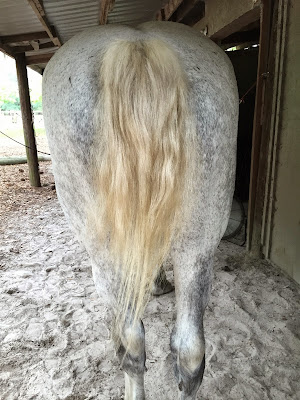 This is about as good as it gets, as far as length.

Here is how I attached the tail: 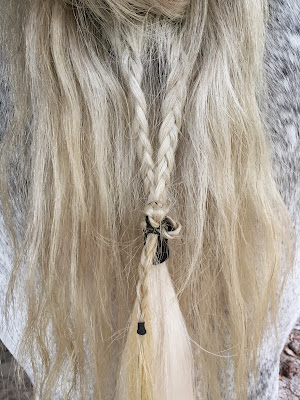 It's not pretty but it's functional.  Since I'm not showing Klein during the summer it really doesn't matter.  If I was, I'd just take it out for the show, then put it right back in when we got home. 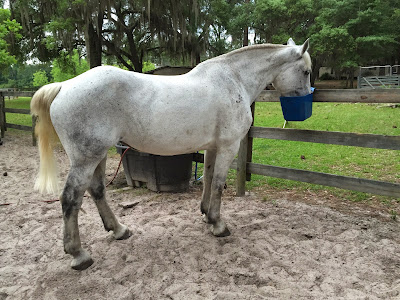 Klein with her tail extension in.

It has been in for about a week and it has been a complete success!!!  The area between her legs is healing up with no new open spots and she has that much more length to defend herself against annoying bugs.  I washed it yesterday while giving her a bath and it washed just fine too.  So far so good.  I will probably also buy a back up in case something happens to it.  It took about three weeks to delivered, so I'd rather have a back up.