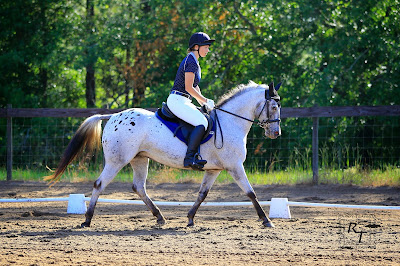 Well, the show didn't go as planned.  Moch and I ended up going home early because something was just not right with her.  After xc we scratched and got out of there.

For dressage I decided to ride in my jump saddle because she seems to go a little better in it at the canter.  So, to make things easier for the both of us I decided to not ride dressage...in her dressage saddle.

We did a short warm up.  I can trot around all morning but as soon as we throw the canter in there (right now) her trot is highly likely to go to shit.  So, we pretty much warmed up for 15 mins and cantered once then headed in the ring.  The ring was running early so why not?  We were as warmed up as we were going to be!

Mochs actually really surprised me in the dressage ring.  I was very happy with her.  Remember I said it would not surprise me if we got a 2 on our canter and canter transitions, well we got a 5, haha.  Moch gave me her best.  We got a 44.47.  Klein is getting in the 20's two levels higher.  I don't remember the last time I got above a 40 but atleast I pretty much knew that is the kind of score we'd end up with.  I couldn't care less.  I was SO happy with Moch for just going in there listening, and not being distracted by other horses, the judge's booth, or spectators.  She contained the wild pony beast within and acted like a domesticated pony for a few minutes!

We did manage a couple 6.5's.  Most of the judge's comments mentioned Moch being tense.  You can see it in the first picture of this post.  She needs to release at the base of her neck.  She'll get there! 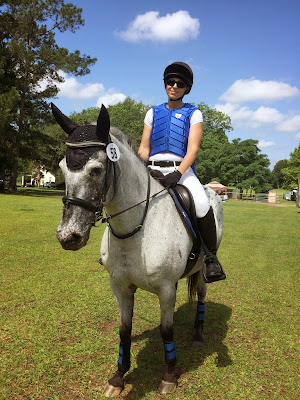 I got my replacement five point for her from Harry Dabbs this week!  She needs that thing!

XC, I thought we were in the clear after dressage.  We schooled that entire xc course last weekend and Moch did not have one ounce of hesitation in her.  She hasn't had any yet during any ride that we have jumped.  She is super forward and rushy.  For some reason, that pony left the building.  Moch stopped a couple times.  I have no idea what got in her mind.  The xc fences did have decorations and extra natural elements but she normally doesn't take much notice of things like that.

We finished xc, but with her just not being herself I cooled her out, untacked, hosed her off and then went to scratch.  The LAST thing I want is this super green pony not having a fun time and then forcing her to do stadium and deciding shows suck.

We didn't have that great of a school Friday morning.  She was a handful and a half.  I had a running martingale on her and a piece had broken off and allowed the forks to slip down so it was a little tight on her.  I didn't notice until the end of the ride.  She is a sensitive pony and I wouldn't put it past her to have felt a little trapped that morning and then have that in her head the next morning at the show.  So maybe she lost a little confidence since that school was the morning before the show, she may not have forgotten about it so easy.

Either way, there's a 3 phase show around here every weekend.  We can take our pick any weekend we feel like at a variety of venues.  The plan is to put some more confidence in her, strengthen her and get back out there.

In the grand scheme of things, we should just be incredibly thankful that we did not end up walking home after what the shop just found on my truck this week!  That's for another post though...
Posted by The Jumping Percheron at 10:45 PM