Lately Klein and I have been working hard on refining her ability to be adjustable.  She come back when you ask, and she moves out when I put my leg on.  There is a distinct difference but there's still some need to refine it.  I'd like her to have a bit more come back to her more to help her re-balance and become just a little more upright and carry herself a little more. 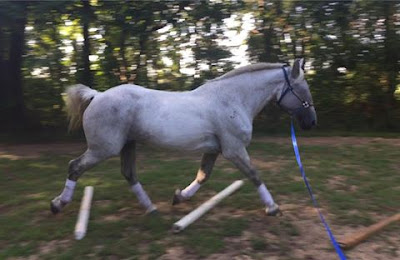 This was from this evening.  We schooled xc yesterday (video and helmet cam heavy post coming) so the next day I always take her for a light hack or put her on the longe line to stretch her out.

What turned this light bulb on is her tendency to get a little heavy down the long side on the dressage ring at the canter.  I think sometimes that when I taught her to lenghthen at the canter on the long side she has a little too much fun with it and she sometimes tries to just go for it.  When I half halt her whenever we make that turn onto the long side there is a bit of delay that shouldn't be there, and it should not have taken me this long to put some real concentration into fixing that.  So, we're fixing it now.

This of course also all translates into jumping, not just flat work.  Klein does well when she has visuals too.  For example, this past week I set up two very small verticals that were 15ft apart.  That allows them to either be a bounce OR a one stride.  She easily understands that she can make that a bounce.  It took her the second time through to get to it on a really short stride to make it into a one stride but she got it.  After that I rode through it on each lead at random and would randomly bounce it and randomly make it a one stride so that she had to listen and couldn't guess what I was going to ask her to do with it.  Things like that make sense to her.  She has an obstacle to get to and understands that I'm asking her to do something because it relates to that obstacle.

I did the same thing with ground rails and a line of cavaletti the next day.  I had the ground rails in a fan shape so they would be on a turn.  I asked her to shorten her stride so that she could make it through the ground rails at a canter, correctly.  Again, she totally got it.  The cavaletti were spaced at 6 ft apart and I was planning to use them only at the trot but half way through I started to wonder if I could get her to make her stride short enough should could canter them.  It took about three tries but, she got it.  She would canter the first two and jump the last two, most likely because that's much easier than sitting back and using some serious balance.  I knew it was hard for her so once she nailed it twice, that was good enough on that exercise. 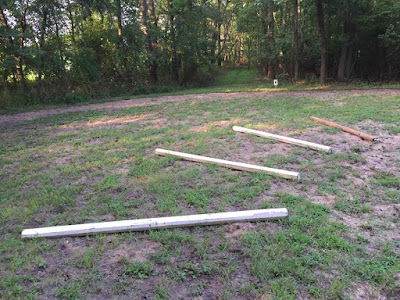 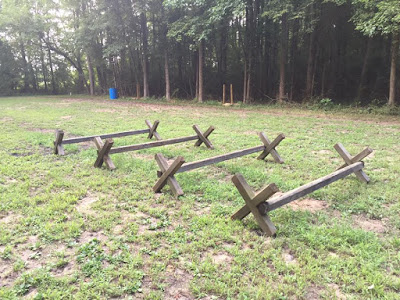 I'm a really word-associated person with riding.  Things that instructors tell me to visualize stick with me.  Also, sometimes I can just THINK about making a movement and Klein begins to respond.  We're coming up on ten years together so I'm sure that has something to do with it.  For my short strides I would think "short choppy, short choppy, make her walk."  The "make her walk" thing is something Lainey told me in our dressage lesson a few months ago.  It definitely helps.  It helps me to make sure my core stays engaged so that Klein knows what I am asking.  Also, if I let any of that core engagement go, Klein will think "well, I thought you were asking me to shorten but...now I'm confused?"  When we lengthen again I think gallop because one dressage instructor told me that a few years ago.  Of course we're not hand galloping around the dressage ring but it helps (me) to make sure I show a difference, ride uphill, and allow Klein to MOVE.  She would say "think gallop, think gallop," so I do.

I'm really happy with these rides lately.  This is one area we can always improve in.  I mean, who would have thought a full draft could fit her big butt through a 15ft space while putting in a stride? 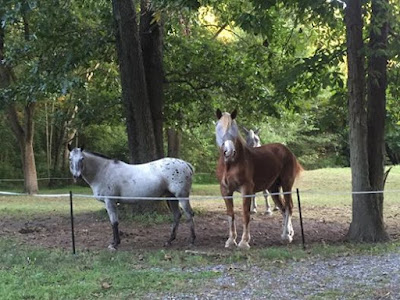 And this is just because these guys crack me up.  The Other Half and I had to run an errand this evening and when we came home they were at the other end of the pasture, but walked down to give me the stare down because it was slightly past pony dinner time.  As I was getting out of the car I felt eyes and I turned around to this. Ha!

Speaking of The Other Half, he has got Wes running to him when there's a giant horse fly that lands on him because he KNOWS The Other Half will come to his rescue and smack it.  When he sees Wes trotting around scraping under every branch he can find we know there's one on him and The Other Half will run out the front door saying "Hold on buddy!!!!!!!"  Yesterday evening Wes came trotting up to him while we were out cleaning up and turned his butt toward him because one had landed on him so that The Other Half could kill it.  This is the kind of stuff a true Horse Dad is made of.
Posted by The Jumping Percheron at 10:28 PM