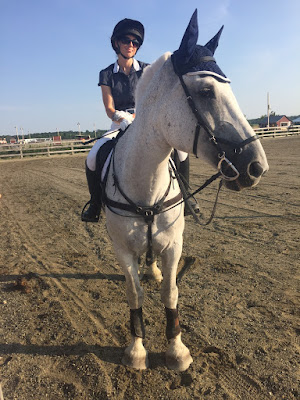 Last month Klein and I were invited to do a demonstration for the draft horse feature at the Burlington County Farm Fair.  We were happy to!  That sounded like a lot of fun and a great way to show the general public what else a draft horse can potentially be capable of. 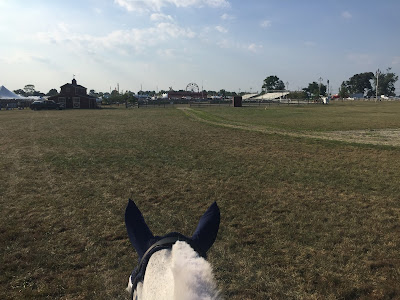 Always up for adventures! 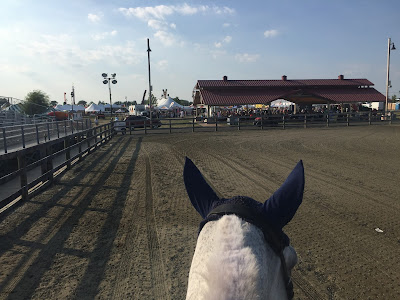 They set a couple jumps up for us and we galloped around the ring, jumped, and did some other flat work as the announcer read a one page narrative about us.

Klein was absolutely hilarious.  I think most everyone that reads this blog knows she has never driven.  I got her when she was two and she has never known anything but being a riding horse.  The trailer we parked next to unloaded this drop dead gorgeous blonde Belgian gelding who was already harnessed.  Klein looked at him like..."Mom, WHAT is he wearing?!?!"  It was too funny! 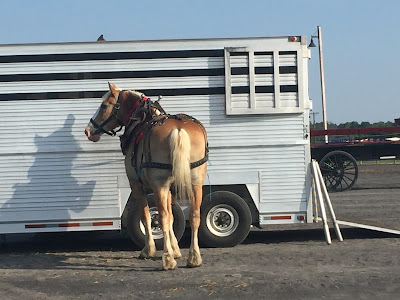 Isn't this guy handsome?!  He brought back a flood of memories from driving Wes in his glory days.

We headed over to check out the ring before they hitched him, so when he came to the ring with the wagonette she was even MORE confused!  Then a team of mares came in after him and that just compounded the confusion. 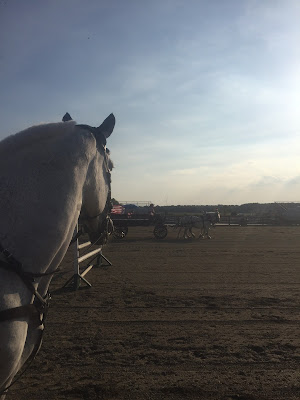 Klein could make no sense of this team. 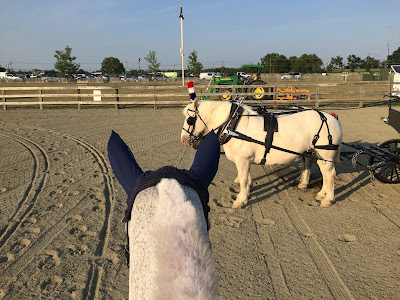 After she was convinced they were in no distress she was ok with it. 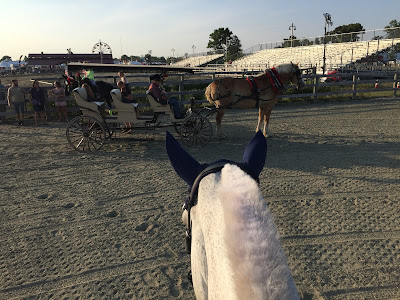 Same with this guy.  His name is Joe, and I would have loved to just loaded him right on my trailer that evening.

It was the most opposite thing ever.  Here's my Percheron watching her fellow drafts doing what she was bred to do and she could not figure out for the life of her what was attached to them!  She was super suspicious of them the whole time.  I think it added to her confusion because the things that were attached to these horses didn't appear to be hurting them and they didn't seem to care.  She was SO funny!  She just stared and stared and kept an eye on them the entire time.

Afterward, people wanted to take pictures with us and ask about Klein and all the places we have been.  Everyone was super nice, the spectators and the organizers.  One organizer asked if she could keep my information for future events and I said please do, we'd be happy to come out and have some fun with our fellow drafters at future special occasions! 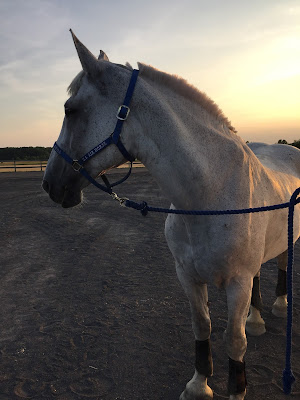 My girl, the perfect breed ambassador, also the prettiest thing 24/7.
Posted by The Jumping Percheron at 9:19 PM