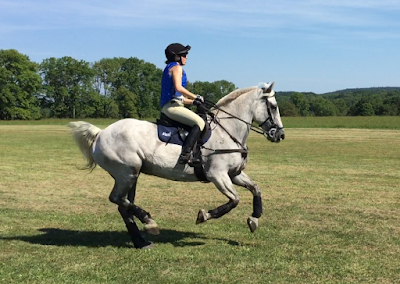 I have wanted to go to Buck's County Horse Park for a while.  It looks like a nice place to ride with plenty of room and I knew they had xc up to Training.  They do run a Training/Prelim division that is Prelim dressage and stadium with Training level xc that has Prelim questions on it.  They also hold recognized horse trials there.

We finally made it last Saturday.  It was still pretty warm that morning so I didn't gallop Klein too hard since we had to be out in the heat.  It was a bit more dry over there, so that helped.  Klein felt great.  She was up for whatever I pointed her at she always is.  We really only schooled a couple Novice fences and the rest were all Training. 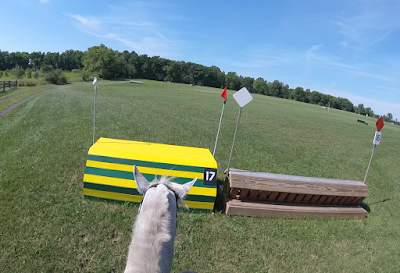 At first I could not figure out for the life of me WHY there were fences that looked like Training level yet had these black numbers on a golden background in addition to the normal black with white numbers that Training is.  Then it finally occurred to me, THOSE are the T/P xc numbers.  Duh. 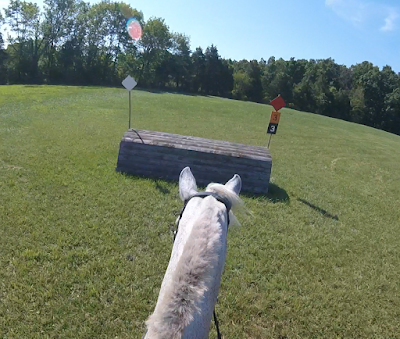 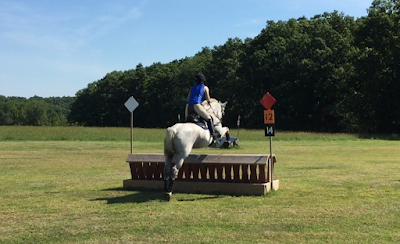 Anyway, Klein warmed up great and off we went.  There's plenty of gallop room there and also some spots where the trails go through a wooded area with xc jumps along the way.  There were a few other riders around.  Some were trail riding, one jumping intro xc jumps, and a few more playing polo.

It is mandatory to have a ground person there for jumping, so The Other Half came along.  I know getting up early to go take video and wait around on me wasn't his first choice when he could have been sleeping in, but...he did it anyway because that was the last day to school there for a few weeks due to the recognized HT coming up.  Klein is my teammate, but so is The Other Half because of things like this.  So many things he does or helps me with makes it possible for Klein and I to be out doing whatever we want to, and I never, ever forget how lucky we are for one minute.

There was nothing particularly tricky out there at Buck's County.  I did like that some jumps were hiding in the woods or in really shady spots so that they would come up quickly on us.  Klein mare didn't care.  There was one Training level oxer in a nice shady spot, you'll see it on the full helmet cam video toward the end.  There was also a half coffin, which was nice.  It was Training, but those can show up on Novice courses as well, we've had one at Chatt Hills on the Novice xc.  Klein has never cared about them one way or another but it's been a while since we've had a chance to school one and her thoughts about them haven't changed.


The water wasn't filled, but there was enough to make a little splash (click to play):


Our last little run was definitely my favorite and I was super proud of her for it.  I'm really not sure why I had her to the right on that log.  I didn't even realize it until I saw the video.  I also could have re-balanced her a bit better coming down to the yellow and green table, but she got it done and it was super fun! 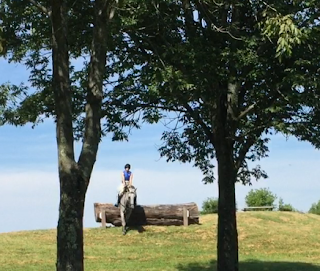 I didn't realize there was this much of a drop on the back side until I saw this.  Landing off of that was straight down hill, as you can probably tell in the video. 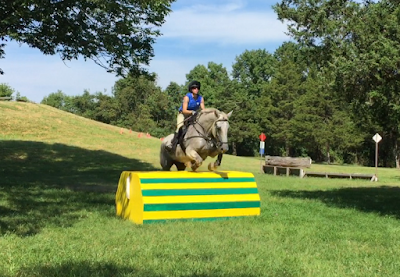 She would have gotten a better jump over this if I would have helped her out a bit more.


I put together a full video of all of my helmet cam clips from the day too:


The next day I was going take her for a hack to stretch her out, but something came up that evening and took some of my free time so I put her on the longe line to still get her stretched out and see how she looked.  She looked just fine like always and full of it. 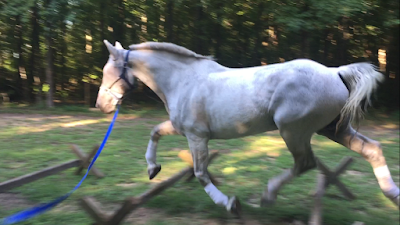 The longe line has never, ever been her favorite.  She always has an opinion about it.  She ALWAYS has to let me know, she'll do it because I'm telling her too, but she doesn't LIKE it.  I mean, here's a great example of that when she was six: 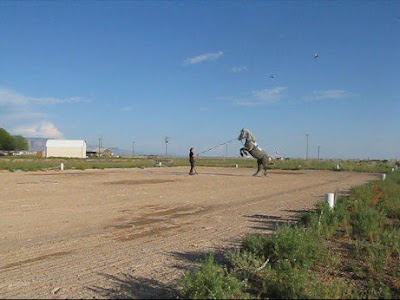 What do you do when 1,500 pounds stands up like this?  Nothing.  You act like it didn't happen and keep them doing whatever they are supposed to be doing on the longe line.  Or at least that's what I always did, and it worked for me, but it may not work for every horse.  Anytime she would have a fit, I just wouldn't acknowledge it and she learned really quick it was a waste of her time to act silly like that.  All it did was make her stay on the longe line longer.

Why that little side track?  Well, because this exact evening after Buck's County, Klein threw a fit about being on the longe line.  She decided she would bounce the first two cavaletti, trot the last two, leap in the air like a Lipizzaner and squeal then come around and trot through the cavaletti line PERFECTLY.  The Other Half is my witness.  He was standing out there with me and saw the whole thing and we both just started cracking up.  She is SUCH a smart ass sometimes!  That was her way of telling me she'll do it, but she doesn't LIKE it.  I wouldn't trade her for the world though.  Smart ass tantrums and all, that's my girl!
Posted by The Jumping Percheron at 8:25 AM