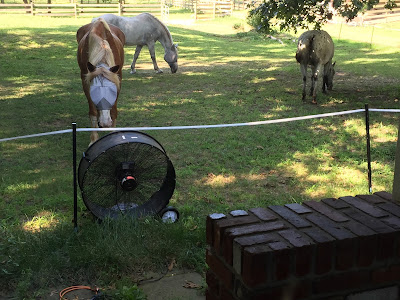 View from our front door.

It has finally gotten South Georgia Hot here, meaning the heat and humidity are in full effect and making life slightly miserable.  When it gets like this I have to get really careful with Klein's work because the heat and humidity is a little extra rough for the big ponies.  Remember she got a mild case of anhidrosis as a parting gift from South Georgia last year too.  Our vet there said that it was really a hit or miss thing if she would have an issue from there on out.  The summer down there last year was extra brutal and there had been a rise in anhidrosis cases in the area.  We had been there for almost 3.5 years at that point and Klein had never had any issues.  It just came out of nowhere one day.  I noticed immediately one day that she wasn't sweating on her neck like normal and that she was only sweating under her tack.  One AC fixed her right up.

I had been debating on putting her back on it when the heat and humidity showed up this year up here but I really wanted to see if it would come back or if it was a freak thing and she was a victim of the extra nasty summer in the south last year.  I'm happy to say she's had NO issues up here.  Even with this oppressive heat that has come in the past couple weeks, she is working in it with no problem.  We have been under several excessive heat warnings that have lasted for days at a time recently.

Now, I do sit around and wait until the least nastiest part of the evening to ride her.  It's not like I'm out there in the middle of the day with the sun on full blast.  I'm not doing that to her, period.  I have thought about riding before work but the humidity is higher in the mornings so we stick with the evenings.  As soon as she's done working she's being hosed off and standing in front of a big fan within five minutes.  She also gets sprayed or sponged down with liniment that has alcohol in it.

Wes is definitely not enjoying this nasty weather lately.  My poor Canadian polar bear is out there drenched, yet...stands in the sun when our pastures have a TON of shade.  We have been hosing them all off in the middle of the day when we are home or in the evenings if we've been at work all day.  Mochs is from South Georgia so she's used to this kind of weather, though she was drenched the other day as much as the drafts were.  Last Saturday was just extra disgusting. 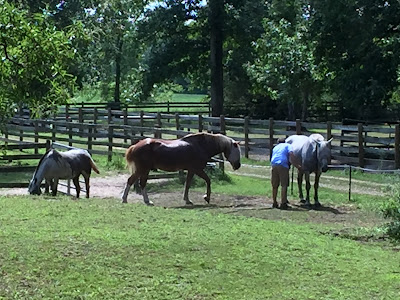 The Other Half hosing ponies off, because that's what good Horse Dads do on hot summer days before we leave to run any errands for ourselves.

Here's Wes in front of one of the fans after I hosed him off for the second time that day (click to play):


And the next day, The Other Half had the awesome idea of putting another big fan we have by the front paddock so that Wes could graze and stand in the fan if he wanted to instead of standing on the porch of the barn.  Here's Wes enjoying that set up (click to play):

And in today's edition of Wes and His Fan, @chepms3 once again proving he is the best horse dad ever by putting another one where Wes can have a fan AND graze instead of standing on the barn porch. #Wes #wesishome #Belgian #gelding #notacountry #hesnotaclydesdale #retiredcarriagehorse #drafthorse #retirementlife #summersucksforcanadians #horsesofinstagram #fan #summer #hot #jumpingpercheron #blog
A video posted by Stacey C (@jumpingpercheron) on Aug 14, 2016 at 7:23am PDT


Also, on these extra hot nights, the ponies get some cold ones in their grain. 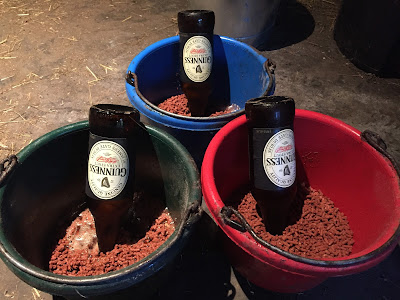 I grabbed Guinness the other evening, but the do enjoy Coors Light, Miller Lite, PBR, Bass, some random dark beer we had in the fridge with dead presidents on it, and whatever other random beer people that come over leave in the fridge.  I gave Klein a good amount of Guinness in the first couple days of her anhidrosis issue while I was waiting for One AC to show up, but it didn't really do anything for her as far as triggering sweat.  But, they love their beer as a treat in the dinner so they continue to get it once in while.  Let's hope this heat and humidity breaks soon!
Posted by The Jumping Percheron at 10:59 PM