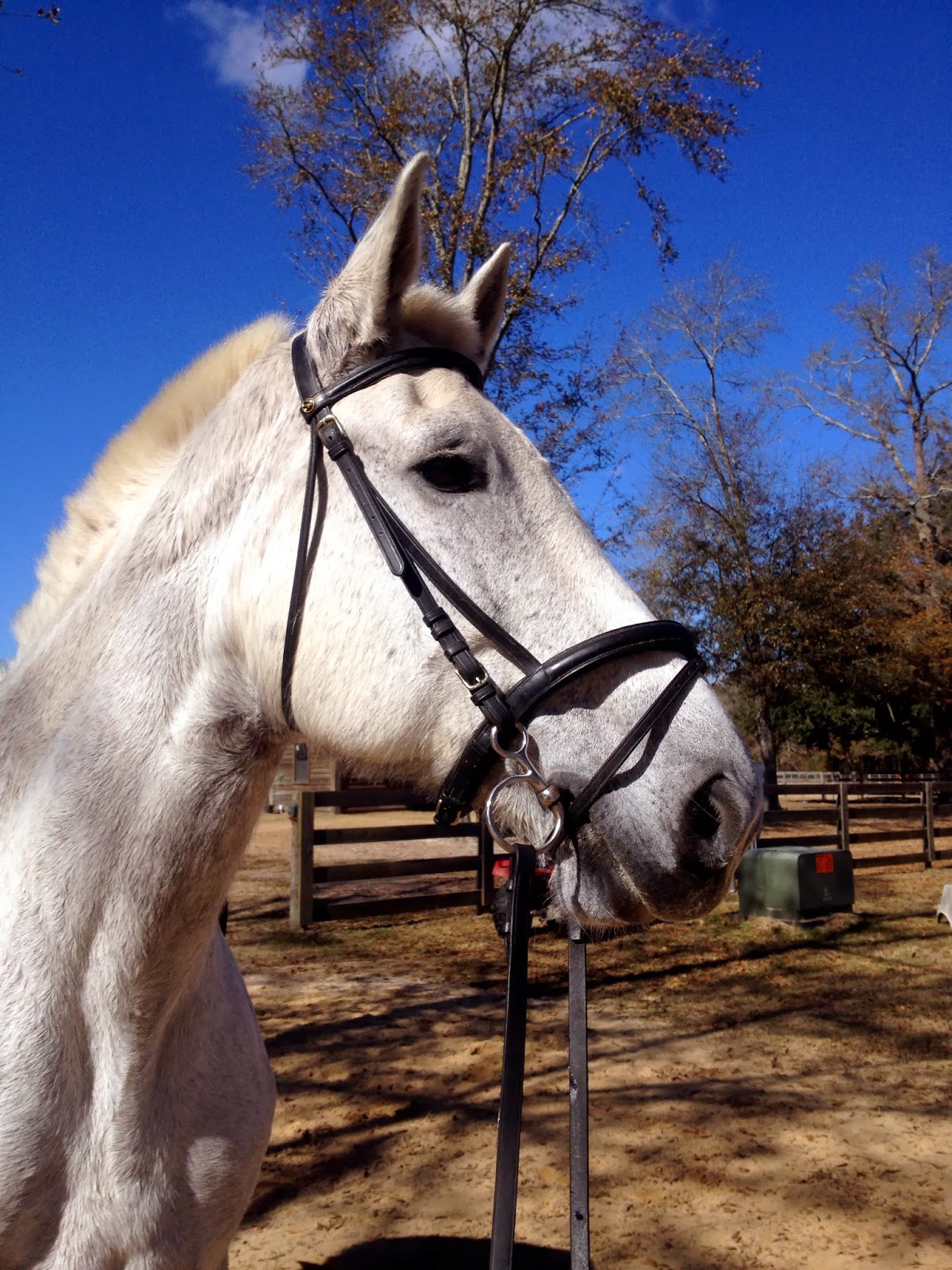 Trying to figure out what the monsters in the lake were.

The weekend before last was a three day weekend so Klein and I took advantage of that.  Sunday we went to a friend's barn to ride.  We stayed out about two hours and hacked around and had some long trots and canters.  It's pretty funny every time we go to this particular friend's barn because ALL the geldings have to come to the fence and stare when Klein walks by, then they follow her with their heads over the fence.  It's the big butt, they love it.  They can never stare at it enough. 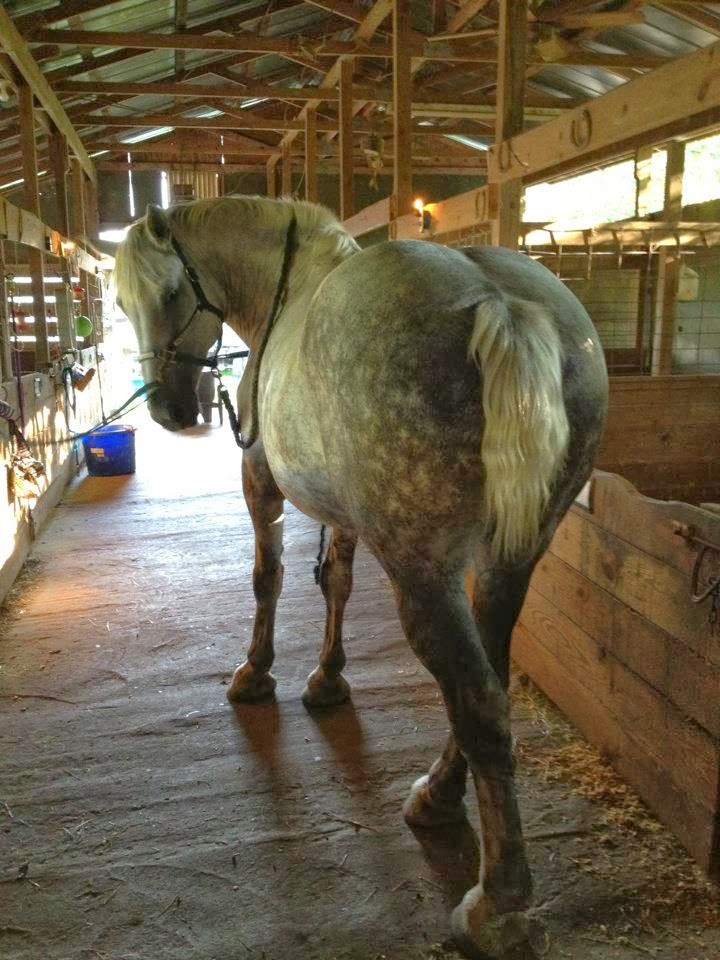 She knows.  Flaunt it if you got it, I guess.

One gelding that we rode with, Monroe, is just totally infatuated with Klein and it is adorable!!  If she sneezes, he sneezes.  If she trips, he trips.  I approve, Monroe is tall, red, and very handsome.  Will the OTTB just kept following Klein along the fence when we would ride by him.  He's another tall, lanky, red fellow.  Klein gets him all stirred up every time.

There is a small lake on the property next to that barn and that day people happened to be on it in boats.  Klein saw them and had a hard time making sense of what they were.  She was SO worried about them!  I felt bad for her because you could see the confusion.  Saiph, this next part is for you.  When I went to load Klein to go home she wasn't having it.  She was just being RUDE.  She loaded in 30 seconds that morning.  But now she didn't want to load because she would lose sight of the monsters on the lake.  It really wasn't her fault, she was genuinely concerned and getting pissy because I wouldn't acknowledge the monsters.  So, a friend had to help me.  As usual she stood behind Klein with the lunge whip in one hand and just raised it and Klein loaded but was still fussy on the trailer.  As soon as I got her moving she was fine.

The next morning we were planning to go road hounds with another friend at Live Oak Hounds in Florida.  I wondered if the fit she threw the day before would carry over to that morning.  It did.  She was being a problem to load.  I texted my friend and said I didn't think we were going to make it on time to go out with the hounds.  I was alone and I was about to call my barn owner to come out because guaranteed with two people she always loads immediately as long as one stands behind her and just has a lunge whip in one hand.  You don't have to do anything with it, all she has to do is know it's there, it's the weirdest thing. Whatever works.  But I didn't call my barn owner because what if I'm some where alone trying to go home and she doesn't want to load?  I can't call anyone to come out and help me.  I decided I had to win this battle by myself.  It took about 45 mins.  A couple times I just sat on the edge of my trailer and had a conversation with Klein that went something like this "Klein, we're not going back to where the monsters in the boat are.  Have I ever taken you somewhere and you didn't have fun?  What is going on this morning?  You like riding with Leslie, I PROMISE that is where we are going this morning.  What happened to my girl that loads in 30 seconds?  You've been to Hawaii and back, come on now!"  I just kept walking her up to the ramp of my trailer and she'd put her front feet on the ramp then I'd tell her what a good pony she was and I'd turn her around and walk her up to it again.  I think she got tired of that and finally she just walked on like she always does.  Silly girl.

I have no idea how, but we made it to Live Oak Hounds with about three mins to tack up.  I don't speed with my trailer and the roads are really narrow going down there, so you really couldn't speed if you wanted to. 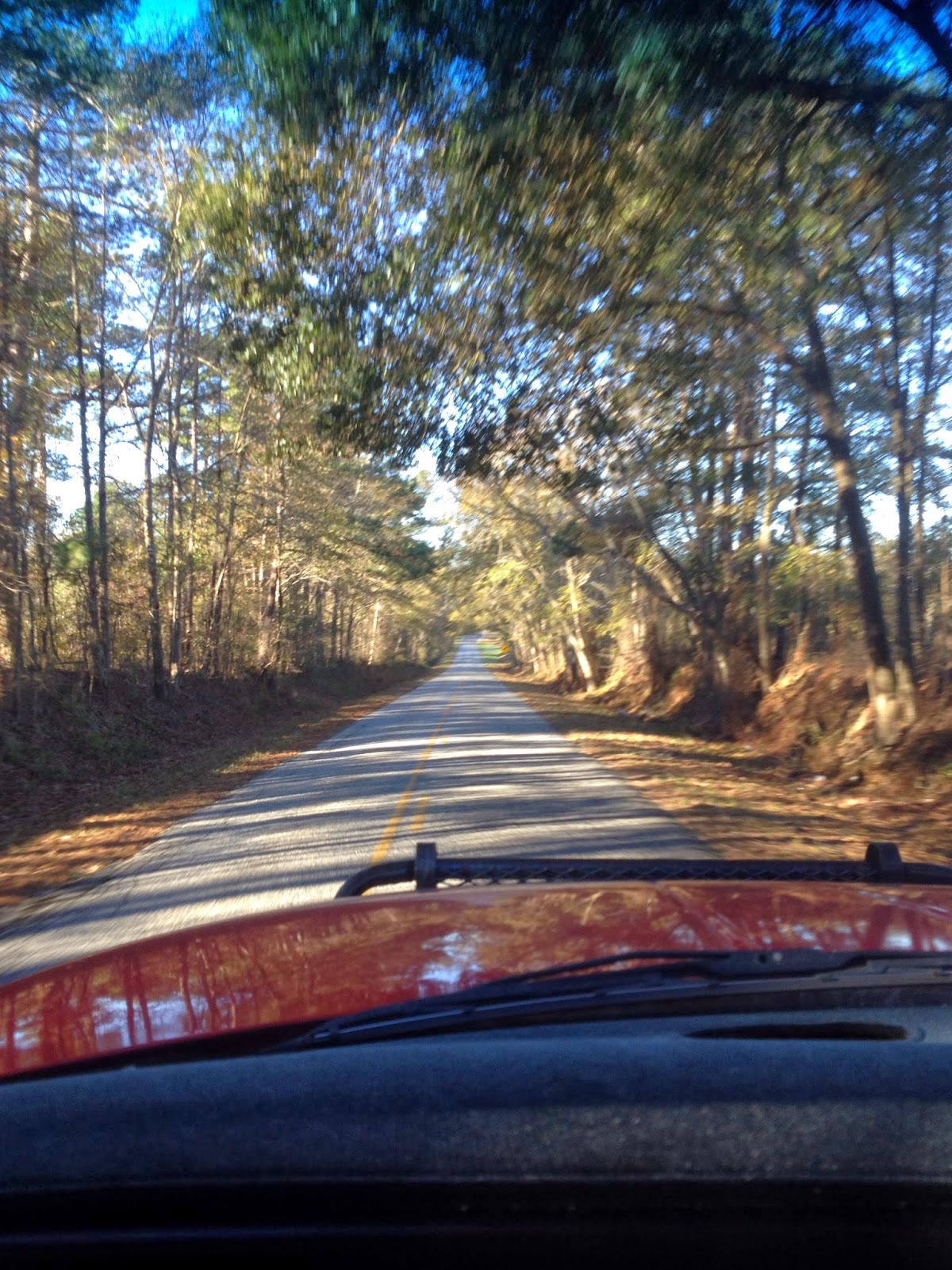 I think I forgot how close it really is to my barn, which means we'll be going more often.  After tacking up in about two mins and 45 secs we headed out.

Klein had never been roading before.  Last time I took Moch.  Moch had a blast.  I knew Klein would too.  She did, she LOVED it.  She was SO excited to be out with the hounds!  We went out with 132 hounds that morning.  Klein wanted to be up as close as she could to them. 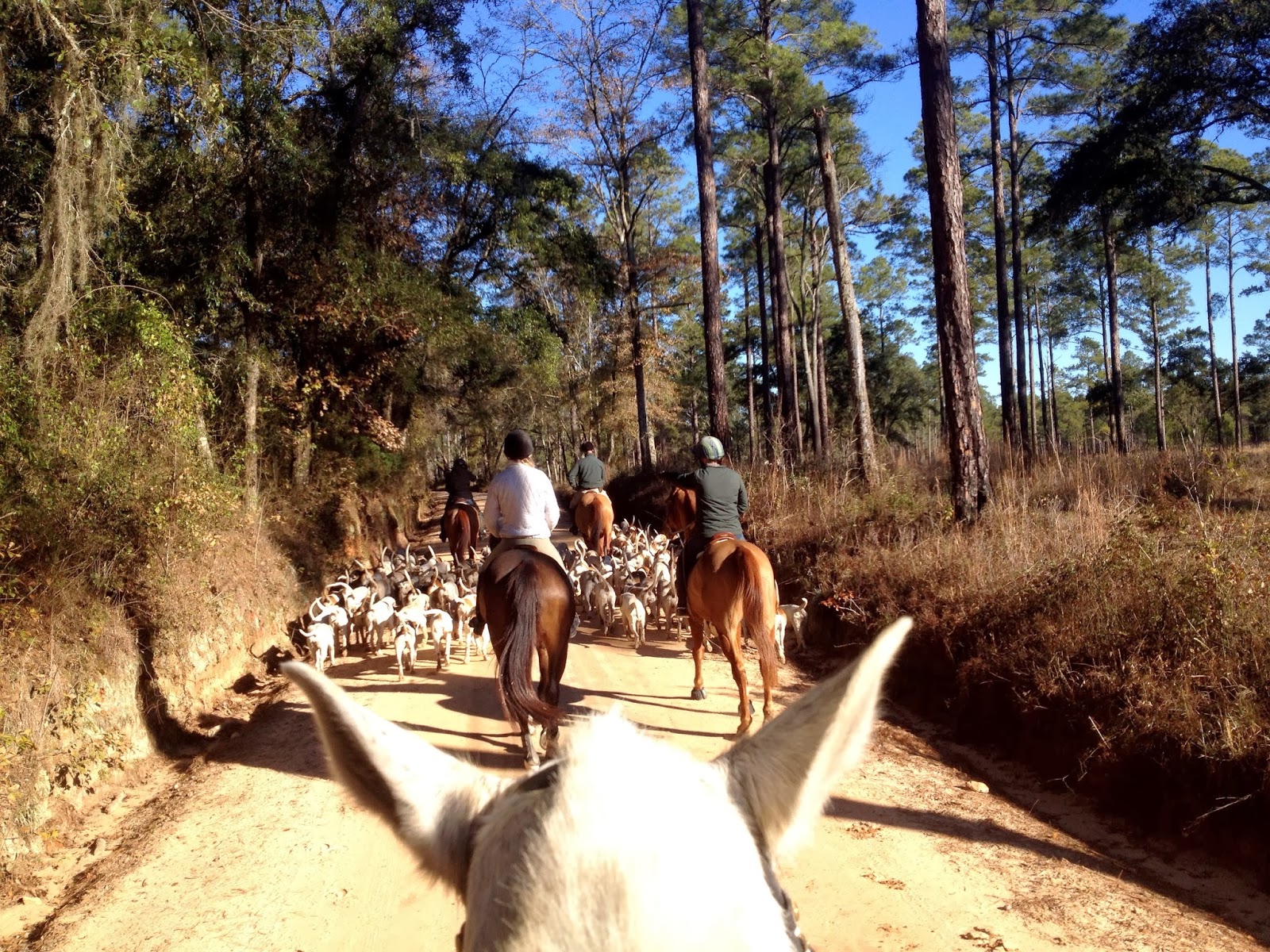 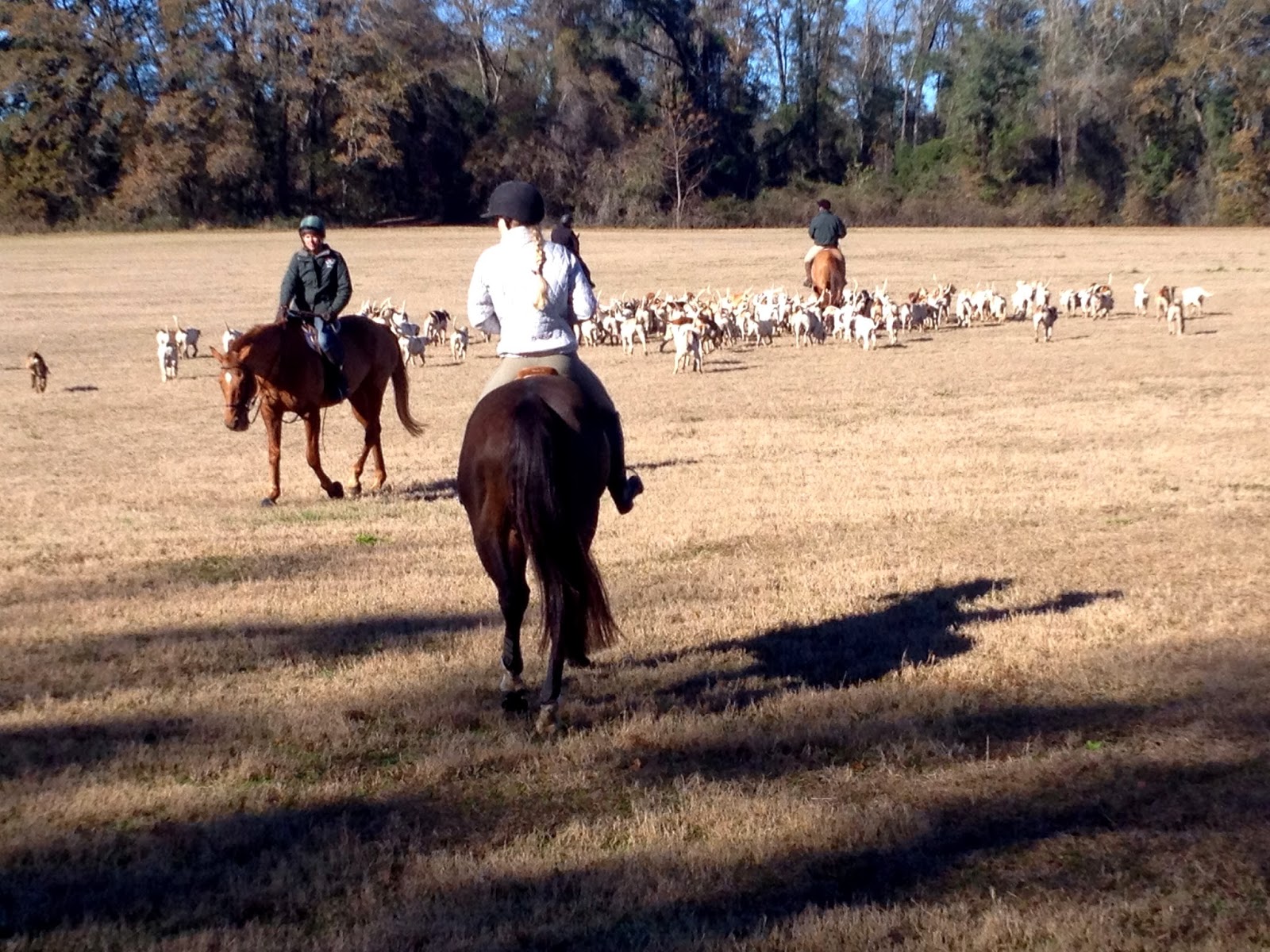 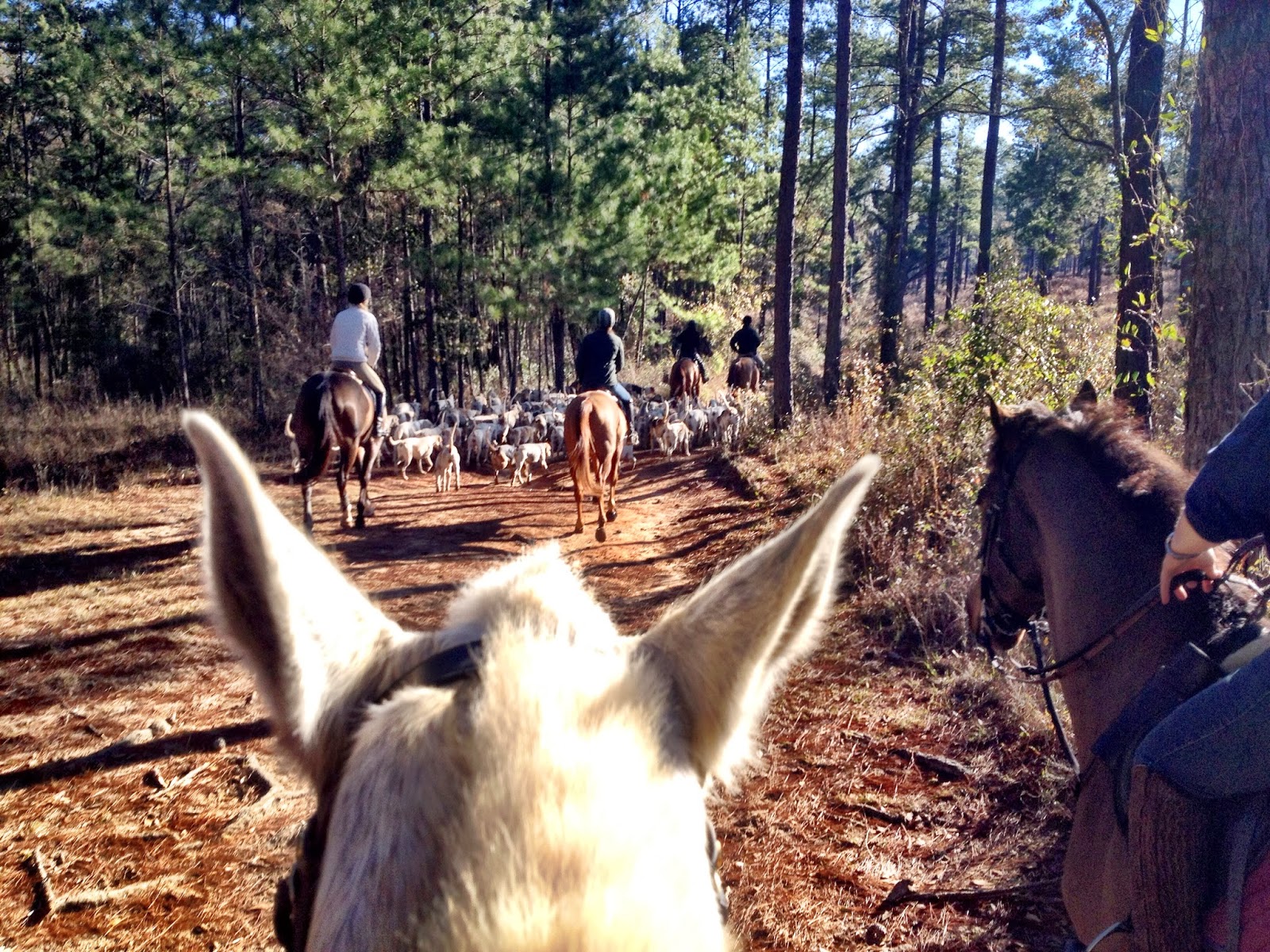 After we were done with the hounds my friend and I went out for a hack.  We hacked down the Florida-Georgia state line to a pretty lake.  It was a beautiful day out! 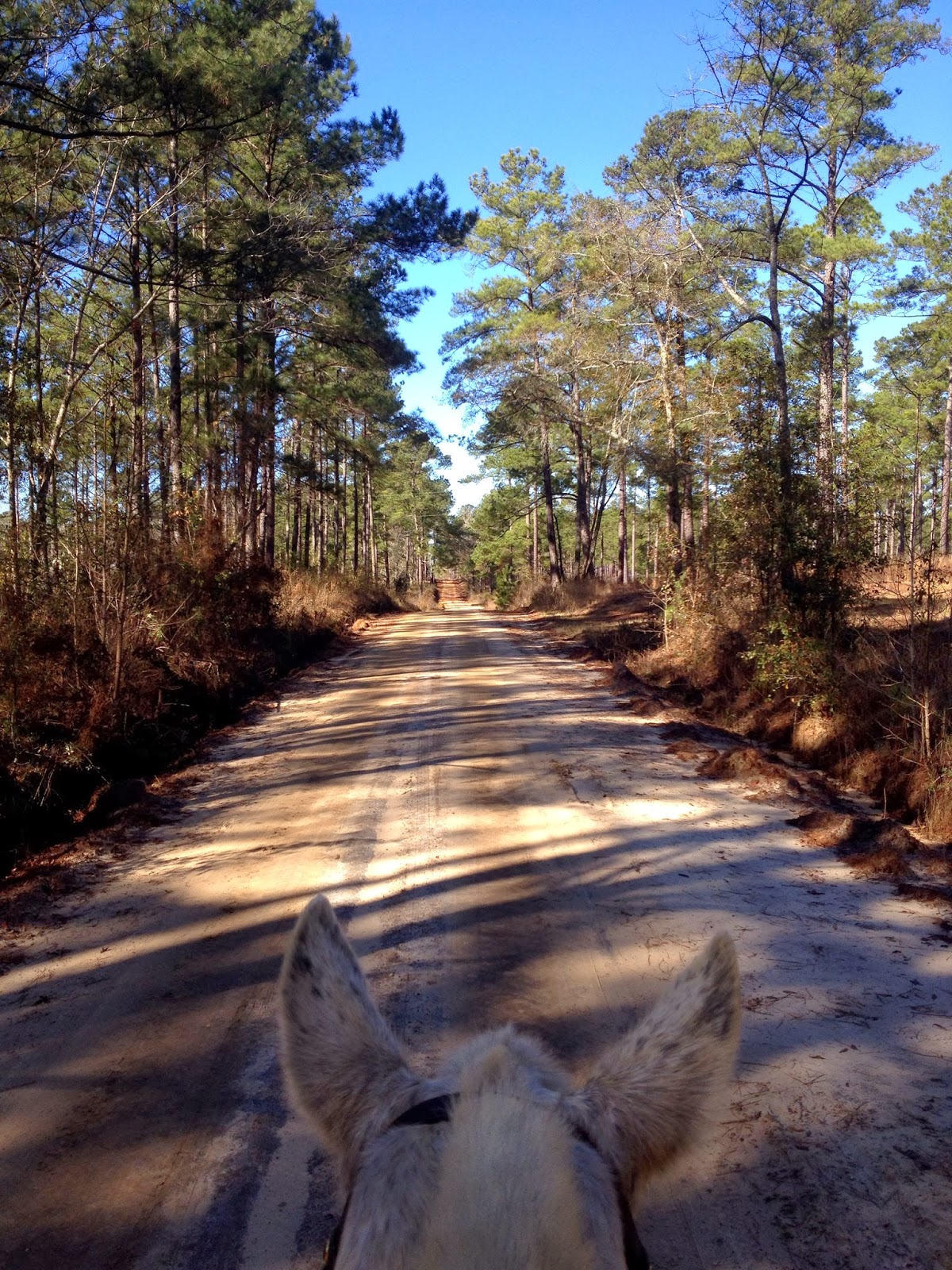 Riding on the Florida-Georgia state line. 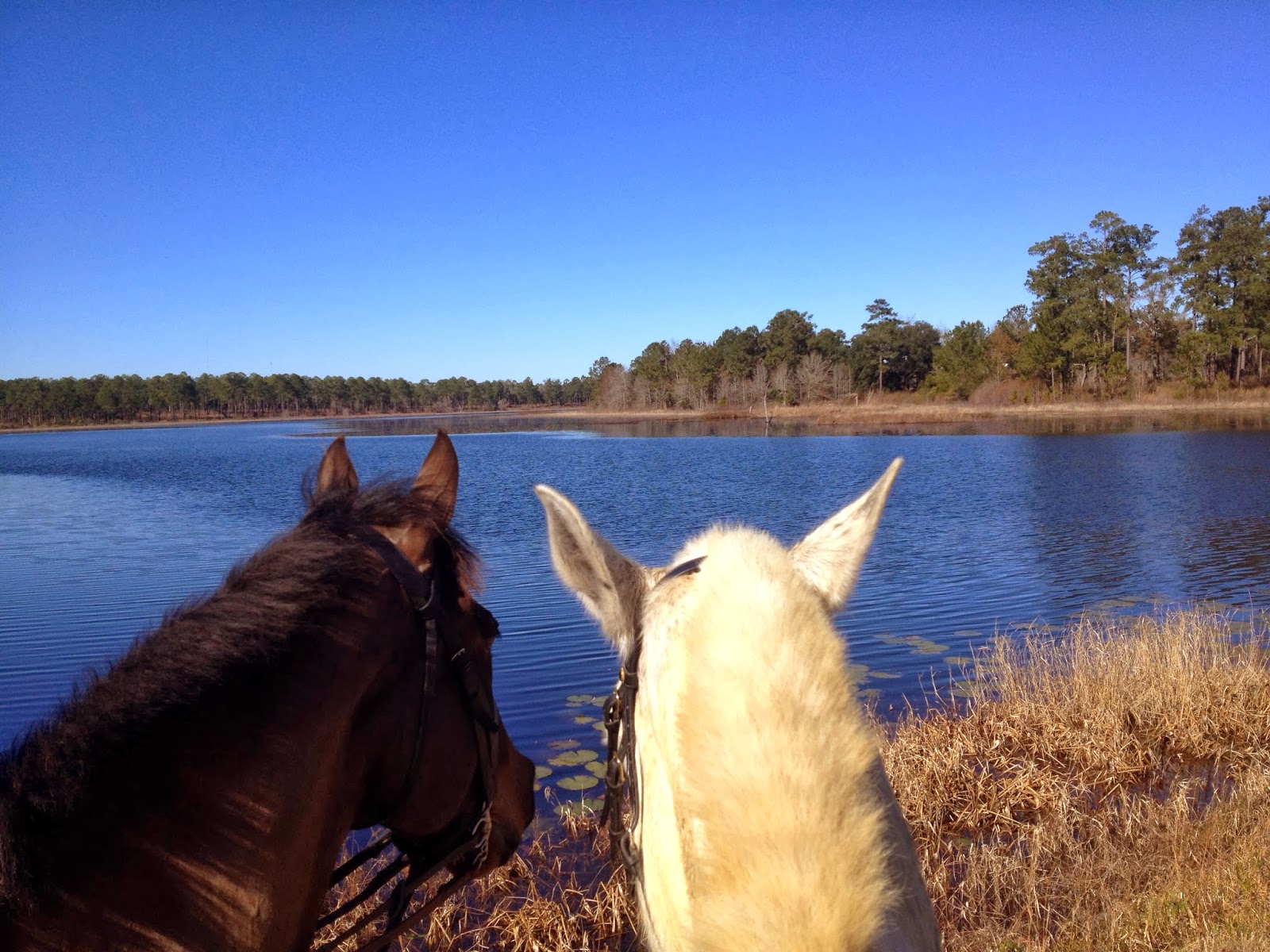 Klein and her new friend Bailey checking out Lake Fontaine. 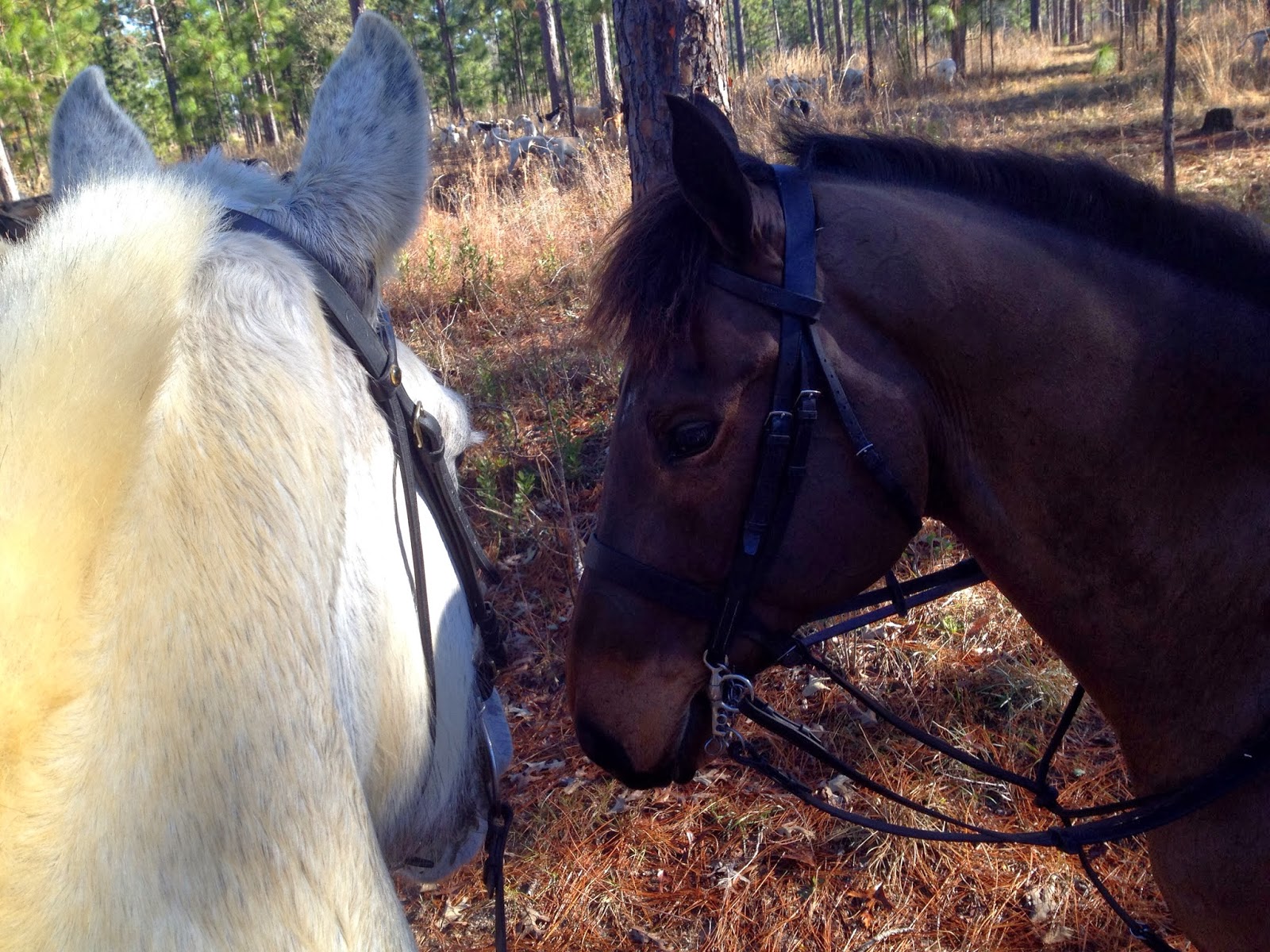 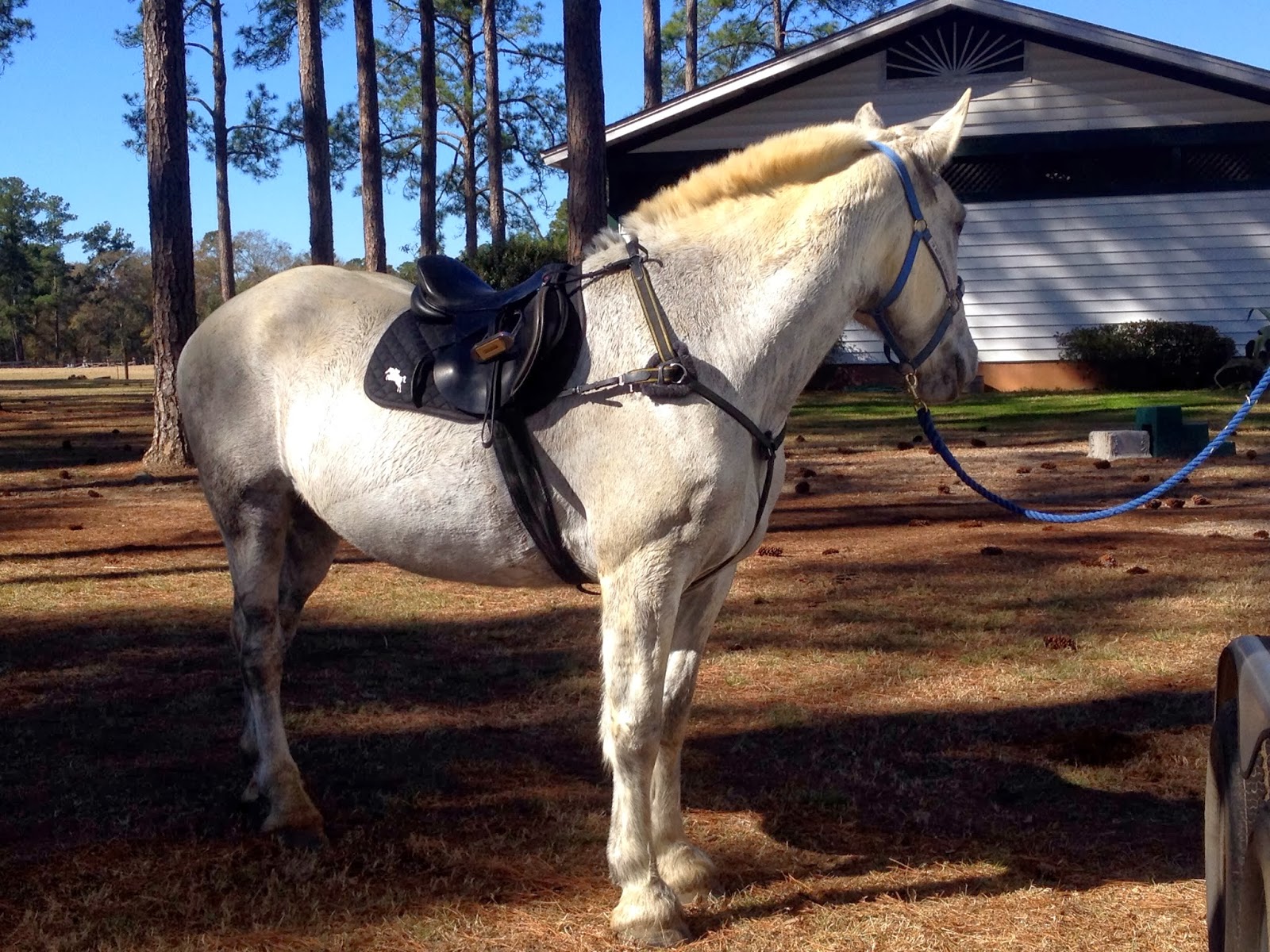 Klein was filthy that morning.  She needs a bath so bad!  She was clean when I left the barn the day before then did a good job rolling all over when I left.  A spa treatment and a new clip are in her immediate future!
Posted by The Jumping Percheron at 11:10 AM