Moch's Feet: Now vs. Then 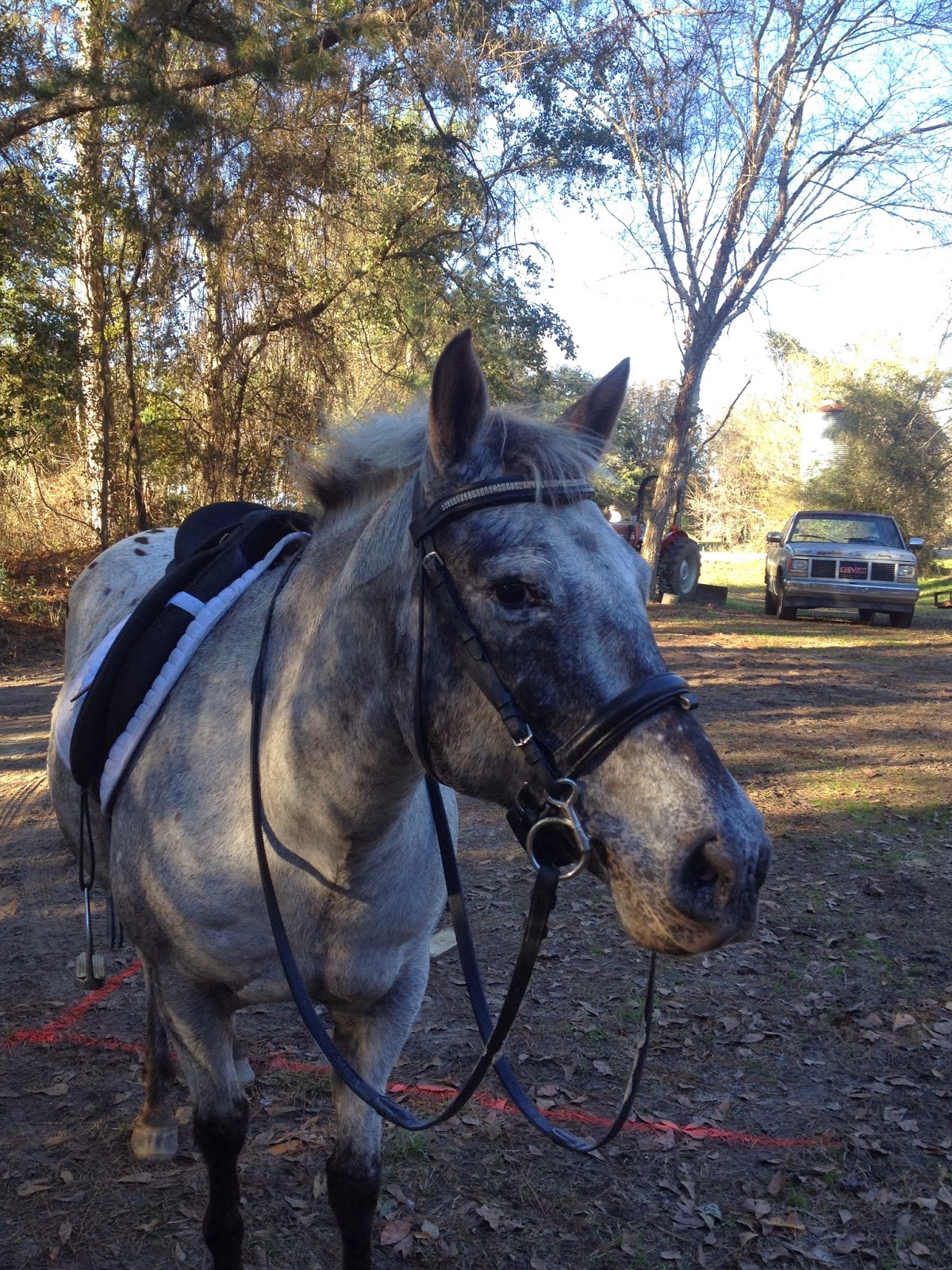 The Odd Couple got a pedicure earlier this week.  Today while I was cleaning Mochi's feet I started to think about the feet we started with and how much improvement she has made.  Moch has great feet to work with in the first place, which is partly why I think they weren't more damaged than they were from improper farrier care when I bought her.  Here are some pictures from right before I bought her.  I took these after the first trim with Cindy Ford, our DAEP out of Alachua, FL. 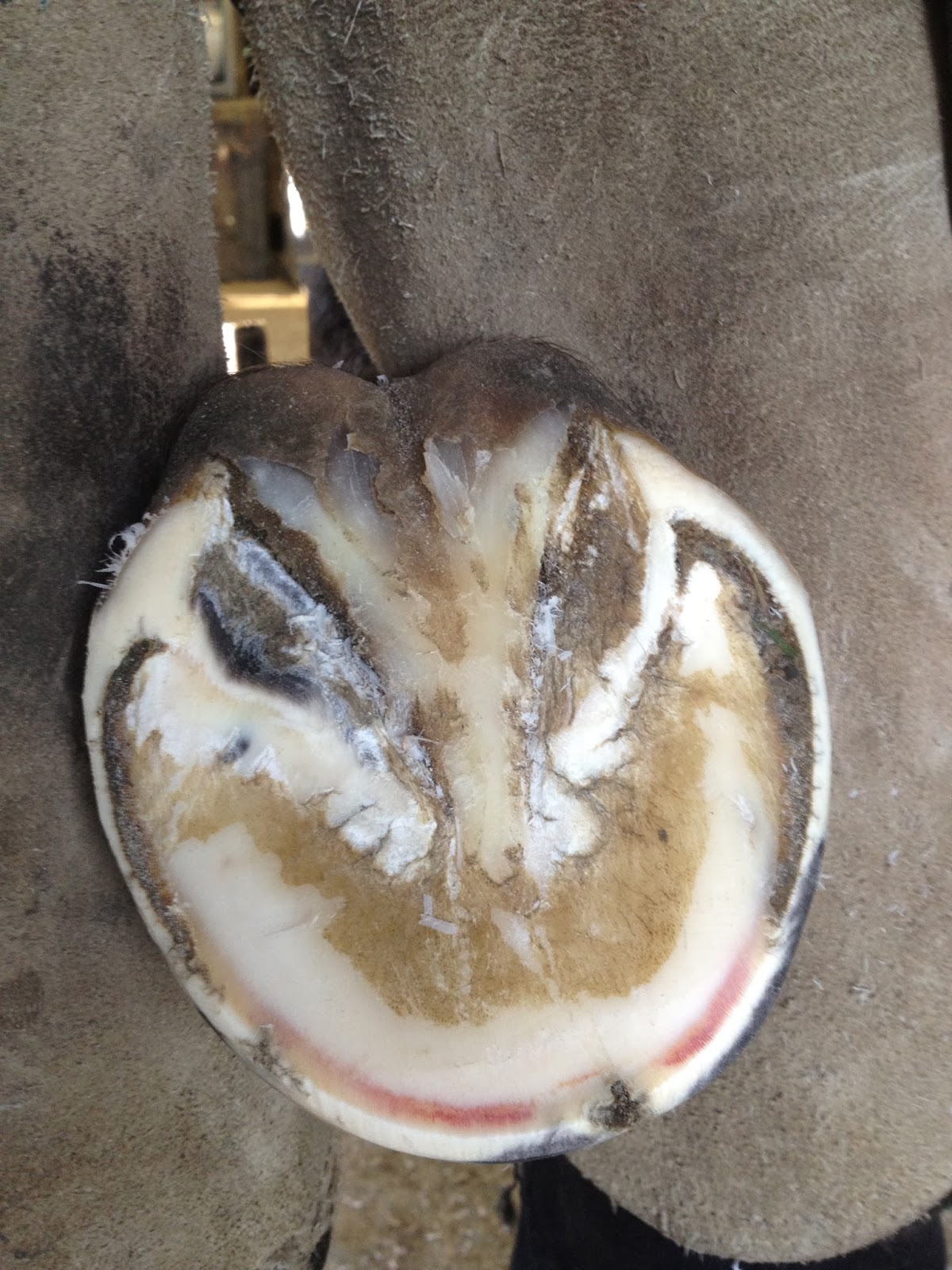 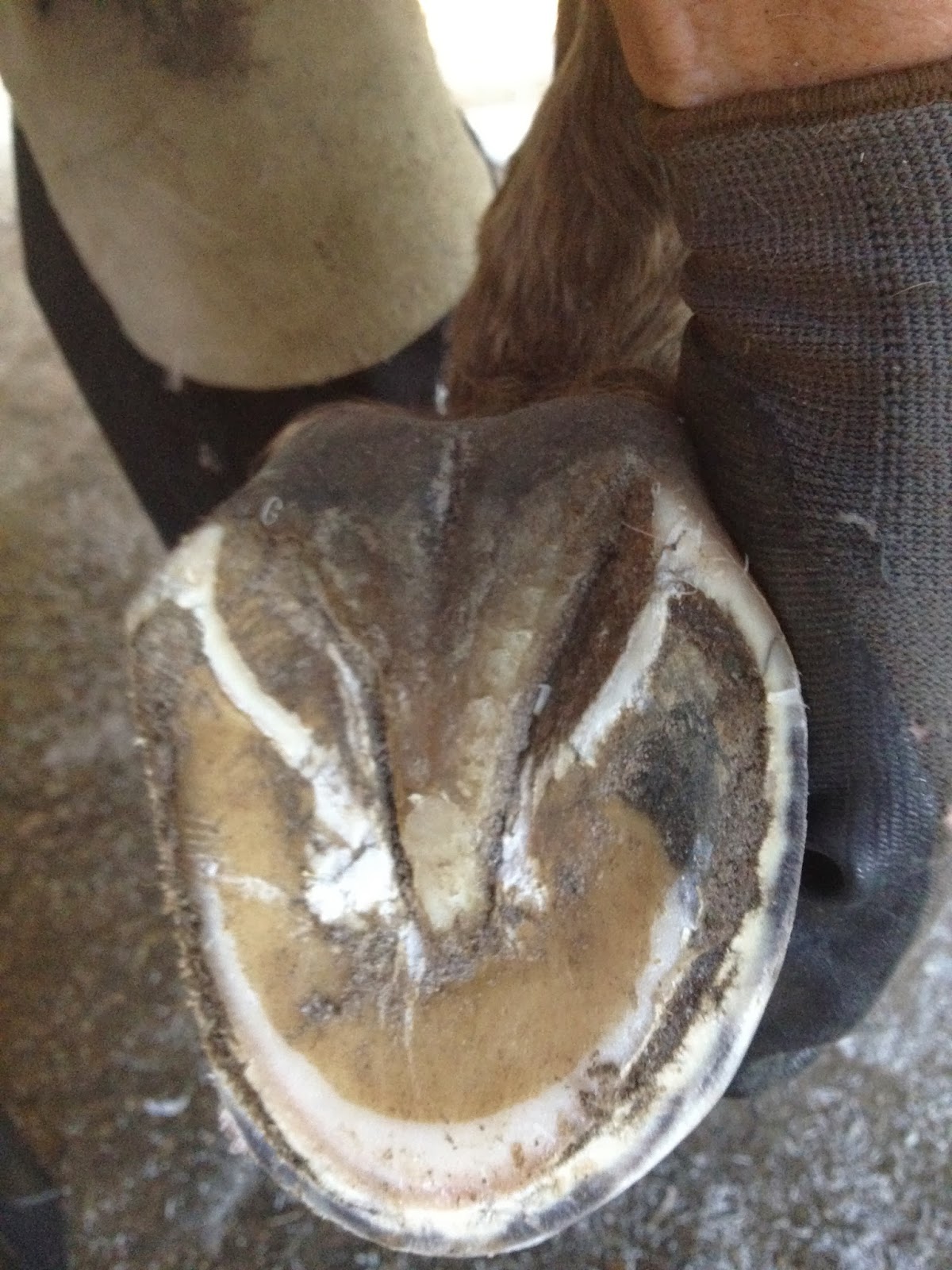 Now, these are the pics I took today: 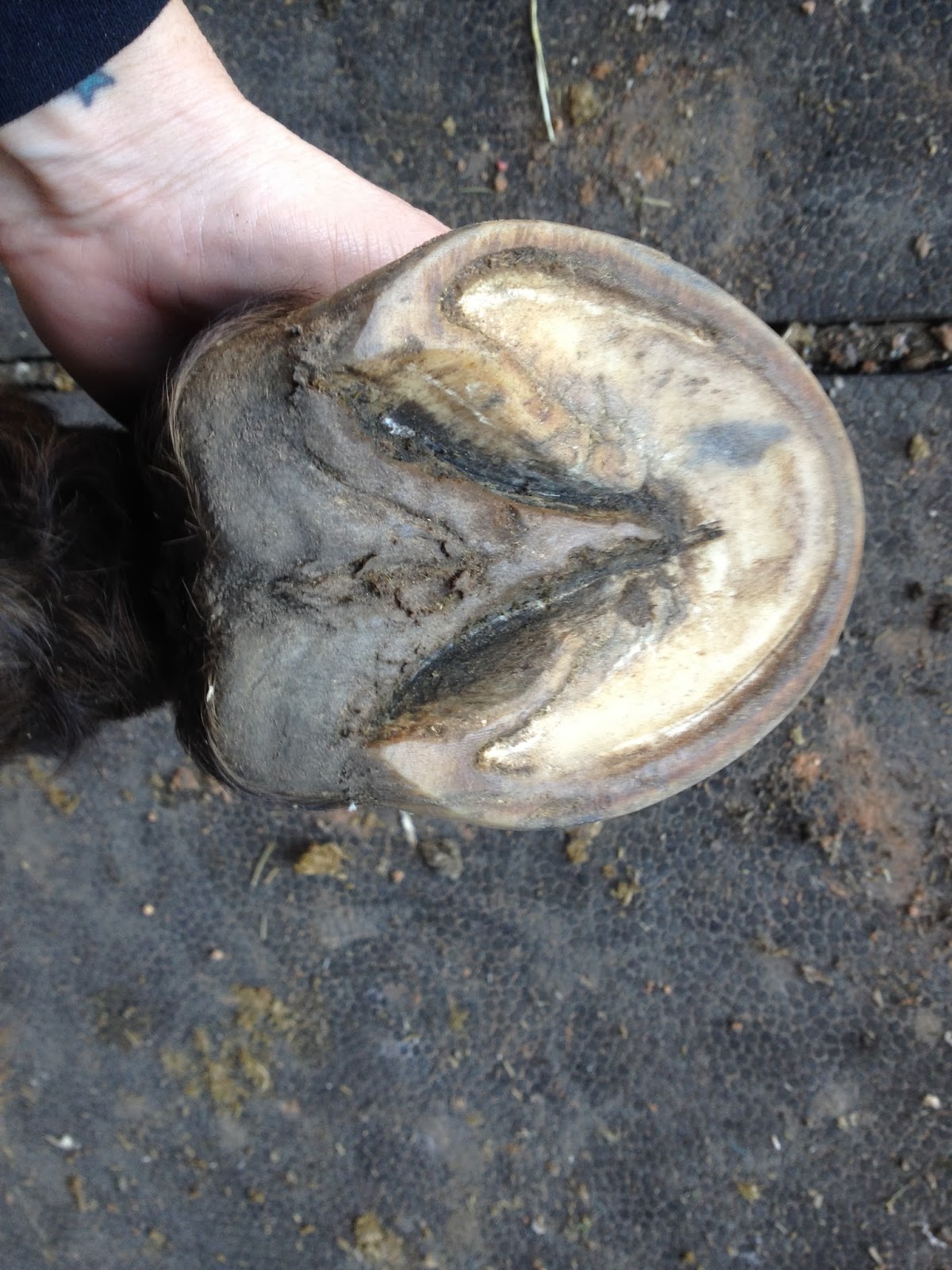 Seriously.  Check out that wall. 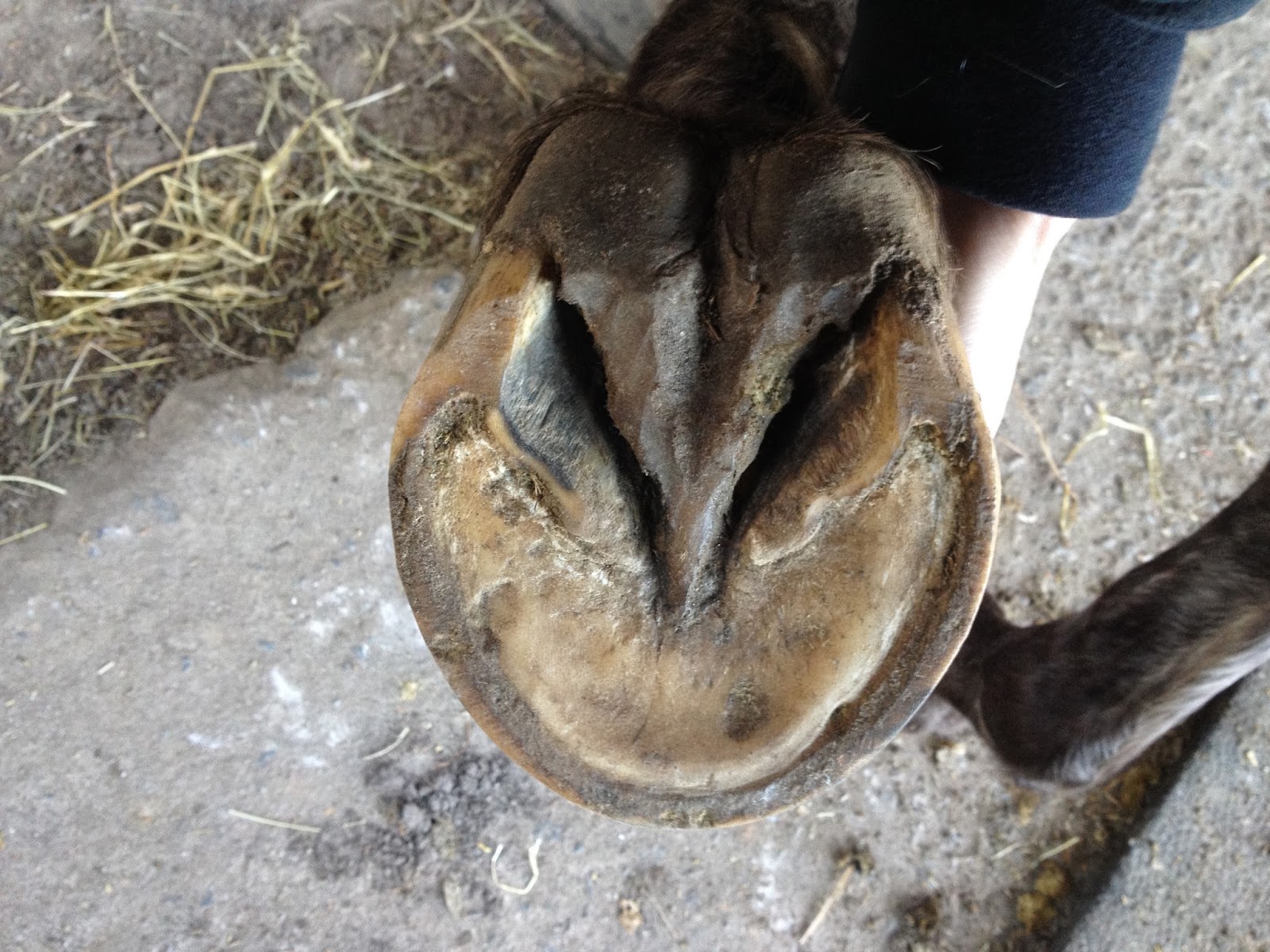 I took Moch on a long ride with a lot of galloping in a little experiment to see if I could wear her down even a little bit.  Nope.  Not even close. 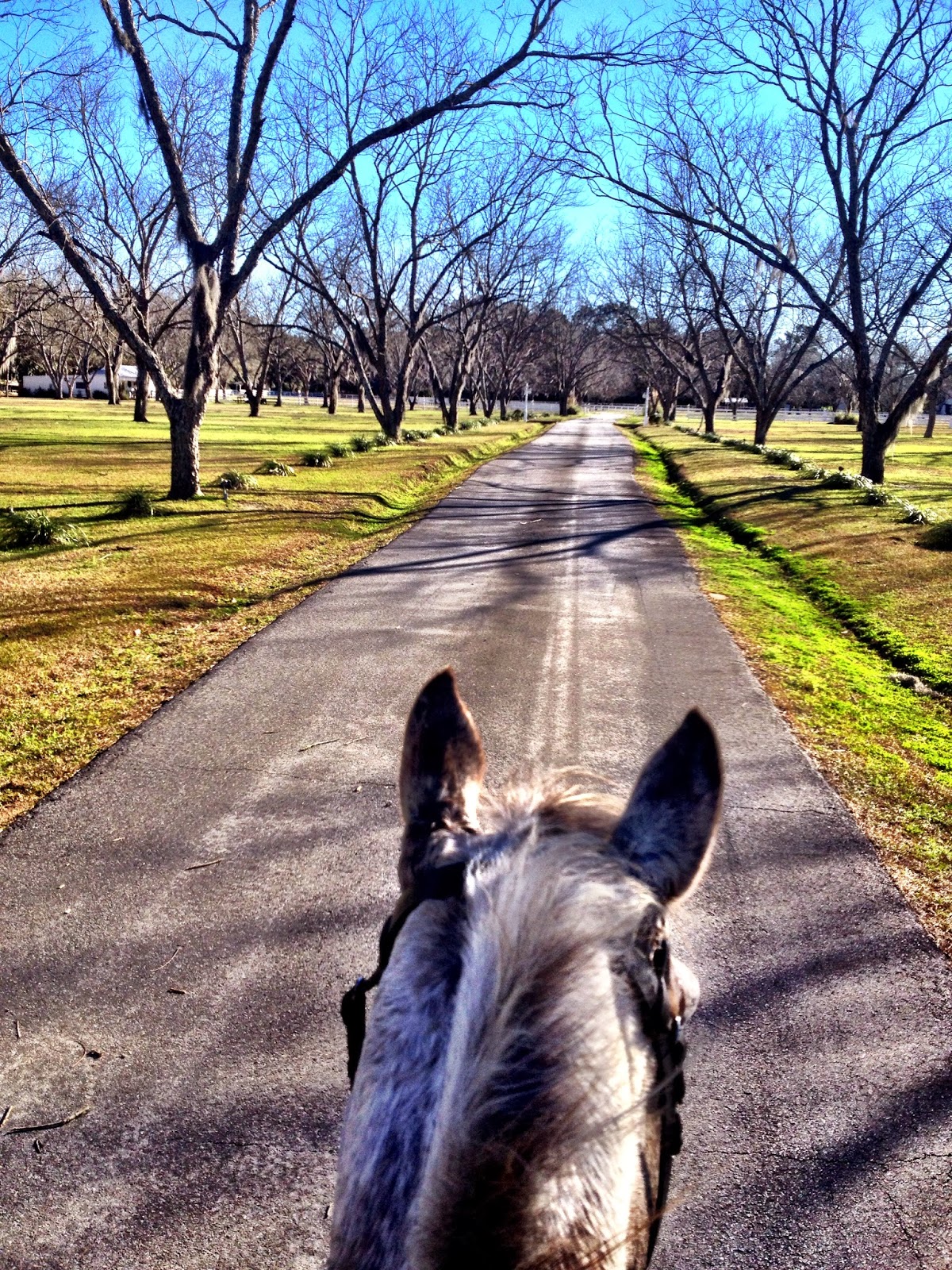 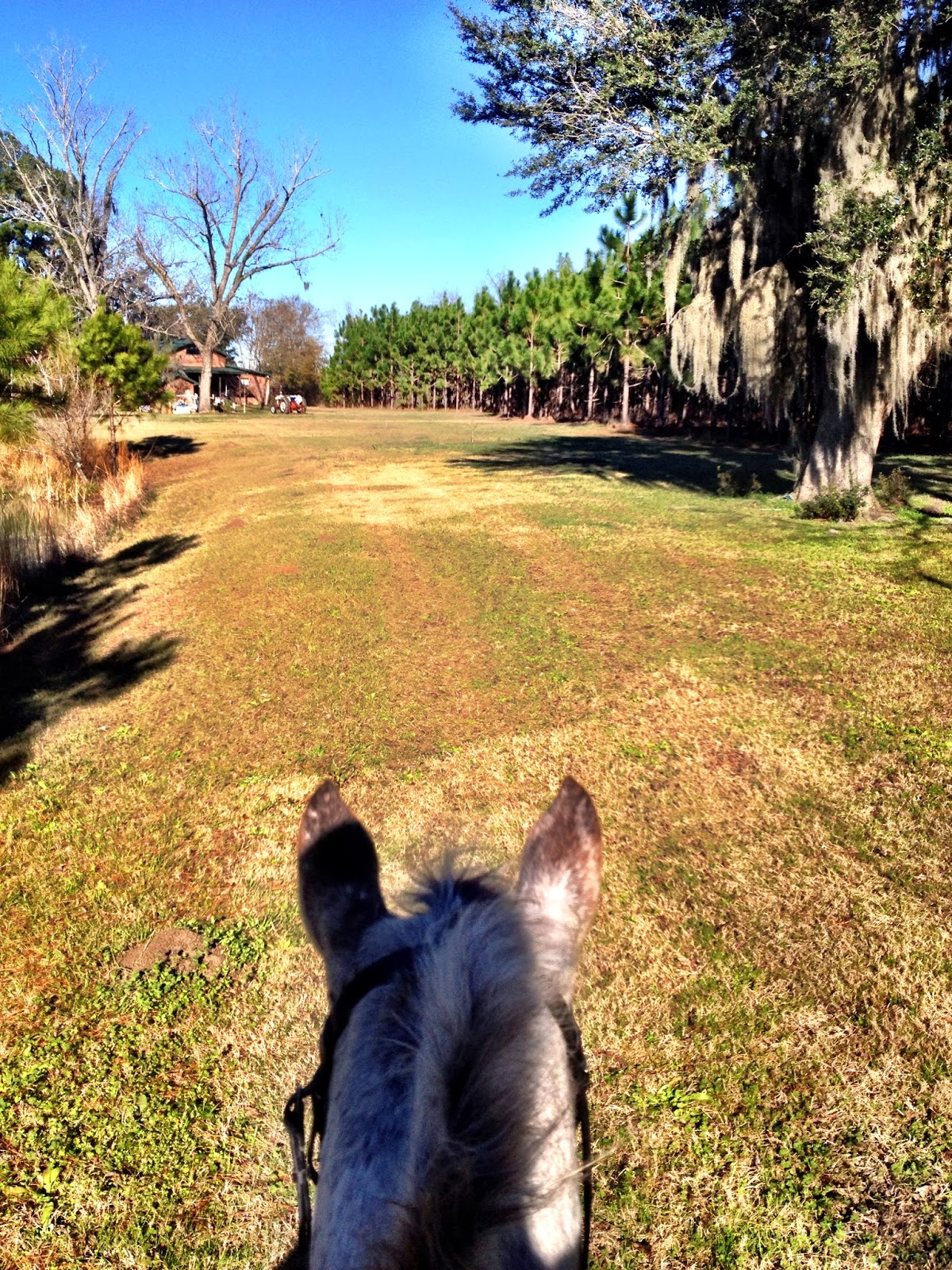 Klein and I worked on some flat work today.  We did serpentines at the trot and canter, simple changes, and a little lateral work.  She was great and was just happy to be out and about.  Tomorrow I'm hauling her to a friend's place to ride, Monday I'm taking her out to road hounds with Live Oak.  The next trip Moch will go on.  I'm hoping to get her out to a state park that's right down the highway pretty soon.

After I rode Klein today, I took Moch out for a hack.  She was a handful and just happy to be out.  Tomorrow she'll go on the lunge line.

There's a new mare that's going to be out in the same herd The Odd Couple are in.  While I was out on Moch I put Klein out with the new girl.  She was out alone and the rest of the mares were in the barn.  We wanted new mare to get used to her new pasture without the stress of the other mares.  Being that Klein is the most non-confrontational mare I put her out with new mare so she could start meeting the girls.  Moch actually had been out with her first while I was out on Klein and Moch didn't really pay much attention to her.  She might not have even noticed there was a new horse out there.

One of the millions of reasons why Klein is awesome?  She had been out with new mare about 30 mins and was letting her eat next to her on the round bale.  She had never seen that horse before she showed up yesterday.  Klein couldn't care less that she was out there.  She just wants to eat and mind her own business. 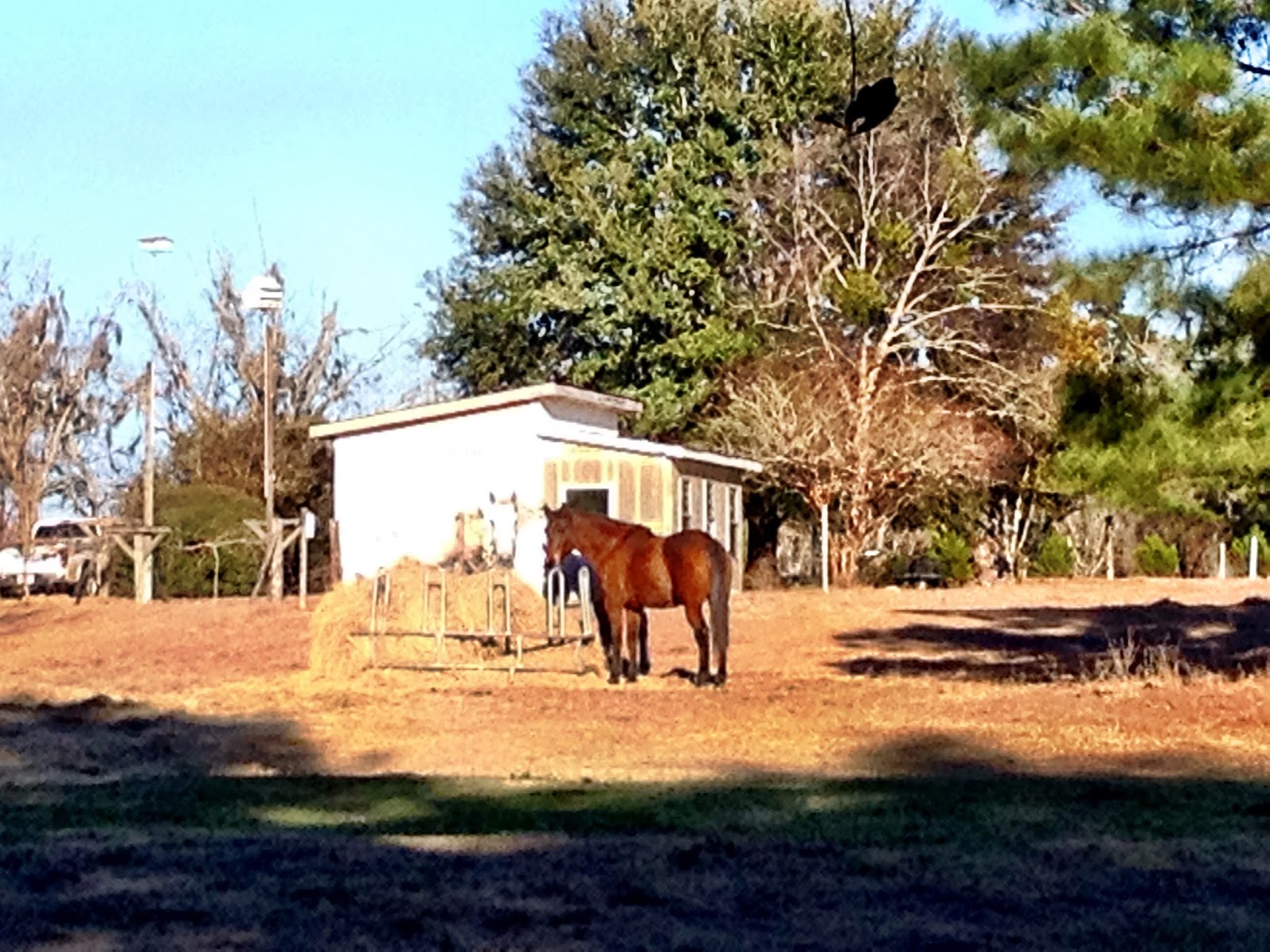 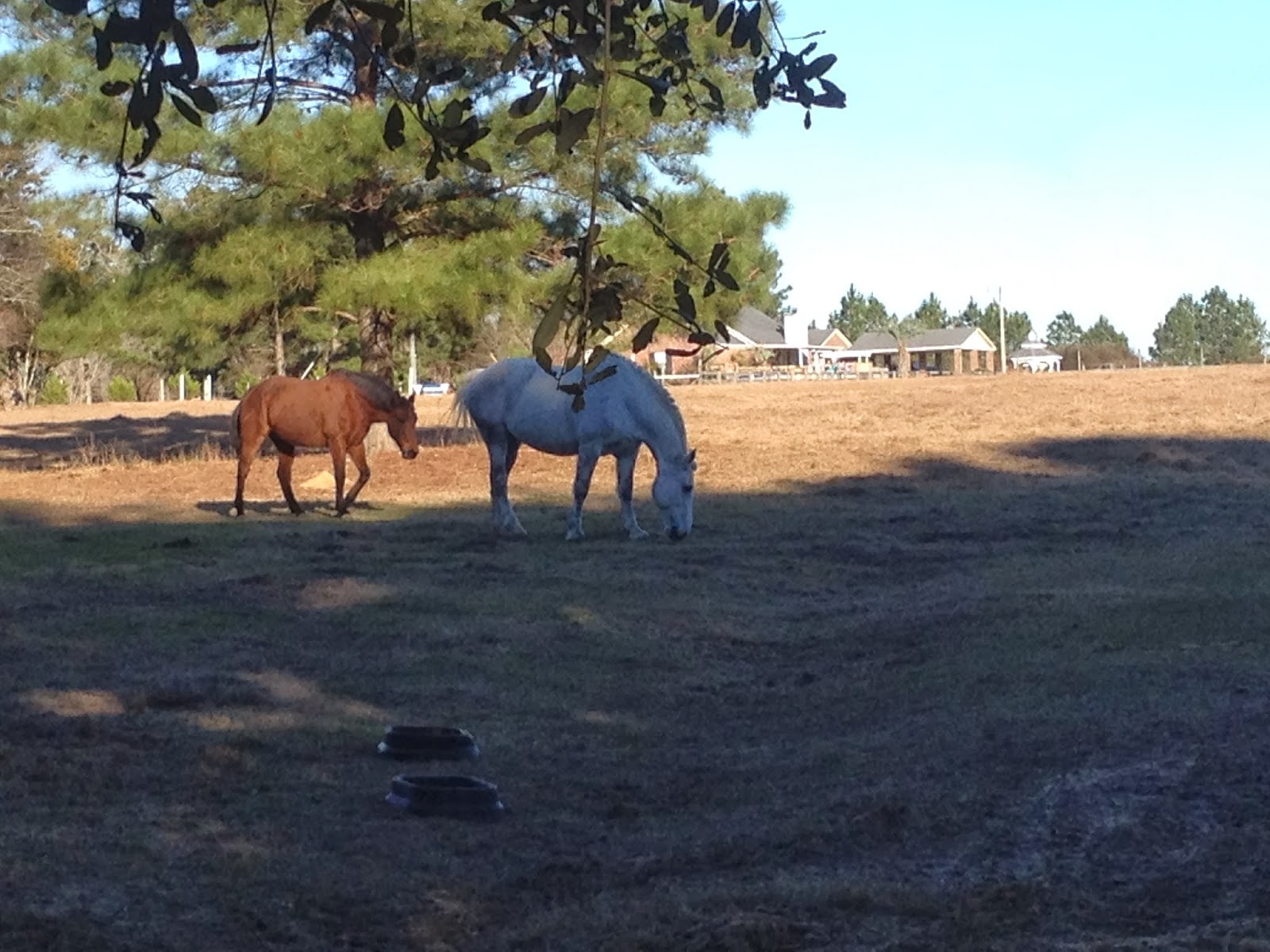 I think new mare was comforted by Klein being accepting.  She followed Klein around. 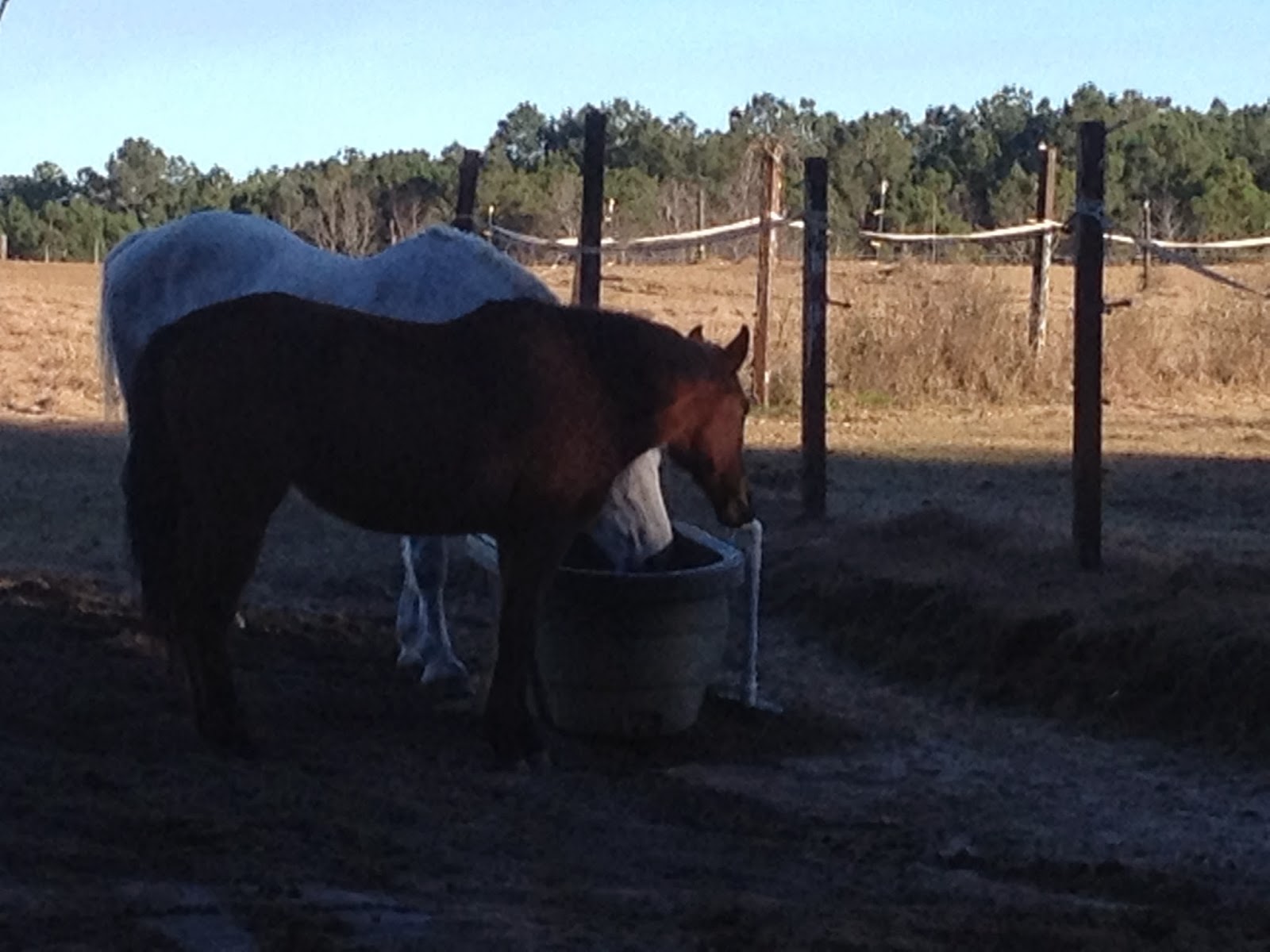 Klein even let her drink next to her.

Klein breaks the mold of the typical mare stereotype.  Some of you asked what I think Klein and Moch will do when Wes gets here?  I don't think they'll do anything, and this proves my theory.  I think they'll welcome him too.  I'm lucky to have two mares that aren't mareish.  Klein is a princess to a certain degree, and she is very independent when she's out with the rest of the mares, but she is not a pushy, alpha type.  Neither is Mochi.  Wes...well, he's the biggest baby I think I've ever seen in a herd.  I'm about 98% sure there will be no drama when he gets here.  Speaking of Wes, I got a little teary eyed when I turned onto the road that goes to the barn today.  I was thinking about the big rig with him on it turning down that road in a couple weeks.  It still doesn't seem real.  It won't seem real until I am looking out the window of the jet as my flight is landing in Salt Lake City in a couple weeks. 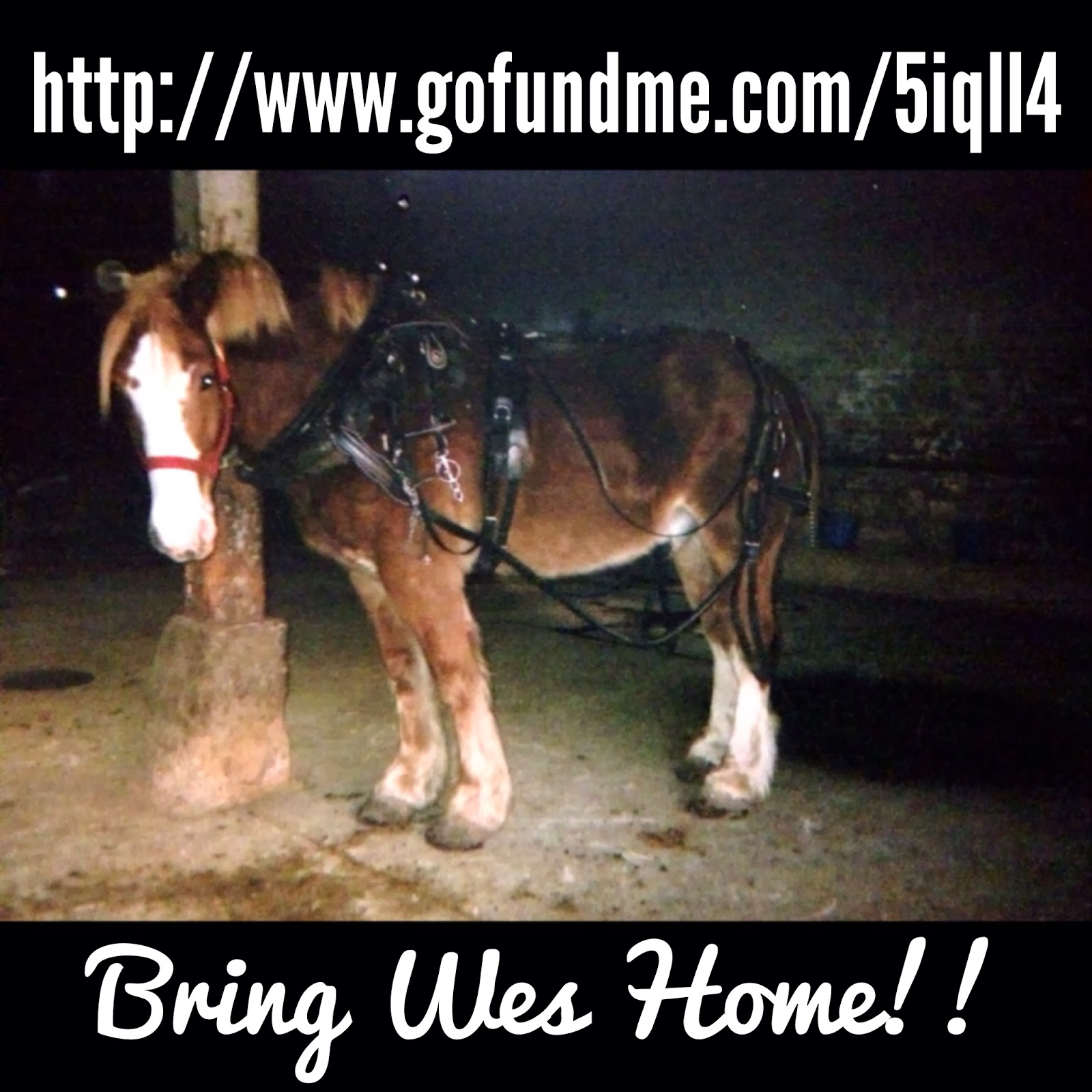 A little mention on rider fitness...I finally nailed my Bar Muscle-Up at Crossfit last Wednesday.  Yeah, it's with a band, but now I can start progressing and lose the band assistance.  If you are wondering what a Bar Muscle-Up is, go search Crossfit Bar Muscle-Up on YouTube, that's the easiest way to explain it. 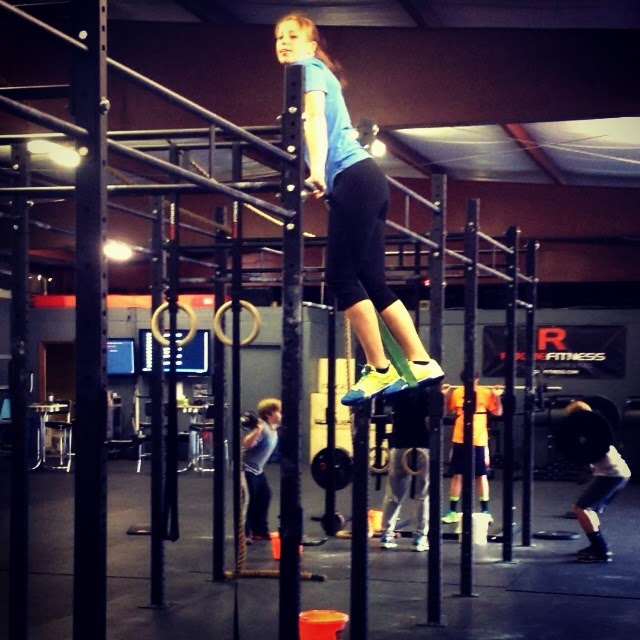 Yeah!
Posted by The Jumping Percheron at 10:41 PM