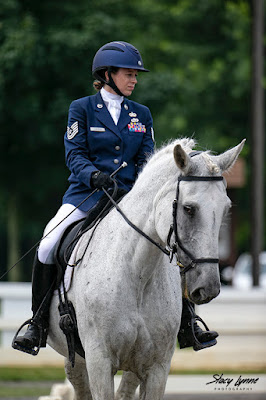 When Klein and I decide we are going to do something, we put 100% effort into it.  We hit our USDF goals hard these past two months.  We did a series of recognized dressage shows in a few weeks.  She is completely proficient at First Level and I was confident we could go out and earn the scores we needed, no problem.  That is what we did. 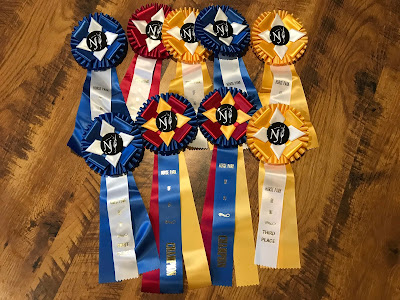 The full collection from two shows over three days.

Stone Tavern was two days with Dressage at the Park the day after.  That Friday I rode 1-2, 1-3, and DSE.  It was miserable that day.  It had been raining a ton, a storm even rolled in about 15 mins after we got there and just let loose on us.  They actually delayed the show an hour because it was raining so hard you could barely see the rings at one point.  After that storm, when we thought it couldn't possibly be more humid, it was, and coats were not waived.  My coat is warmer than your average coat, but there is no other option for me if I want to wear my service jacket.

I felt like Klein was slightly behind my leg for the first test so when we went back to the warm-up I got her moving a bit more with transitions through and within gaits.  1-3 was first and 1-2 was second, then DSE.  At the point in the warm up between tests I really just wanted a solid effort.  It didn't have to be perfect because it was just miserable that day in the thick humidity and I felt like I asked Klein for enough by putting up with working in it in the first place. 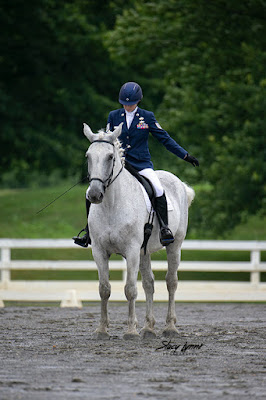 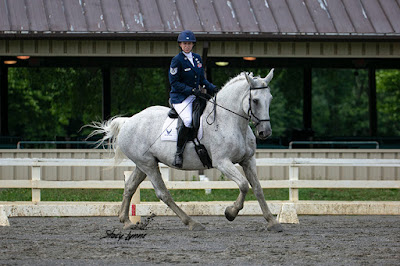 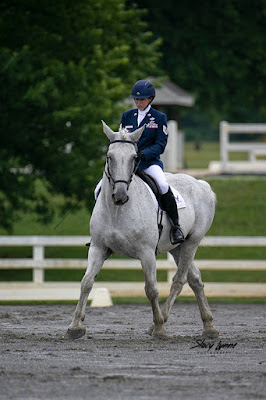 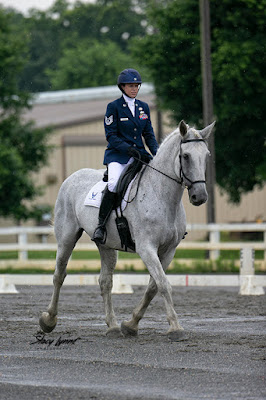 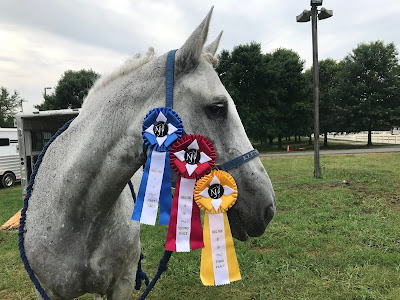 I was super proud of Klein because despite the crushing humidity, and the slight lack of energy from it, we still got the qualifying scores we needed.

The next day was the first DSHB Show aka breed show.  The weather was 100% better that day and it was beautiful.  This is also a recognized USDF show and most of the horses are presented in hand.  There are a few under saddle classes for young horses (nothing over 4 years old).  Prior to that show I had never entered a USDF breed show.  I knew what they were about and how the horses were presented but had not participated in one yet.  The horses are presented in hand and then asked to walk and trot on a triangle.  They are being judged for their potential for dressage sport horse breeding.

The first day the judge loved Klein.  He said that I really should consider breeding her because a lighter version of her would be amazing (nothing is changing my opinion to not breed her fyi).  He also said "You know I can't give you like, a 78% right?"  I said oh yes, I absolutely knew that we were the oddity in a world with VERY expensive warmbloods.  He laughed and said for what Klein is she is exceptional and that he really liked her.  She actually won that class, but the competition was not stiff.  She was also the Mature Mare Champion that day. 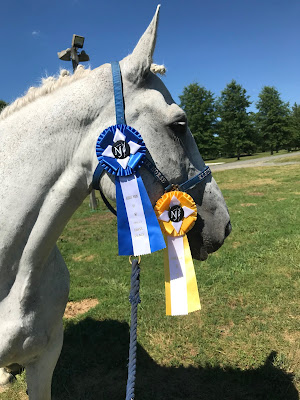 We also did the Amateur Handler class where more emphasis is placed on the handler and how they present the horse.  You set the horse up in front of the judge where instead of looking for breeding potential, they are looking more at the turn out and presentation of the horse.  The handler is also being judged on their appearance (neatness, cleanliness, etc...).  We were third in that class mostly because I needed to learn to set Klein up better.  This was foreign to me but that class was a great learning experience and I really had fun. 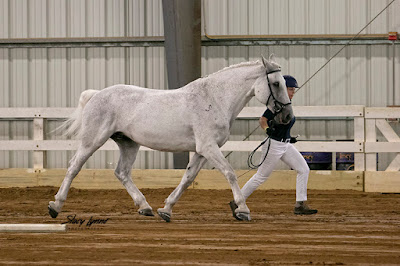 The next day was Dressage at the Park and the weather was pretty much perfect.  We did the same classes for the breed show.  Since this show was a different show the score counted toward year end awards.  The judge that day was not a fan of Klein.  She didn't have much of anything to say to us.  Though she did tell me in the Amateur Handler class that I should try to do something with her tail.  Her docked tail.  There's not much you can do about that, and it will be left alone.  We were fourth in the Mature Mare class that day and 1st in Amateur Handler.  Our saving grace was that the judge did say I presented her the best she can possibly be presented.  Thankfully she is very good in hand and when I told her to pick it up down the long side of the triangle she lengthened her stride and looked great. 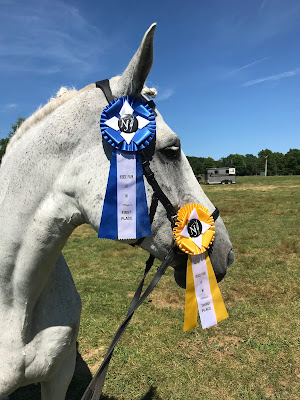 Suddenly Farm was the following Wednesday.  We rode in the late afternoon and it was a nice day thankfully.  We did 1-2, 1-3, and DSE again.  Klein warmed up great.  I had some specific things I was going to incorporate and they worked.  She brought a new level of energy to her tests that day.  Sometimes we fall back into old habits unknowingly until a trained eye from the ground reminds us we have reverted.

She always goes in quietly and obediently but we were able to bring the overall energy up that day.  1-2 went well and I knew it.  She just felt great.  We had a little break then went back to the warm-up to do some transitions and back into the ring we went.  She went in the ring like she OWNED it for 1-3.  Her transitions were super prompt and we just flowed through the test.  I knew it was a good test (1-3), I even texted The Other Half and told him it was probably one of our best tests we had done.  She won all of her classes/tests that day.  There was a really nice looking little warmblood mare in front of us for 1-3 and I thought she did a pretty damn good test, I was surprised to see that we scored slightly higher than her.  Klein can hold her own against the light horses.  She has always been able to. 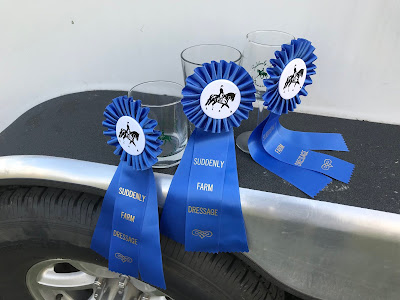 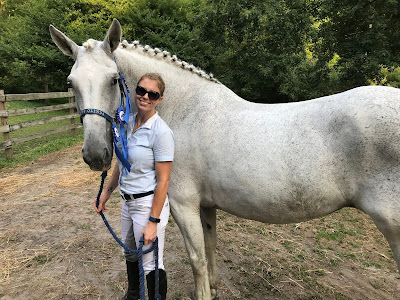 Unfortunately, I have no video of any of these shows.  We went alone to all of them. I feel like I also deserve my own award for braiding my own horse four times in six days.  I have never liked braiding and usually pay other people to do it.  I decided to just get over myself and learn to like it.  Four times in six days will do that.  Klein got a little break after that.  She deserved a min-vacay.  She went back to work this week and feels absolutely amazing.  So now we will get ready for the two championship shows this fall that we qualified for at 1st level and start getting ready for our 2nd level debut.
Posted by The Jumping Percheron at 10:04 PM