There's a Snake in My Fan and Klein Went to Timeout 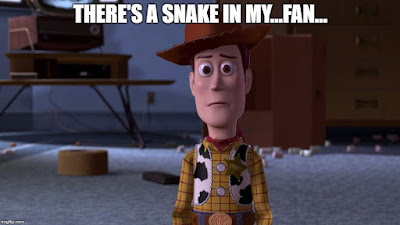 My luck always seems to run low when The Other Half leaves for a work trip.  True to form, The Other Half left for a work trip.  The first day he left Klein got after Mochs again for the first time in over a year.  Mochs was a bit body sore and had some cuts and scrapes so I put Klein in timeout for a week.  I separated her from Wes and Moch and she got fed last every day that week.  Her workload hasn't increased to the point of being what she considers adequate and I think that plays a big part in her getting a little stir crazy/frustrated.  The whole reason I give her a short summer break is to avoid her working in the most humid, buggy time of the year. 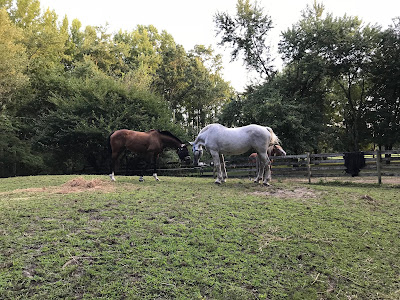 Ms. B has satisfied Klein as far as proving she is not there to boss anyone and is happy to be a follower.  There were no mare glares, no stomping, no squealing.  Klein told her where to go a couple times and Ms. B happily complied.  She even started following Klein around for a while.  She seeks approval and is happy to have a leader.  That's all Klein needs to know.

Since New Jersey has been the rainforest this year, the workload has increased a little slower than I would like.  If it isn't raining, it's extremely humid and miserable outside.  I love hot weather and sun, but this crushing humidity has just not ever left for any period of time up here this year.  The rain was really starting to get to me too.  I need the sun.  I can't take grey day after grey day after grey crappy, rainy day.  The weather this year as a whole has just been one big giant disappointment from day 1.  The good news is, our time in New Jersey is coming to an end.  Two main reasons I was ok with coming up here, the horses enjoyed some colder weather, and I knew we were only here temporarily.

However, even with the crappy weather, with the work we have got done, Klein is now schooling half-pass and pirouette at the trot.

Next bad luck thing to happen while The Other Half was gone...I hear this adorable little kitty throwing up in the middle of the night. 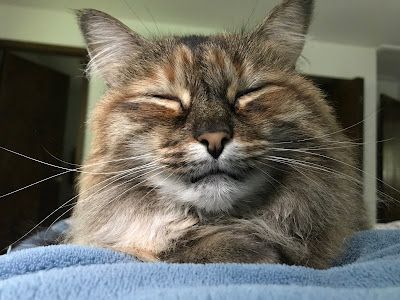 I turn my light on to see where she is, only to find that she has killed a mouse, ripped its throat out, proudly put it on the foot of the bed, then proceeded to throw up its feet.  It's 3:30am, and there is a dead mouse on the foot on my bed, and vomit with mouse feet in it.  I'm not going to lie though, I was proud of her hunting skills and after I cleaned it all up I gave her some treats and told her she did a great job.  If it wasn't 3:30am I probably would have been more pissed and grossed out.

Fast forward to the night before The Other Half comes home...I go to turn my stall fans off for the night and when I hit the switch I hear one clinking as it slows down.  I couldn't figure out how that fan would have broke.  I thought for sure something must have come loose in it or maybe a blade got bent somehow.  No, I look in the stall to see something IN the fan.  I was like what the hell is in that fan?!?!?!  I took a couple steps into the stall to realize THERE WAS A SNAKE MY FAN.  A SNAKE.  Obviously, a stupid snake because it slithered into the fan and got chopped in the head, but that is just creepy and gross.  I would rather have another dead mouse on the foot of the bed. 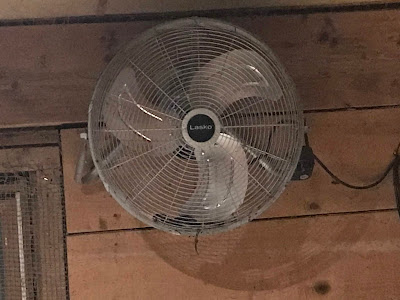 Normally snakes don't bother me too much, but a snake in the fan, and hearing that sound.  No thanks.  I'm out.  That is The Other Half's department.  I Marco Polo'd him (if you don't have that app you should get it!) and let him hear the noise then showed him what it was.  He thought it was hilarious and showed all his friends he was with, who also all thought it was hilarious.  It was not hilarious.  It also stayed right there in the fan until the next afternoon when he got home.  He pulled into the driveway, got out of his car and went straight into that stall and grabbed it out of the fan.

Hopefully he is home for a while now so that the shenanigans can stop.  It would be nice if New Jersey also got its life together and stopped being stupid with the weather.  The heatwave we had this past week was exceedingly brutal.  Below is a video from the other day where after standing under their fans all day, I hosed each of them off then turned them out in the other pasture so I could drag the one they were in.  They all took turns rolling then the girls went tearing around like they had no sense.  Wes just watched them.  It's too hot for that nonsense as far as he is concerned.  Once they were done, Klein ran to the gate and nickered at me like "Ok, stalls are clean, pasture is dragged, we are done playing, let us back over there."  I opened the gate and they all went running back into their stalls to be under their fans.

Posted by The Jumping Percheron at 8:10 AM