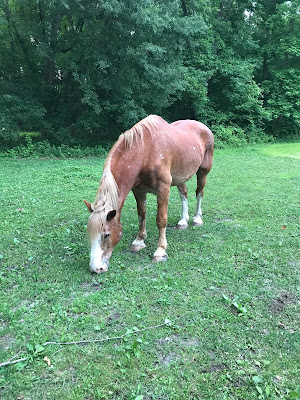 A few weeks ago we had a heatwave that was packed with extremely high humidity.  The heat index was 105 one of those days.  The temperature also significantly jumped up from where it was when the heatwave started.

Wes isn't a fan of the heat.  1.  He's Canadian and 2.  he has always lived where there was a real winter.  The south Georgia heat wasn't the most comfortable climate for him.  He would be sweating before the sun came up and at one point he began to lose some weight and it was a little tough to get weight back on him.  We thought that what we were seeing then may have been the beginning of the end.  I thought we had maybe began to see the point where an older horse begins to fade by becoming a hard keeper and going downhill from there.

There was never any other issue with him though.  Mentally he is fine, he hasn't gone senile at all.  He's a bit stiff but Pentosan Gold keeps him loosened up and after years working his whole life, it was par for the course.  He has all his teeth, in fact, when he got them done earlier this year the dentist was surprised that he still has 75% surface left at his age (27).  He eats fine, he gets up and down fine.

When we came up to New Jersey we saw an immediate change in him.  All of sudden the weight came back and he was his shiny, dappled self by spring.  It was clear that taking him out of the heat turned the clock back on him probably because the constant load on his system decreased so much.

The point of all of this is that it is a known fact that heat and humidity combined are not his friend.  That type of environment is hard on any big horse.  The heat can be handled, it is the combination of high humidity and heat that is the problem.  The day the heat wave started Wes seemed to be having a little trouble breathing.  His breathing was just slightly labored.  He was sweating, eating, drinking, pooping, and bossing Mochs so we just tried to keep him as cool as we could.  He was hosed off several times a day, had a big barrel fan in front of him, got alcohol baths, hydration hay, cold beer in his dinner at night, alcohol baths, and extra electrolytes.  He seemed a bit lethargic but that also could very easily have been a result of the heat too. 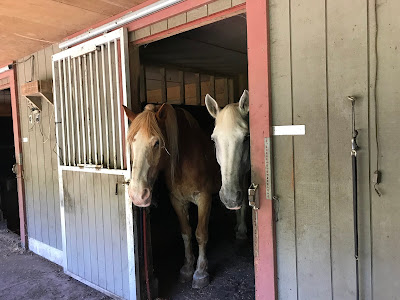 They insist on hanging out in a stall together some days.

He recently blew a nasty abscess out of the top of his left foot too.  No idea what could have caused it but it was in the same foot as last time only on the other side of the foot.  He also had a really gross tick bite that had gotten swollen.  Both of those were healed by this time though. The Other Half suggested that maybe his system was just a bit taxed lately from getting over the abscess and was trying to catch up. 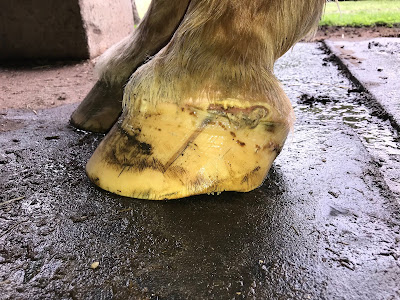 He seemed to feel a bit better, and never got worse with his breathing.  By the end of the week all four legs stocked up and he seemed a little out of it, but still being his normal self beyond that with his daily routine.  He did start to go off his dinner a little bit at the end of the week but was still eating his hay.  The heatwave broke, with the humidity dropping significantly and the temperature dropping enough to feel a difference.

Wes perked up, his legs all went down, he was back on his dinner grain but then after a couple days the slightly labored breathing came back, even with standing under the fan in his stall all day.  At this point I knew something else was going on, he also began to lose weight.  I took his temperature and it was just slightly elevated.  The vet came out the next day and couldn't find anything obvious.  She did some breathing tests and listened to everything and there were no significant findings but she agreed something was off with him.  She pulled blood and by late afternoon we had the results.

He had Anaplasmosis and was getting over it on his own.  I was relieved on one hand because we had an answer and the treatment is easy and effective.  On the other hand I felt horrible because on its own Anaplasmosis sucks, but in a heatwave too?  His changes just perfectly coincided with the heatwave and since we knew his history with that type of climate we had every reason to believe it was some type of heat stress.  If this would have happened in cooler weather the vet would have been called the first day.

Both of the mares have had it here.  Mochs acted like she was on her death bed and wouldn't move or eat.  Klein had our first November here.  The only reason I knew something was up with her was because it was November, and I noticed some odd breathing while we were standing in the pasture.  She wasn't doing anything and it was cool out, there was no reason for this breathing.  She was still eating, drinking and acting completely normal.  I took her temperature and it was 105.9.  The vet was there within an hour.

We did the typical Doxycycline treatment even it was on its way out, we wanted to make sure he kicked it.  All is well now and he is out running around with his womens and trying to boss Mochs like usual.  I cannot believe he just "got over it on his own."  He is a tough old man.  Anaplasmosis tried to kick his ass and he fought it off.

The Other Half said he told me so about the "that tick thing."  He said that was his guess, and it was right.
Posted by The Jumping Percheron at 2:34 PM