The One That Didn't Get Away 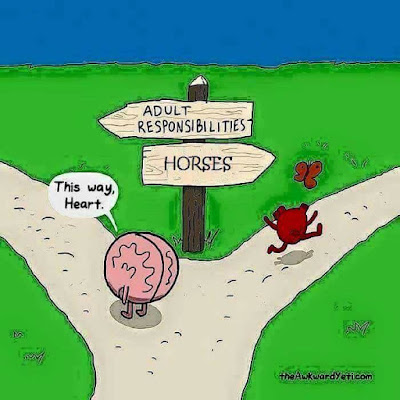 My obsession with Ms. B continued to to grow almost by the day.  Definitely by the ride.  Not only is she just drop dead gorgeous to look at (seriously, she could stop traffic), but she is just so smart and so willing, and incredibly brave.  She is my kind of mare to the core.  I guess everyone saw my obsession with her was a bit over the top from the beginning, like more than I just like this horse.  I have liked her since I first sat on her.  I told people her walk felt different to me and they thought I was kind of weird and really had no idea what I was talking about.  Like, good different, not there is a problem different.  She also has always felt like the perfect size horse for me.  I have just always felt really good sitting on her.

Early on in our relationship thoughts started creeping into my head like I may need to actually figure out a way to keep this mare for a while.  The opportunity just happened to present itself, well duh because it was meant to be, and I jumped on that immediately.  Do I need another horse?  No.  Another issue was The Other Half was out of the country for work.  He did meet her before he left though.  That was also about three rides into our time together.  So needless to say she was far, far from that point by the time I started really feeling like I couldn't let her go.  But a decision like that is not something I can make without him here.  I wanted him to see her in person again and be around her to see how we interact and how she was going by that time.  We are also due to move again at the end of this year so I felt like I probably needed to wait to hear where we were going.  Then I thought, does it even matter?  You can't really pass up something you feel so strongly about because of some detail like that.

The Other Half came home and saw how awesome she had become.  We had a couple difficult rides that weren't because of behavior, they were her asking and showing me she needing some changes made.  I made those changes (bit change was the big one) and the progress started going up in leaps and bounds.  I started having those rides where I had to stop for a minute because I was so ecstatic about how she was feeling/going.  I would pretty much tell The Other Half on a daily basis how amazing she was and how much I liked her and how much she just kept reeling me in more and more with her awesomeness.  She just continued to shatter every single stereotype I ever had of OTTBs.  Yeah, I can hear you all laughing, that's fine, The Other Half laughed at me at first too.

I had always said that if we decided to go for it she needed to go for a PPE since we all know OTTBs have a slightly higher potential for physical issues/old injuries, etc...  Though I have not had one single issue with her as far as soundness or anything else.  I still felt like I better do it because I would have the same plan with her as I do for Klein, a lot of riding, a lot of adventures, a lot of shows.  Truth be told, I've never PPE'd a horse.  Some people think that is stupid, I've always just been lucky.  Mochs issue came along years after I bought her.  She had never had an issue up until then either. 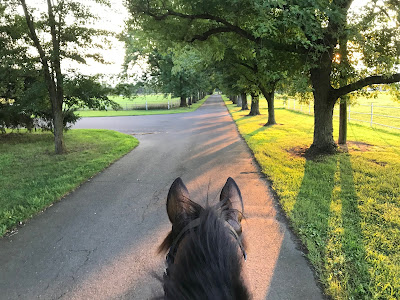 Hacking around, aka riding off into the sunset.

Anyway, after I kept having these rides where Ms. B would just continually one up herself.  She started nickering to me when I would go to get her, and she started putting her head in my arms.  I just feel like she was trying so hard to prove herself so she could be a permanent family member.  I thought ok, I better go get this PPE done because by that point it would already crush me if something significant was found.  So, I made an appointment with Dr. Smith at NJ Equine, the same vet that has taken such stellar care of Mochs and got her so sound.  Not only is she a phenomenal vet, she also very honest and realistic. 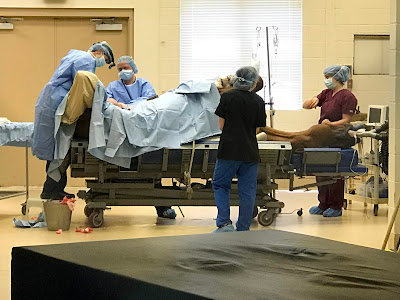 When the time came to start her exam I unloaded her and she stood like a statue.  There was a few times she made a mare glare but 95% of the time, she stood like a statue.  She was so good.  They even commented she was "being really good, for a TB."  Haha, I said "yeah, that's part of why we're here right now."  They jogged her with the sensors all over her for a full gait analysis.  Flexed her, jogged her some more.  I got on her and rode her, they watched and listened to her heart after some work. 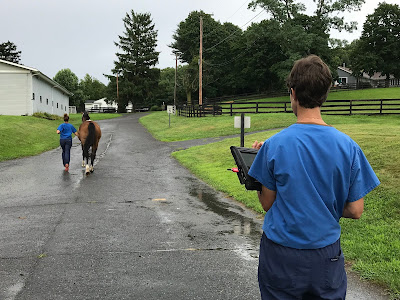 They took some images and scoped her airway.  The most significant finding was that she is a roarer.  She is a grade 2/4 right now.  It doesn't affect her, and while I'm not familiar with the condition beyond knowing what it is.  After reading up on it and Dr. Smith explaining everything to me as well as the option for tie back surgery if the condition ever does start to affect her I decided that was something I can live with. 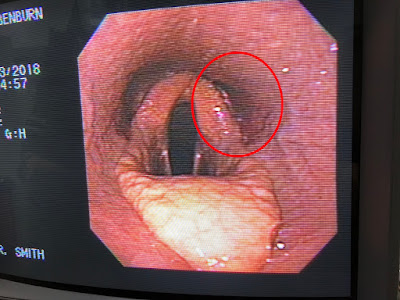 You can see the size difference between the two sides.

Should she ever need that surgery it is so common and fairly inexpensive that is something I would absolutely not hesitate to do for her.  And yes, I know there is the potential for aspiration and excess mucus after the procedure.  Some horses experience it, some don't.  She also may never need the surgery.  Here you can hear the noise at the canter:


They also detected a tiny heart murmur which seems to be incredibly common as well.  It is on the lower end of the lowest grade possible.  They listened to her heart after I rode her for a bit too so they could see if there was any alarming increase, which there was not.  And those are the only two things of particular interest.  They said she was actually in better shape than most, which is also impressive for a war horse.

Also, since I am admittedly not super familiar with OTTBs, in addition to discussing things with Dr. Smith I also asked my OTTB officianado friends about those two findings.  For the rest of the exam Ms. B continued to be on her best behavior.  Even when they turned the scope on she just pricked her ears and looked at it.  She is such a genuinely curious, interested mare.  She doesn't spook at odd things, she just likes to look at them.  If she was a human she would be asking "what is that?  What does it do?  How does it work?"  She also kept looking to me as if to say "Am I doing good?  Am I passing?"  When she had the scope down her throat they took the twitch off and she still just stood there. 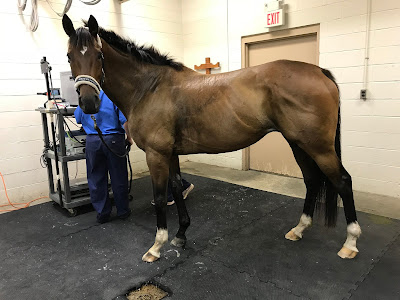 Her checking in with me face.  The look of "I'm doing good, right?  I'm passing, right?"

I drove home in silence, thinking about everything.  The Other Half really didn't ask me how things were going while I was there either.  I figured he was thinking I was wasting my time.  It was when I got home he asked me how things went.  I grabbed one of my little bottles of champagne, sat down, and said "she's as amazing as I knew she was and I am a moron if I pass her up.  I ride a lot of horses and you haven't heard me go off the deep end about a single one except her.  You know I wouldn't actually be this obsessed if she wasn't VERY special."  He said "I know, I know."  Turns out he definitely was not thinking I was doing something stupid or wasting my time.  He said he wasn't opposed to me going for it at all.  So, I texted my friend, "So, can we shake on this in the morning or what?!"  She said we could hug on it.  Cue my head almost floating off my shoulders. 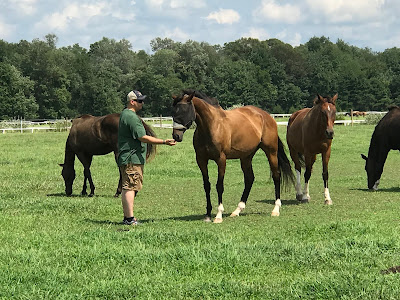 She definitely knows who her dad is.  She will nicker to him. 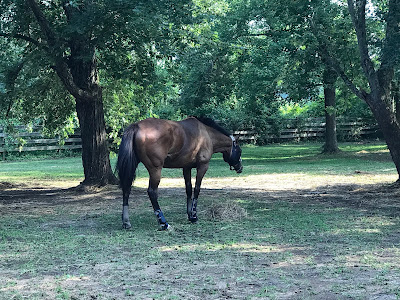 Hanging out at home for the day.

The next morning I drove down the driveway to the barn and as soon as I saw B out grazing my eyes teared up.  She was really mine.  She is a one of a kind, one in a million mare that just doesn't come along every day, every month, or every year.  Everyone at the barn has said how happy they are for us and how this was the only way it was meant to end.  They said she wouldn't be going like she does for just anyone, it's because we're meant for each other.  There is a reason she came along.  I feel like if I didn't make her a permanent part of this family she would have been the one that got away and I would forever regret it. 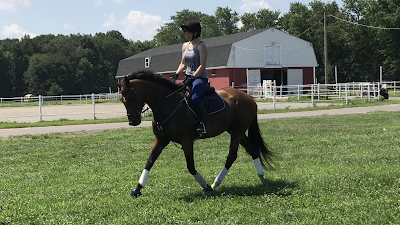 Our first ride as officially my horse. 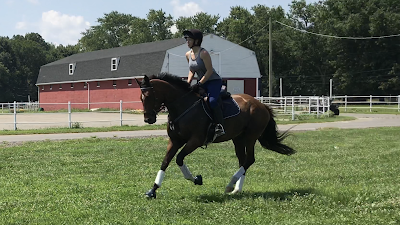 Posted by The Jumping Percheron at 6:54 PM