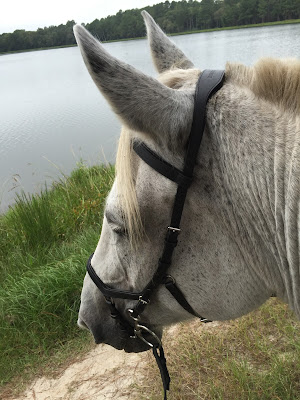 Klein mare facing her only fear.

I have never found anything that particularly scares Klein mare.  I have even tried my best to make scary things to see if I could find her weakness.  By scary things I mean going to a dollar store and buying all the obnoxious flowers and sparkling things I could find to put on jumps to see if she'd get looky.  Nope.  Or seeing heavy equipment roll through the barn and jumping on her bareback and trotting her after it to see if it caught her eye.  Nope.  Sonic booms and galloping under F-22's on final?  Nope.  Riding by an engine stand with a Chinook helicopter jet engine doing a full run up?  Nope.  Dragging things?  Nope.  Gun fire?  Nope.  Chasing down turkeys and having them fly up in our faces at a gallop?  Nope.  The list goes on.  Since we all know there is no such thing as a bomb proof horse, there has to be SOMETHING.  There is one thing.  Boats.

Big or small.  With or without motors.  Doesn't matter.  It can be a canoe or a bass boat, they're all the same to her.  She just can't seem to figure out what they are.  They are the world's greatest mystery to her.

So there we were last week, enjoying a hack around the lake with the resident Bald Eagle flying around over us when all of a sudden Klein stopped and went to red alert. 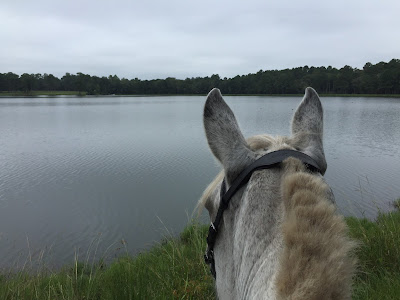 If you look closely at the picture above, to the left of her left ear, along the far shoreline you'll see a white dot.  That is a bass boat she spotted IMMEDIATELY on the other side of the lake.  It took me a minute to figure out what she saw it was so far away.  A damn boat.

One of the most scared I have ever seen her in the eight years I have owned her was when I was about to load her after a lesson and people were in a canoe in a pond a couple hundred feet away.  She did NOT want to get on the trailer and risk letting that monster out of her sight.  She would stop and snort and I could see the whites of her eyes.  I felt really bad for her because I could tell she was genuinely concerned for our safety and couldn't understand why I wasn't as scared as she was.  Finally she did load and we left as fast as I could start my truck.

Then one day the barn owner's daughter was out on their pond in the small canoe they have.  Klein was SO worried.  She was trotting around snorting and had Wes and Moch freaked out too because if Klein says something is wrong, then something MUST be wrong.  I was hoping being able to watch it from a comfortable distance would teach her it's nothing to be feared.  She's not convinced yet. 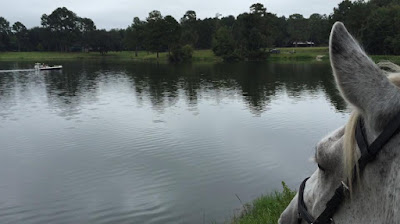 She was super hesitant going around the edge of the lake.  She wasn't thrilled with having to go over to the ramp where it launched either.  She never has a problem with the boat ramp but she KNEW that is where the monster entered the water.  She wanted to turn around so bad, she kept trying to turn back.  I made her go forward.  I trotted her and cantered her along with the dumb boat.  The guy turned toward us and started coming in our direction, I'm sure to get a better look at Klein because there's not anyone else that rides on this land so he probably doesn't see horses much and certainly not big, beautiful grey horses.  Little did he know he was causing Klein's anxiety to elevate.  It was kind of funny because here is Klein trying to keep it together and this guy is completely oblivious coming closer and waving to us.  I wave back and just kept Klein moving.

After we checked out the boat ramp I let her turn around and we started back around the lake.  I let her walk and trot but I was NOT going to let her canter or gallop and think that it was acceptable to run from the boat.  Once we got a good distance away and she relaxed, I let her gallop.  Then, as we're galloping we scared a BIG gator into the lake.  Klein could care less about that. 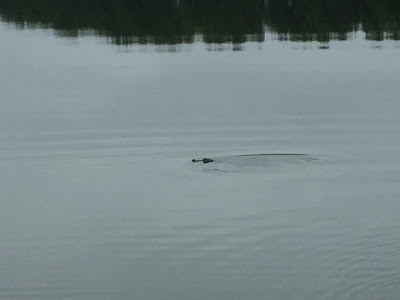 The gator keeping a watchful eye on us from the water.

In other news, everyone is feeling extra fresh because it is finally starting to cool off.  Wes has sprouted a winter coat and is already sweating excessively because of it.  *Sigh* life with a wooly mammoth coat.  Time for a clip already. 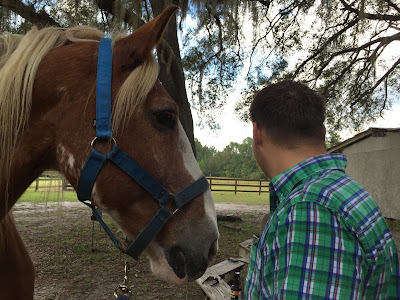 Wes with the Other Half after his pedicure last weekend. 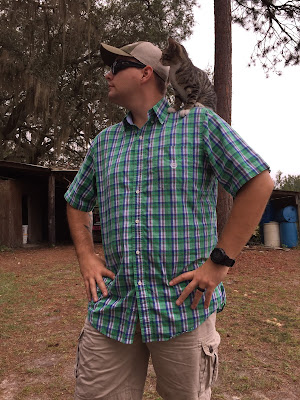 Remember that scene from one of the Ace Ventura movies, "Come to me, my jungle friends!!"  That is the Other Half, where ever we go, as shown here. 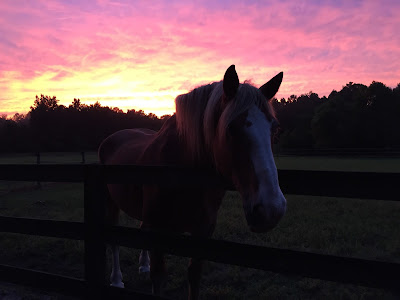 Wes in a beautiful sunset.

Oh and speaking of the Handsome.  Look at the absolutely BEAUTIFUL painting I received in the mail the other day from a family member.  It was a complete surprise.  It looks just like him!!!  It's hanging up in the living room. 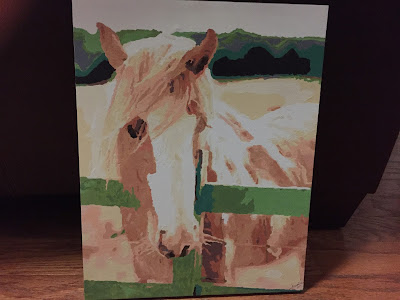 The painting came from the same wonderful lady that made the most thoughtful, amazing scrapbook for me.
Posted by The Jumping Percheron at 10:53 PM