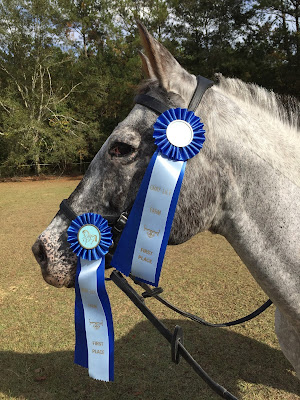 Mochs and I had another CT show last weekend.  I entered her in the same two divisions as last month.  She had been feeling a little tense this past week, so I didn't ride the majority of the week thinking maybe she was trying to tell me she was a little sore from some mile long gallops we did the weekend prior.  I did some stretches with her every other day and, gave her a couple liniment baths hoping that would loosen her up.  The classes we were entered in were small and I didn't feel like they would be too stressful for her after a couple days off.  I got an appointment with our chiro for the following week too.  That was the soonest she'd be in our area. 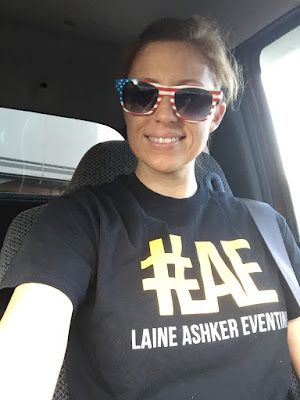 I was trying to channel my inner Laine for the day. 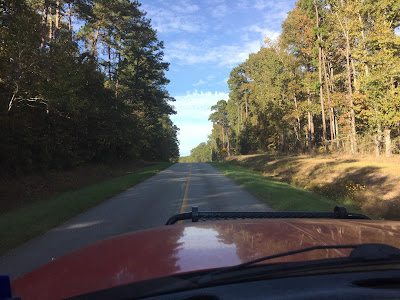 The road to this place just kills me every time.  I hate it.  It's SO tiny with lots of blind hills.  Any other way I would go would add too much time to the drive to be worth it.  This farm is already an hour and forty five minutes away. 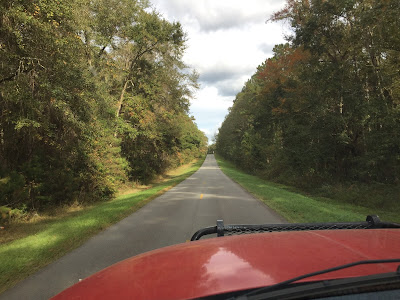 Gahh!!  I hate it!  Nothing makes you want to soil yourself like coming over a blind hill with a truck and trailer and someone coming up the other side in the middle of the road thinking they are the only person out there.  Come on people...

I already knew it was going to be hot that day, but...we ended up hanging around in the warm up for dressage for an hour and a half before we rode our tests.  Right as I was about to go ask how many more riders we had in front of us I over heard the ring steward say something about the ring running really behind.  Immediately after that I found out we had at least six rides in front of us, this was after warming up for about 20 minutes.  I asked the ring steward if she knew what happened earlier that put everything so far behind and she said that it was already behind when she got there.

In hindsight, I should have just taken Moch back to the trailer for a while.  I am just paranoid something will happen where we come up sooner than expected and miss our time.  We walked around the warm up and stood and watched some of the other riders.  It was hot.  Moch was being a good sport.  It was in the mid 80's and sunny, and there is no shade in the warm up.

She warmed up nicely.  She was relaxing and giving me some nice transitions.  Those couple days off were probably what she needed.  I felt confident she was feeling fine.

Finally it was our time to ride our first test.  Mochs was a little tense but I can't blame her.  I expected it a little bit after the previous week.  She also had been standing around in the sun for over an hour by this point.  After our first ride, thankfully, we had only two riders until our next ride.  In we went again and this time she was a little more resistant.  I didn't really care at that point.  I still gave my best effort while riding, but I knew it wouldn't be our best, and that was just fine.  We were hot, I knew I was already getting sun burnt, and I was starving.  So if that's how I felt, it's fair to say Mochs was probably expressing the fact that she was over it.  I'm not blaming the show one bit.  These things happen at shows, and I could have taken my horse back to my trailer for a while, but I didn't.

Surprisingly, our scores weren't as bad as I thought they may be.  We scored a 36.25 and a 38.75.  Really, I would like us to at least be in the low 30's.  Last month she scored a 32.81 and a 34.69.  I would have been happy with that again.  Though we did have some nice movements and she did score another 8 on her halt in the second test.  She got a couple 7.5's as well.  The judge also wrote "really cute horse" on one test and "adorable horse" on the other.  Her comments were mostly about needing to relax over her back, which was absolutely 150% fair and accurate.  I think the chiro appointment tomorrow will help that and we'll be ready to go for the next show in two weeks.

After we came out of the ring for our second test a lady stopped me and told me what a great little horse she was and asked if she was all App or if she was crossed with something else.  That was a nice compliment.  I think she's a fancy little horse myself.  That's my non-biased opinion of course.

Since everything was behind schedule, we walked back to the trailer, I gave Moch an apple, I ate my sandwich, got some water, changed tack, apologized to Moch for her not getting more of a break, and headed to the warm up for stadium.  At least by this point some clouds had rolled in too.

She warmed up very nicely for stadium.  Again, people were asking me why she isn't in a higher class with the way she's jumping, which is like 2ft higher than anything we jumped that day.  I told them the same thing as before, mentally she is at this height, once I can get her more organized around the course we'll enter higher classes. 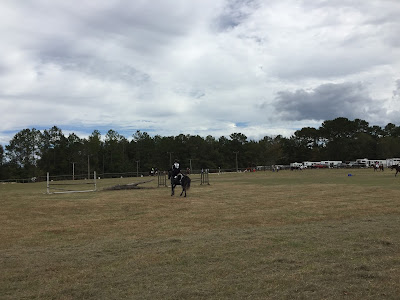 Stadium warm up with a skeleton horse for the Halloween themed show. 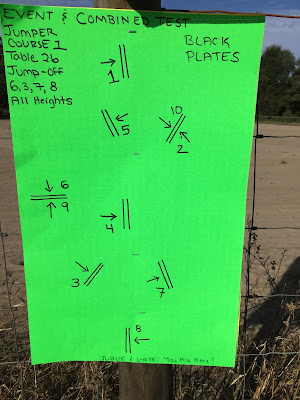 When we went in the ring Moch pricked her ears once and I thought it was at some brush at the ground line of one of the fences.  She didn't take anymore notice than that.  She was a handful but she did great in both rounds.  She was double clear on both rounds this time too.  At the show last month we had a rail in one of our rounds. 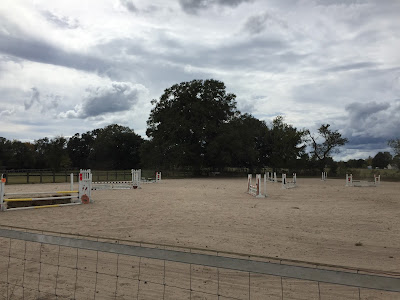 We watched a couple more rounds then I went to untack, hose her off, and give her a granola bar.  I brought her back with me to hand graze by the stadium ring to watch some more jumper rounds. 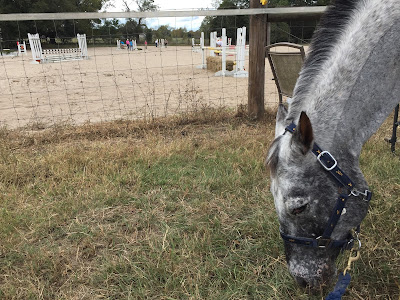 While watching the rest of the rounds a trend started appearing.  The majority of the horses were freaking out about that pile of standards and rails in the far corner of the ring.  Some didn't want to walk by it and others slammed on the brakes at the first fence.  I became even more proud of my little pony.  She didn't look twice at any of that stuff or so much as hesitate to any of the fences. 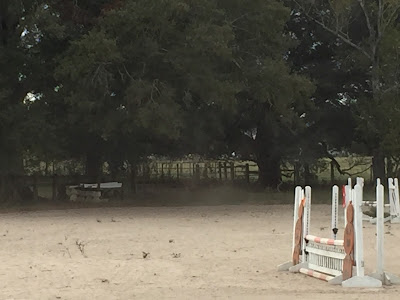 A zoomed in picture of the monster in the corner.

We won both of our divisions.  Though our competition was getting the bell wrung on them in the dressage ring, I genuinely felt bad for that.  No one wants to see that happen to anyone.  I feel like we won on the misfortune of others yesterday.  This show made Mochs eligible for the championships, so, we will be attending for both of our divisions.  Klein is eligible too for the Training CT division (USEA Training Level Dressage and 3'3" stadium), so I think The Odd Couple will make an appearance together.  It's been a while since I've taken them out together. 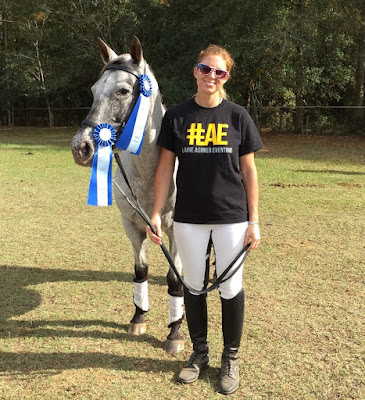 As for my lack of pictures from this show, The Other Half had a work obligation and couldn't attend.  He won't be able to go to the next one either and I fully plan on bribing a kid with $20 to take some video!
Posted by The Jumping Percheron at 8:50 PM