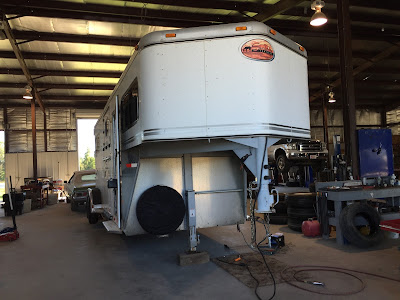 My trailer hanging out in the shop.

I unplugged it and sprayed some WD-40 on the plug and connector, nothing.  I turned the controller all the way up to see if maybe it was just the light that was burnt out, not likely with an LED.  No luck, I couldn't get the trailer to lock up the brakes, the controller was really not on.  I also had a theory that maybe because it was so wet out that morning that a connection had gotten wet somewhere and going down the road would dry it off and solve my problem.  I had about 15 minutes to make a decision.  Go, or stay.  And here is where my requirements for the Beast came to the rescue.  When I was truck shopping I was 110% sure I wanted a manual truck.  It took me a couple months to find the right one, but the Beast is a six speed manual.  I wanted it for a couple reasons.

In New Mexico there was an extremely steep mountain pass we had to go up and down on a regular basis.  You see the nose of your truck pointing at the sky coming up to the summit then you immediately tip over the top and see the valley floor below. 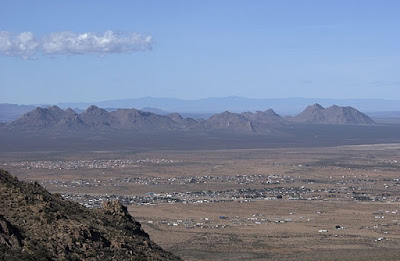 The view coming over the top of it on our way to Las Cruces.  If I wanted to ride XC or take dressage lessons this was the only way to do it there. 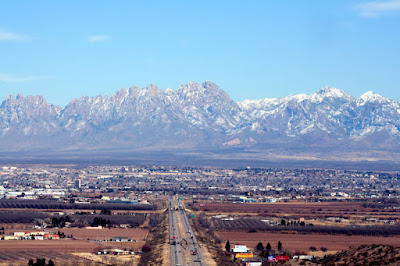 You can see some of the highway directly ahead, it was pretty much straight down from this point.  On the other side you could see out over White Sands Missile Range for MILES. 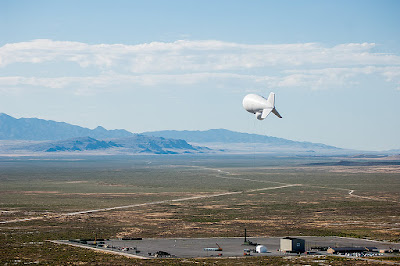 Speaking of, you know the runaway blimp?  Coming home over the mountain pass I would ALWAYS see this one at White Sands as soon as we came over the pass.

That thing was STEEP, and long.  It would get closed in bad weather, there were always disabled vehicles on either side of it.  It left a trail of destruction every time I drove it.  The disabled vehicles would either be overheating or their brakes were burning up (cars, semis, etc...).  As much as I wish the Beast had a jake brake, it doesn't (some 2500's DO have them, but they're rare).

What the Beast does have is six gears, letting me have the ability to down shift it to 5th and let it go down the pass, enabling me to rarely have to touch the brakes.  I know you can downshift automatics, but...what happens if you blow up your automatic transmission?  You're stuck.  If something happens to a manual it most likely loses a gear.  No problem, skip that gear and go to the next, you can atleast get your rig to a safe stopping point if need be.  But what if you lose your clutch?  You can shift a lot (if not all) manuals without a clutch if you just hit a certain rpm.  Again, not stuck.  But what if you have US Rider and they can come rescue you (I have them too)?  Well, what if you are in the hot ass New Mexico desert with no shade, horses in the trailer, and US Rider saying they're two hours away from you because of your location.  I'd rather just have that option to limp the truck and trailer somewhere that I can wait for them that is not on the side of a hot desert highway with no shade for miles.  Border patrol stations were never far on the highways of New Mexico and they have a BIG overhang they make you pull over under, I know because they make you stop under it so they can look in your trailer for illegals.

I try to be as proactive as possible.  Anyway, back to my brake controller not working.  My truck doesn't know it even has a trailer on when it's empty and has almost the same feeling with Mochi in it.  We were not traveling on major highways or high traffic areas.  We were traveling on back roads with a couple cars here and there.  I decided to go and just start slowing down sooner and with down shifting I wouldn't really need my brakes too much.

My plan worked perfectly.  If I would have felt like the trailer was pushing the truck, or it was taking too long to slow down, I would have turned around immediately.  No issues, we had a great day and a successful show.

I dropped the truck and trailer off at the shop that next week.  Since they had it I told them to just go ahead and inspect the trailer and pack the bearings while they were at it.

Turns out my brake controller really died, so I ordered a new one and they installed it.  Also turns out that my trailer's brake shoes were cracked, so the trailer got new brakes.  When they were testing the brake controller they found some issues with the wiring.  I thought I had a light burnt out but the light wasn't the problem.  They actually had to rewire a lot of things on the trailer due to some work I had done on it previously from a non-professional source, yeah...lesson learned, even if you know someone that seems competent, just pay a professional.  The brake controller going out was actually a good thing.

I told the shop just do whatever the trailer needed.  This shop is the same one that did the transfer case on my truck and has done great work on my Scion and one of my husband's cars.  They are an honest, hardworking group and I trust them.

We went to pick up the truck and trailer and the lady at the front told me to please not have a heart attack when I saw the bill.  I was full expecting AT LEAST $600.  Well, I was half right.  $600 was half of the bill.  The total?  $1,217.  I had my debit card out and took a second to read the bill to see what all they had to do.  The Other Half immediately handed them his debit card while I was reading.  $600 of it was labor for chasing down the electrical demons.  Funny, because earlier just that same week a friend that used to be a mechanic told me "Oh I used to HATE working on trailers!  They're such a pain to wire!"  These guys even drew me a whole new electrical diagram for my trailer and told me to make sure I keep it in case someone else has to work on it some day.  Sure, it's $1200, but I know it's $1200 for QUALITY work that I can trust, and that's priceless when there are ponies involved.  So really, $1200 is chump change for pony safety. 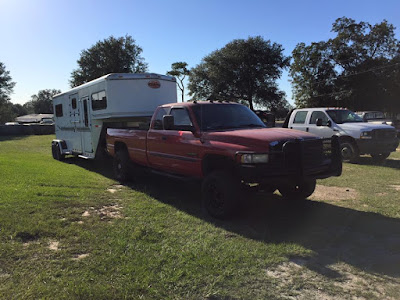 Woo hoo!  All fixed up and ready for more pony adventures!
Posted by The Jumping Percheron at 9:54 PM