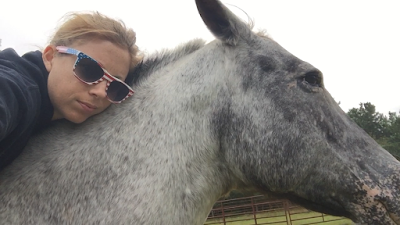 She puts up with my stupid human ideas, like laying on her in the pasture while she wanders around.

Lately I have been teaching Mochi new gymnastics.  I had schooled her through a couple lines when I first got her but nothing since then until the past two months.  I'm 99% sure these are the first gymnastics she's ever seen in her life, and that's too bad because gymnastics are such a great training tool.

Since we have been working over ground rails she has become more comfortable and there's no rushing.  I have laid canter poles out too in preparation for bounces or one strides.  Last month I introduced her to a one stride with cross rails and let her get comfortable with that.  Now that she is super familiar with ground rails in front and behind jumps, in a line, and with verticals I set up a line of little verticals for her last week.  The first time through she nailed it.  The second time she started to add strides.  I have a video of her adding strides.  I put my leg on more to keep that from happening and she flowed through the line of one strides again with no issues.  I didn't get a video of that because it was too dark by then, since iPhones suck at taking video in low light.  I barely got the one of her adding strides. 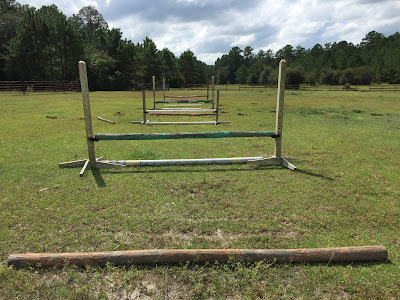 The line of verticals set at one stride each.  I set them up earlier in the day, then rode that evening, that's why this pic is so bright and the video and other pic are darker. 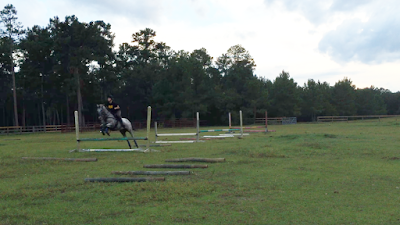 Here's the video of her adding the strides:

At first she was definitely thrown off with the bounce.  I started with her just going through the bounce and cantering ground poles set at 11ft then raised the first vertical.  When it was the bounce to one vertical she was thrown off but still went through the line, though it was a little awkward.  It took her twice and then she nailed it.  She totally had it figured out and nailed the whole line in perfect rhythm.

I was super proud because she used her brain and didn't let her brain get the best of her.  She can get mentally wound up so easily but today that didn't happen.  This is a pony that, when I first bought her, would approach four ground rails set at the canter and canter the first, trot the second one, jump the third, and canter the fourth.  It was like she was playing hopscotch with ground rails.  Those days are gone, thankfully.

Not only is she comprehending gymnastics, she is starting to USE her neck properly.  When we first started, she would look like the knight from a chess set over fences.  Hackamore, bit, whatever, she'd still do her best impression of the knight chess piece.  Her front end still needs some work, and gymnastics are cleaning it up.  She actually snaps her knees up most of the time, I have some pics somewhere of it.  Today they're not looking as good as they could, but she still did awesome.  I couldn't have asked for any more. 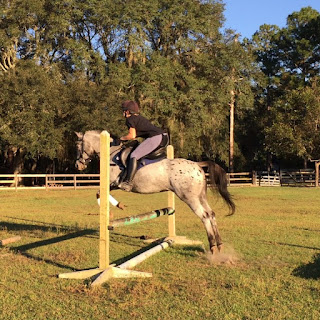 So, don't judge me yelling good girl in my video.  Mochs soaks up the praise so I make sure to make a big deal when she is learning something new and does a great job.  Sometimes she needs a little confidence boost so I make SURE she knows what a good pony she is.

Posted by The Jumping Percheron at 9:49 PM