Intermission, and We're Back 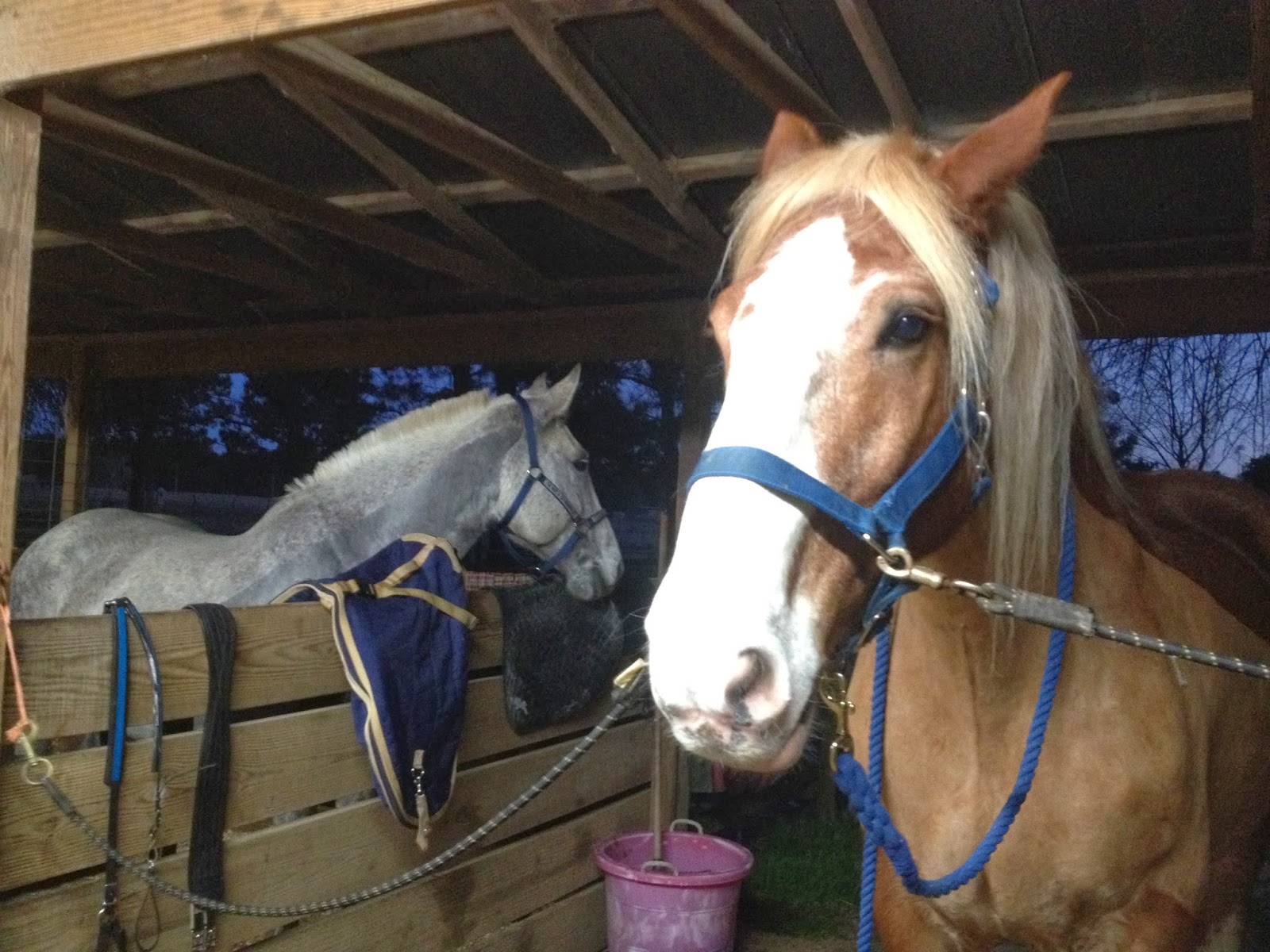 Everything has been going great as far as Wes continuing to settle in.  I haven't posted lately because I have been studying for a huge test.  That's over now, so we can get back to our regularly scheduled program around here.

A lot of people have asked if I think Wes will fit in my trailer.  I was 98% sure he would since it's a pretty roomy trailer and it's 7'6" tall. 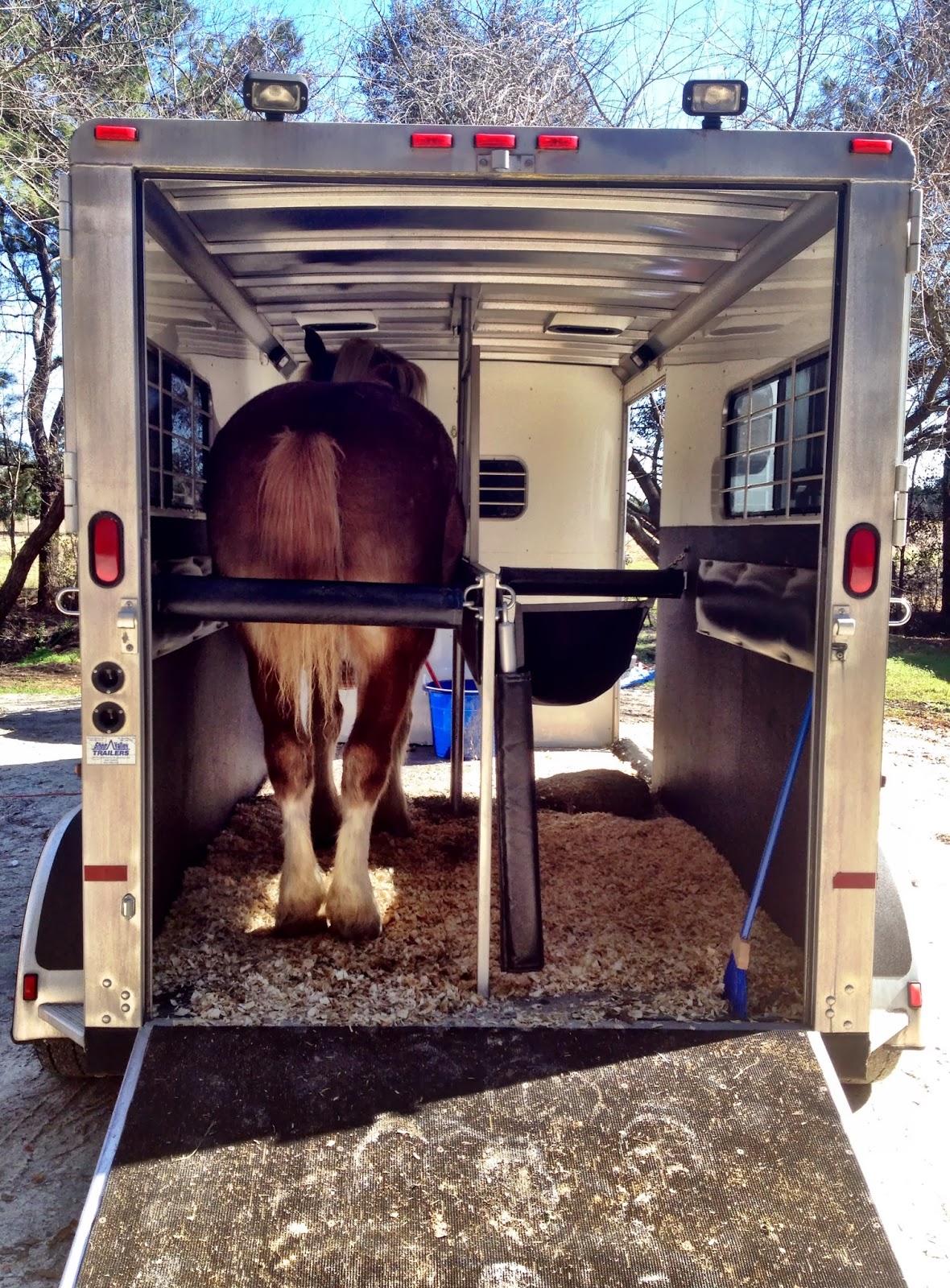 I'd call that a win. 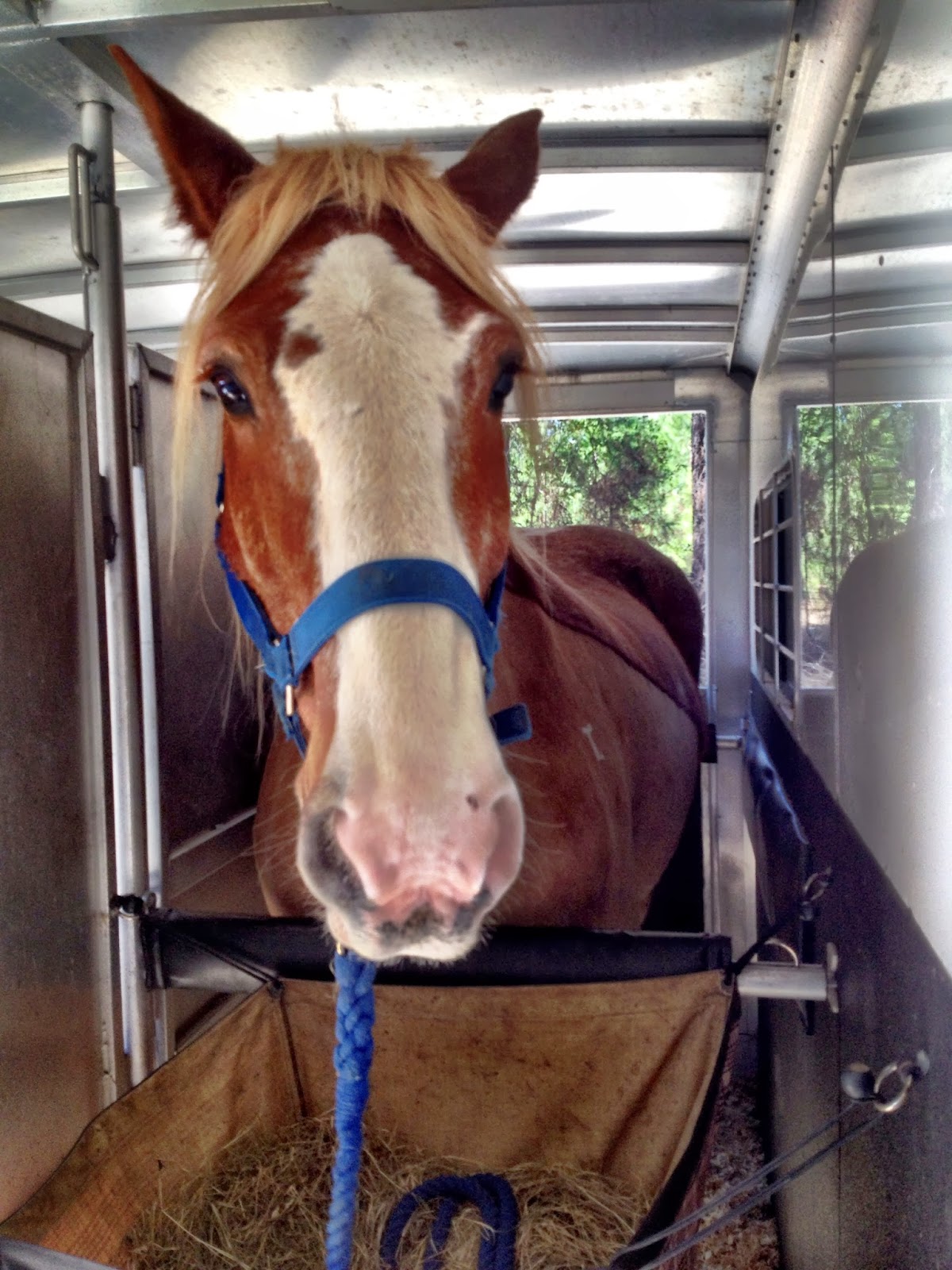 You can see the fit a little closer in the second picture. He does have some room on either side.  He is not squeezed in there.  I wouldn't do that to him if it was a tight fit.  I actually told him before I loaded him "Ok, Wes, I just want you to know that I just want to load you ONLY to see how you fit on the trailer and make sure you would be comfortable.  I PROMISE you that you are NOT leaving this property."  I walked him up to the trailer, he sniffed the ramp, then walked right on no problem. 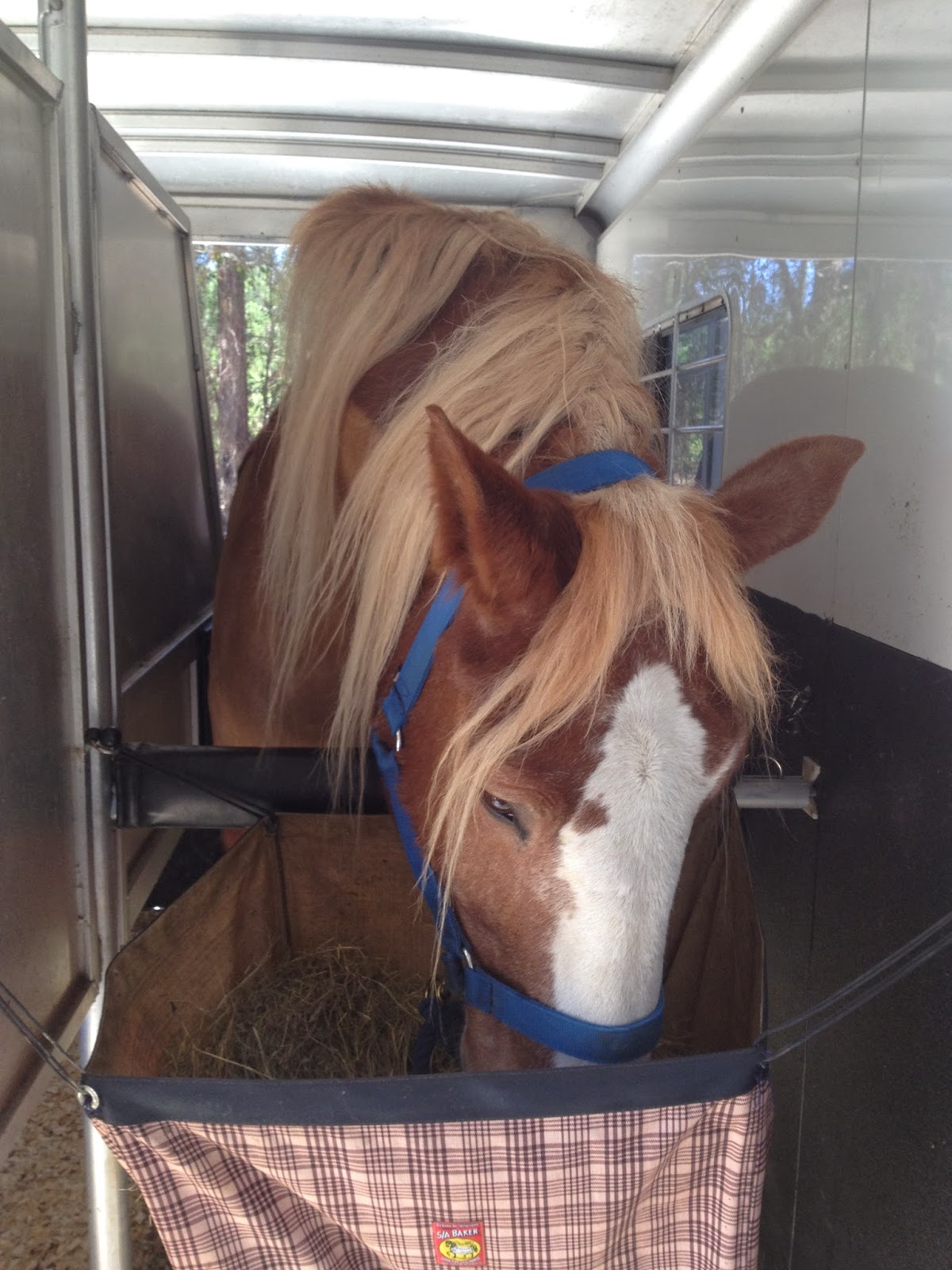 He has still been just the quietest thing in the world.  He'll talk a little bit when we go on our walks.  He wants to meet every horse we see on our walks too, it's pretty adorable.  I'm so used to Klein not acknowledging any other horse's existence.  Moch doesn't give much attention to other horses either, she'll look at them but that's about it.  Wes sees other horses and wants to go straight for them to say hi and introduce himself.  He is the most social butterfly of a horse I have ever known. 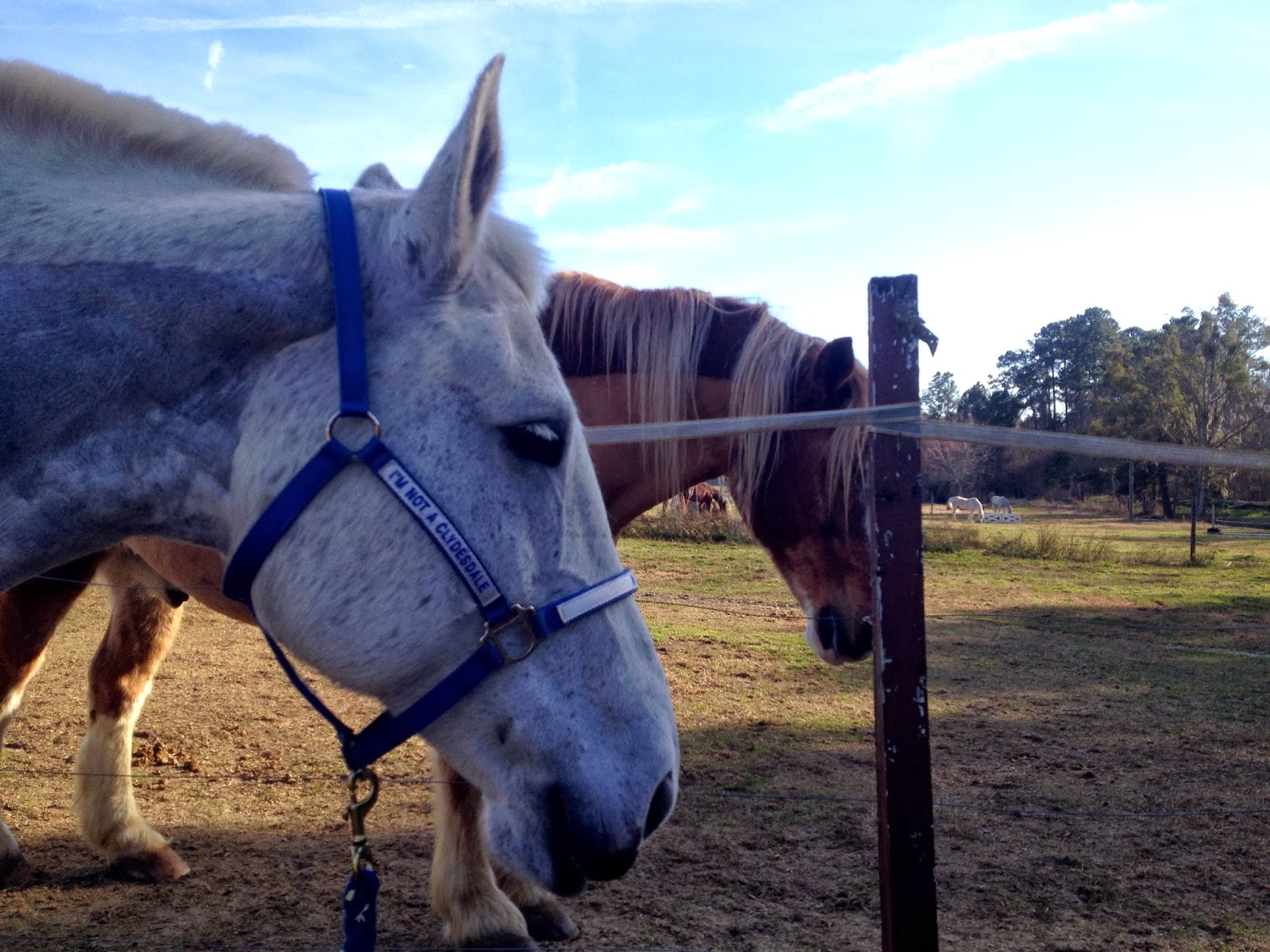 Wes trying to be nonchalant about wanting Klein's attention.  He had been standing there looking over at her so I walked her over to him when I went out to get her.

Wes continues to want to meet his sisters.  He KNOWS who they are.  He will stand by the fence that divides their pastures and just look longingly over at them.  I walk them over to him and they are starting to realize he is here to stay.  His expression is always about the same as it is in the picture above.  He can't make it anymore obvious that he is not here to step up to anyone, he just wants to be friends.  He is a follower, he has never been a leader.  He just wants acceptance, not power.

Wes is also running around with his friends on a regular basis.  His hind end is starting to already loosen up too!  I can tell the difference when he gives me his back feet.  When he got here I had to hold them for a minute until he was able to relax and stretch them out to me.  Now there is hardly any wait for him to stretch them back into my hand.  Turn out does a pony good, people!  It hasn't even been a month and I already see improvement!

Our DAEP will be out next Monday to do Klein and Mocha and check Wes' feet.  They are already starting to change too.  They are exfoliating and responding to having no shoes and the new environment they are exposed to.  He is still unaffected by being barefoot, hasn't been sore one bit.  I kind of thought he would be because he's been shod for so many consecutive years.  He has good feet, and our DAEP is awesome so that right there is a winning combination. 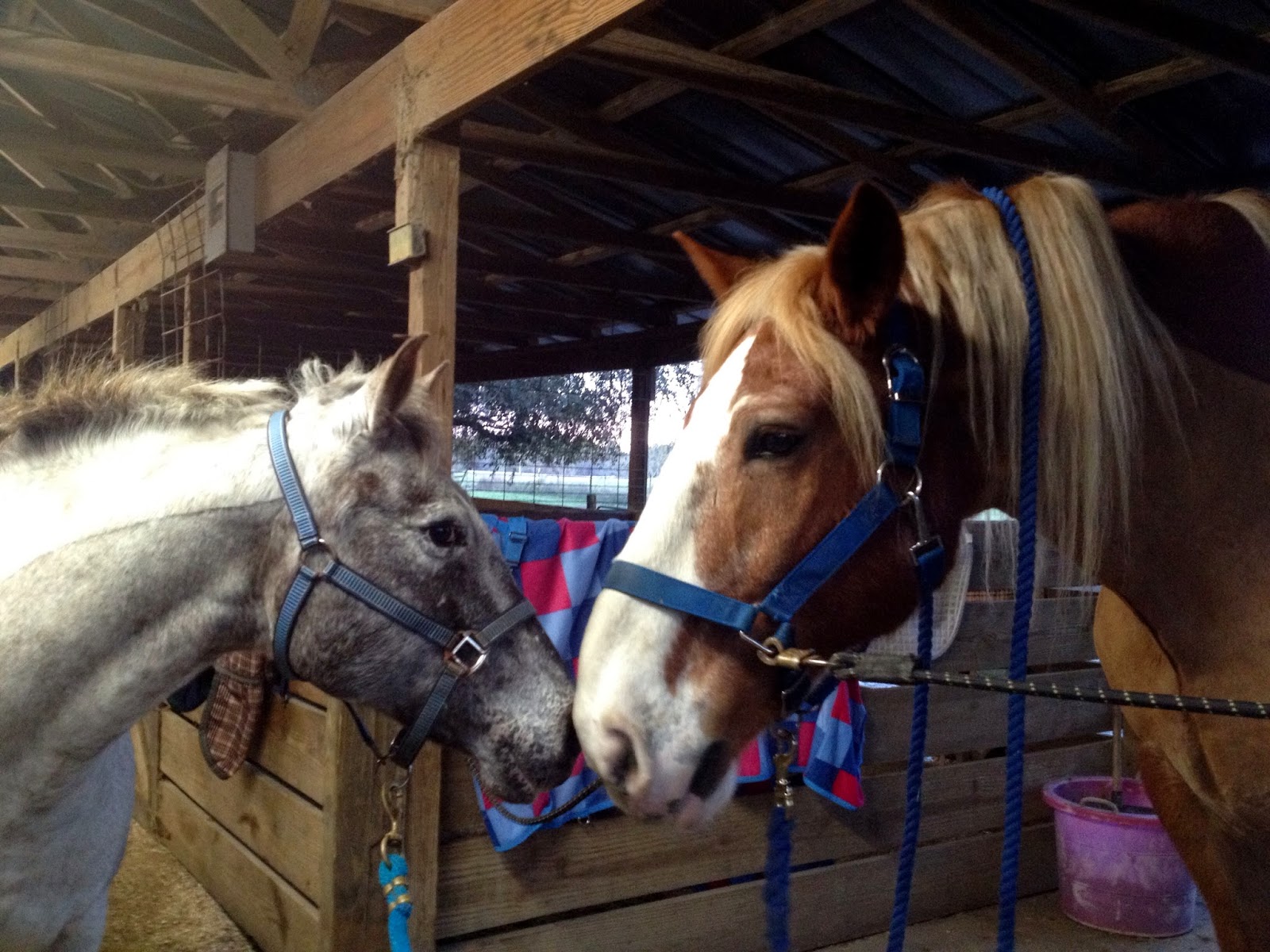 Moch is starting to accept him too.  Look at his expression, these girls could do whatever they wanted to him and he would STILL want to be friends.  He's such a sweetheart. 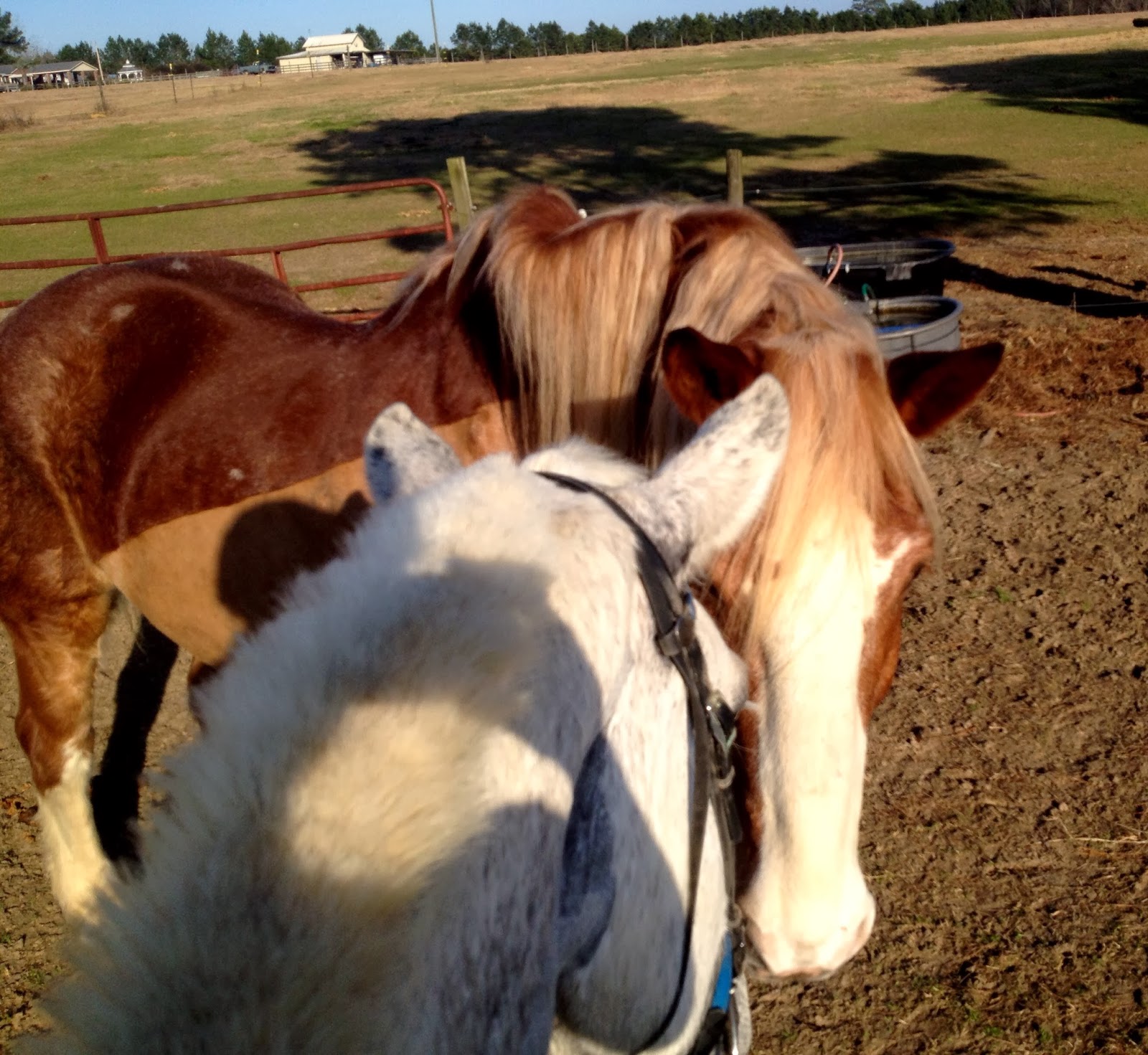 Klein was being polite.  I think me being on her back for this influenced her decision to be nice to him.  I kept telling her, he is part of the family and to be nice.

Speaking of Klein...my girl has been putting in some awesome work lately.  We have been schooling 3'-3'3" and one evening I put up a 3'6" just for fun. 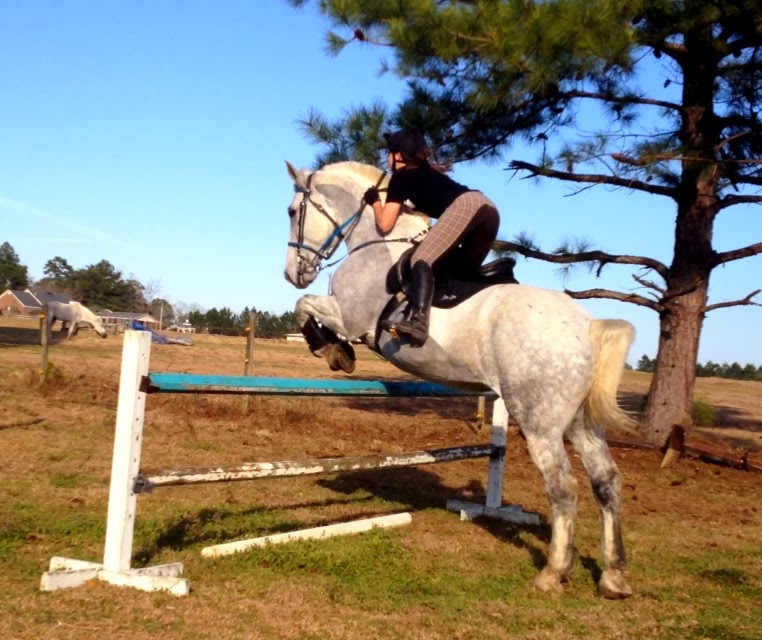 One evening I set up some 3' lines with verticals and oxers.  Here we are working through the vertical line:

We have worked on some dressage lately too.  We had a really great dressage ride last week but the two since then have been not as great.  Not horrible but I think Klein's attention would rather be elsewhere.  We just have to get back on a regular dressage schedule. 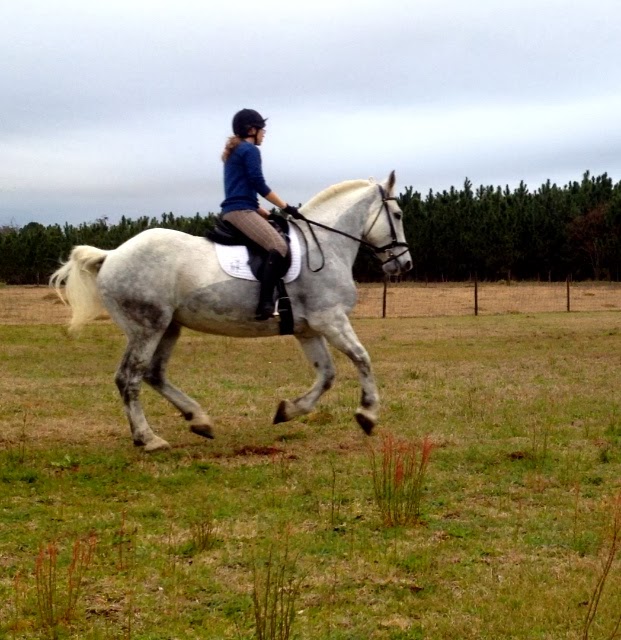 Fighting the urge to gallop. 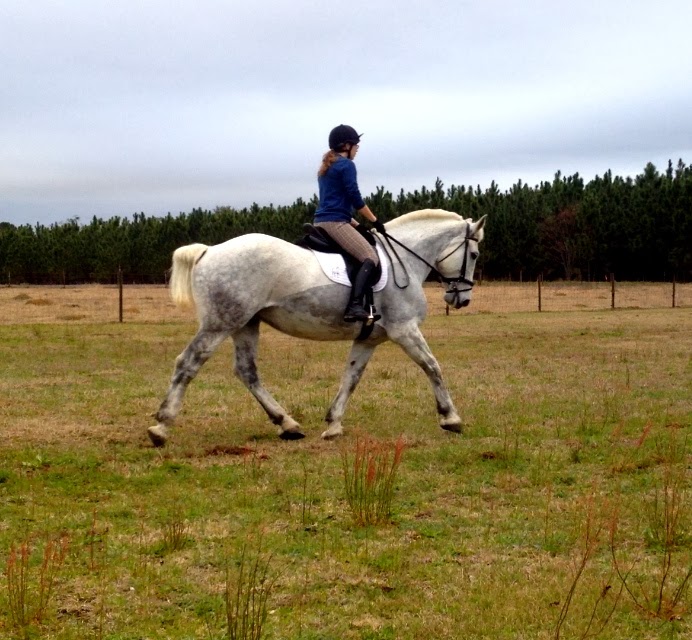 Trying her best to concentrate.


The Most Amazing Boyfriend in the World aka MY Boyfriend surprised me with the book "The Percheron Horse in America" and a really cool black and white print of a Percheron stallion.  I have had to tell myself to put that book down to finish my studying this week!  I can't wait to read it and post some of my favorite quotes out of it on here. 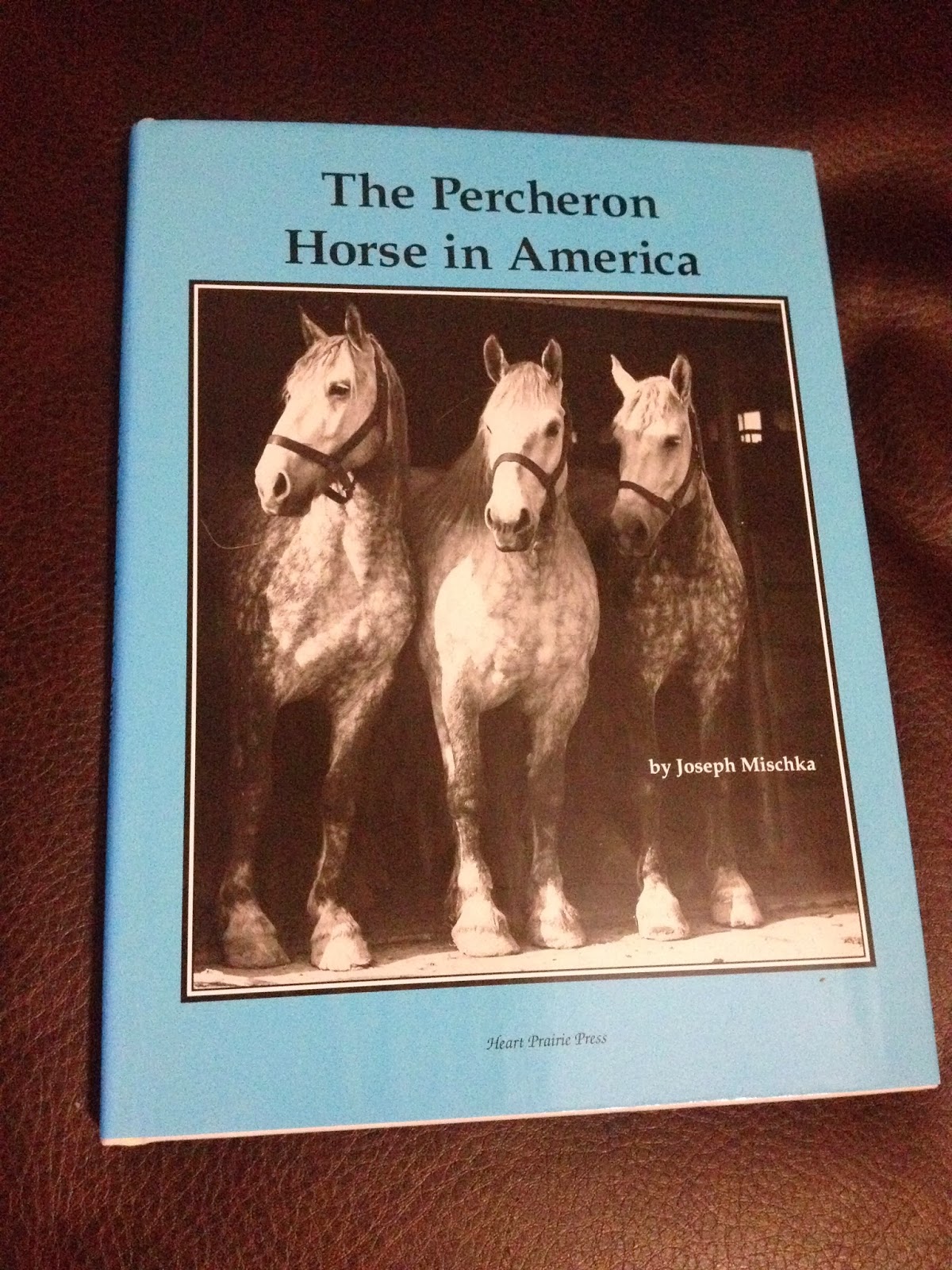 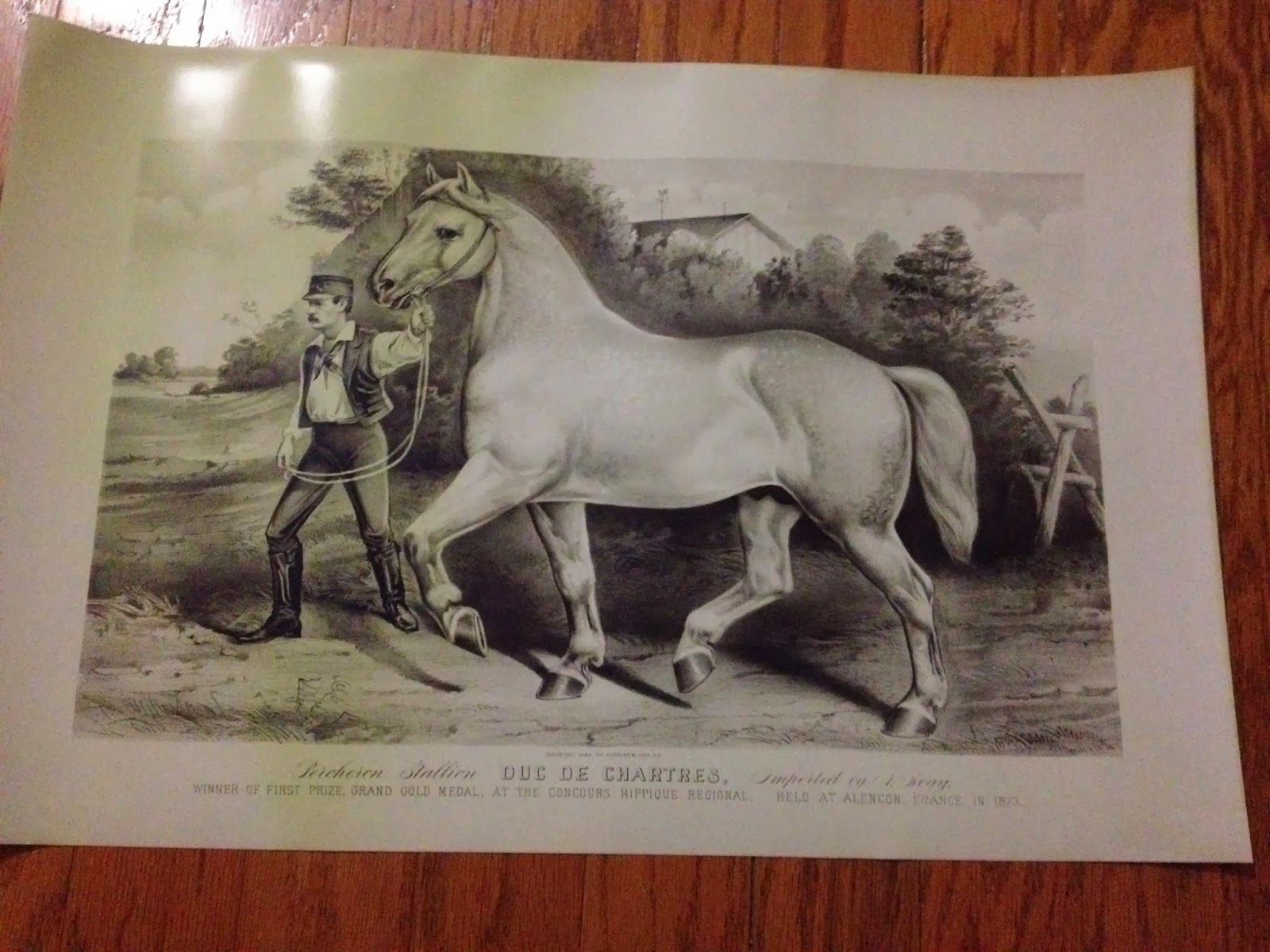 Now to pick out a nice frame!!
Posted by The Jumping Percheron at 11:07 PM