Wes Enroute, and One More Reason to Love Brook Ledge Richie, one of Wes' drivers, texted me this picture from the Brook Ledge cameras!  This was as they were passing through Dallas yesterday!

Ready for a crazy twist to this story?  I knew the next stop for Wes was going to be in New Mexico to pick up another horse, after he left Salt Lake.  I didn't think much of it.  I woke up yesterday morning to a Facebook message from a friend that lives where Klein and I used to live when I was stationed at Holloman AFB in New Mexico.  It was HER HORSE they picked up after Wes!  She said the drivers were talking about their trip with her barn owner and when she heard "Wes" mentioned she knew it was him.  She got on the trailer to say hi to him and told him his mommy can't wait to see him.  She forgot her phone or she would have taken a picture. Crazy!  Crazy that my friend saw him, crazy that our horses are shipping together.  What are the chances?  Of all places to go in New Mexico!  Crazy that Wes stopped where Klein and I used to live.  We also found out that Richie is the SAME driver that picked up Klein at Holloman!!!  He said he knew he recognized the place and he remembers going on base and how the barn was pretty far back on the base.  Wow.

Richie called from Dallas yesterday afternoon when they stopped to check everyone's hay and water.  He said they were watching Wes on the cameras and he was looking at the windows taking in the sights.  He said Wes was just hanging out, being a good boy, drinking and eating just fine.  That's my boy!!  Richie texted me the pic of the camera screen of Wes!  The text said "Hi mom!"  What a great company.  I just can't say that enough.  This is why I am a repeat Brook Ledge customer.

There was a slight change in Wes' travel plans, of course Richie called me to update me as soon as they knew about it.  The drivers thought they weren't going need to stop at their Lexington facility but it turns out that they did have to go to Lexington.  Wes is currently at the Brook Ledge Lexington facility.  He got in last night.  I talked to one of the guys at the barn just about an hour ago and he said Wes has been quietly watching the barn activity from his stall.  I just wonder what is going through his head.  There are pictures of the Brook Ledge Lexington barn on their website:  www.brookledge.com if anyone is interested.  The guy I talked to told me they had a couple three and five million dollar horses in the barn this week.  They treat every horse with the outstanding care, no matter if they are a five million dollar horse or not.  Wes is in the same barn they would be with the same high standard of care.

Also, they are going to build a DOUBLE box stall for this next trip from Lexington.  I mean, look at the first picture I posted, you can tell that box stall is already HUGE.  Wes is traveling in the lap of luxury, they basically hooked him up with the VIP Penthouse Suite.  They will be leaving Lex at around 3pm this afternoon, so Wes will get in late tonight.  They even asked me what was the latest they could drop him off.  They did this with Klein too.  They were going to Ocala after they dropped Klein off and they told me that they would be coming through Valdosta at around 2am and could drop her off then or if I wanted to SLEEP IN they would drop her off in the afternoon on their way back up through Valdosta.  That was very nice of them but I told them the same thing today that I said with Klein, you guys tell me when you'll be here, I will be waiting.  No time is too early or too late for me!

I posted a picture of Wes loading on Draft Horse Friends, a Facebook group with thousands of members worldwide.  Draft Horse Friends is a group where draftie owners can share pictures of their beloved gentle giants.  I love seeing everyone's babies on there and the different things they do with them.  Wes' story took off.  That first picture I posted had over 2,000 likes, almost 200 comments, and shares all over the world in less than three hours.  The comments were so great to read, everyone wishing us well and saying our story brought them to tears.  So, I'd like to say hi to all my Draft Horse Friends that are checking the blog world wide awaiting Wes' arrival!

I have taken leave starting today for the rest of the week to wait for Wes to arrive and to spend time with him.  So this morning I had some free time.  It was misting out so I decided to wait for it to clear up before heading to the barn (which it did, it is currently sunny and 80 degrees).  What do you do when you can't go to the barn and you're waiting with a ridiculous amount of anticipation?  Keep calm and Crossfit on. 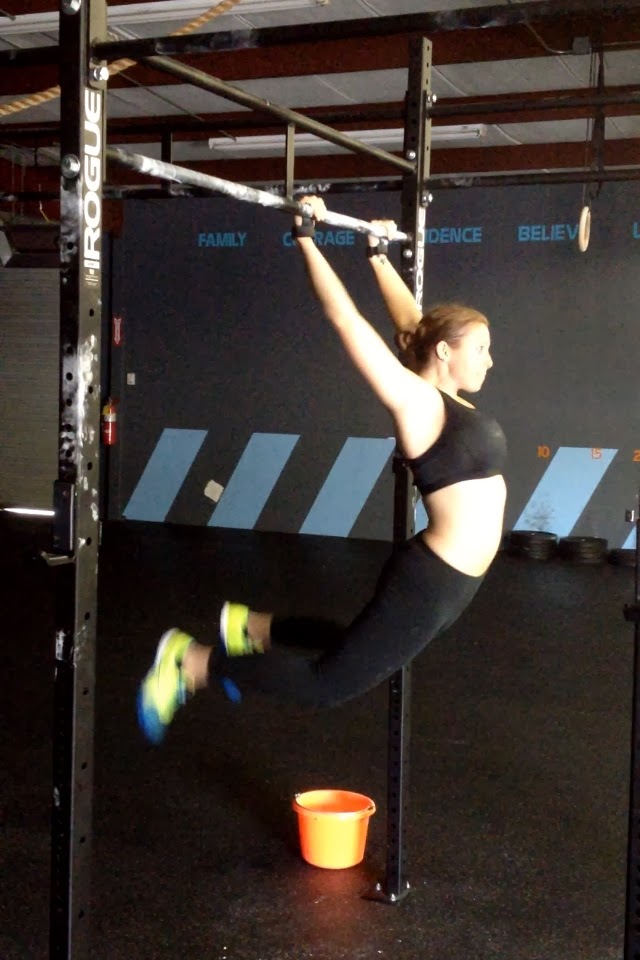 Putting in some extra work on kipping pull-ups after this morning's WOD.
Posted by The Jumping Percheron at 1:27 PM