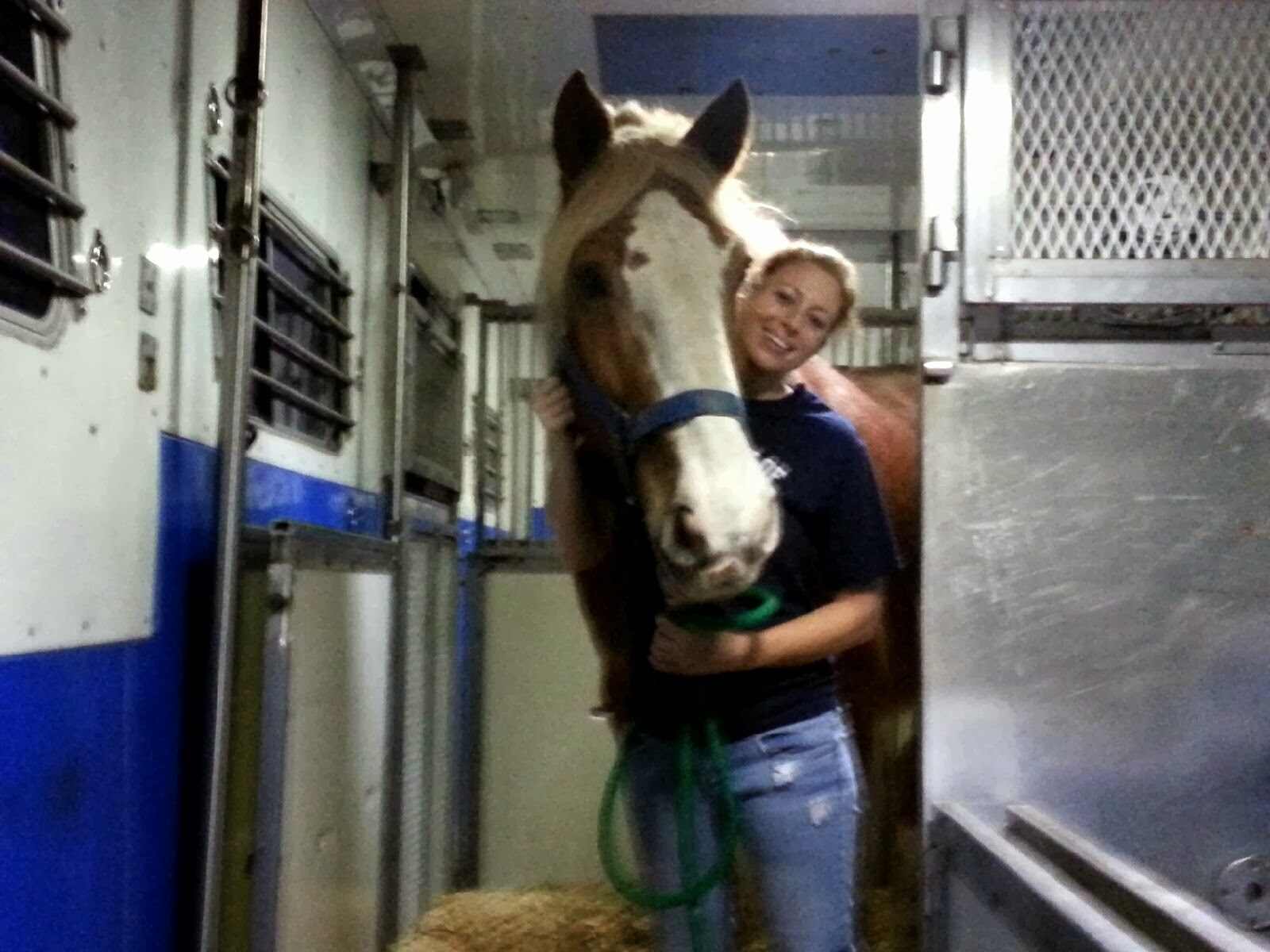 Brook Ledge was right on time this morning!  They even let me unload my boy!!!  Mike said they would be there at 2:30 am and I told him to just give me a call when they were an hour out.  At 1:30 am my phone rang!  I already had my supplies ready to go:  Wes' favorite treats, carrots, and some champagne and orange juice for mimosas to celebrate. 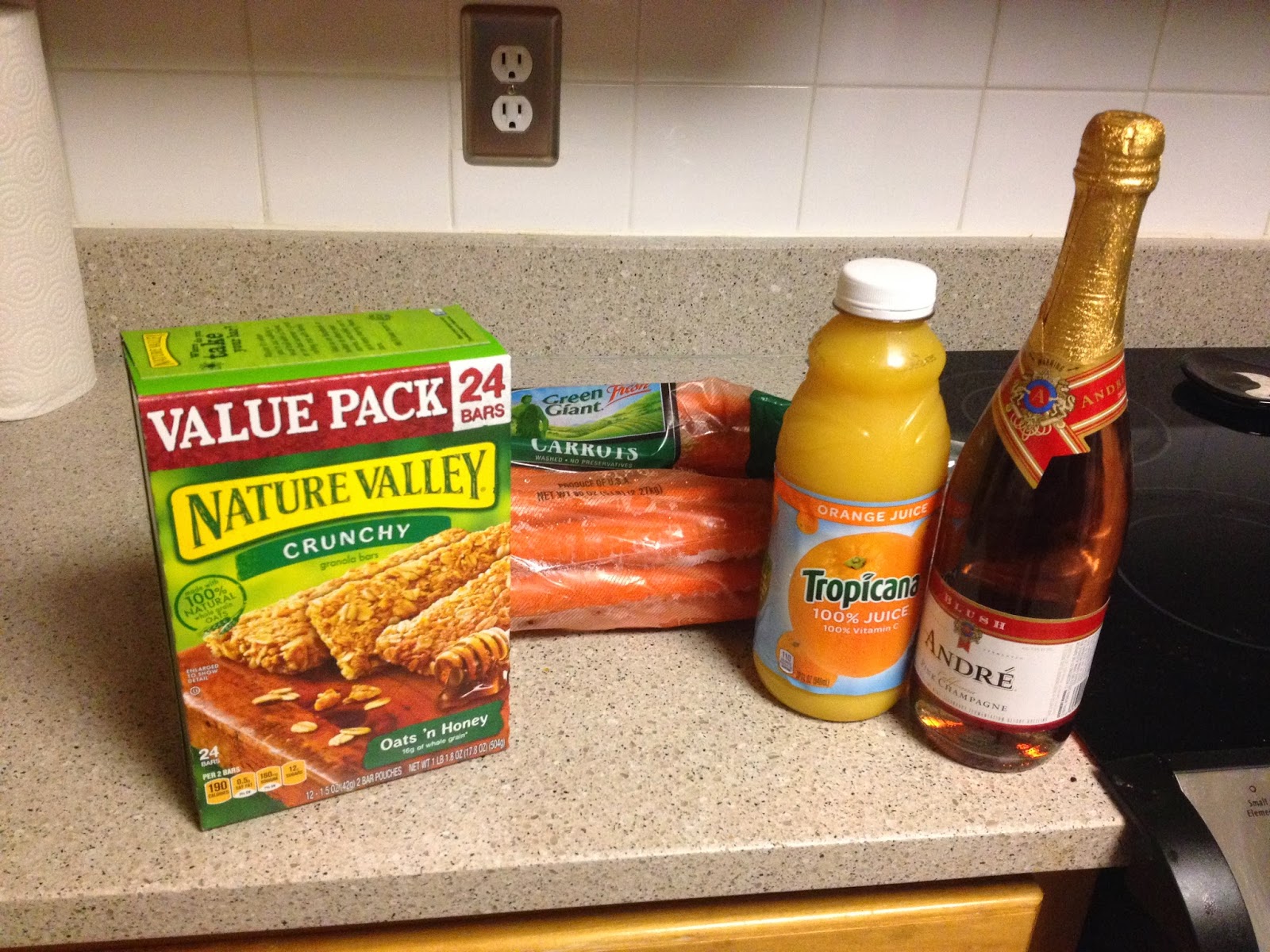 Yeah, don't judge the Andre champagne, it gets the job done.

I headed out the door and was trying not to cry most of the way.  I did pretty good until I passed the exit from I-75 that they would be coming off of.  To think that WES would be with me in a matter of minutes still was just really hard to comprehend.


YEAH!!  Thank you so much again to every one that has donated to the Bring Wes Home Go Fund Me page, Brook Ledge for taking such outstanding care of Wes on his journey home, and my awesome boyfriend that told me one day "If you are going to start that donation page for Wes, you better get on it."  I made it that night. 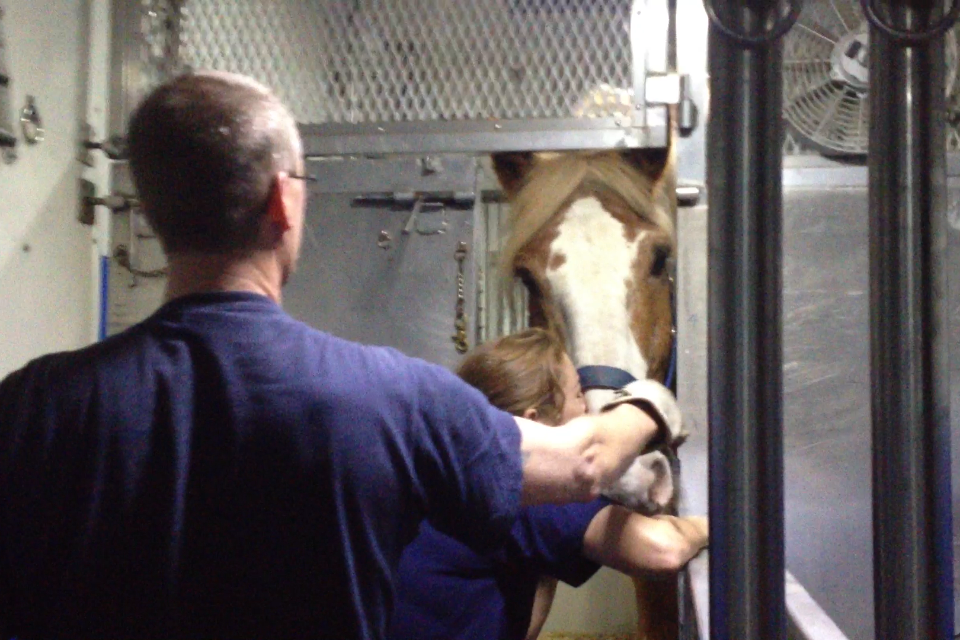 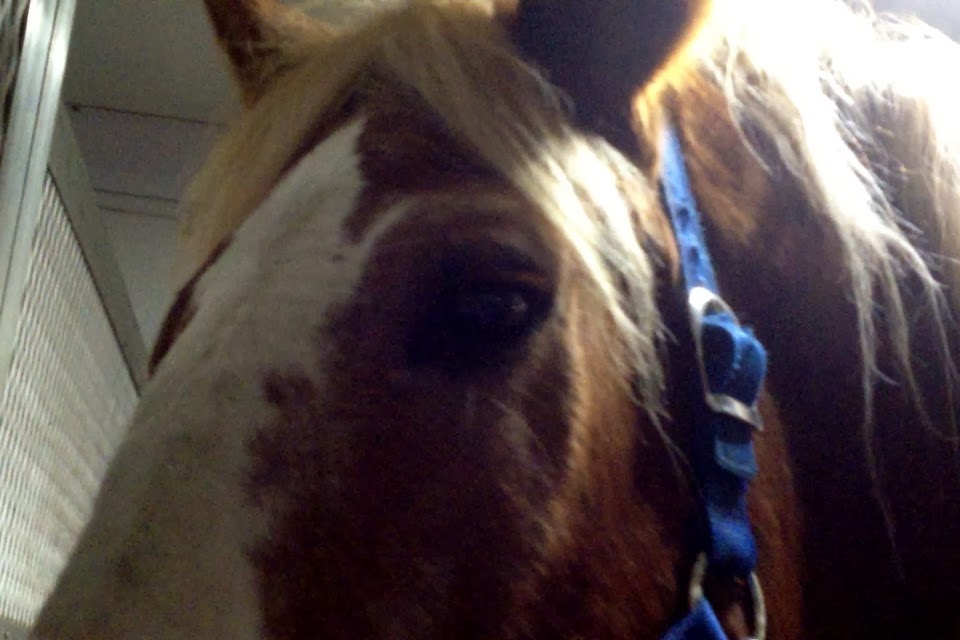 Sweetest boy in the world.  Just look at that kind eye. 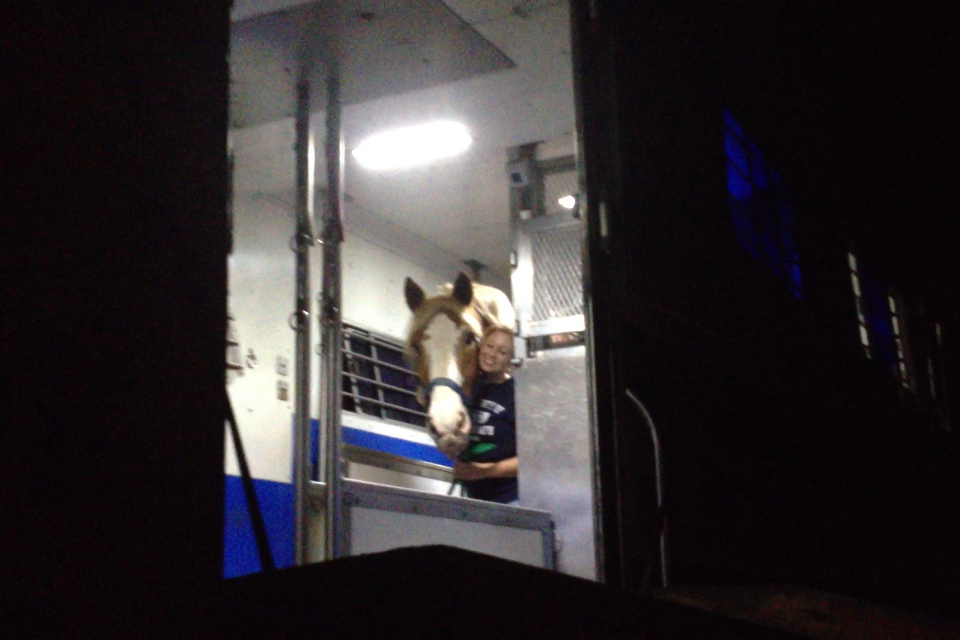 Our first 10 minutes together was spent walking down the road in a the dark with nothing but a head lamp. 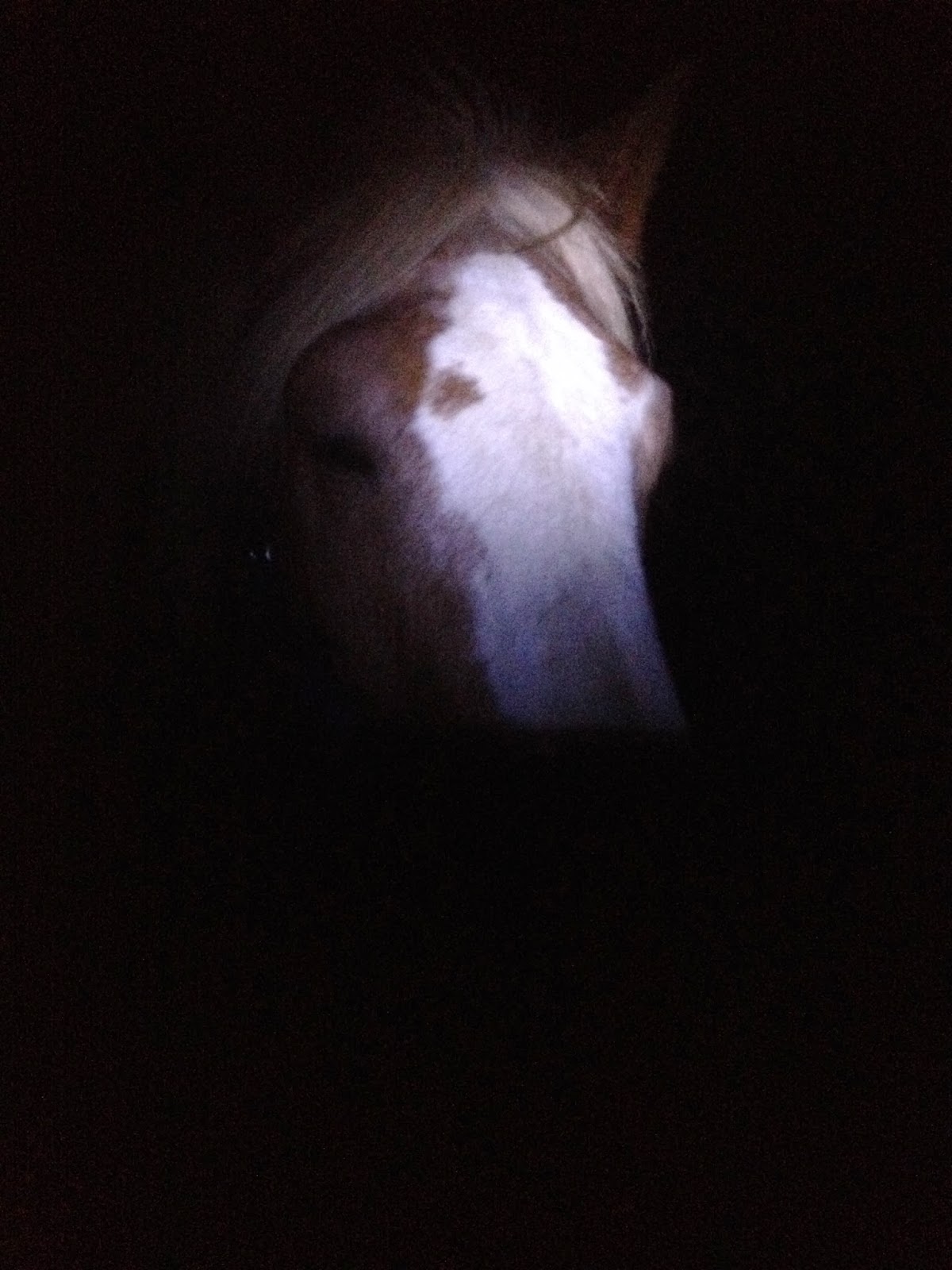 Walking in the dark.

The road to the barn isn't lit and it's a narrow dirt road with ditches on either side aka no fun for a semi truck.  I had them drop Klein off at the end of the road too.  We can walk, besides it must be nice to get a little walk in after standing on the trailer for hours, right?  I just talked his ears off the whole time.  Asking him how he liked the weather because it was 74 and breezy when he got here this morning and 31 when he left Salt Lake.  I also asked if he remembered going through drive thrus, all the proposals we did, all the brides and grooms we picked up, the funny drunks we picked up, the times we took the wagonette out (it can hold 10 people) and it was full and I had to keep asking him to just walk please, the time we took some Christmas carolers and they clapped during one of their songs and spooked him just a little, the protesters that would yell at us, the first night I took him out downtown to work, etc...  You get the idea. 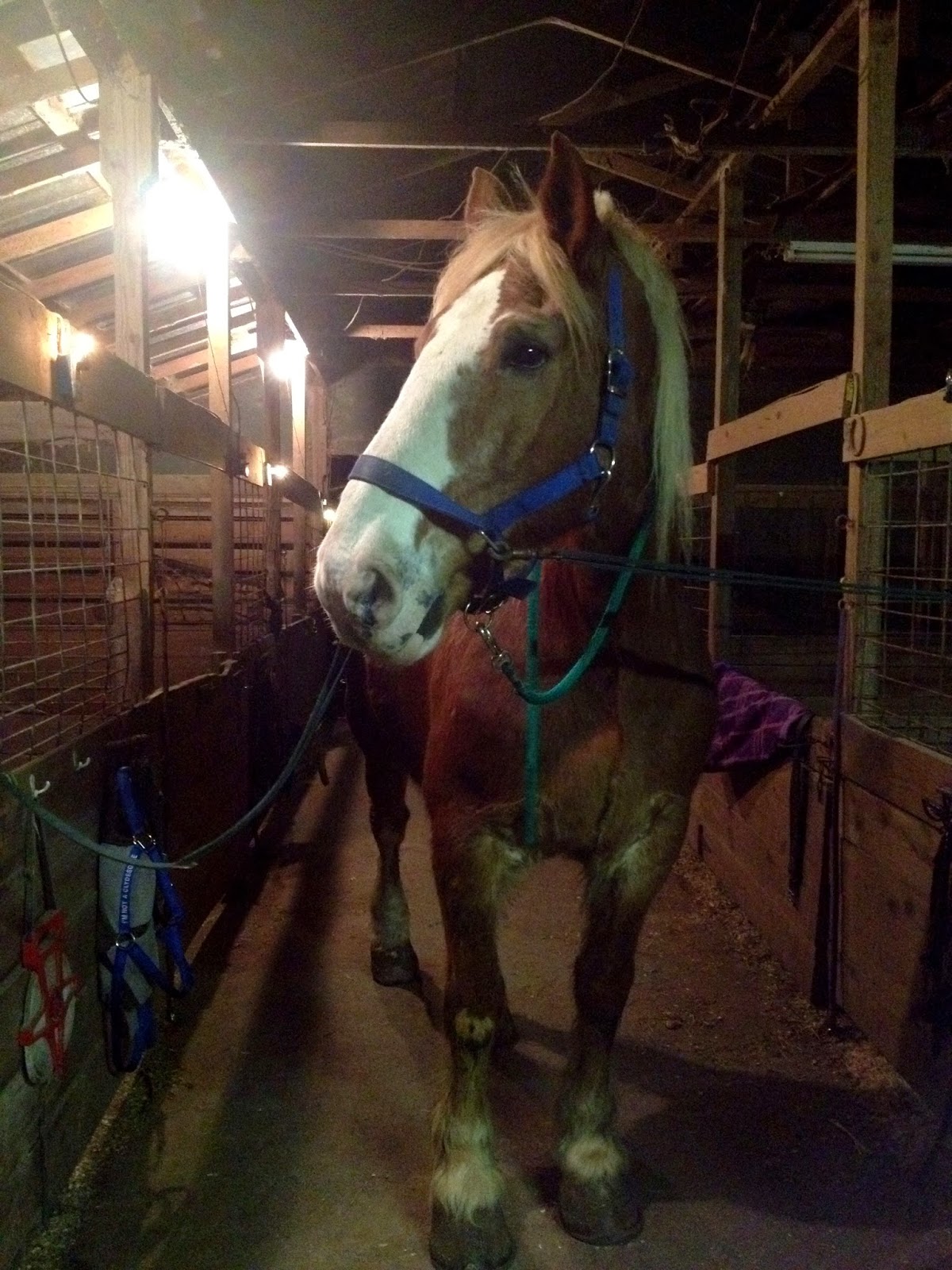 My handsome boy getting his bearings.

I put him in a small, sandy paddock behind all of the stalls.  I left a stall open so he could come in if he felt like it.  He got down and had a good roll and grunted the entire time.  He got a drink of water and then just walked around the paddock familiarizing himself.  The other horses started to whinny to him so he started looking for them.  He knew they were out there but he just couldn't see them yet.  He kept coming up to me as he was wandering the paddock.  He give me a nudge.  I know he remembers.  I had a couple mimosas and gave him two of his granola bars and just stood out there with him for a couple hours.  Then I finally managed to get a couple hours of sleep on a cot in the barn aisle.  That way I could wake up and just sit up and be able to see him out the stall door in the paddock.  No way was I leaving the barn yet! 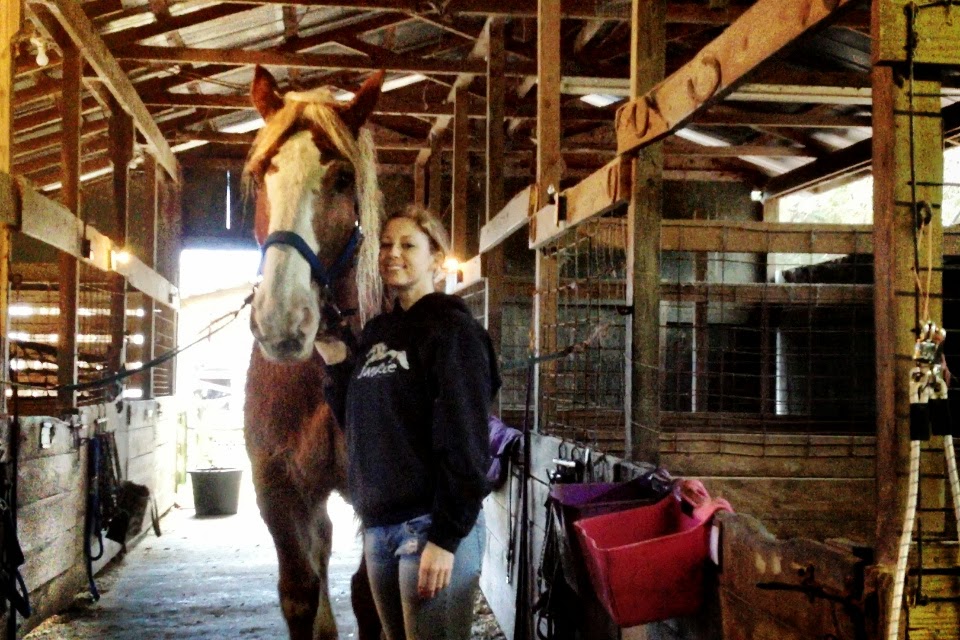 Finally light out, time to explore!

He kept watching the other horses, he wants to make friends.  I introduced him to a couple of the mares.  Klein and Moch were far out in their pasture at that time so I let him meet the girls that were hanging around the gate.  Only one squealed and Wes didn't even flinch. 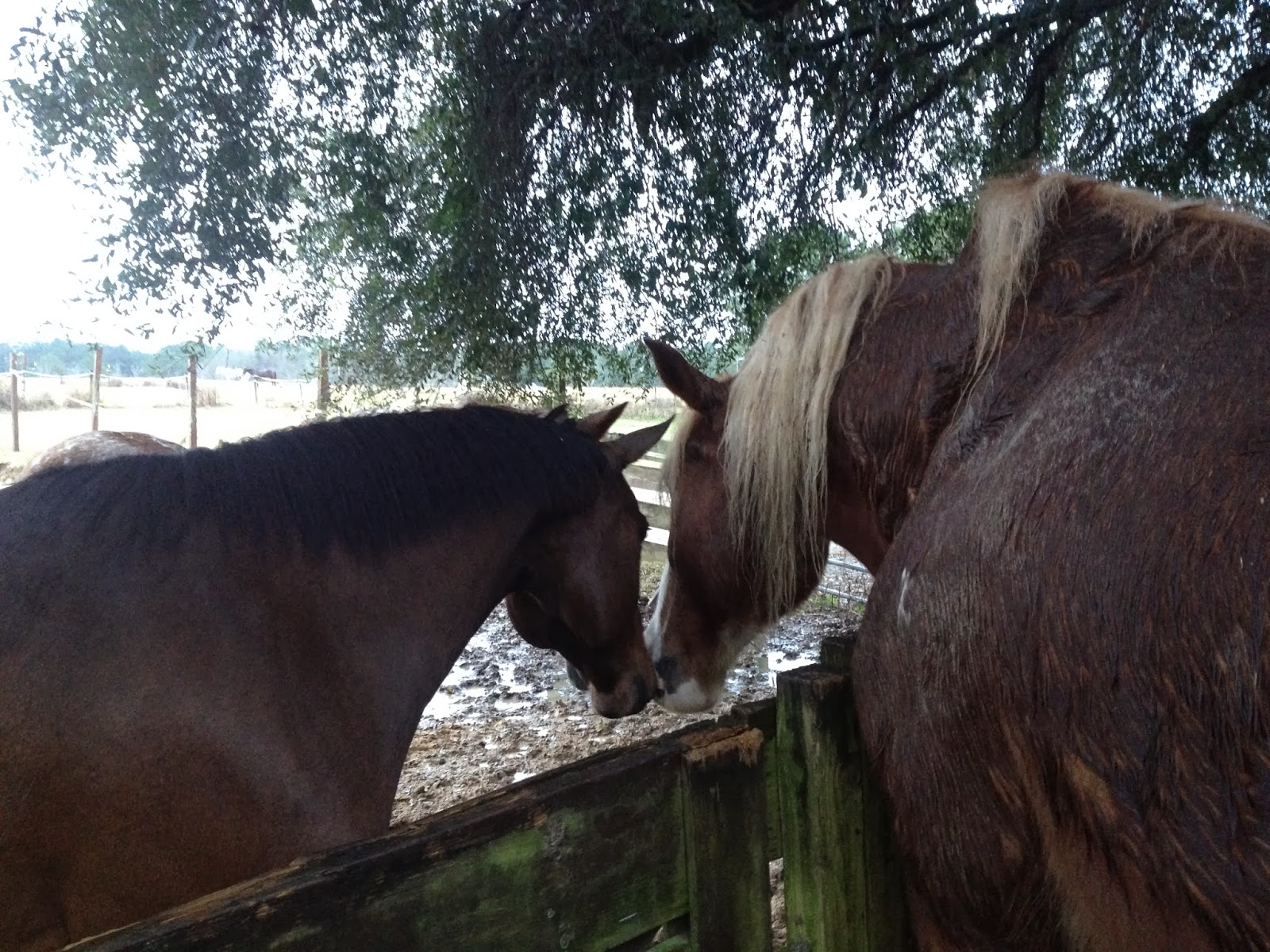 He's not sweaty, it rained that morning.


I put a chair out in the paddock and just sat out there and watched him for a while.  He still kept coming by to nudge me.  See below... 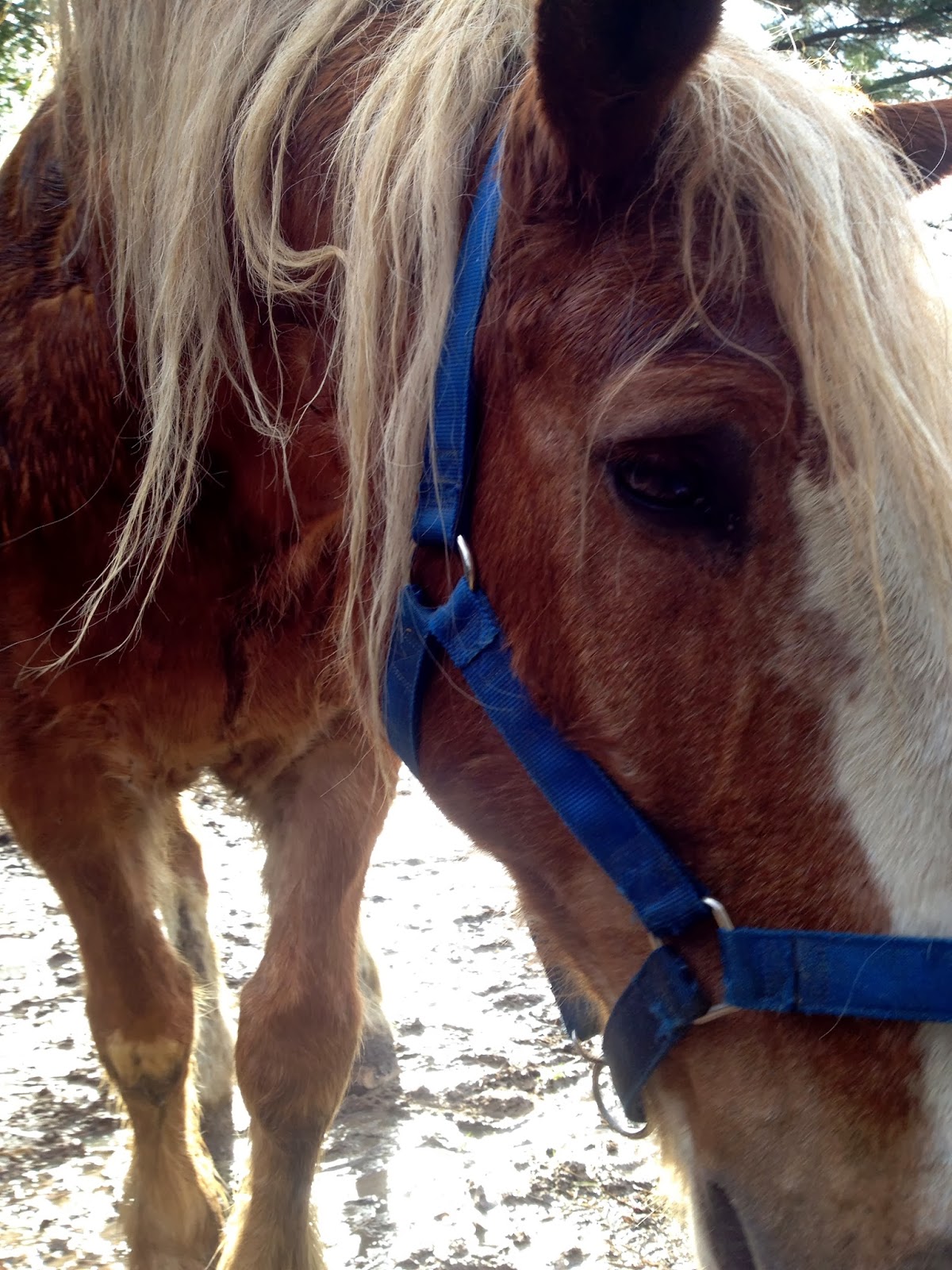 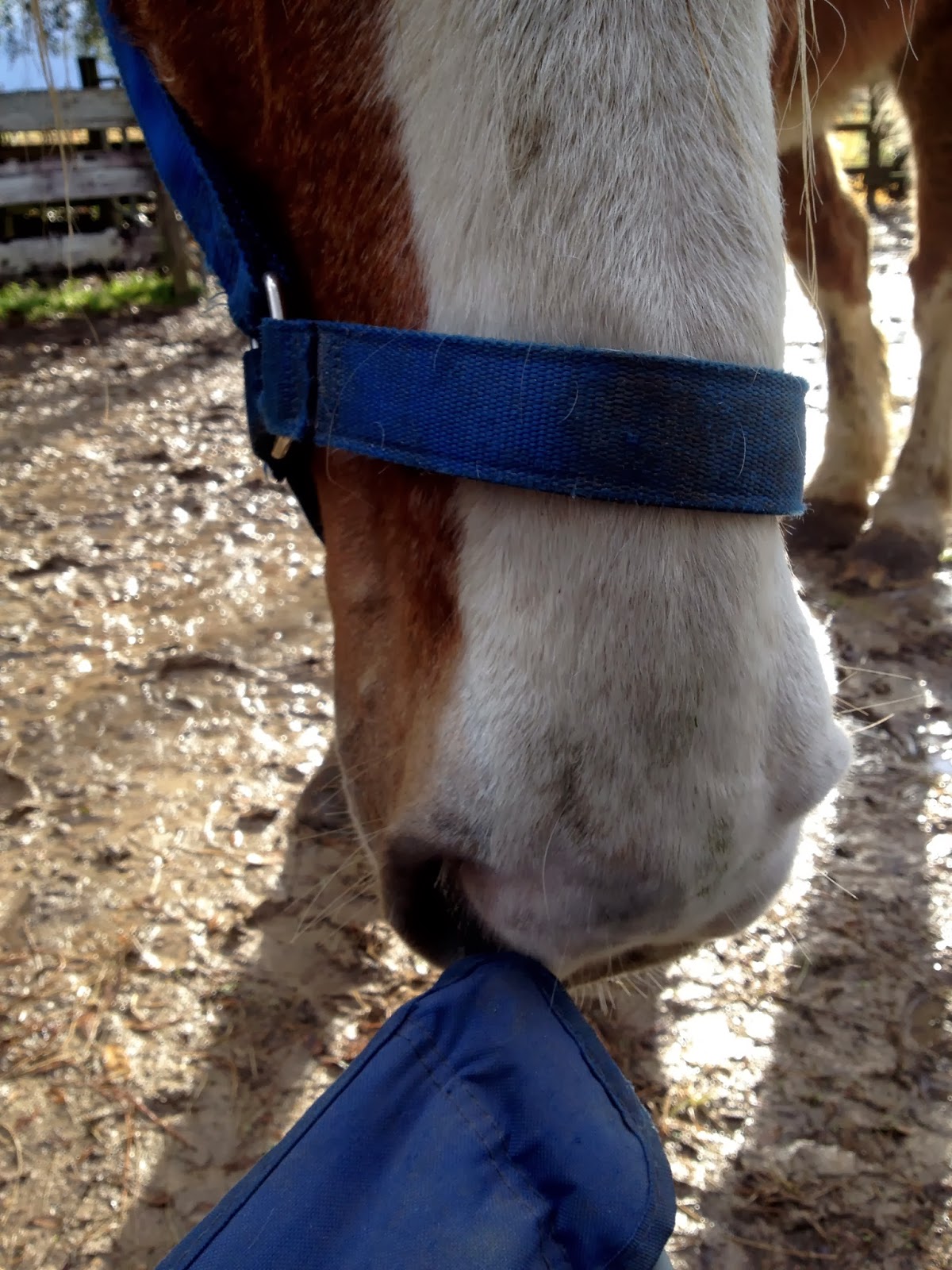 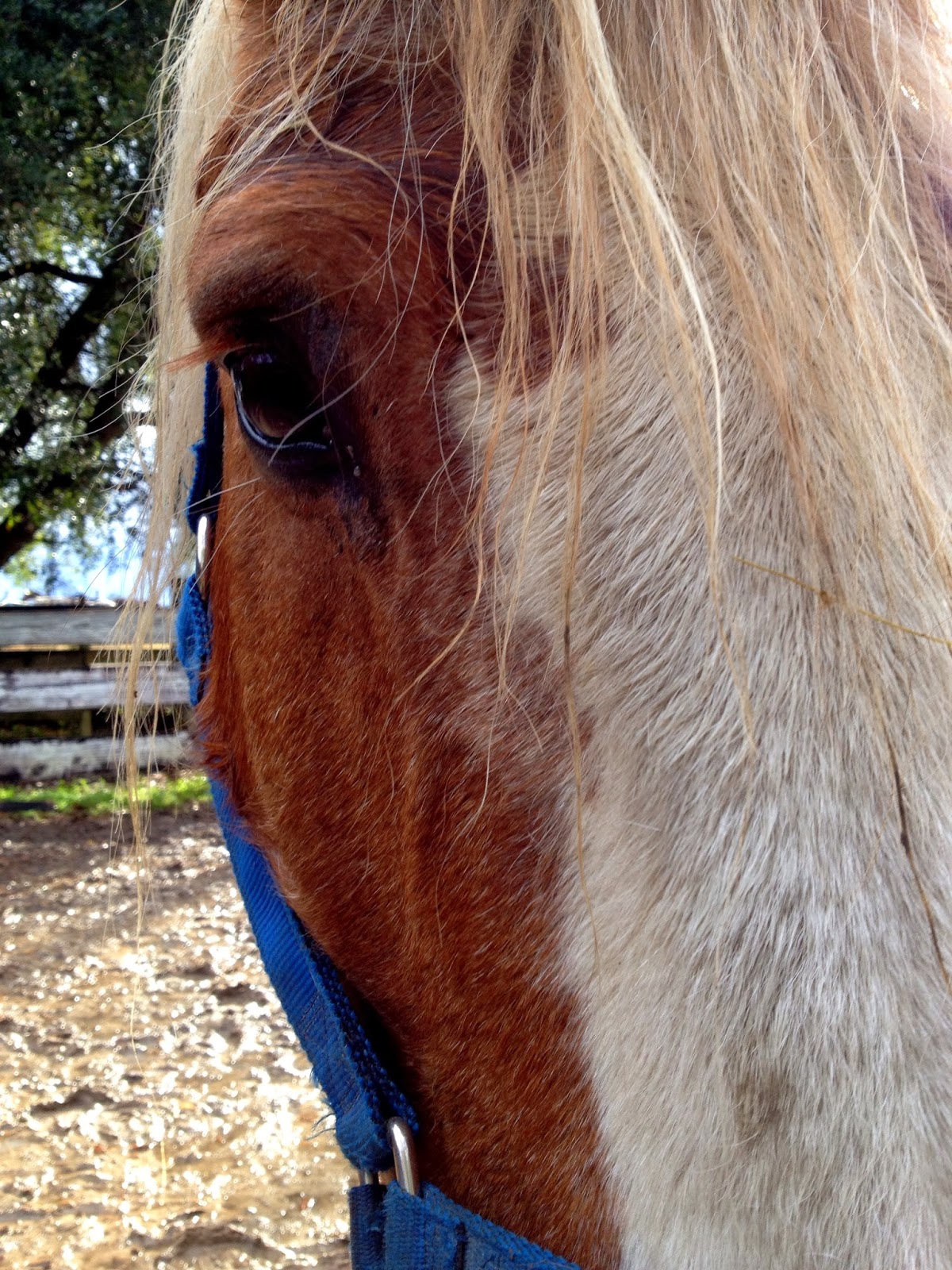 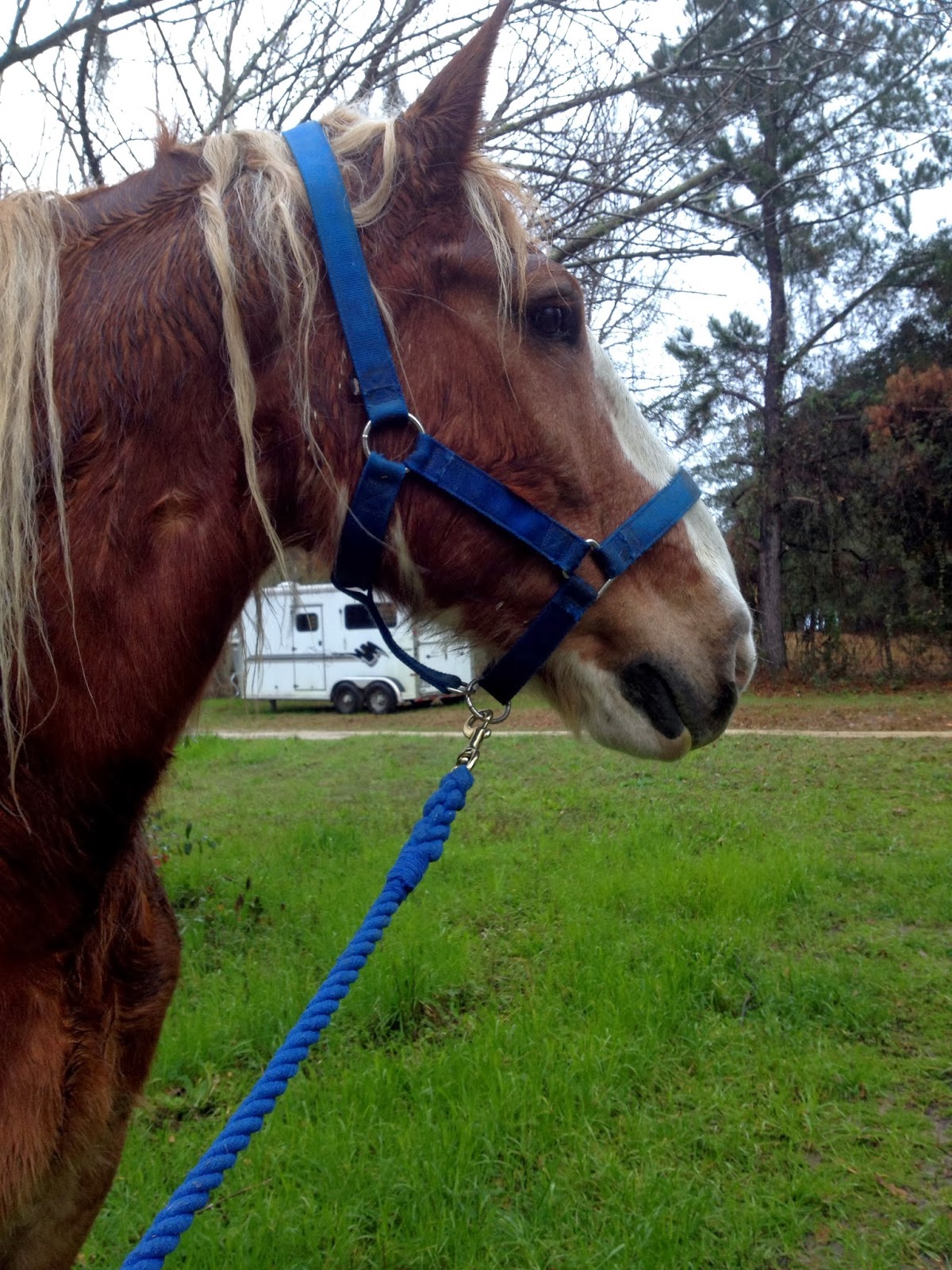 Going for a morning walk on the barn property.

Later in the morning I walked him around the perimeter of the pasture he'll be in so he could see where the fence is.  He was just checking out the sights. 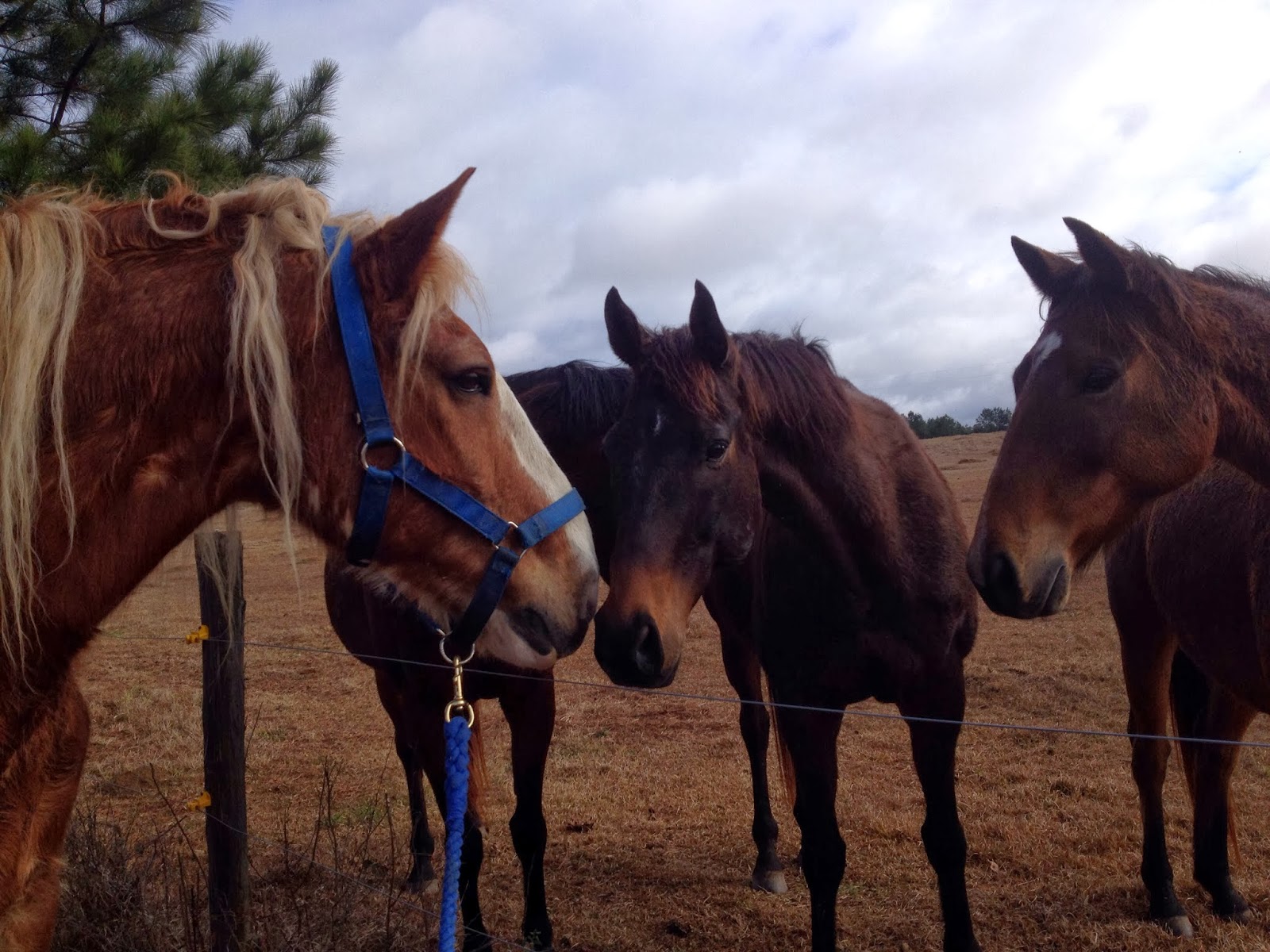 Meeting some of the other boys.

Once we made it around the perimeter I unclipped his lead rope and this was his reaction: 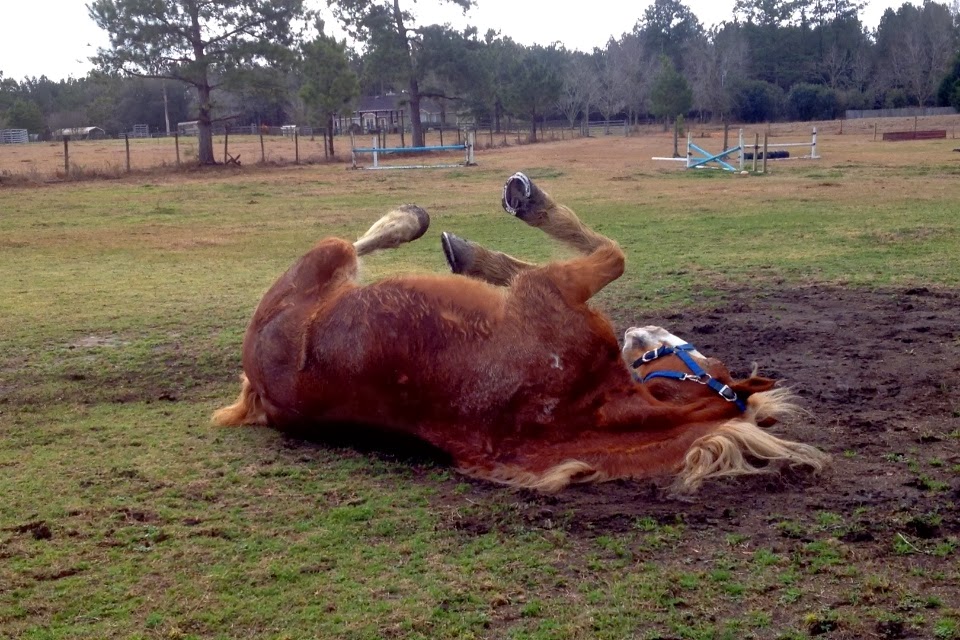 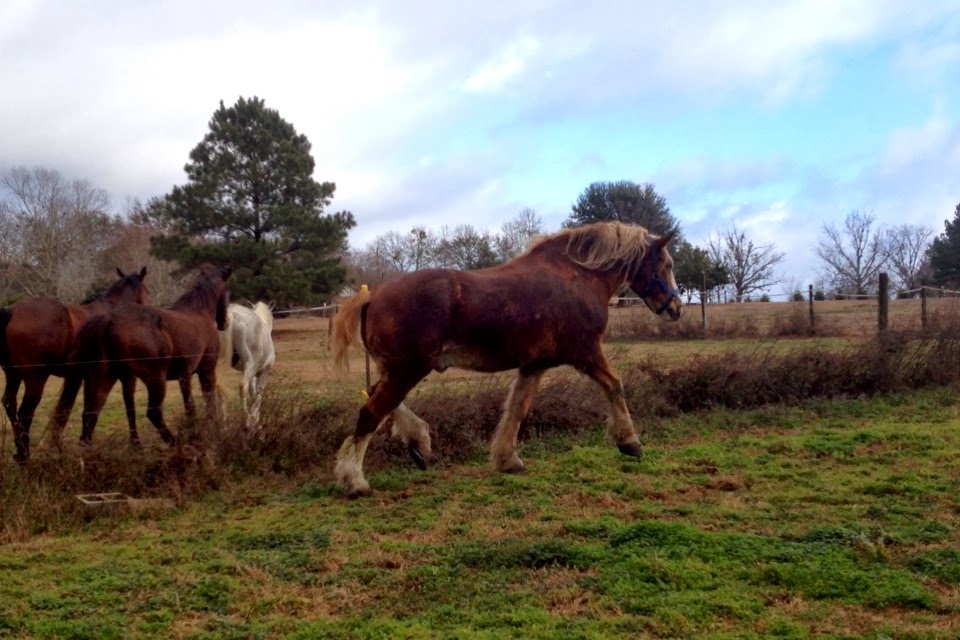 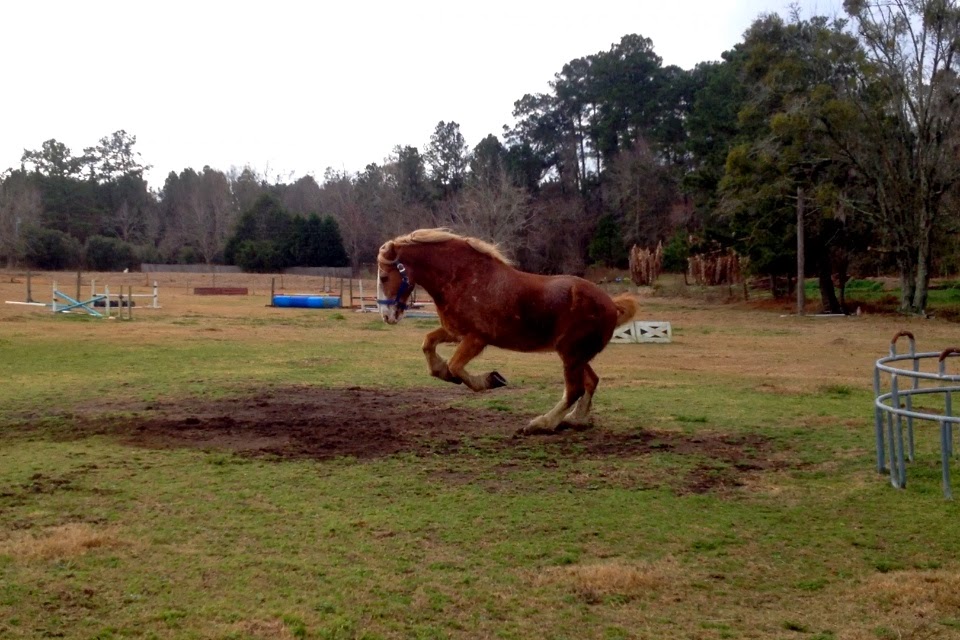 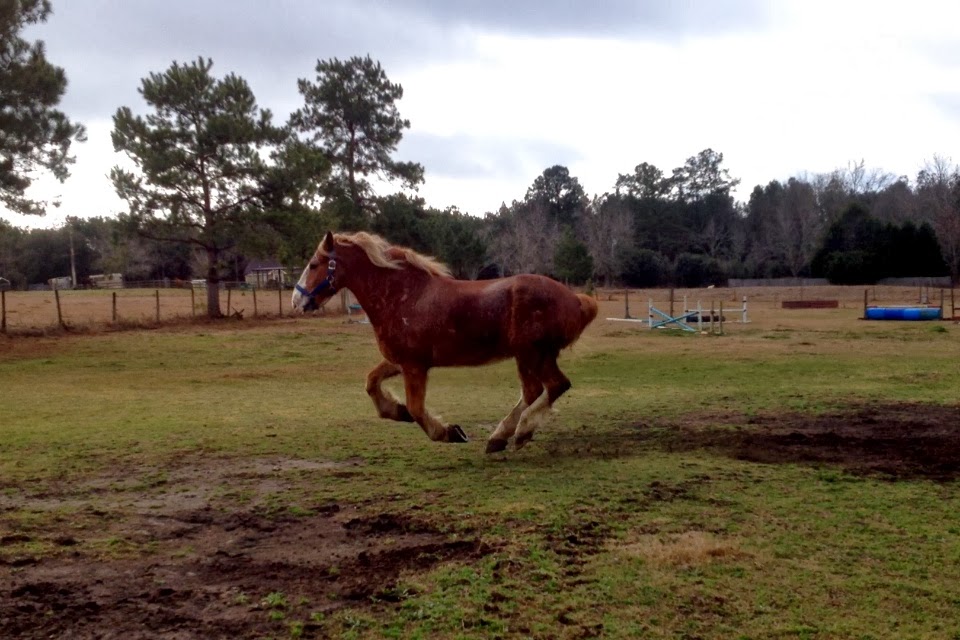 This makes me SO happy! 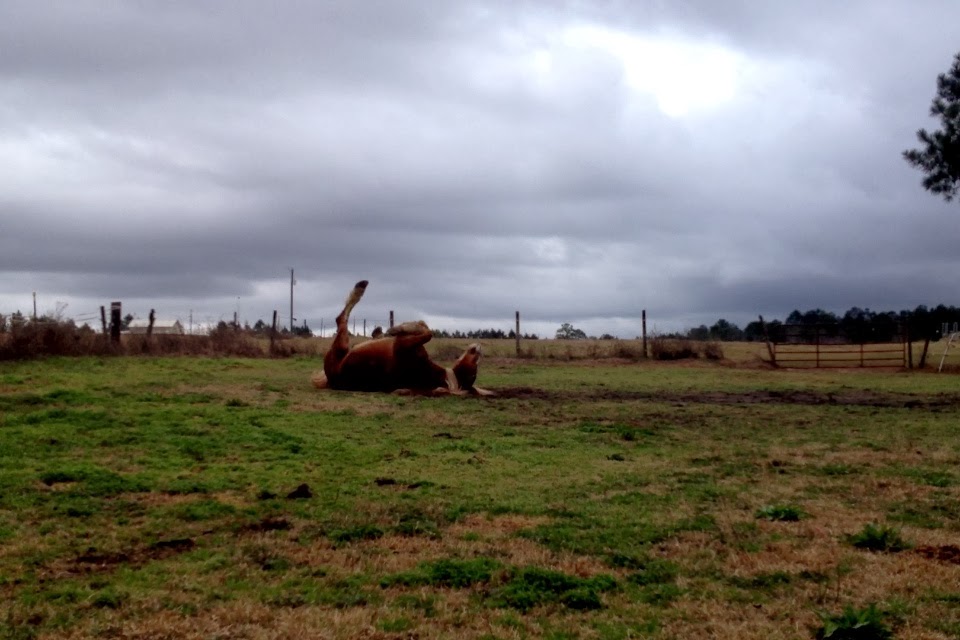 He's so cute.  He wants to make friends so bad.  When the other horses went in for breakfast he started to call for them.  So I decided after Klein was finished I'll put her out with him.  The pasture is a couple acres big so if they don't like each other it's not like they have to been anywhere near each other.

My prediction was wrong about what Klein and Moch would do.  Klein was SO rude!  She would pin her ears and lunge at him.  He just kept his ears pricked and completely ignored her.  I think he wants to be friends so bad that he was pretending she wasn't being so mean!  Another reason she might have been like that is she was out of her pasture.  So, maybe it would be different if I put Wes in with the girls where they normally are.  Klein just didn't want anything to do with him.  He tried to follow her around and she acted like she was so disgusted and offended he wanted to be friends.  Poor guy! 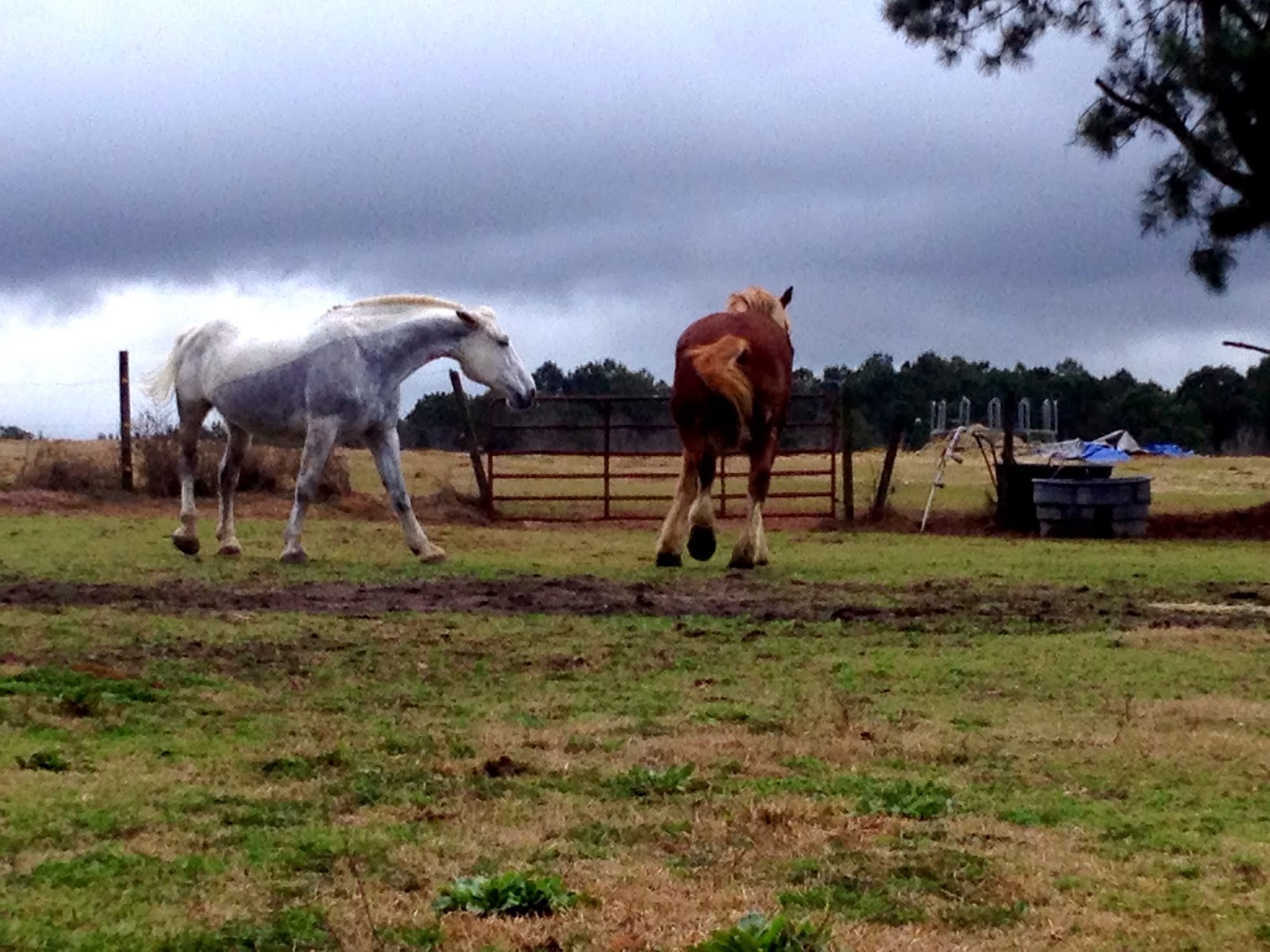 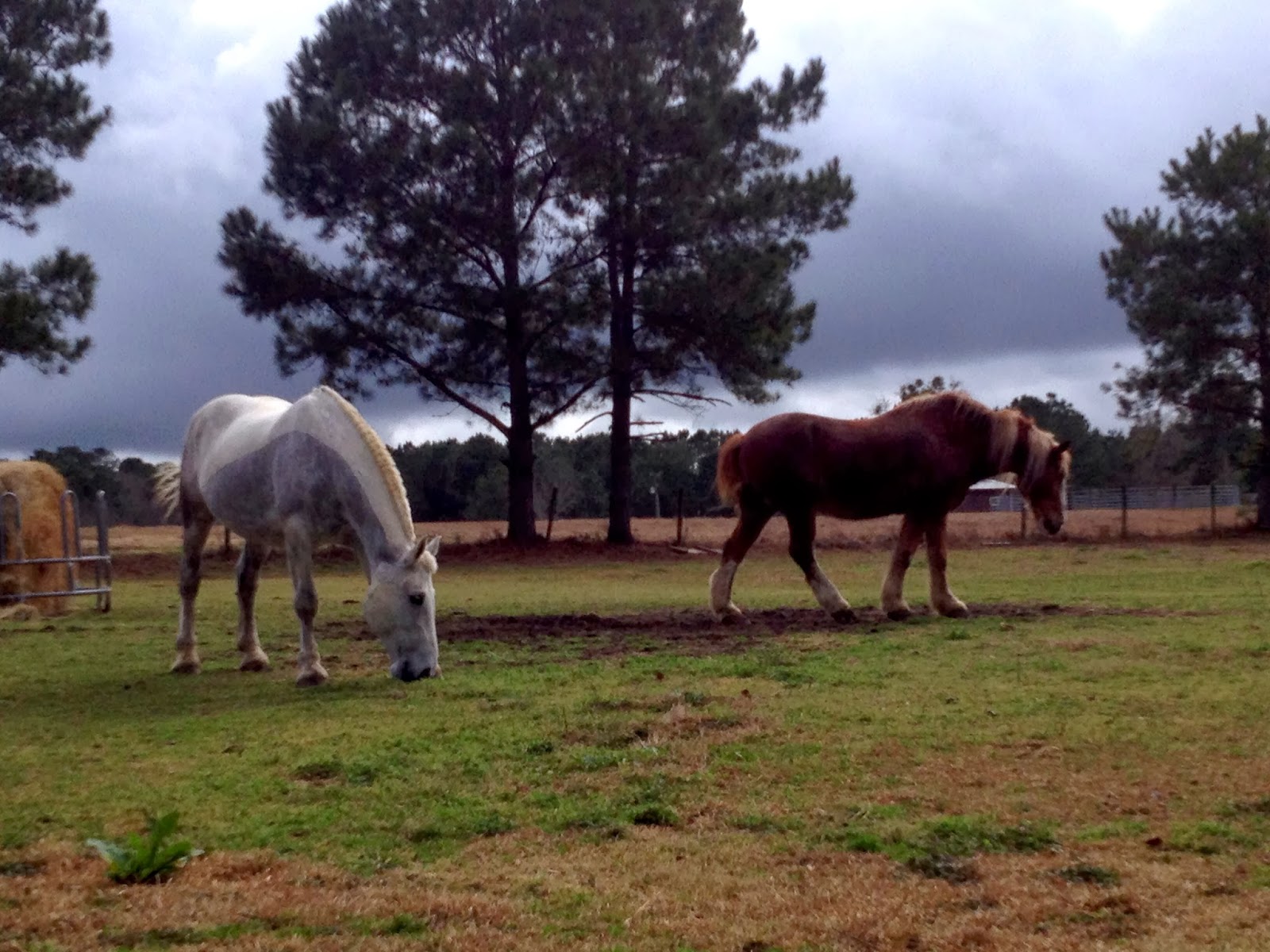 Wes pouting because Klein won't be his friend.

After a while I put Klein back in with the girls and brought Mochi over.  She was even more mean!!  He did the same thing, act like he didn't see any of her nasty faces.  Moch would pretty much run and do flying round house kicks at him.  She didn't kick him, just warning shots.  After a while though, I think she got bored with him not giving her any reaction and she started to just ignore him. 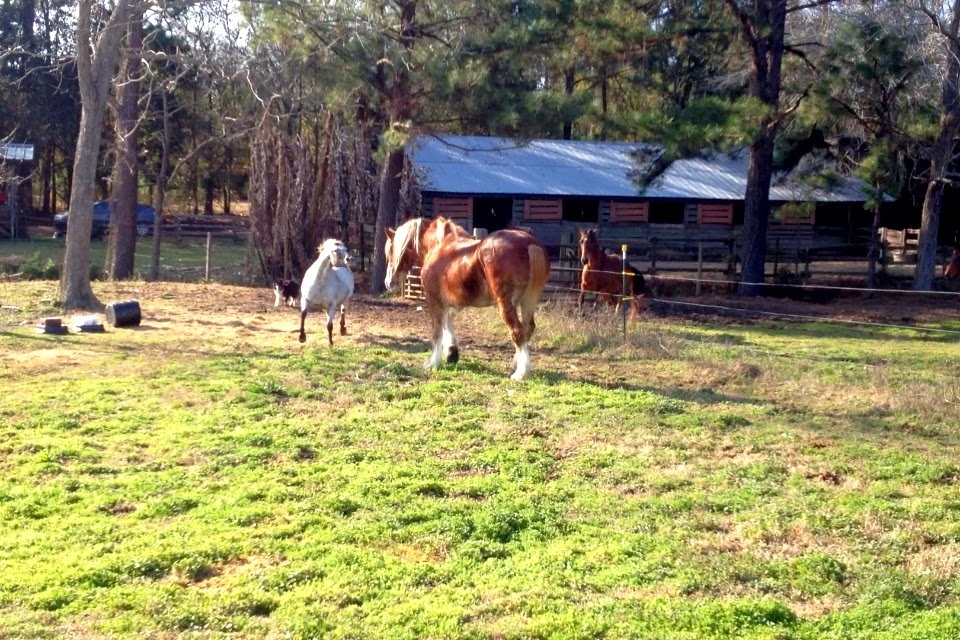 If looks could kill.  Wes is still just pretending like Moch isn't trying to fire off some 7.62 through her eyes.

As you can tell, Wes has a full winter coat.  It was 31 when he left Salt Lake and 74 at 2:30am in Georgia when he arrived.  Yesterday it got to 78.  Pretty warm for a big guy with a winter coat.  I gave him a bath.  I had been looking forward to that since I heard how filthy he was leaving Salt Lake.  I guess it was more like two baths yesterday because I had to do a couple rounds of washing a rinsing to get him clean.  He still needs one more bath but I got the first layer of filth off.  He loved his bath.  He stood like a statue.  He was SO quiet.  He didn't move a muscle.  His head dropped a little and I think he was about to fall asleep. 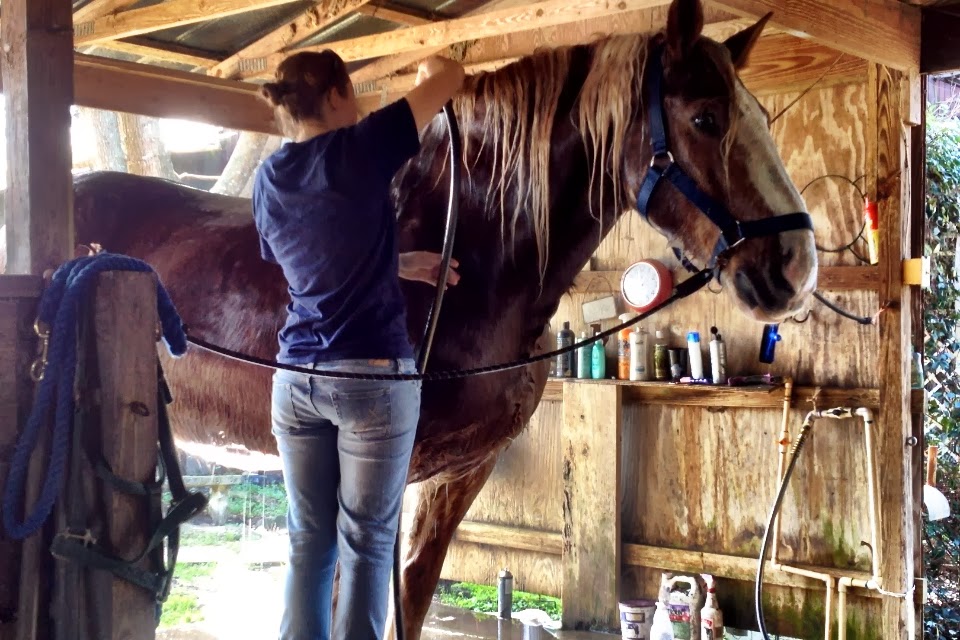 It was such a beautiful afternoon.  There was a really nice breeze so I decided to take Wes for a walk in the sun hoping the breeze would help dry his long coat. 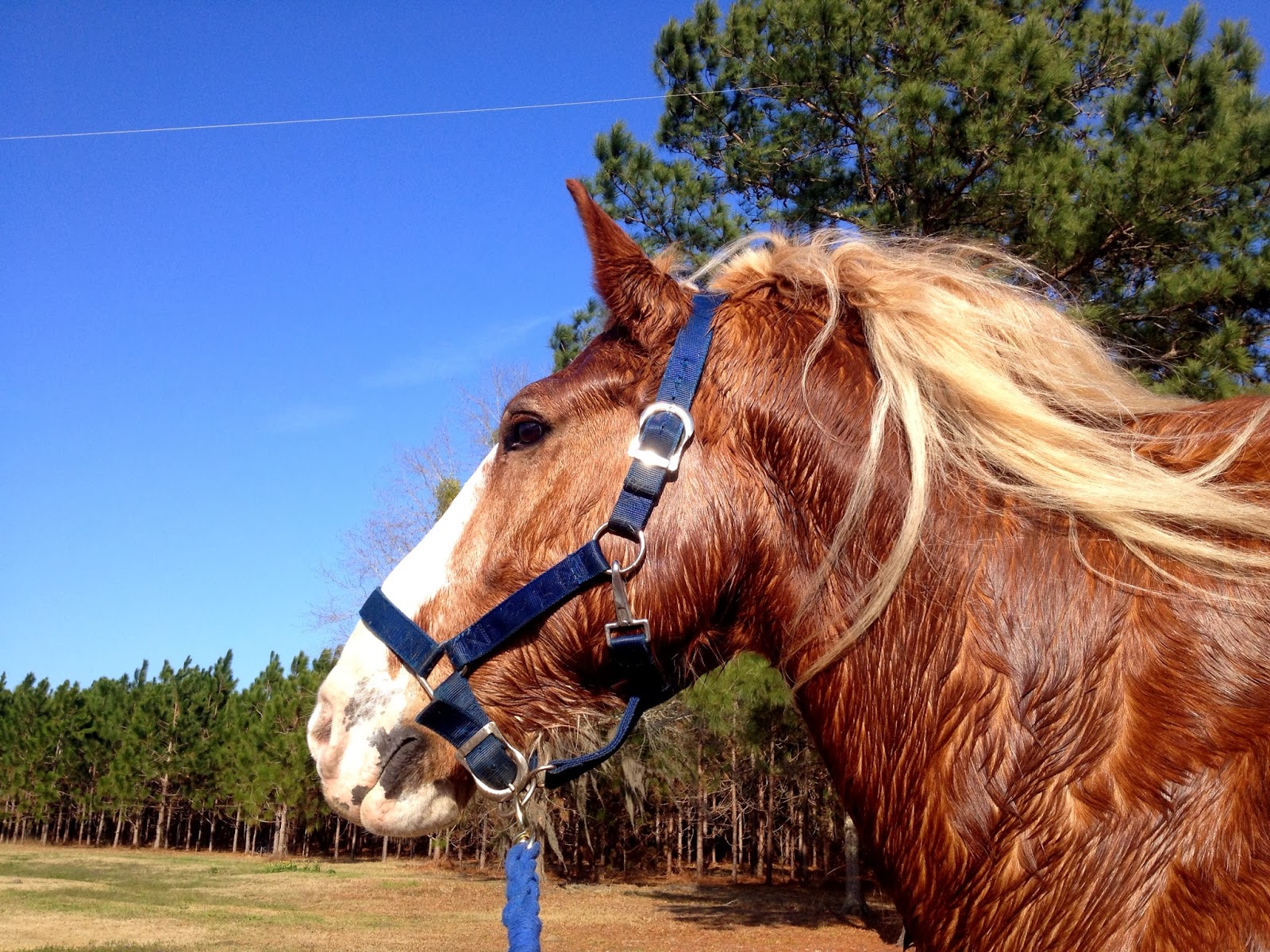 My handsome boy checking out the sights on our walk.

I'm going to clip him in the next couple days.  That way he'll be much more comfortable in the weather here.  Our lows here right now are higher than the highs for Salt Lake lately.  So this will be an adjustment for him.

I'm not quite sure what I want to do with that mane yet.  Both Smith and Wesson showed up in Salt Lake with some pretty awesome war horse mohawks.  So, we might go for the mohawk again.  You can see he has a fallen crest, it adds character.  It has been like that since the day I met him.  I know he is registered and was shown a lot in the lead on a hitch in his younger days in Canada.  He was born and bred at Creekside Belgians, he has the Tom Lane brand.   He was shown on the Creekside hitch and with another farm in Manitoba, Canada.  So I wonder if he wasn't gelded late and that's why his crest has fallen.  He's never had any known health issues and his crest has never changed.

When when we left for our walk after his bath the whole farm started whinnying for Wes.  He answered them back.  When we got back from our walk guess who was standing at the corner of her pasture watching for us?  Klein.  I'm sure she was looking for me but I hope that her seeing me with Wes helps her understand he is one of us now.  He's part of the family.  I'm sure she'll get over herself.  Like I said, I think they'd be a little nicer if I put him in THEIR pasture with them.  I'll try it.

I took my chair out in his pasture and just sat there to hang out with him.  I love watching him just enjoy life and be a horse.  We put a new round bale out for him and he was tearing into it.  He has yet to try and take a bite of anything in the pasture.  He's been on free choice hay 24/7 for years so I guess the thought of grazing hasn't crossed his mind yet.  Obviously there isn't much to graze on here right now, hence the round bale.  If there was he wouldn't be out all day on it for obvious reasons.

Every now and then he would stop eating and just stand in the sun, or walk over to the fence and watch the other horses, or come to me where I was sitting to nudge me some more.  One time when I walked out to him just to stand with him I put my forehead to his and we stood there like that for a min.  He gave me a good nuzzle too like he wanted to fit his head in my arms.  I really feel like he does remember me.  I wonder if that is why he kept coming to me, to see if it's really me or to make sure I'm still there.  I kept telling him he is home now.  I told him he has a dad too, but his dad is in Afghanistan fighting the Taliban, so he has to wait a couple months for him to come home.

He rolled five times yesterday.  I got them all on video except the first one that was in the dark when we got to the barn that morning. 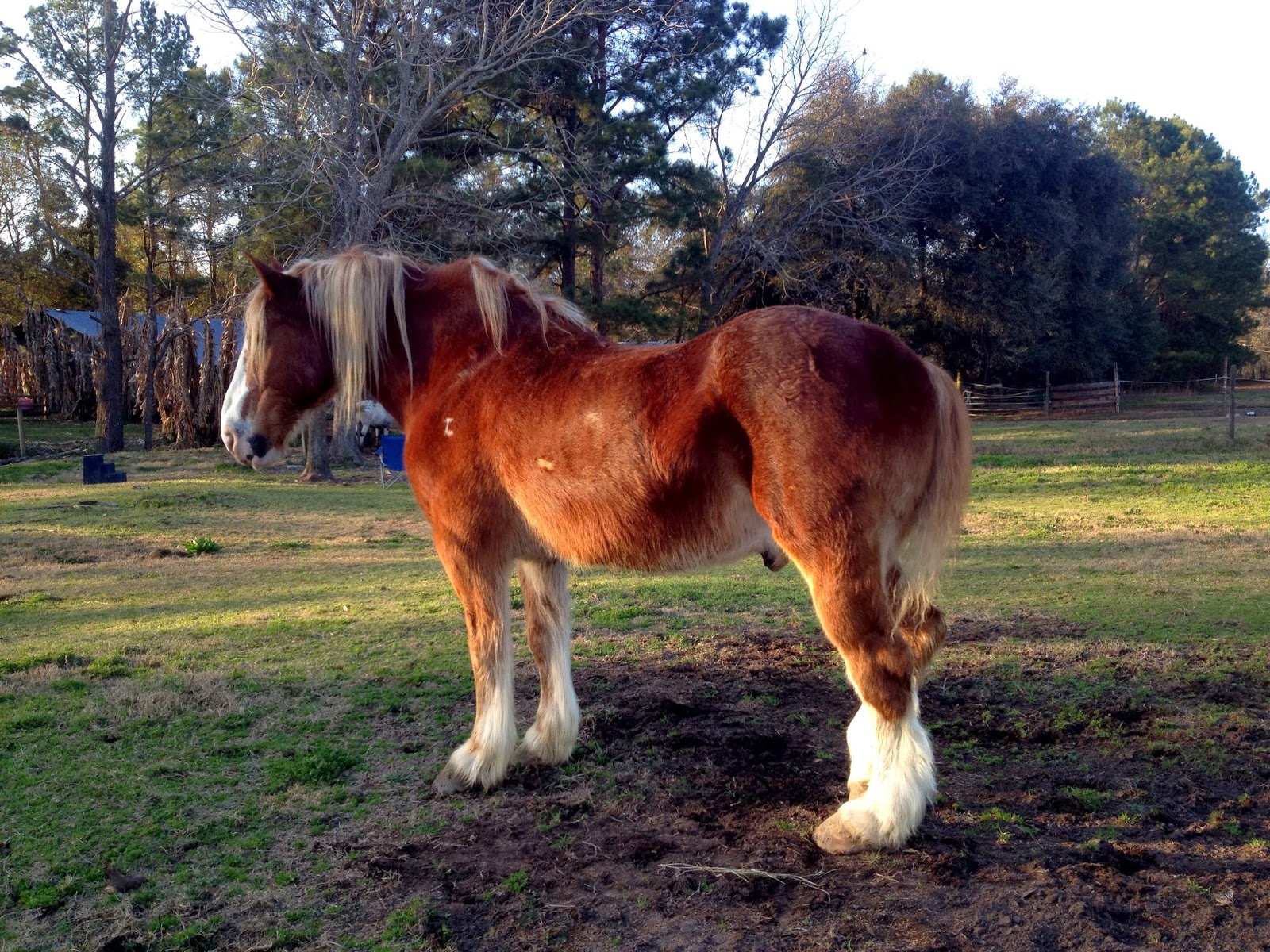 Looking much better after a bath! 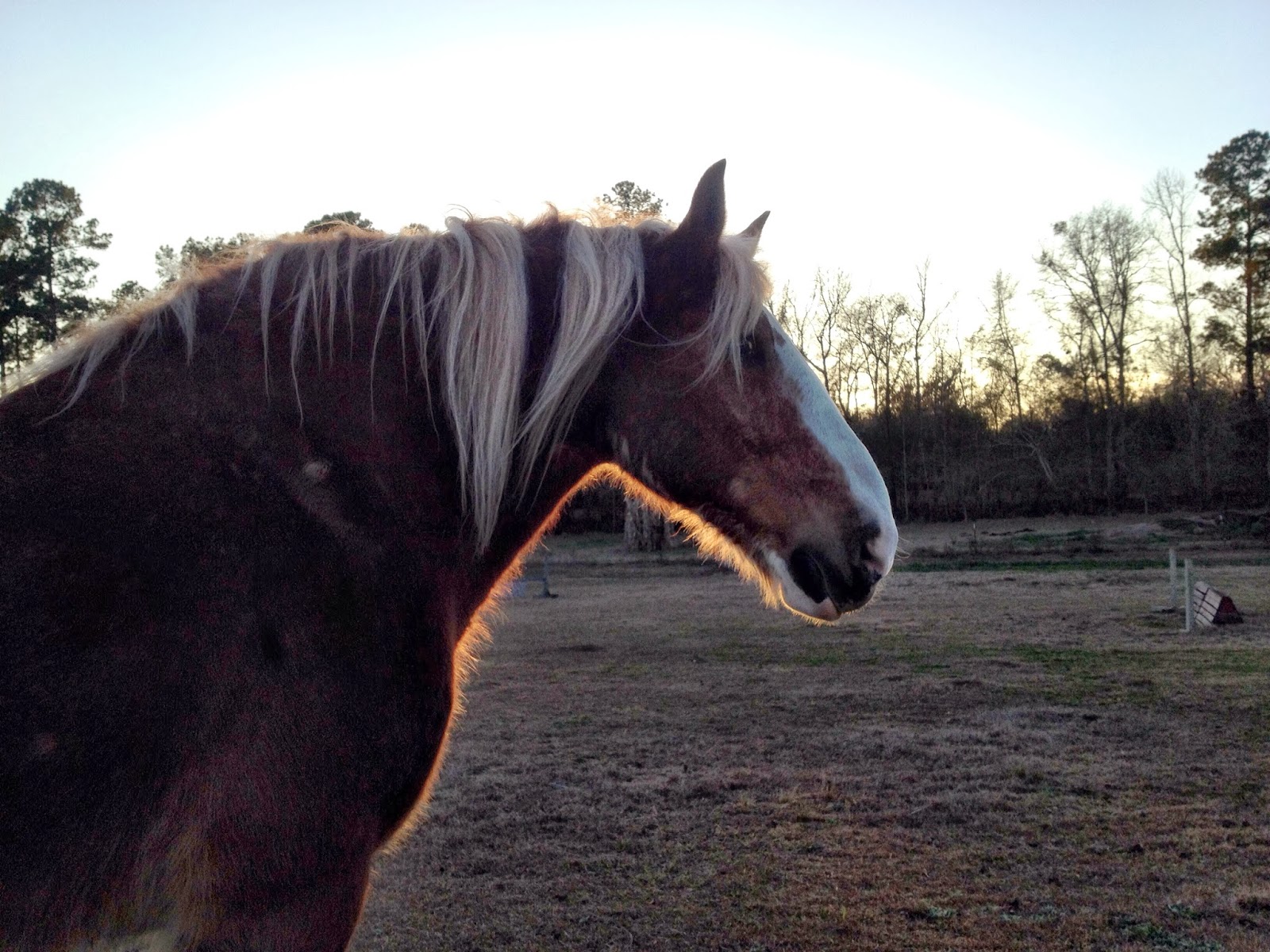 Enjoying a beautiful evening together. 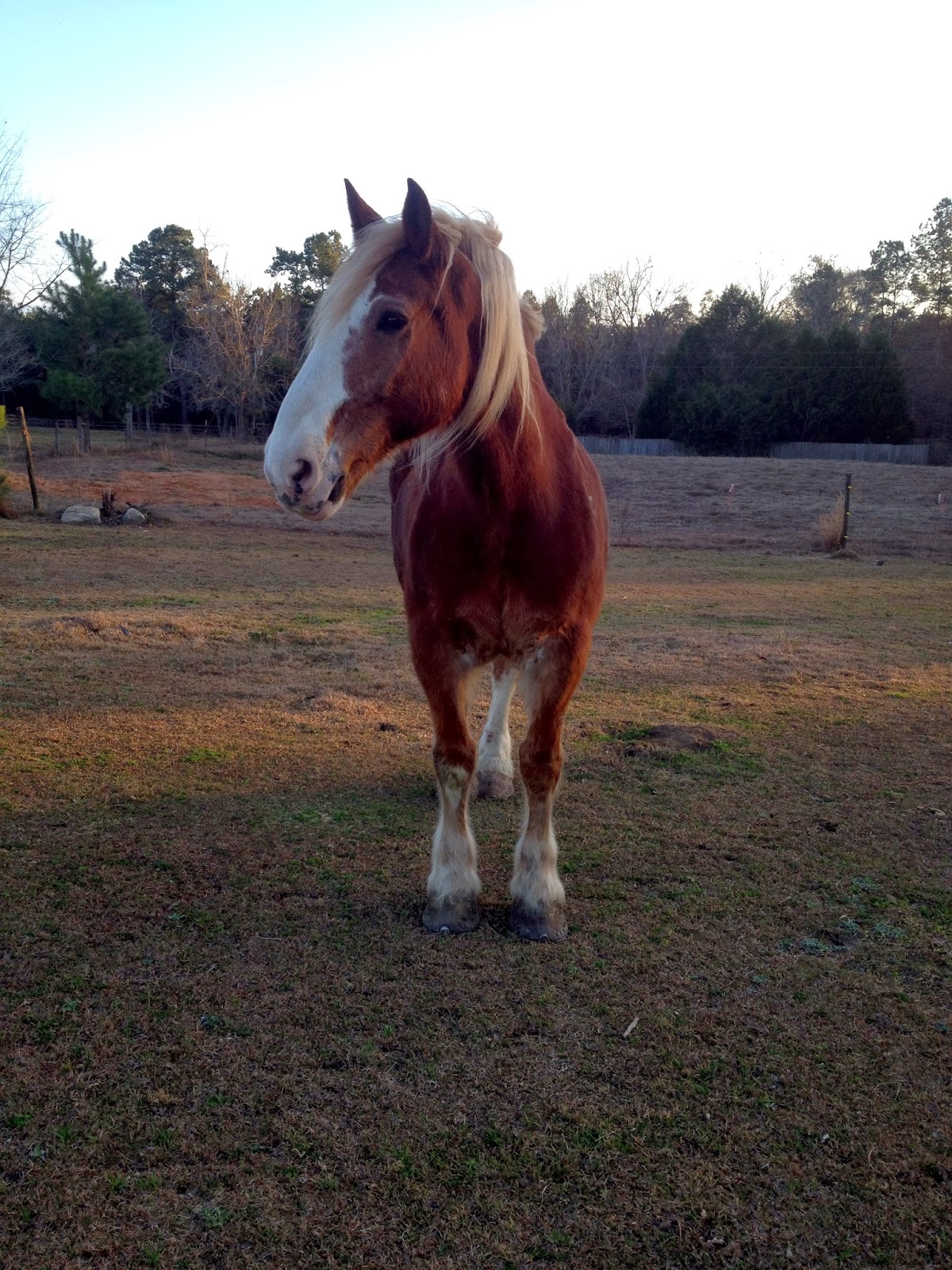 Yes, he is every bit as sweet as he looks.

Friday my farrier is coming out and we will pull his shoes.  So I'll be documenting his transition to barefoot on here as well.  You might have noticed he's a bit long right now.  That's because I asked the Salt Lake barn to leave his shoes on.  I didn't want to change a thing before his cross country road trip.  There was no need to do a full reset a week before he came home and then pull the shoes a few days later.

So our first day back together was pretty much perfect.  I am still in a little bit of shock that he is really home and I can see him every day.
Posted by The Jumping Percheron at 10:12 AM