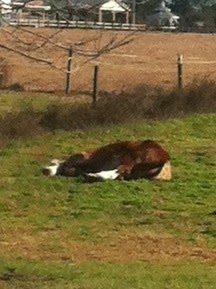 Wes laid out in the sun the second morning home.

Wes could not be settling in any better.  You would think he has been here his whole life.   He's been eating a drinking great.  I really don't think he even lost one ounce during his trip home.  Actually, I don't think he's lost one ounce in the last eight years.  He seriously looks exactly the same as the last time I saw him years ago.  The only difference I see is a couple grey hairs above his eyes. 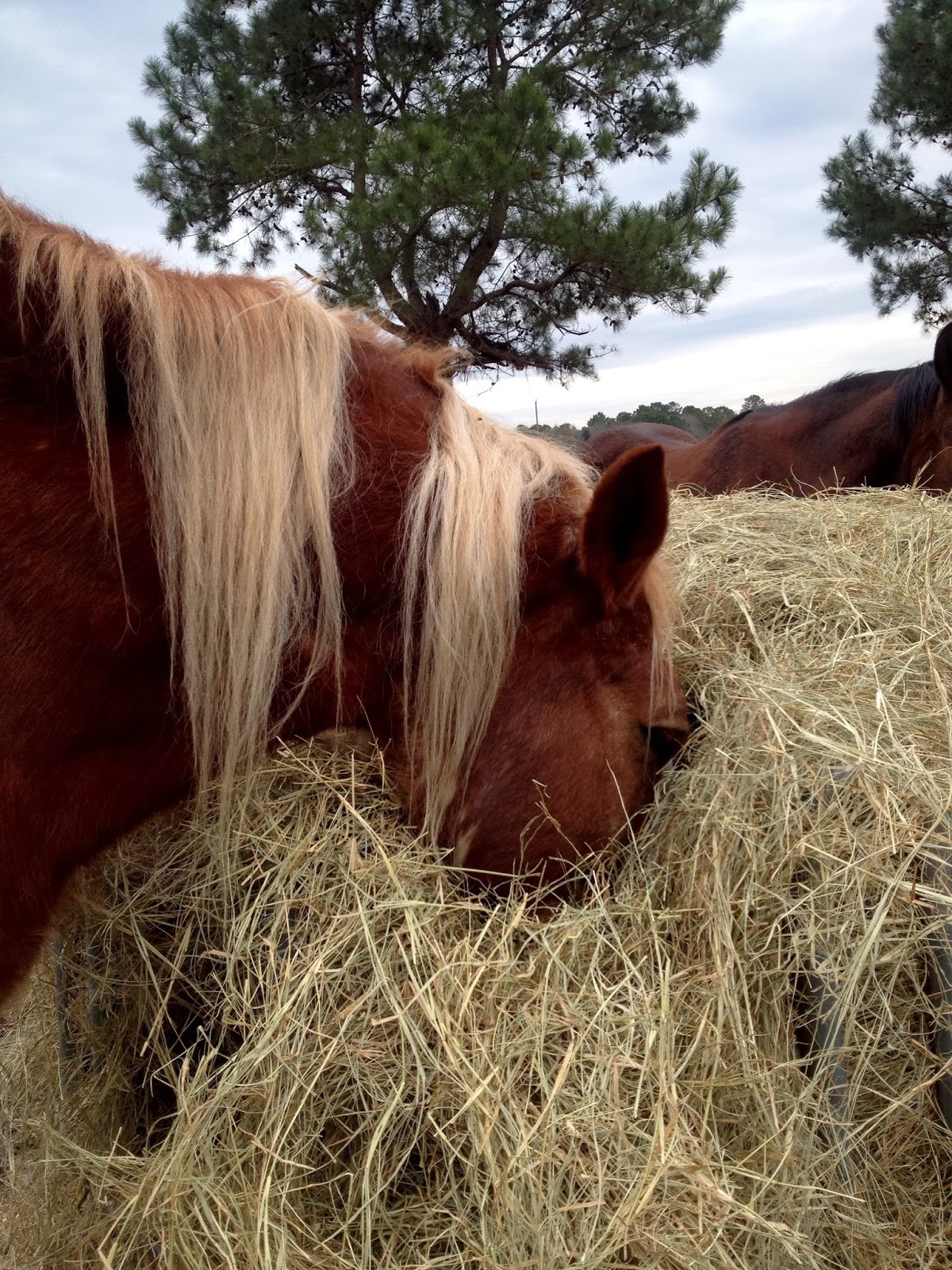 He LOVES his Georgia hay.

The second night he was here we had a storm come in and the temperature dropped into the low 50's with rain most of the night.  I started to put all the ponies in that evening right as the rain started to lightly fall.  Wes saw everybody heading in and he started making his way to the gate to come in too.  He is quiet as can be in the barn.  The stalls here are big enough for a Wes, so he was very comfortable in the barn for the night.  Normally, aside from storms, the horses only come in for a small amount of breakfast grain then they go right back out.  They do not stay in the barn.  Anyway, Wes' stall was nice and fluffy with fresh shavings and he laid down and got some good sleep. 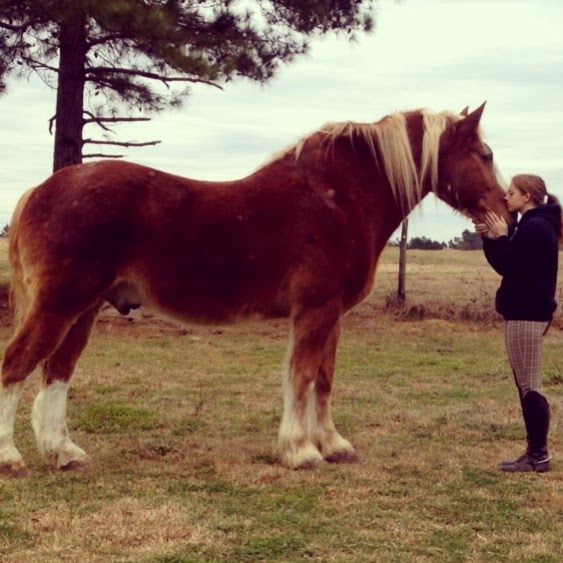 Hanging out before the storm came in. 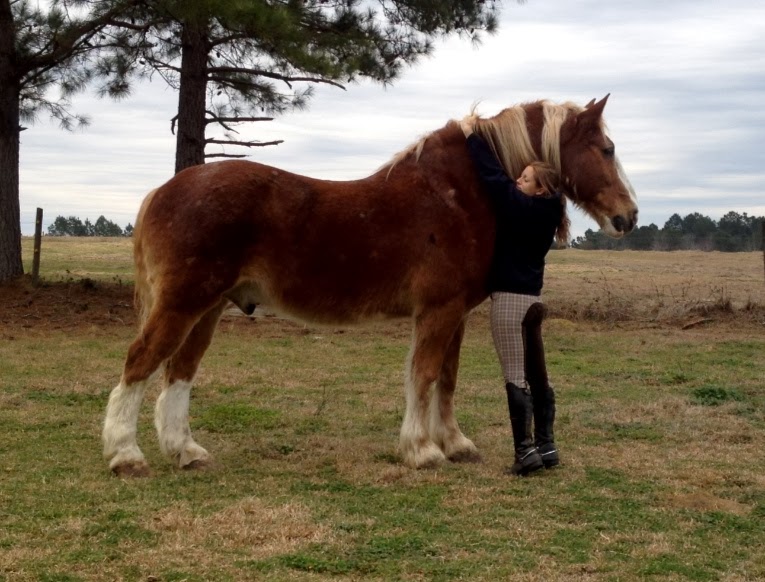 I have to stand on my tippy toes to get my arms around his neck! 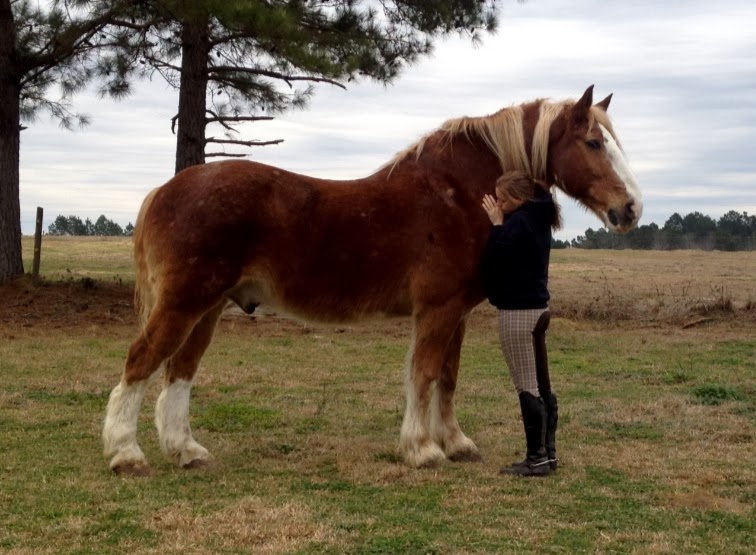 The next day he met our awesome DAEP and got his shoes off and had his first barefoot trim.  He has nice feet, a great base to start with. 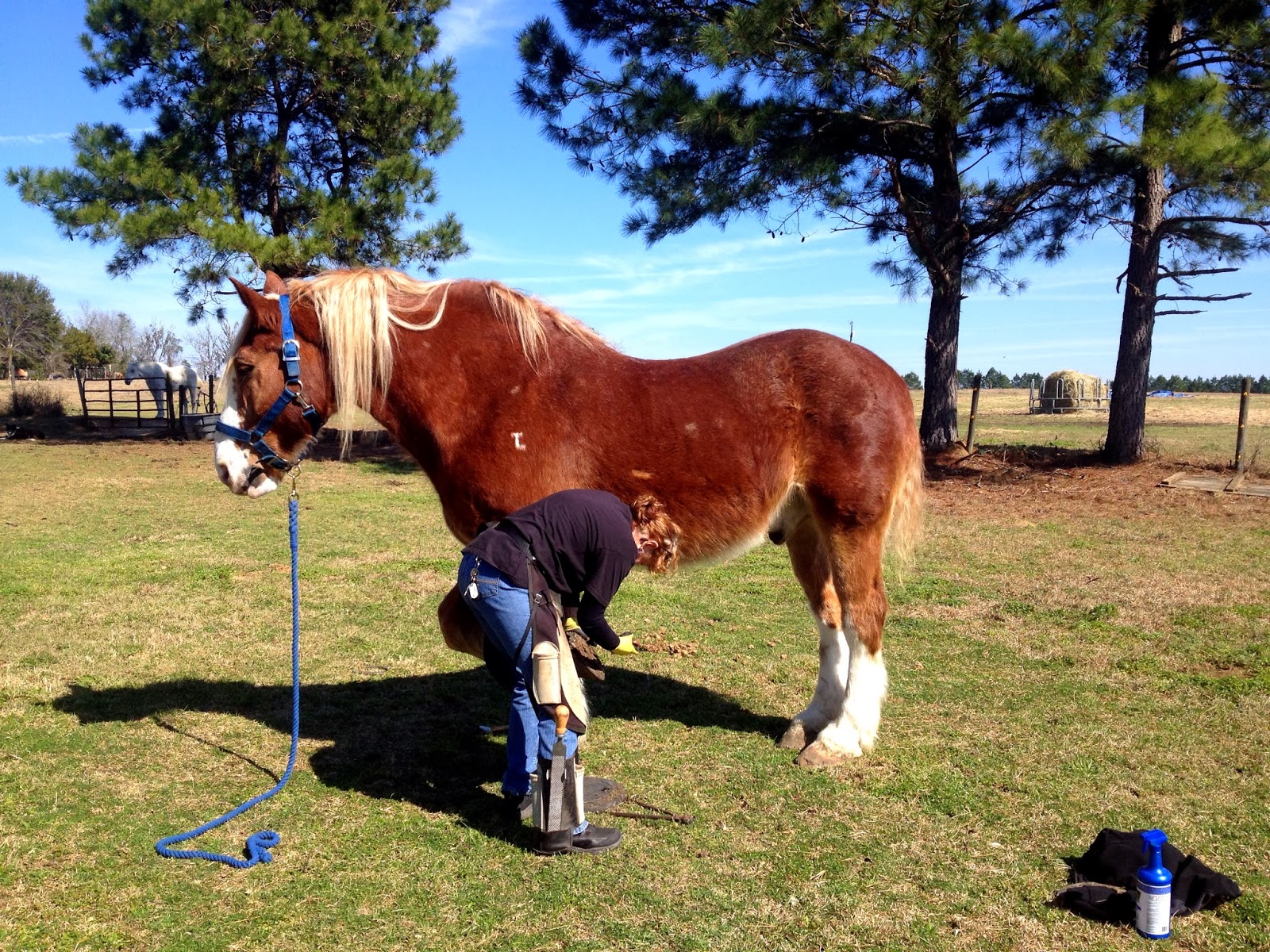 Wes being a perfect gentleman while Cindy pulls his shoes.

Cindy played it safe, because she is smart, one of the many reasons we love her.  She took off what she could and left what she had to.  It will take a few trims to get Wes all squared away, but that is exactly what I expected.  This is years and years and years of being trimmed and shod one way, so it won't take a trim or two to change his feet. 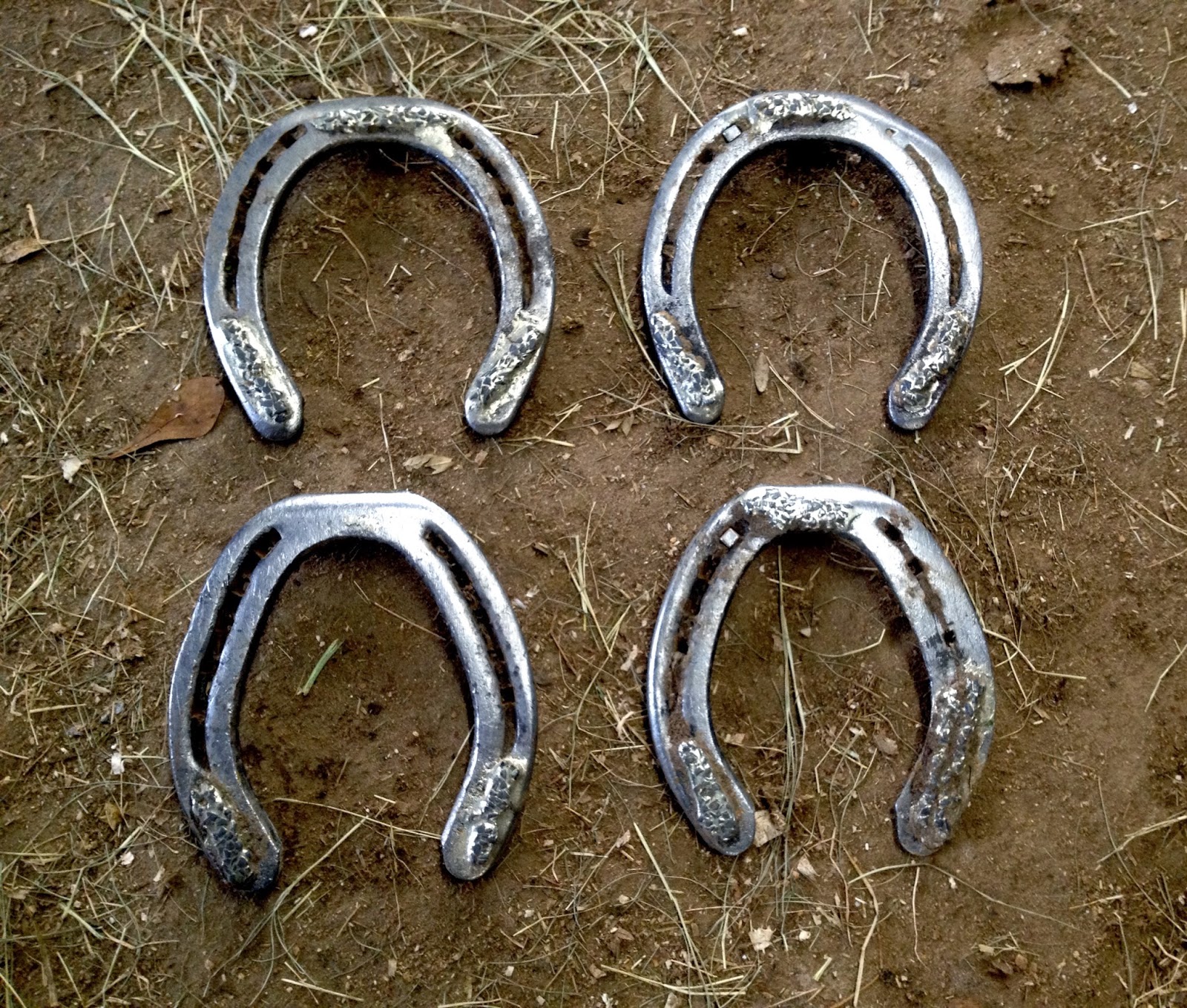 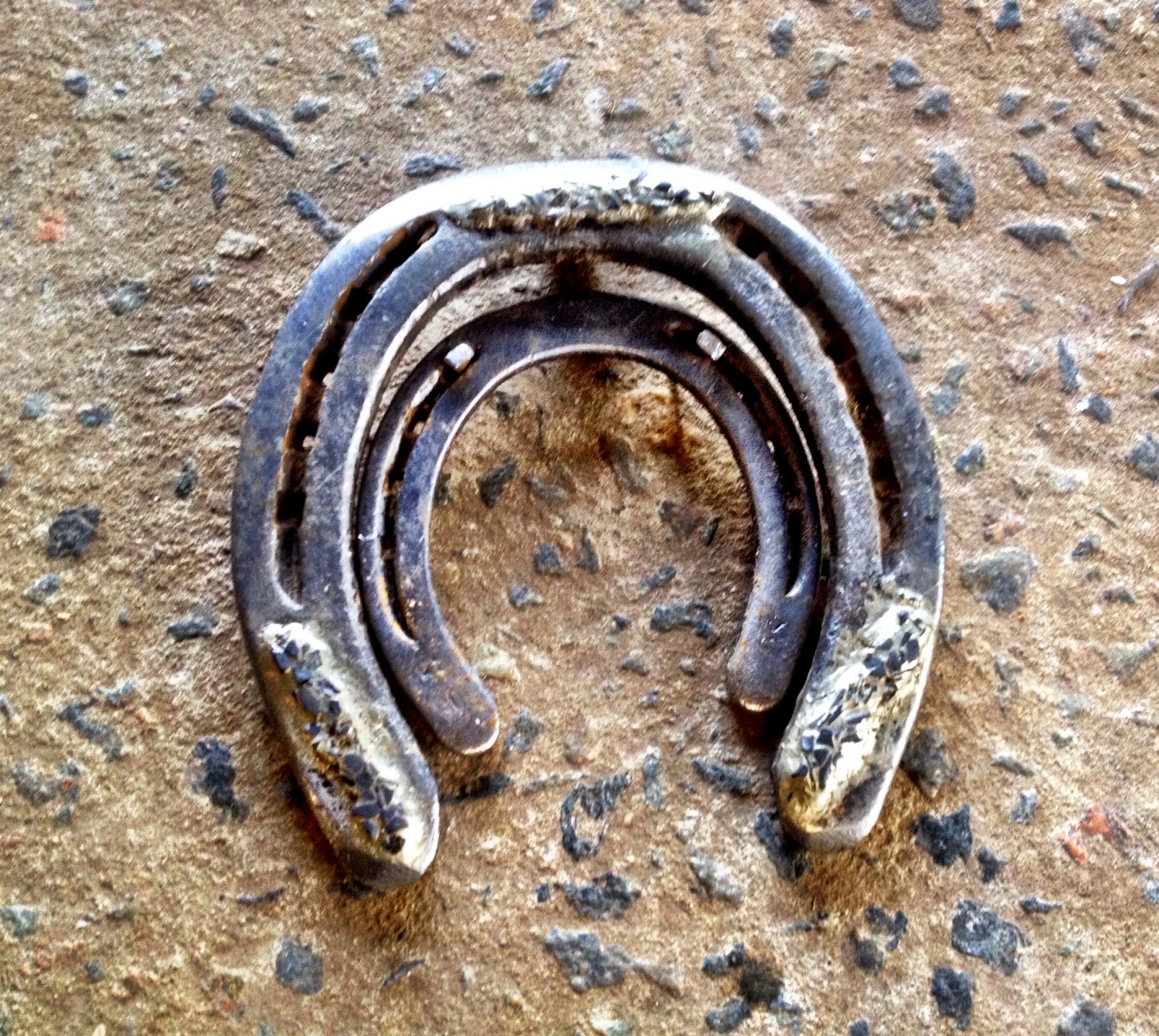 Here are some before and after pictures.  Now keep in mind he was long when he arrived because I did not want to have his shoes pulled before he traveled, and to reset shoes for a week's worth of wear wasn't really worth it.  So, he would have been trimmed and reset a couple weeks ago if he stayed on his normal schedule.  The Salt Lake barn doesn't let their horses go, they are all on a regular farrier schedule. 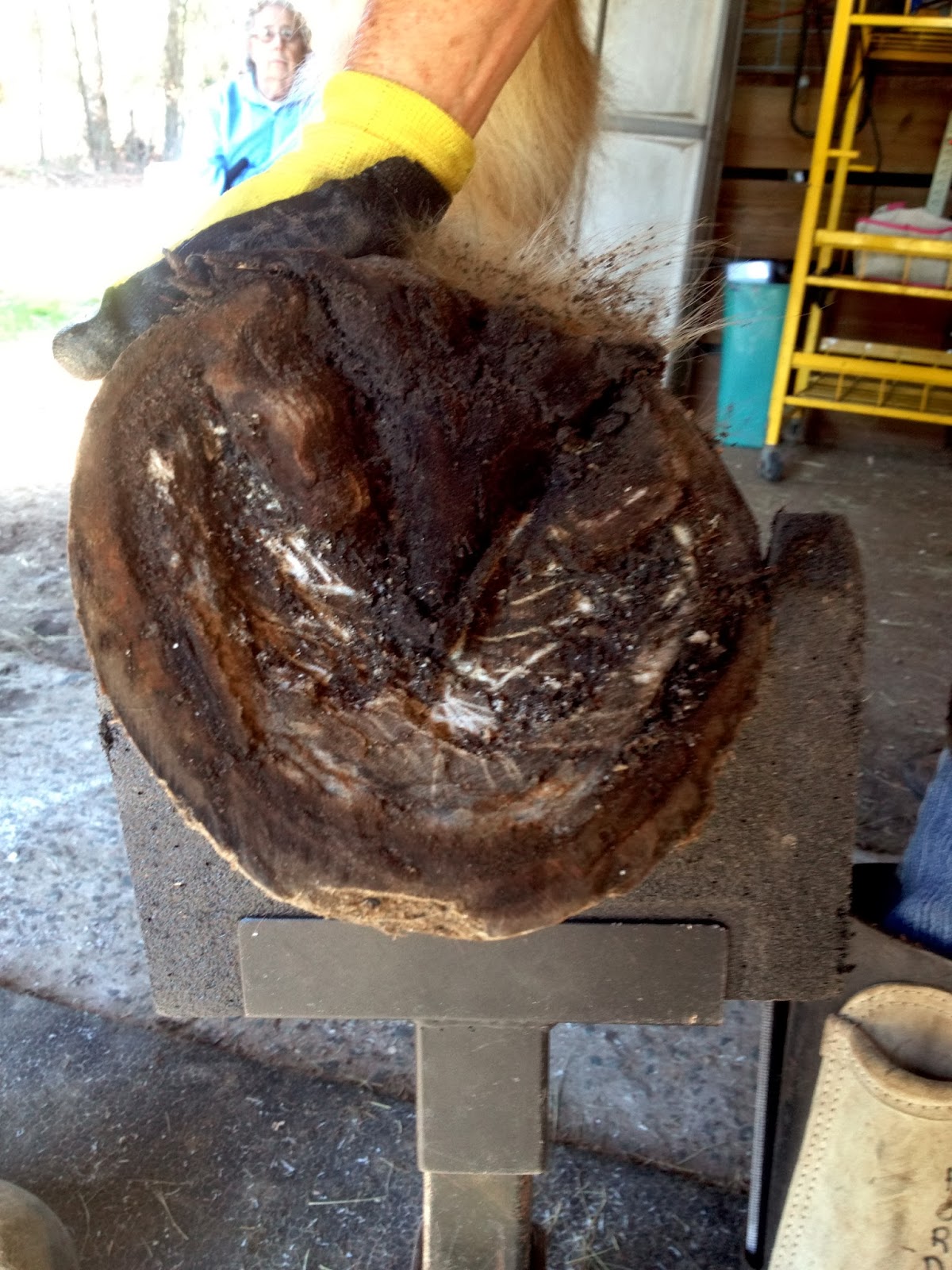 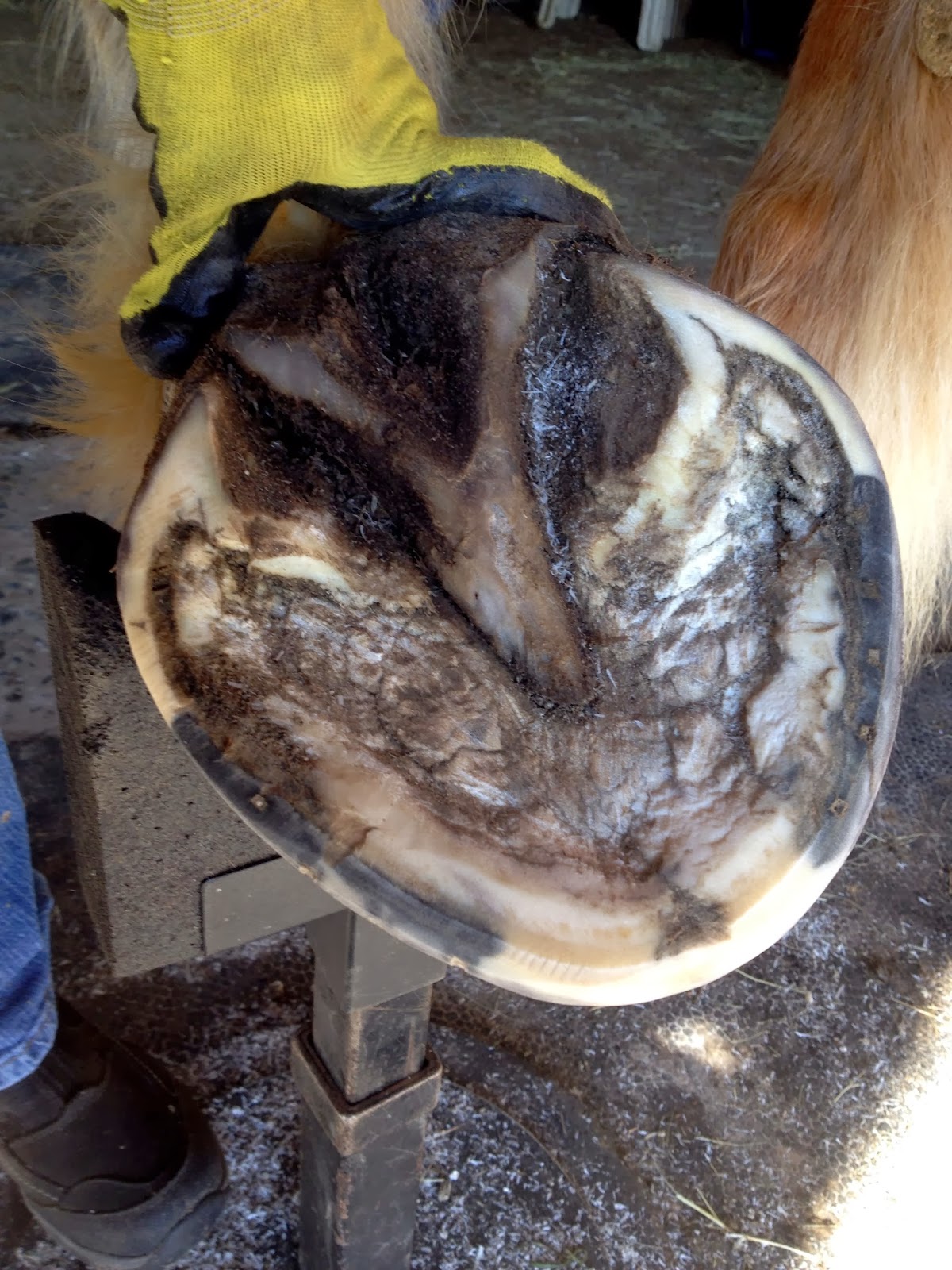 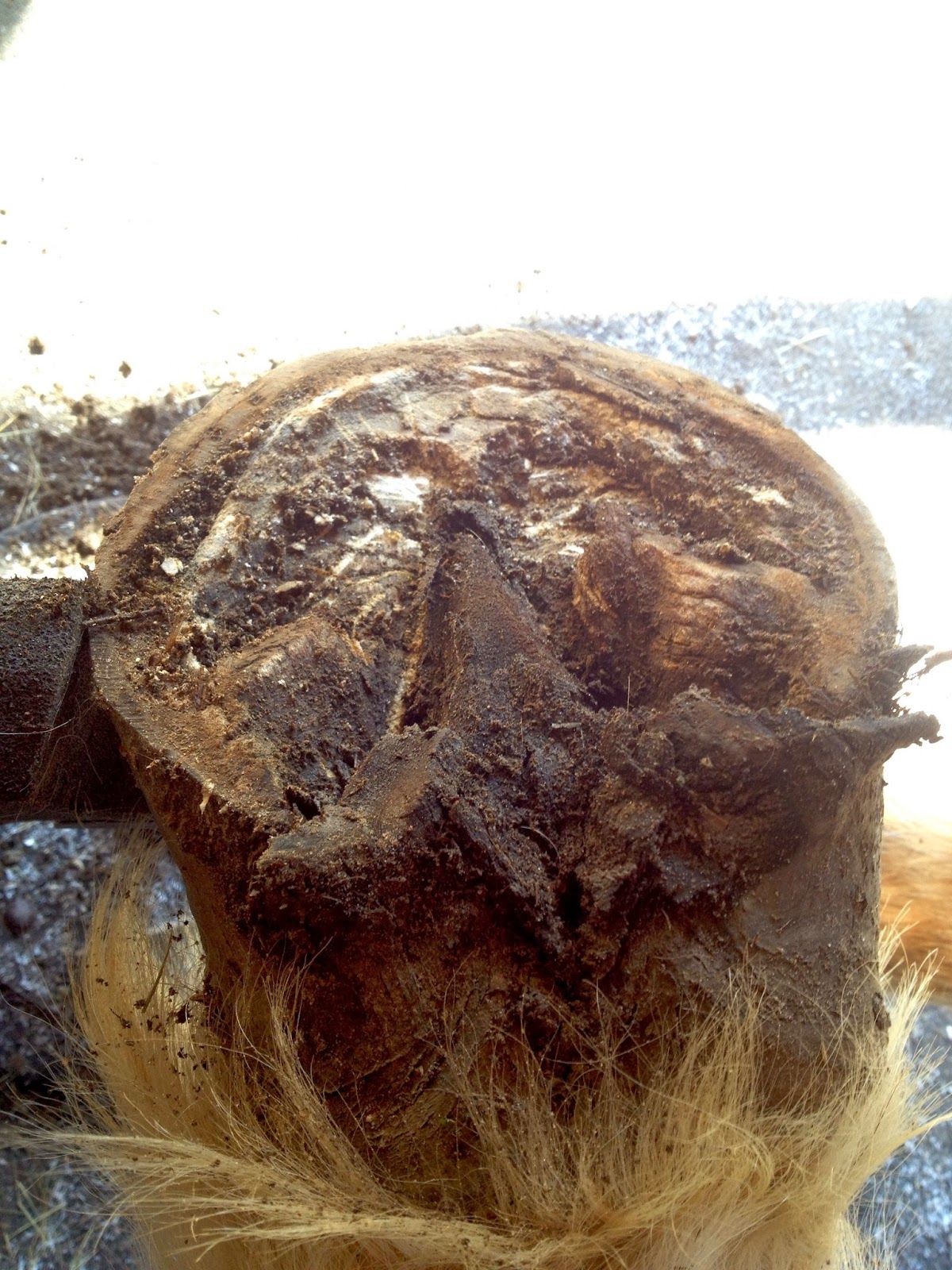 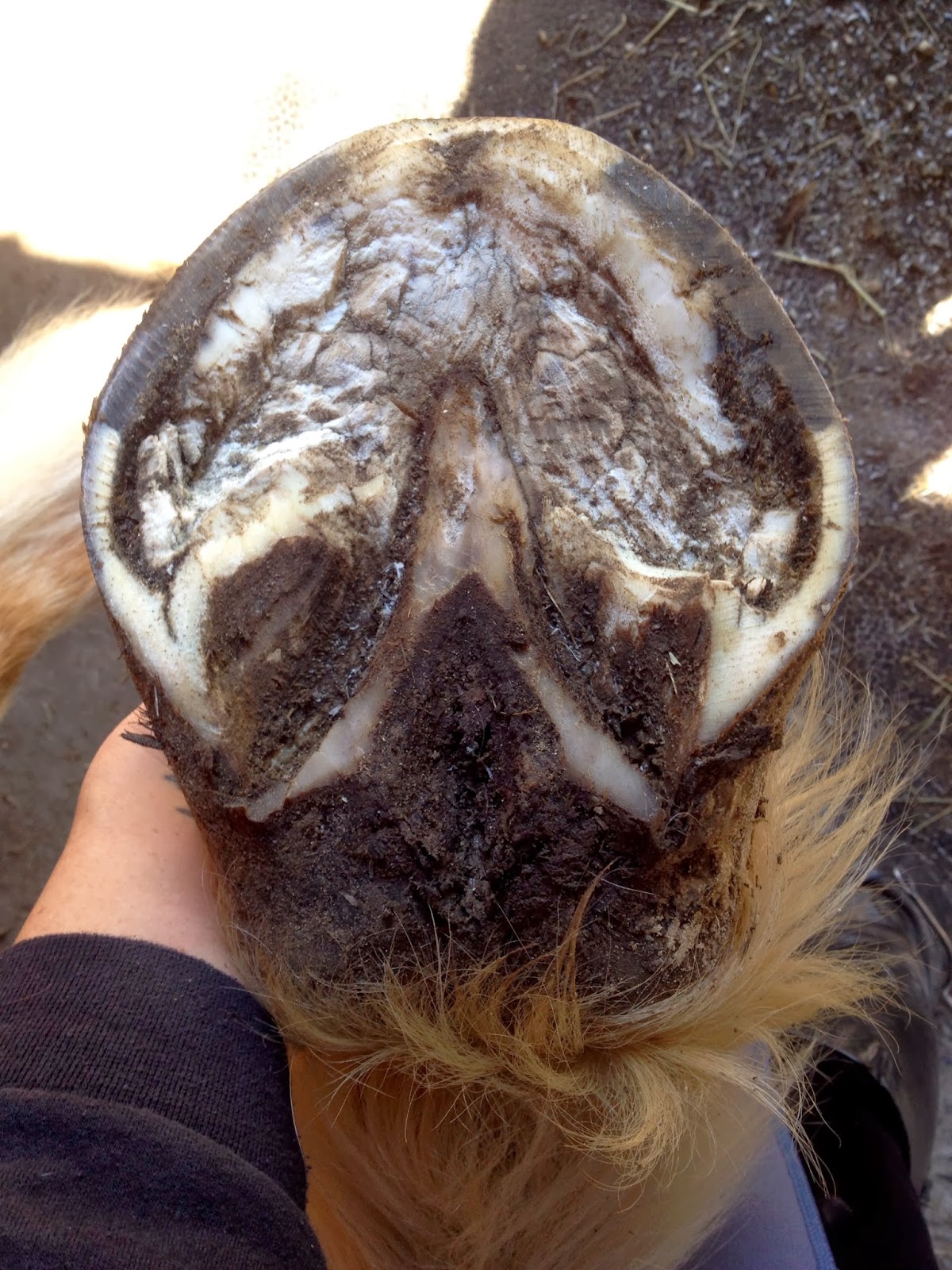 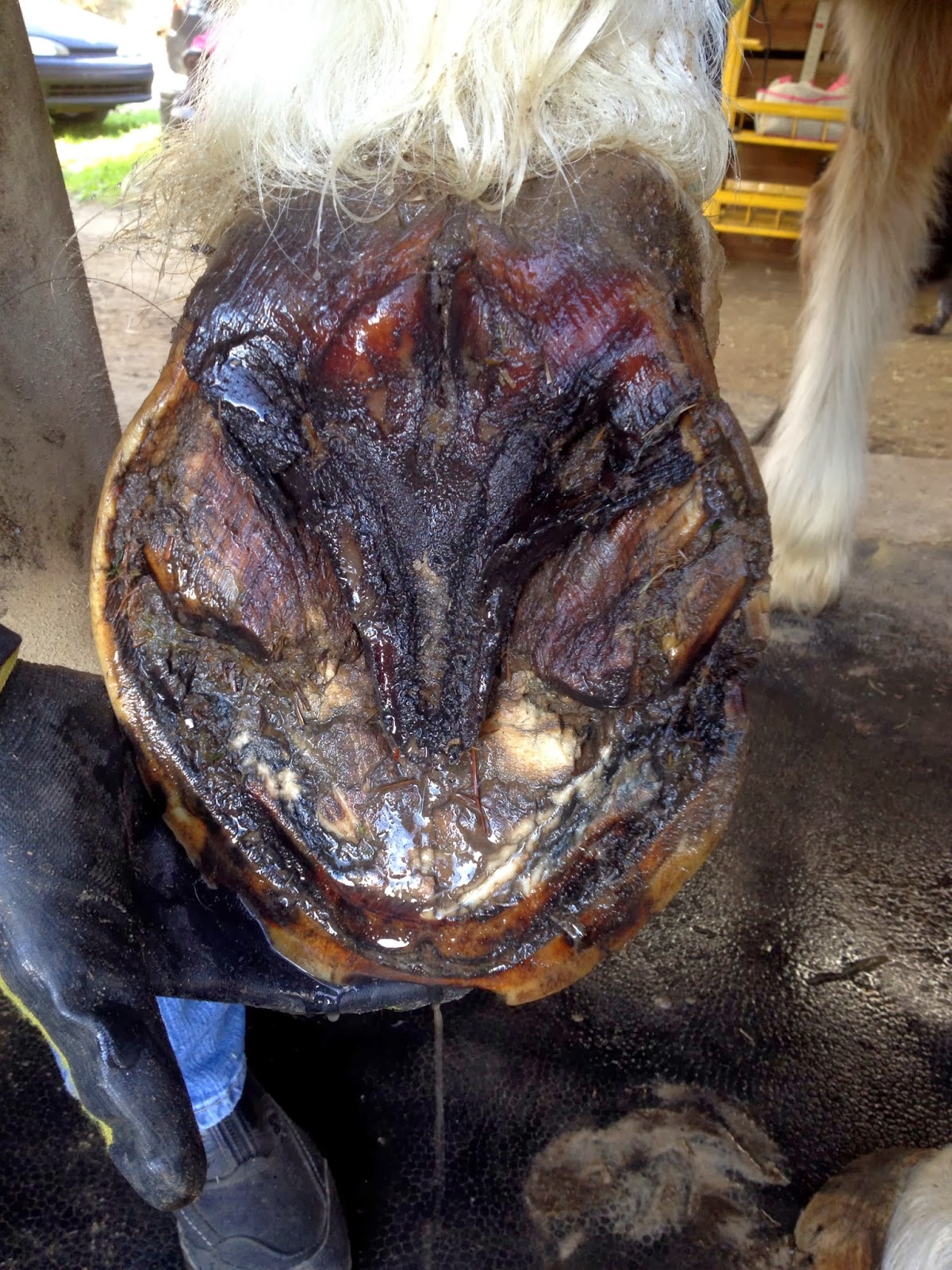 Left hind, before.  Yeah we have some thrush going on. 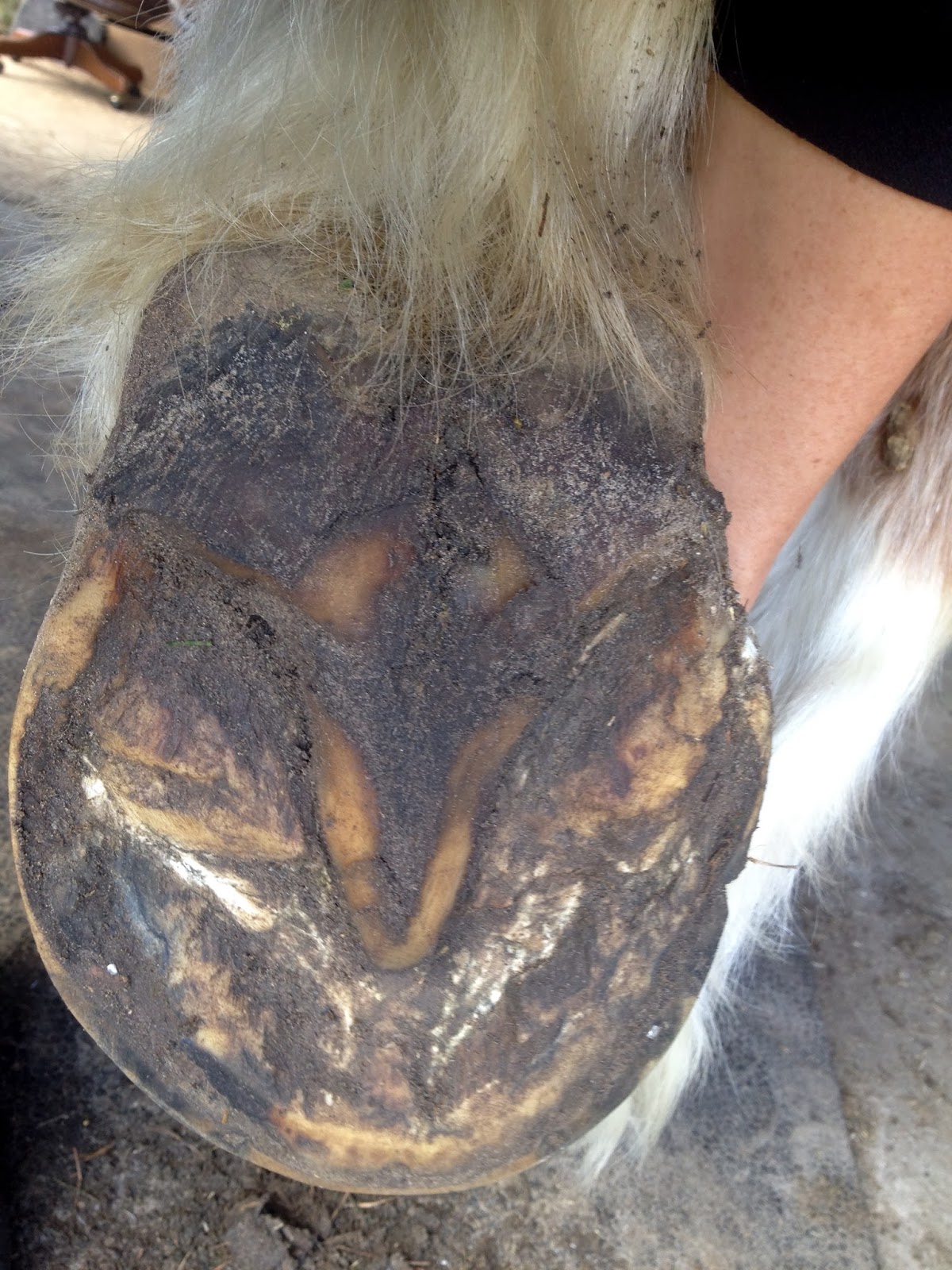 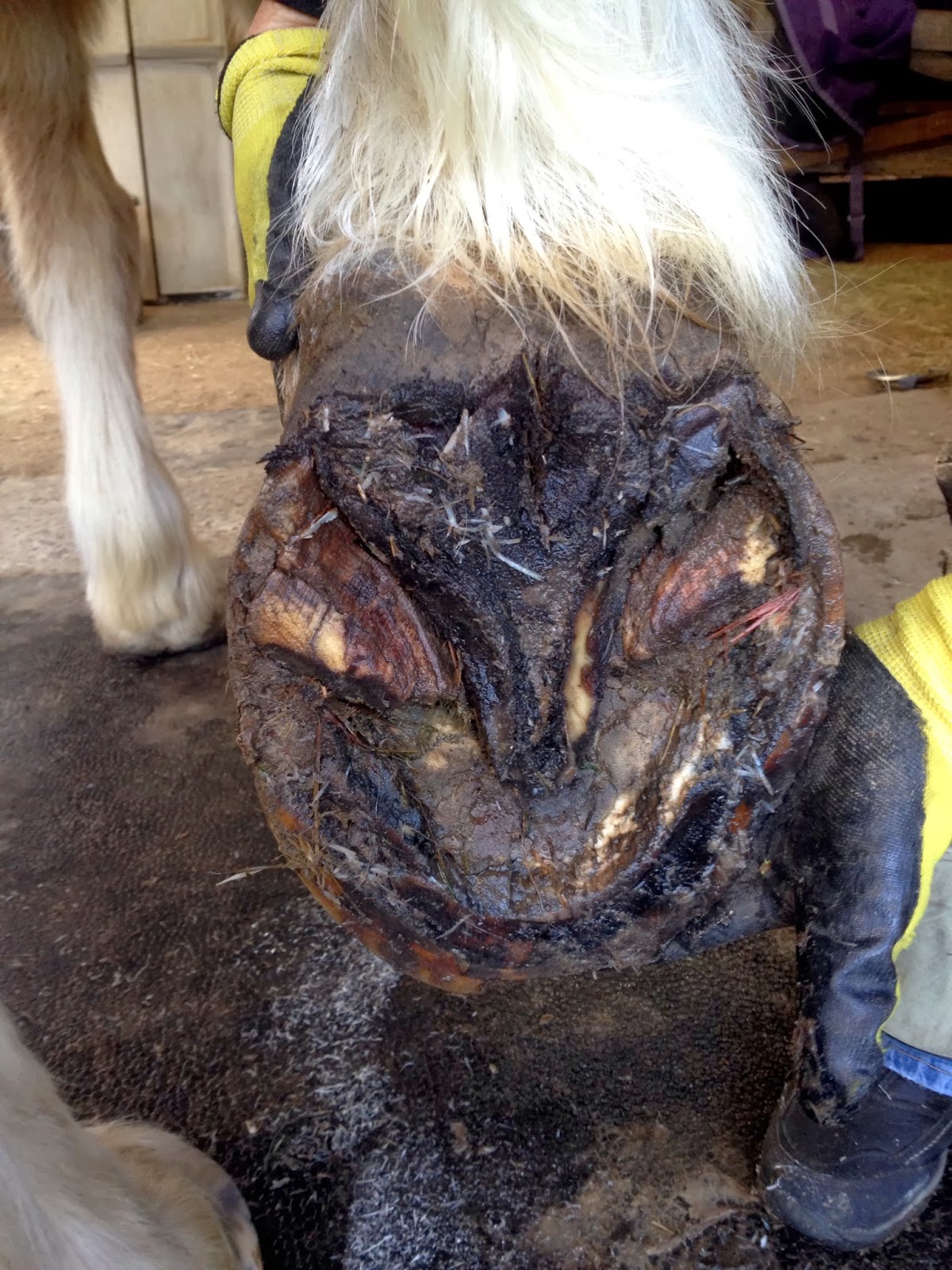 Right hind, before.  Yes, thrush in this one too. 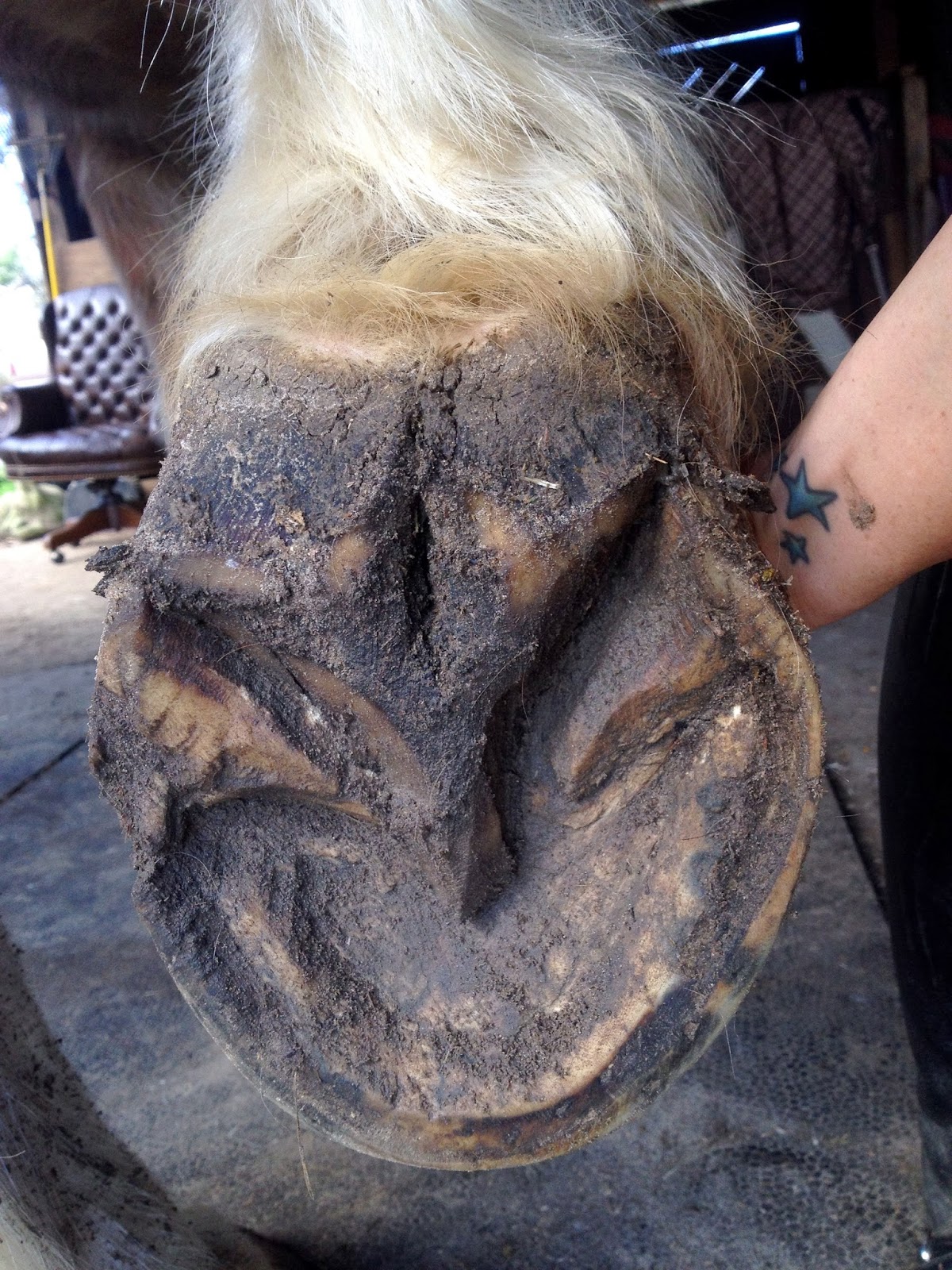 As you can see, his front feet are better than his hind.  There are some issues to address all around but nothing major by any means.  His heels are under run, and his frogs need a little work, we have some thrush going on but none of this is the end of the world.  His left hind is his worst.  But he's also stiff in the left hind and I think that is translating down.  I started treating his thrush with Tomorrow.  That stuff is for cows, but it's AMAZING for thrush!  It will dry his feet right out.  The environment here will help dry his feet out also, he'll be turned out 24/7 and his pasture has a slight incline.  So hopefully he'll start naturally oiling his old joints. 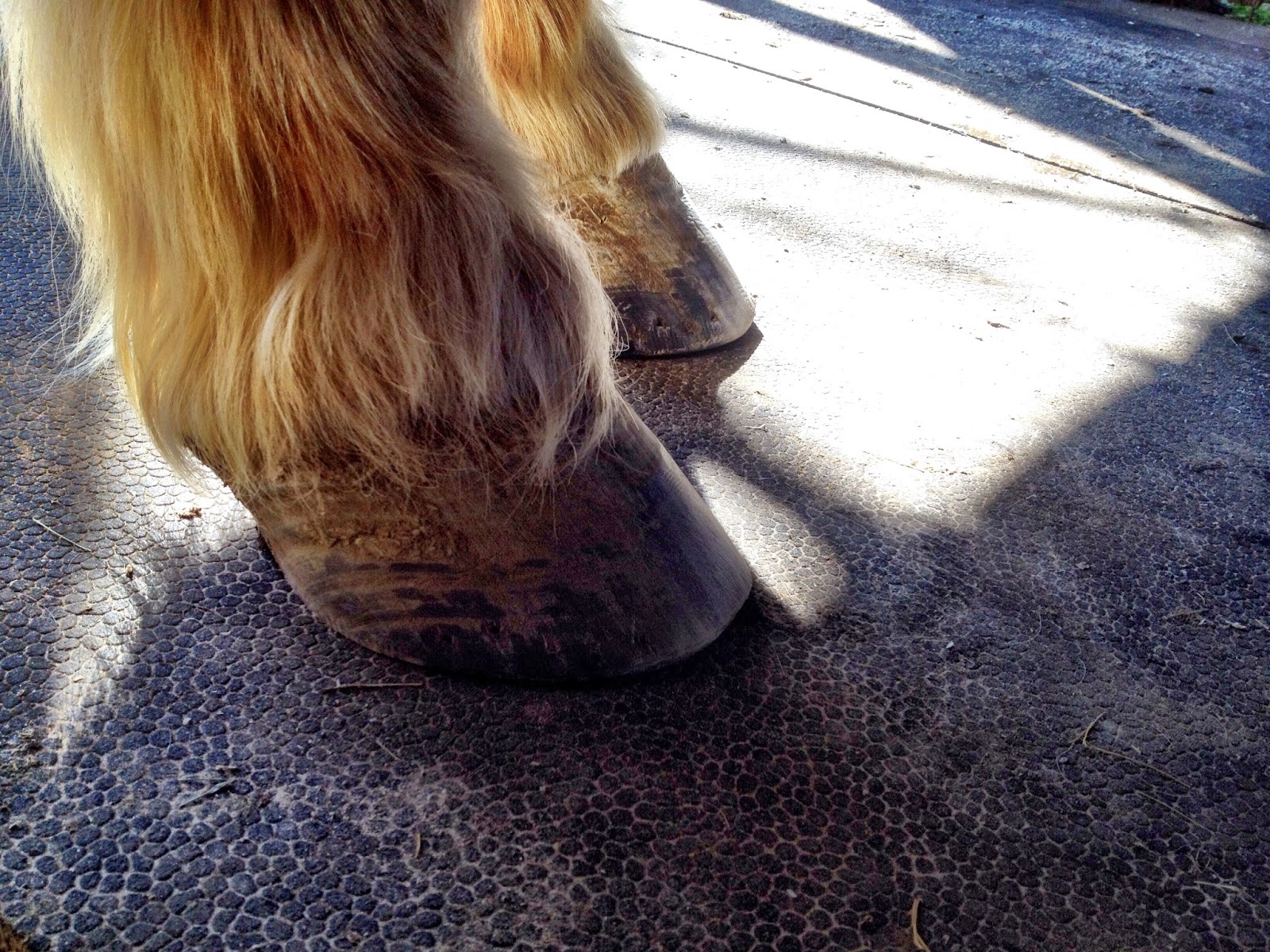 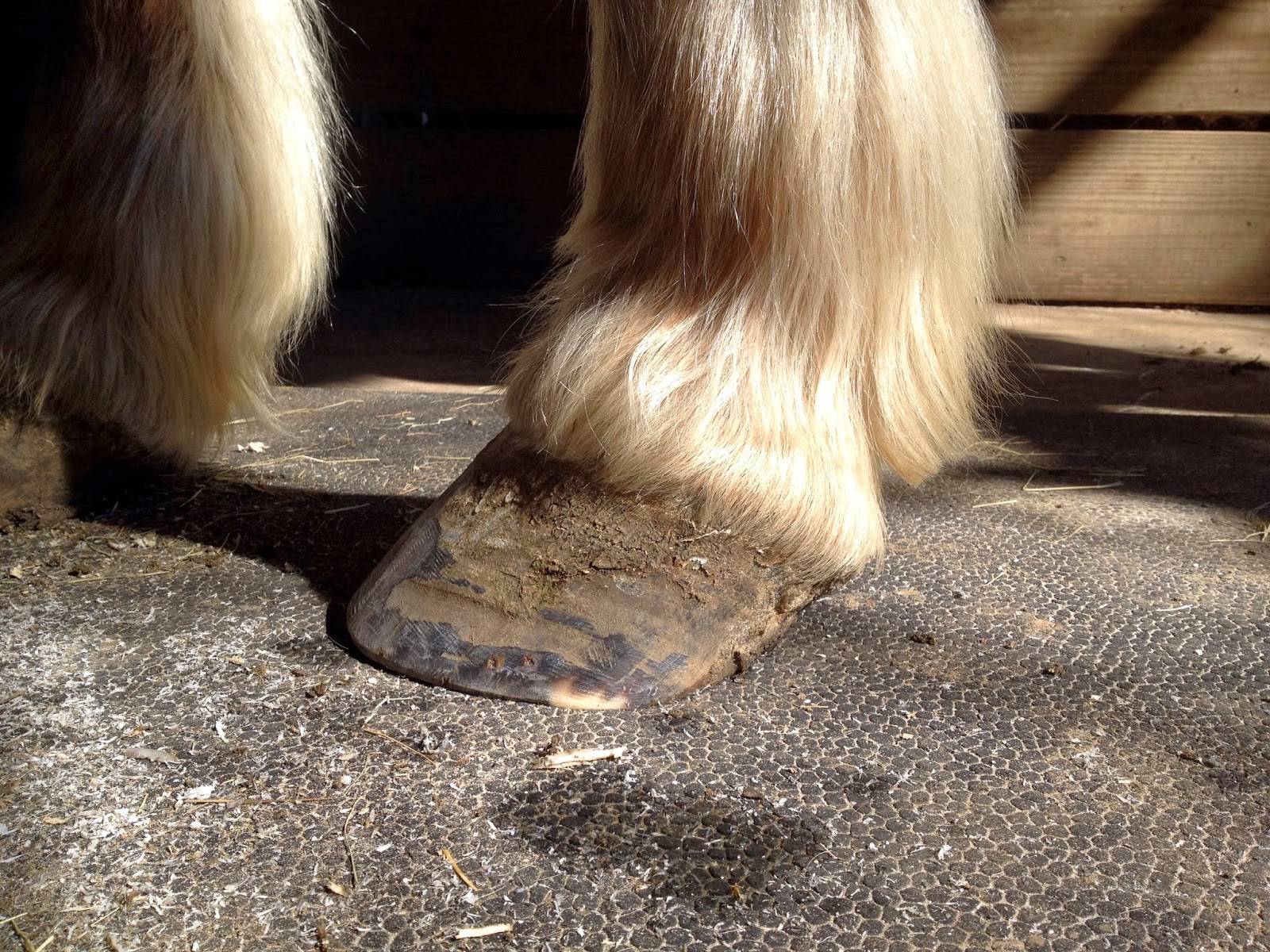 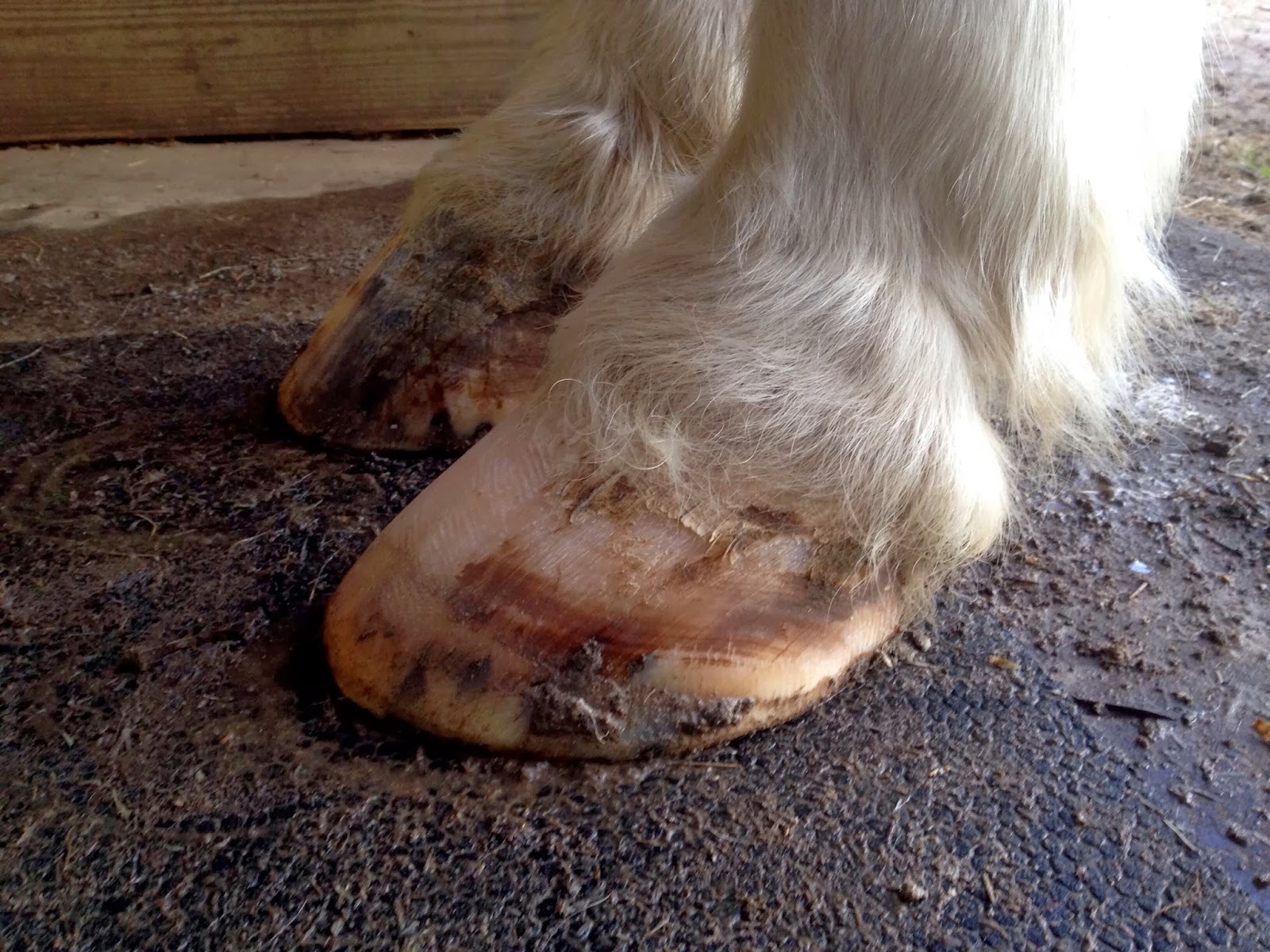 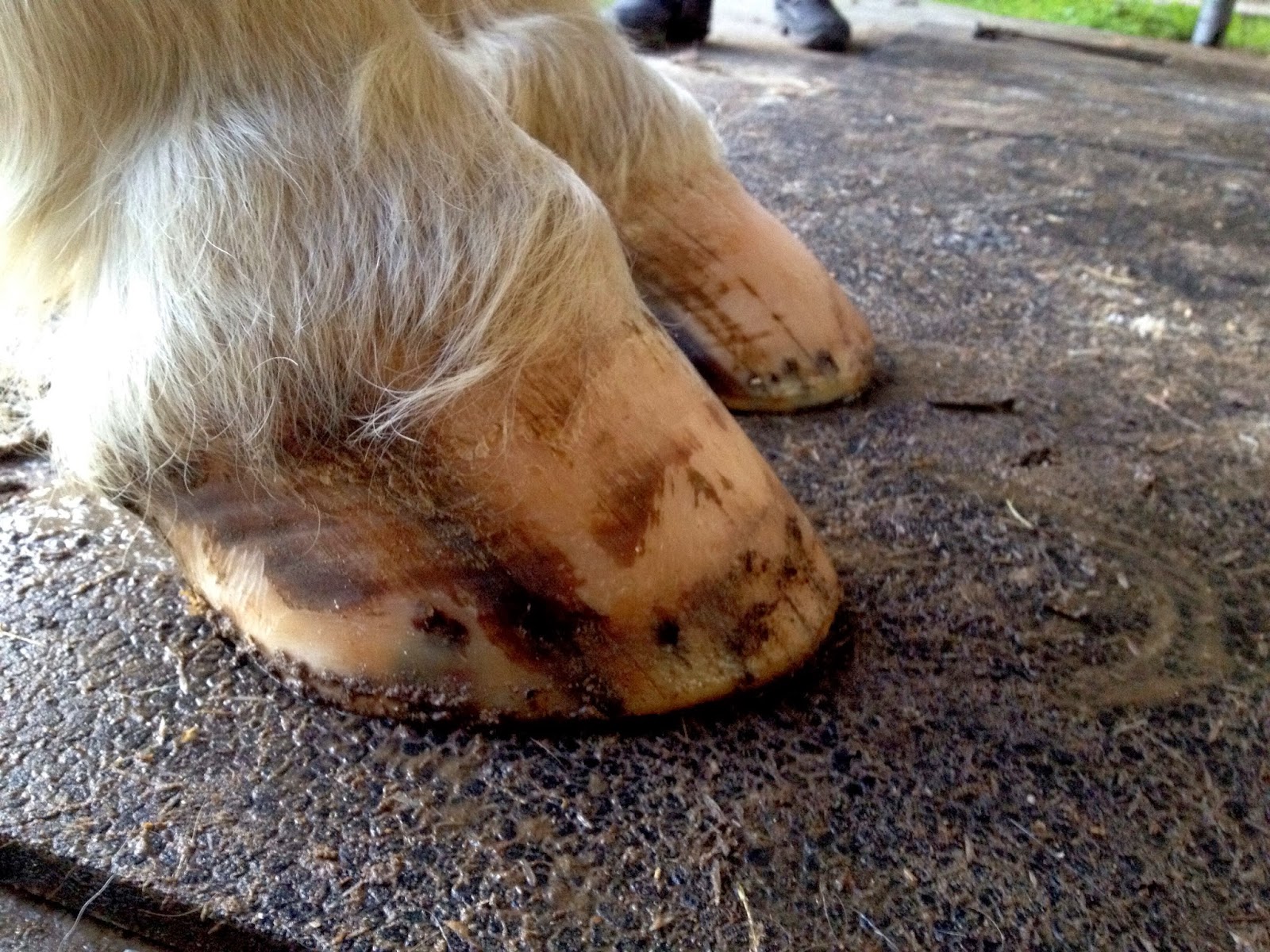 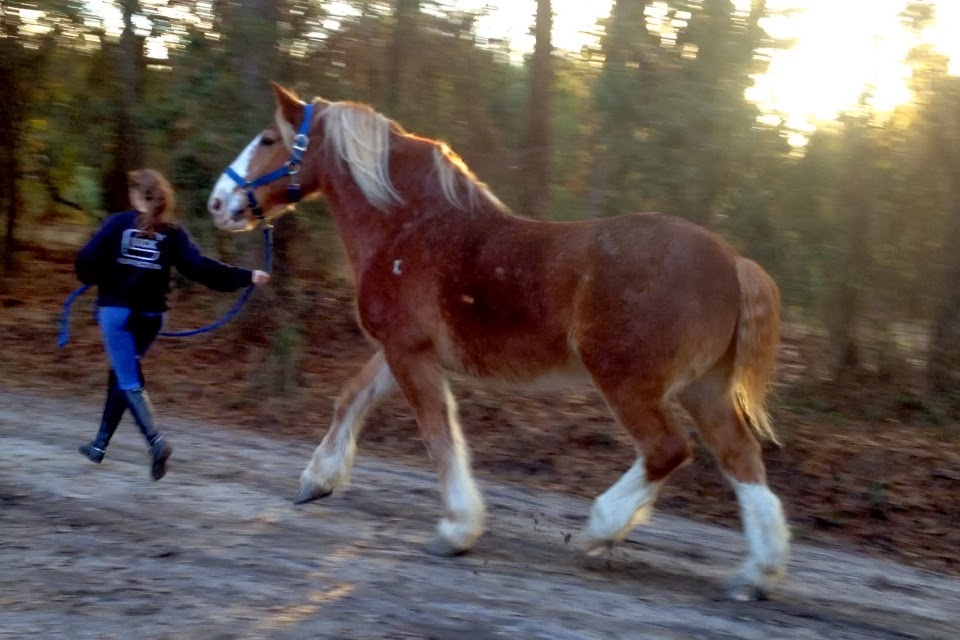 Trotting for Cindy after his trim.

I am going to have the chiro out asap.  I think she can help that left hind out.  I'm sure some of you guys noticed it in the videos I posted of him running around the first day.  After this trim he was already walking a little straighter.  Not that he was terribly crooked to begin with but there was a noticeable change.  The next day he was out running around his pasture with his new gelding friend.  He wasn't sore in the least, he was feeling GREAT!  It's going to be fun to watch the changes in his feet over the next six months!

The next day we had our first ride.  I just wanted to get on him because it's been such a long time.  He's never been a riding horse and I don't think anyone has been on him since I was about eight and a half years ago.  Even then, all I did was get on him for five minutes, take some pictures and that was it.  I made sure to get a video of his reaction when I got on him for the first time here.

He's too adorable.  He wasn't sure what I wanted.  That's why I flicked the reins like I would if I was driving him and told him to walk on.  I just let him wander where ever he wanted.  Once I get the chiro out I'll start getting on him regularly and head out on the trails. 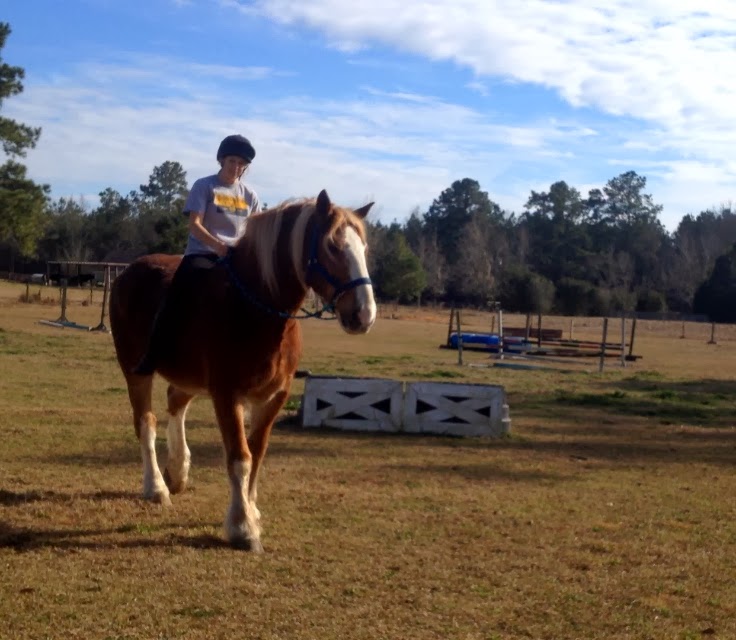 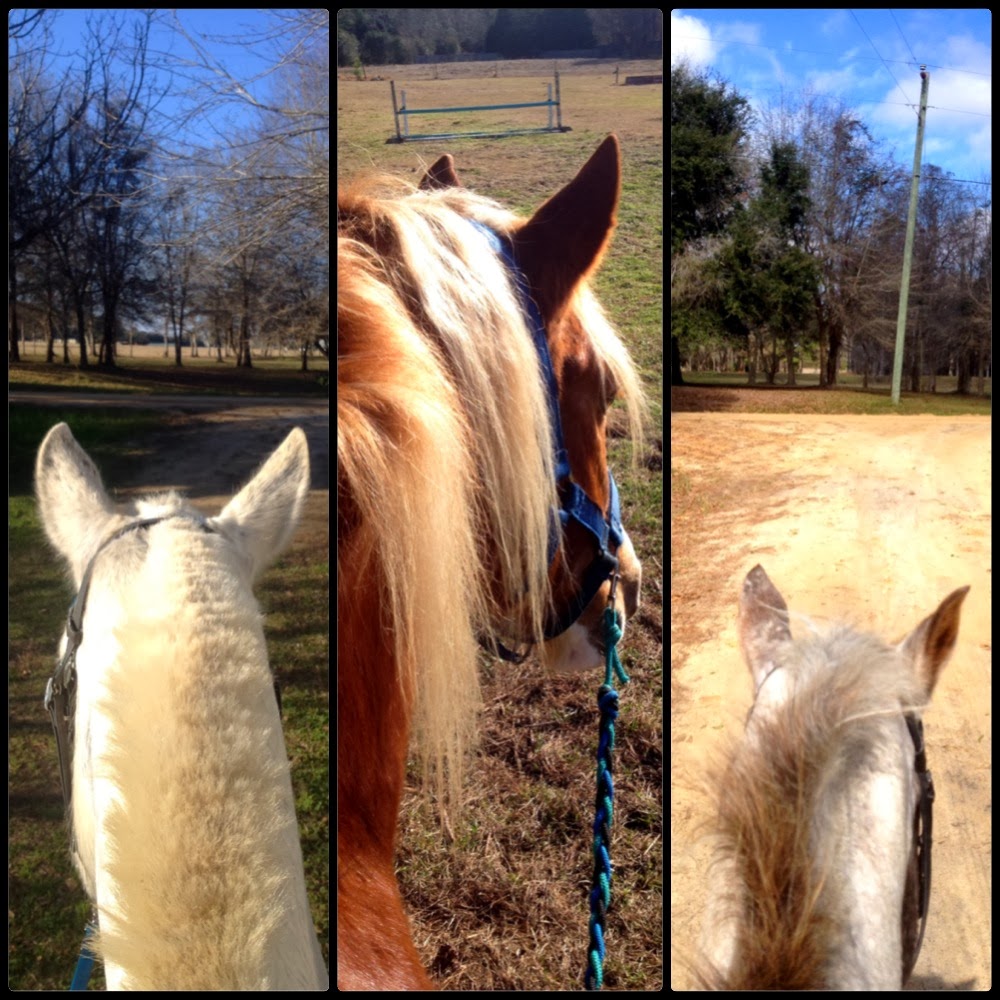 I rode all three of my horses yesterday!


Today I got to work on clipping him.  It's in the 70's here.  There is no need to be a wooly mammoth.  He was a little sweaty yesterday just standing in his pasture. 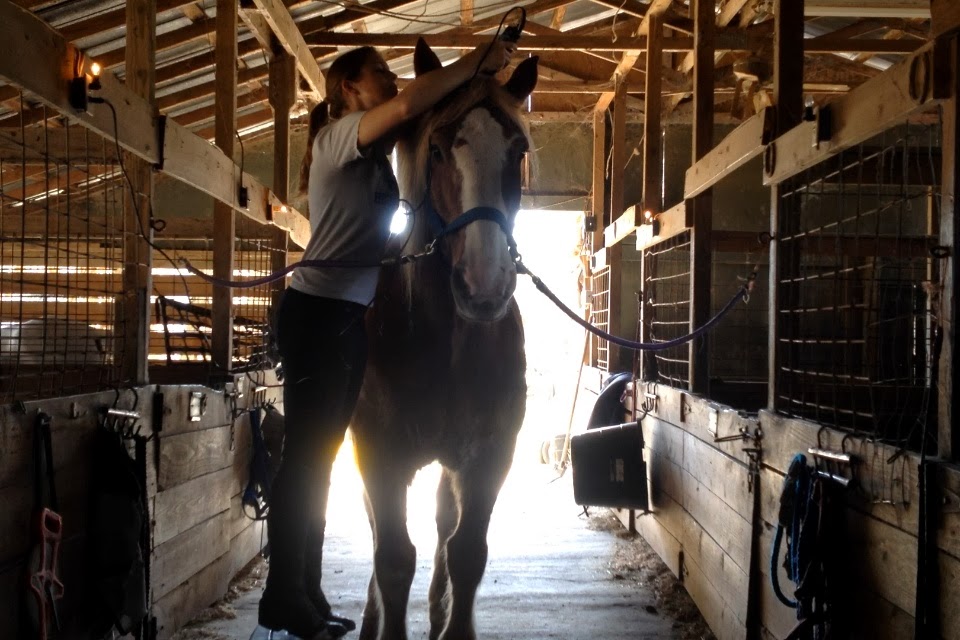 Cleaning up his bridle path. 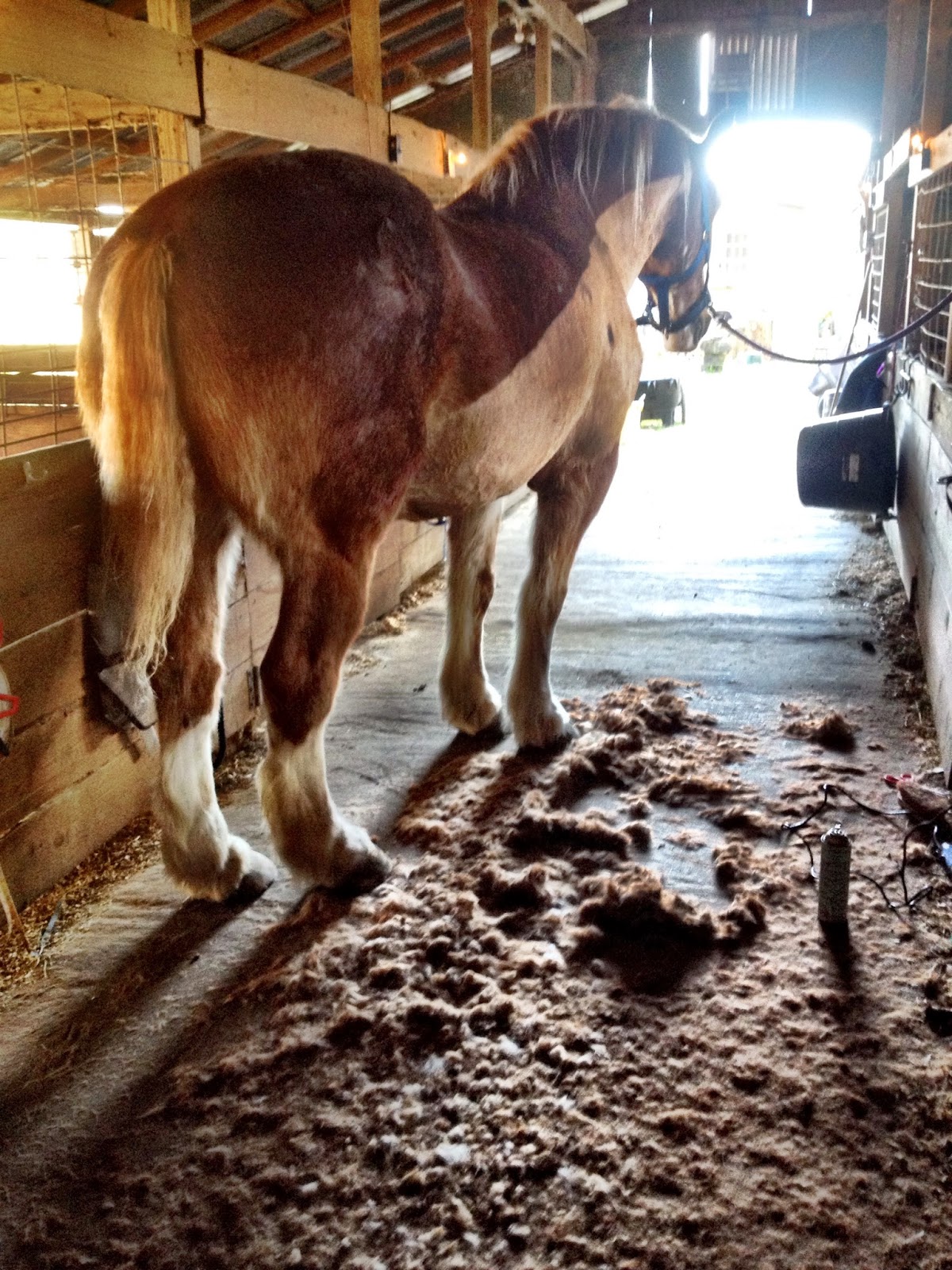 Anybody need a team of minis?  I could make you one. 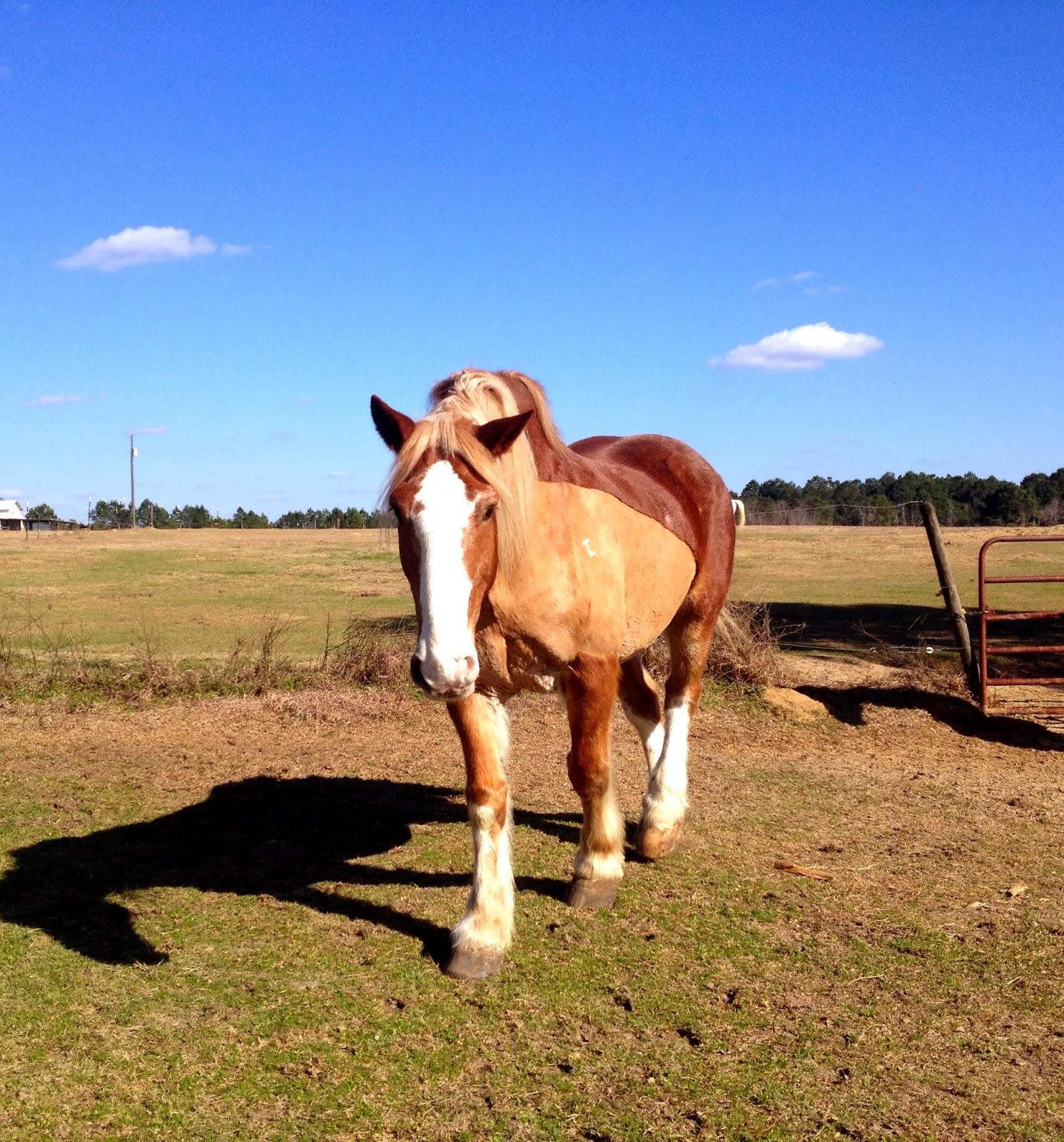 Just when you thought he couldn't get anymore handsome, check out that clip! Maybe Klein and Moch will warm up to him a little now that they all three have the same clip.  I can hope.

I haven't put either of the girls in with him again.  They can see him from their pasture.  They also see me go out there with him and bring him in.  Maybe once they realize I approve of him and that he's part of our family now, and not an intruder, they'll warm up.  Right now he is out with a gelding friend, and he is perfectly content.  Yesterday they were running and rolling around having a good time.  I am enjoying every single second of watching him out being a horse.  Has to think someone died and made him king.  He still keeps nuzzling me too, it's the sweetest thing!

My birthday is coming up next week and the other half told me to start watching for my birthday present.  He told me it was ordered a couple weeks ago but had to be made.  It showed up yesterday!  He got me a BEAUTIFUL jumper necklace!  It's PERFECT!!!  It's no replacement for him being in Afghanistan right now but it couldn't be any more beautiful or thoughtful. 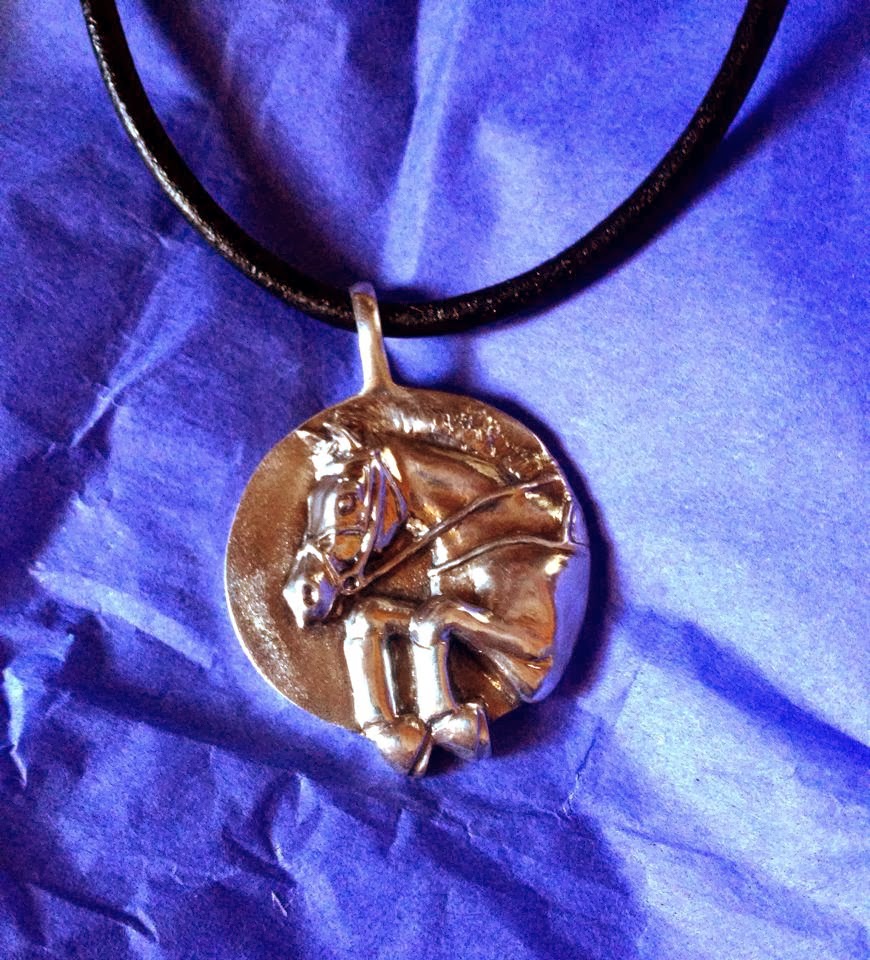 Posted by The Jumping Percheron at 11:15 PM