Klein mare has been feeling amazing lately.  She is so ready to get going with this season already.  Last Saturday I took her out for some conditioning work and someone had turned her boost up before that ride.  She was ready to GO.  We walked some small hills during our warm up then trotted and cantered them.  They are basically small rolling hills that look like big moguls.  They're pretty sweet for conditioning.  After that hacked around then did some sprints from a standing start (she loves these). Klein LAUNCHED into those.  I can't wait to get her going on a regular program.  I'm in the process of writing her conditioning program as we speak, based off our competition goals for this year. 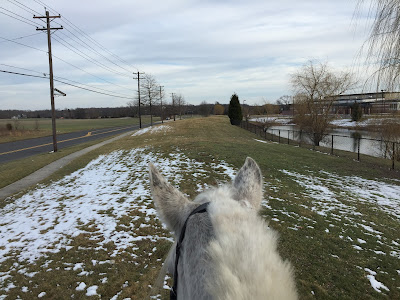 The next day we did some gymnastics with a line of bounces then changed them into a two stride.  She felt great, and she looked great, see photo below: 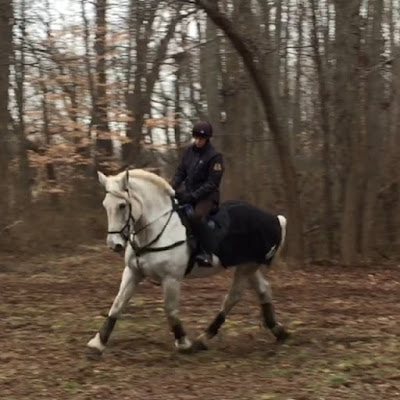 Excuse me while I pick my jaw up off the ground...

We'll do some more cavaletti work this week, hack Saturday, then we are jumping in the 3'3" group with Jennie Brannigan this Sunday.  Next week, we hit the track and some xc jumps.  We would have went this week, but the weather hasn't been cooperating.  It still might happen this week...there's a chance and if it presents itself, I'm taking it!  The Other Half tore some of the house apart to find my GoPro this past weekend (which the movers so conveniently buried).  So when we go to the track to gallop I'll make sure to take it so you guys can go for a gallop with us.

Also, Klein happened to be in cuddle mode Sunday, so of course I had to soak that up as much as I could while it lasted.  When she wants to be cuddled she pushes her nose into my chest/shoulder and wiggles her nose, the proceeds to lean into me, which is why her teeth are visible in the pic below. 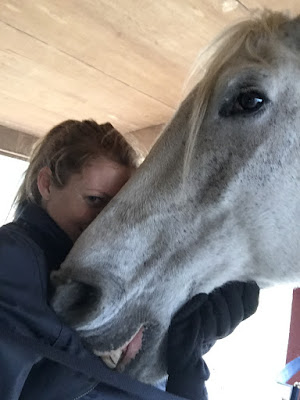 I'm really excited for this year.  I'm over my burn out on recognized HTs.  I've mapped out our recognized HTs for this year.  I just had a terrible experience when I first got to Georgia that basically was caused by one person and soured me to them for a while.  I was spending a lot of money to show recognized and not enjoy myself.  I felt like I had to babysit a lot and do damage control and that really takes the wind out of your sails.

Of course I enjoyed every single minute I spent at them with my Klein baby, but I wish I would have just been there with Klein, and that's it.  There was even one where I was competing with a stress fracture in my leg due to the incompetence of some doctors on base (it took them two months to figure out what the injury was) and got food poisoning from the food at the competitor's party AND on top of that still had to deal with the aforementioned person, who will remain unidentified.  It was that weekend that was the last straw for a while.  I paid about $1,000 for the weekend (hotels, food, alcohol, diesel, entry fees, etc...).  I arrived Friday and could not get the trailer loaded fast enough on Sunday to go home.  I wanted to hide and just go do low key things with my girl and not be bothered.

We went to equestrian parks in Florida to hack around, we schooled xc alone at facilities we hadn't been to before for a change of scenery, we did hound exercises with a local fox hunt, we went to the beach.  We had a great time just being left alone.  Klein is so independent.  She has always been that way.  We don't need a buddy to go do anything.  We can go anywhere we want together.  That is one of the things I am thankful every day for with her.  I can take her to some strange place with a setting she has never seen before and off we go, happy as can be.  As long as we have each other, that's all we need, we're good.

We had a great time last year on the local CT circuit competing at Training Level CTs (USEA Training Level Dressage and 3'3" stadium), she even ended up the year end division champ.  It's time to get back to HTs.  This is the face of a mare that loves her xc: 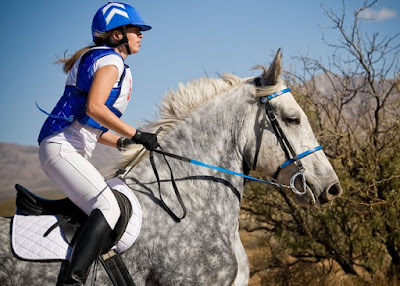 Posted by The Jumping Percheron at 9:44 PM