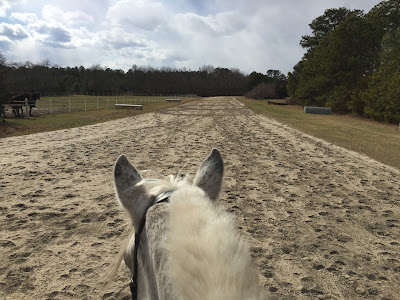 A track and some xc jumps.  We'll take that, even in 23 degrees.

Of course, for the clinic this weekend it will be the coldest day this winter.  The high is supposed to be 16.  We'll be in an indoor, but still.  That really doesn't make THAT much difference when it is that cold.  Once I saw the weather for this week drop off to a ridiculous level I seriously questioned if I would be dragging us out to this clinic.  I rrrreally want to take a lesson with Jennie Brannigan.  I mean did you guys see her kicking ass last week in the Eventing Showcase?!  She owned the hell out of that xc course.

I've been doing really good so far here in New Jersey.  I haven't been cold yet.  I've been pretty comfortable.  Everything I bought to ride in this winter has served me well and I've actually been TOO warm a couple times and never cold.  But 16 degrees worries me.  That will be the coldest weather I have ever ridden in, in my life.

I'm no wimp.  I've done a lot of challenging things that require you to stfu and man up (the military does that to you).  I've crawled around in a full chem gear suit and gas mask with a rifle for hours in nasty heat and humidity, I've done triathlons where the swim was open water in the ocean, ran half-marathons, worked outside all night long through the entire winter in Salt Lake City driving Wes, had my ass beat plenty of endless times in CrossFit by big WODs, but you won't find me tapping out.  I'd have to pass out and be unconscious before I'd quit.  But a couple hours in 16 degrees had me seriously worried if I could do it.

What do you do in this situation?  You take the next day off work and go ride in some NASTY winter weather to teach yourself to man up.  The next day's forecast?  23 degrees and windy.  Oh, joy.  Just what I was hoping for.

There is a track and small xc course not too far from us so I took Klein there.  Flurries were in the air as we were loading in what felt like 16 degrees with the wind chill.  I started to wonder if I was about to do one of the dumbest things I'd ever done.  We already committed though.  So unless some serious snow started happening, or it started raining, we were going.

The flurries went away, the sun was out, that still didn't count for anything.  The owners of the facility told me I could just ride in their indoor if I wanted.  I was like nope, we came here for the track, we'll be on the track. 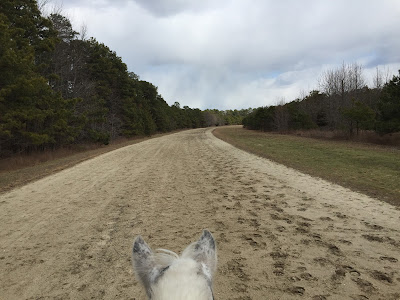 Looks amazing if you didn't know what the weather was like when this was taken.  There will be plenty nice days spent here though to make up for this crappy one.

With the windchill it felt like 13 when we headed to the track.  I came around the corner and was hit in the face with one of the coldest winds I have ever felt.  Someone might as well have just punched me in the face.  I started to think this would be a pretty short ride but continued on.

I made sure that I gave Klein a long warm up.  Her quarter sheet never came off.  We warmed up for 30 mins before starting with real gallops. Once we got moving I felt a little better...until we came around the corner where it felt like we were in a 13 degree wind tunnel. 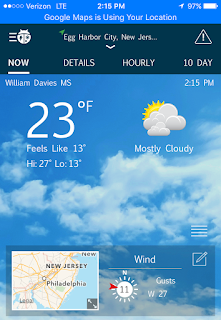 Klein felt great, and didn't seem to mind the cold or wind.  We got our gallops in and jumped a couple xc fences.  We'll school the xc for real next time.  We were out for an hour and got seven miles in.  Klein was sweaty by the end of our ride, and surprisingly, I was a little warm.  I think I had one too many layers on.  My feet and hands were fine too.  I realized then that I think we're going to live on Sunday.  If we can put up with that crap for an hour outside, we can definitely deal with an indoor in that kind of temperature.

The best part of all this?  It will be back in the mid 40's this week and 51 by next Saturday.  Of course it will.

Here's some helmet cam from one of our gallops:


Yesterday was some physical AND mental conditioning!  The whole time I kept thinking of this video...


Fast forward to the 3:00 mark to get to the point.  Even if you couldn't care any less about CrossFit, watch it.  It's not specifically about CF, just some mental conditioning.
Posted by The Jumping Percheron at 10:04 PM