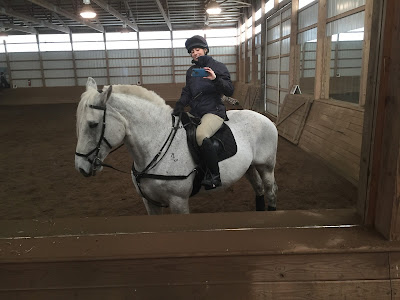 I feel like my ankle monitor has been cut off and we have been officially taken off of house arrest!  Very shortly after our arrival to our new home an EHV outbreak of the neurological strain took place just over the border in PA.  People in NJ were on the fence about just how worried to be about it.  While some clinics and shows were cancelled, others were not.  I took the safe route and waited the full month before hauling out anywhere.  Thankfully we have plenty of room to ride both on our own property and the surrounding area, but not taking a horse anywhere in over a month was weird.

There is a barn that is close to us that hosts Sally Cousins all the time.  The owner is an active eventer and instructor that has evented at the upper levels.  So, off Klein and I went this Saturday to take a jumping lesson with her.

Lessons were in the indoor that day, which is full of mirrors of course.  As soon as Klein walked in, the most beautiful mare she'd ever seen IMMEDIATELY caught her eye.  She had to stop and look at her a couple times. 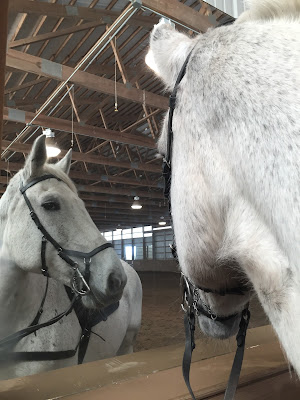 Checking out her beautiful self.  I mean who can blame her?? 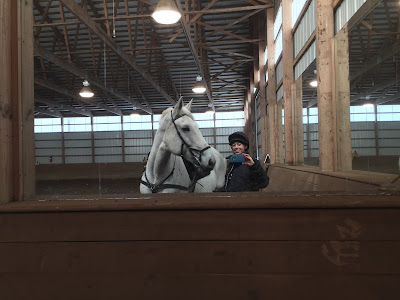 Still looking at herself... 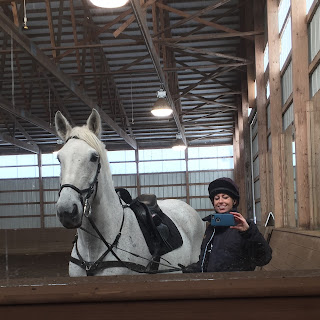 I feel partly responsible for this.  I only tell her she's the most beautiful horse on the planet every single day.  Here she is agreeing with me.

We warmed up while the lesson before us finished.  She warmed up great.  Since it was our first lesson with this instructor I didn't have anything specific in mind.  Whatever she felt was necessary to get a feel for us was good with me.

We ended up doing course work on a 3' course with tight turns, jumps on angles, oxers on a long two stride, and getting Klein to get her nose out in front of her a little more.  Klein was having a blast!  The instructor loved her!

She pointed to one oxer and said after the first fence we were coming around and jumping the oxer on an angle and asked if Klein would be ok with that.  I just smiled and laughed and said "OH YEAH!"  Klein loves stuff like that, and we regularly incorporate it.  I appreciate the instructor asking, that was nice of her.  It feels great to know that Klein is 101% up for anything.

She also had me work on staying off her back a little longer and letting her stretch out a little more between fences and also making sure I give her an opening inside rein when she needs it for the tight turns.  It's a little tight when you have two oxers with a long two stride between them and they are exactly dead center of the indoor, but we got it done.  First time through we put three in and our instructor was like "OMG, she made that look like it was SUPPOSED to be three!"  A lot of people expect Klein to have this giant stride because she's big, but, she doesn't.  She can fit through a line of 3' bounces that are 10' apart.  She's very capable of adding and subtracting.

Next time around the instructor told me to squeeze her in the air over the first oxer to get her to land on a longer stride.  Guess what?  Two strides.  I had to make sure I had my leg on too as soon as we landed.  Klein felt great through it.  Klein was perfect Saturday.  We had a great time.  We were challenged, we learned, and we had a great time doing it.  We will be in regular lessons with this instructor. 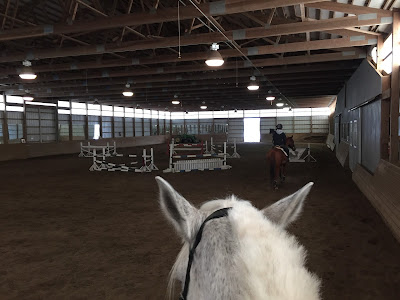 We are looking forward to our Jennie Brannigan jumping clinic this month!
Posted by The Jumping Percheron at 9:28 PM