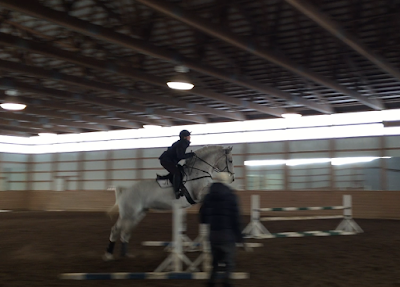 I love Klein's expression, she was enjoying herself!

Yesterday Klein and I braved the 6 degree weather and went to our Jennie Brannigan.  It was miserably cold outside and the fact that my truck was even whining despite being plugged in all night didn't help my motivation.  I didn't hook up my truck and trailer the night before either, because I was seriously doubting if I could bring myself to go.  The day before the clinic was super windy and being outside in that is what had me starting to question if I would really be going anywhere the next day.  It was COLDER than when we went to the track the other day.

When I pulled my truck and trailer up I'm pretty sure I could hear Klein saying "This is my stupid human, there are many like it, but this one is mine."

I tried to tack up outside but when I went to do the last buckle on Klein's girth and my hand hurt too bad to do it I finished getting her ready in the barn.  Just from being outside trying to tack up my fingernails were painful, weird, but true.  The barn wasn't as cold as I thought it would be, neither was the indoor.  So that helped.  There was still no way I was taking my jacket off despite having two shirts on underneath.  I felt like the Michelin Man all layered up.  I also felt super uncomfortable riding with so many layers on. 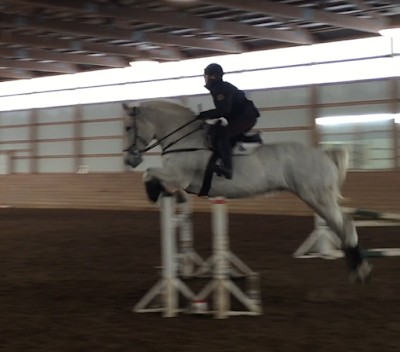 Open hip angle brought to you by feeling like the Michelin Man.

I had a pretty shitty attitude until after my ride.  I just wasn't happy to be out in that cold.  Jennie said that was the coldest weather she has ever taught in.  Really, that's pretty tough to still come out and spend all day freezing your ass off.  She is an extremely successful rider and being that she's spending her winter in Florida I am sure there are no shortage of riders down there that she could have filled her weekend with teaching in Florida.  Yet, there she was.  And the owner of the barn that hosted it, she is one tough mofo too because she was still teaching that weekend and riding several of her own horses in the clinic.  There were barns here cancelling events because of this record breaking weekend.

We were in the 3'3" group with two other riders.  We warmed up and started trotting a course with all the poles on the ground.  I had been warned that Jennie is very technical.  She's got some razor sharp accuracy and is huge on developing your eye, and you better be looking for your next jump before you even start to turn a corner in its general direction.

Trotting little jumps is always slightly embarrassing for us because Klein disrespects the hell out of them.  But, who's fault is that?  We never trot them.  Obviously, we should.  She WALKED through a tiny oxer.  I'm not joking, she walked through it without touching a thing, and stopped at another small one in our warm up.  Now if those would have started off at 3' or 3'3" we would have no problem.  I couldn't wait to get to cantering the fences. 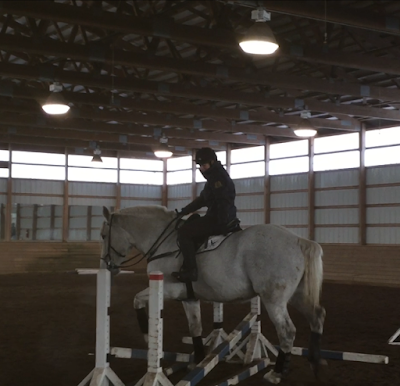 Walking through the tiny oxer, well, because she can (and her rider let her when I should have given her a smack with the crop).

Jennie built the course up with each round, we went from trotting it to trotting some of it then landing in a canter and making sure to get our strides correct from there, then cantering the whole thing and adding more fences and changing the course as we went.

Here is some of our warm-up:

She had some tight turns in our courses, a couple lines with different striding, a bounce in one course, a chevron in another.  It was great because she had so many elements in the courses.  You had to pay attention and think.  She said she likes to catch people cutting turns and her courses will immediately identify you if you are one of those people. 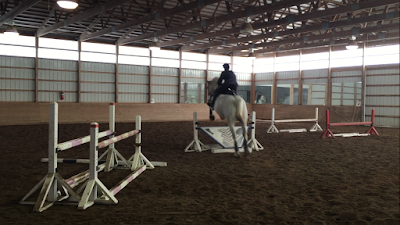 Here is some more video from the rest of the lesson:


Klein had another stop at this green vertical.  Jennie said it was because I was kind of rushing her at it and to hold her until I see the distance.  I'm glad she pointed that out because in my mind I didn't think I was rushing her, so I would have never caught on to that.  She also kept saying she liked Klein because she makes you ride her.  Funny how things change, Klein used to never used to be that horse. As she has gotten older she has gotten my number a little bit and she is making me a better rider by doing so.  She is making me step my game up.  Stopping for her is extremely rare so when it does happen it just throws me for a loop and the first thought in my head is omg is she ok??  Is something up with her today?!  I've now had two pros tell me to stop getting so caught off guard by it and just go, no one cares, go.  She also said that she could tell that Klein and I have a really great partnership together.

I am glad we went and didn't wimp out and stay at home, despite my shitty attitude.  One other cool thing, Klein was doing some flying changes, our flying change work is paying off!  I'm pretty excited to see that.  Thanks again to my friend for taking video, and taking our quarter sheet when the lesson started, and handing it back to me at the end.  If I was her, I would have probably acted like I didn't know me that day.  Klein was awesome as usual.  Even though we had a few moments we did the best could with what we had overall that day and our moments were 100% my fault.  Because when I fixed myself and RODE my horse, we were good to go.

Jennie is coming back next month and I'm looking forward to riding with her again and learning more from her.  I'm trying to decided if I should do another group jumping lesson or do a private flat lesson next month. I love her technical aspect, because as someone else said, she exposes holes, but the idea of having her to myself for a whole lesson is tempting.  Plus, she has some serious dressage skills.
Posted by The Jumping Percheron at 11:00 PM