Tack Shopping With a Hungry Husband 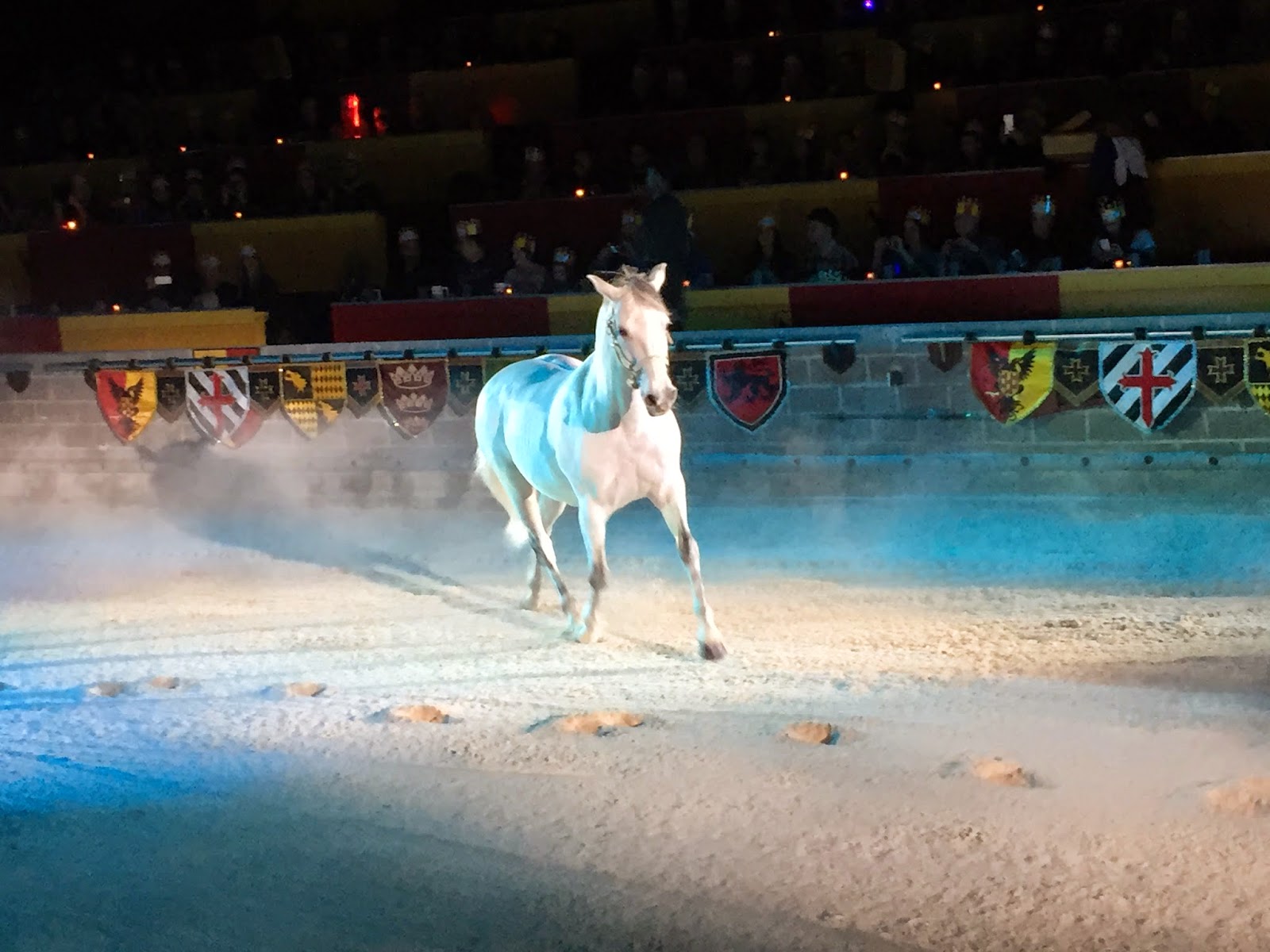 I mentioned in my last post that we were in Orlando last week to go to the Mecum Auto Auction, aka the world's largest collector car auction. 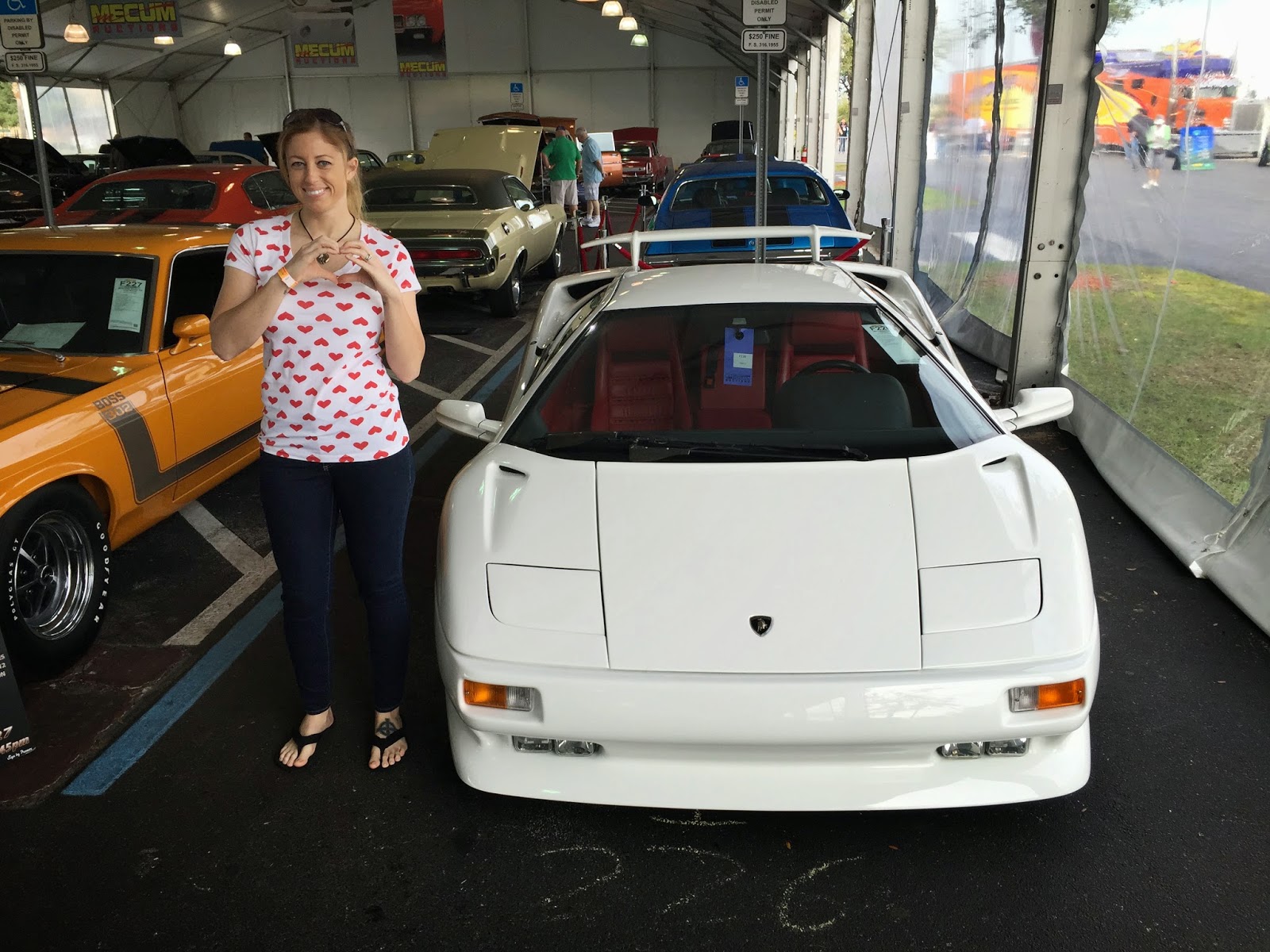 So many awesome cars.  They even had Burt Reynolds' Bandit car there.  There were over 3,000 cars there.  Collector cars, exotic cars, muscle cars, etc...and they were all spotless and perfect.  There was a '69 Hemi Daytona that went for $900,000.

Anyway, horses.  That meant a mandatory dinner at Medieval Times and stopping in Ocala on the way home since Ocala is well, on the way home. We are lucky enough to only live just over two hours away from Ocala. 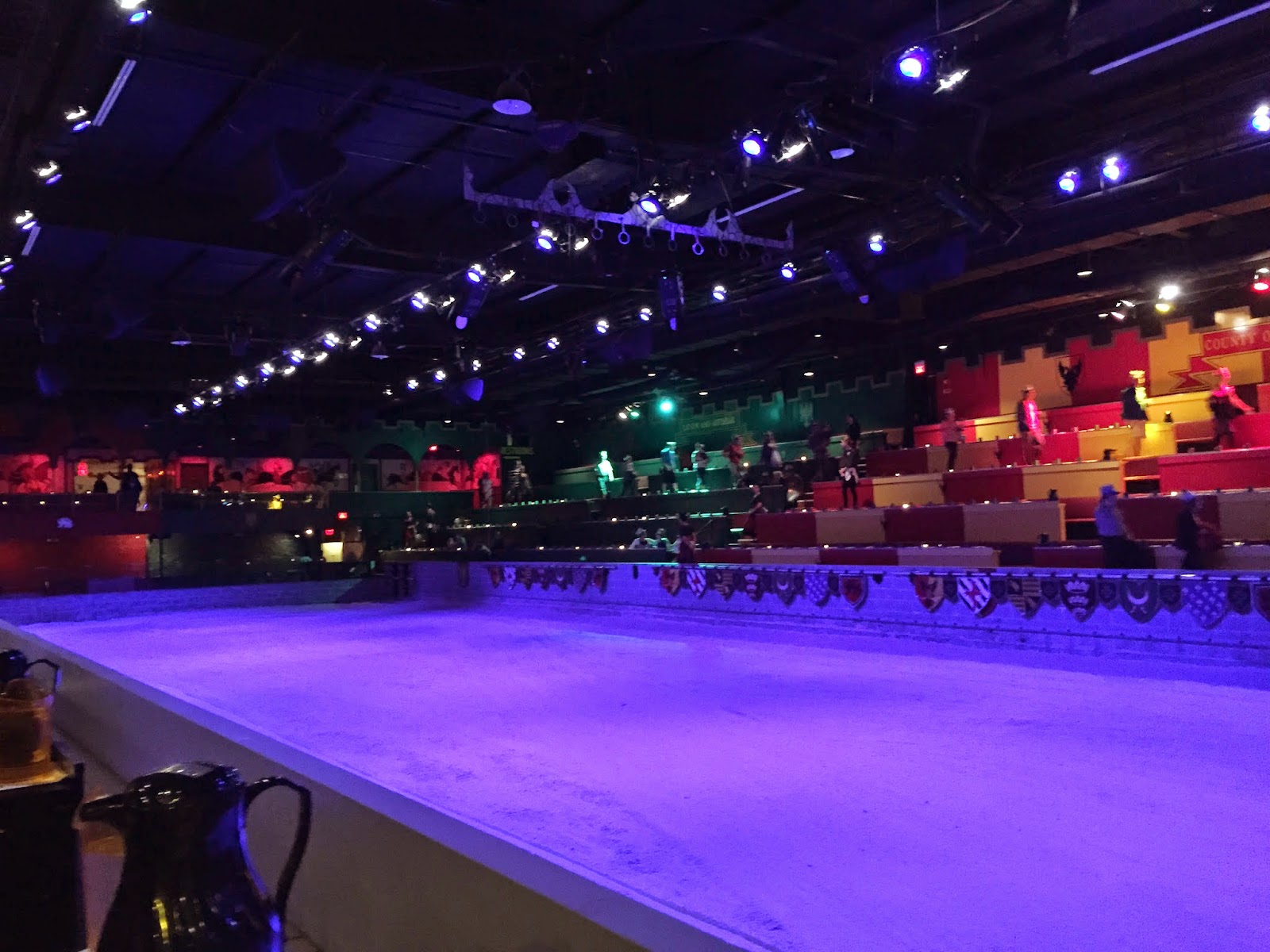 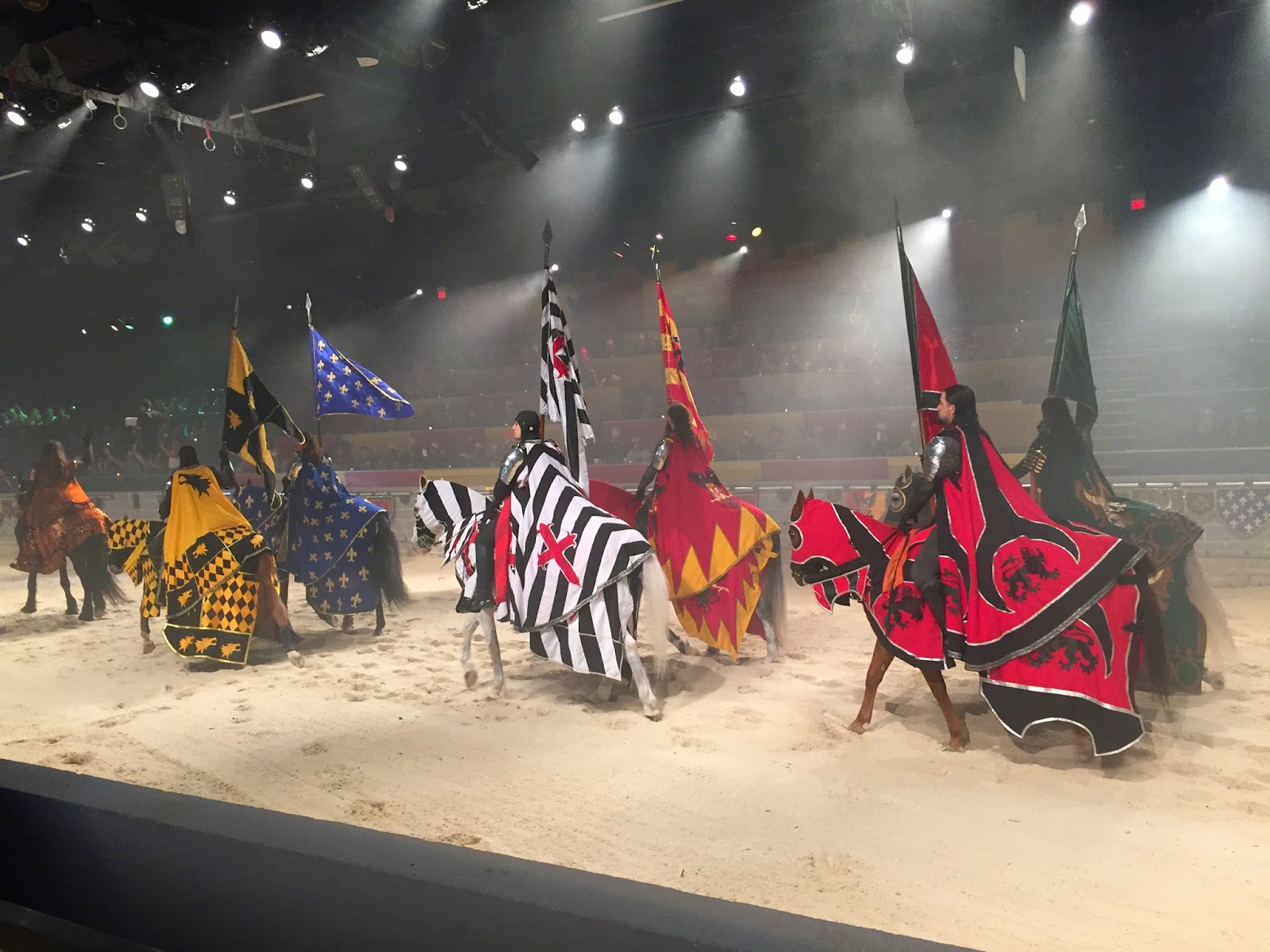 Andalusions and two QHs.  There were also two Friesians that would make appearances throughout the show. 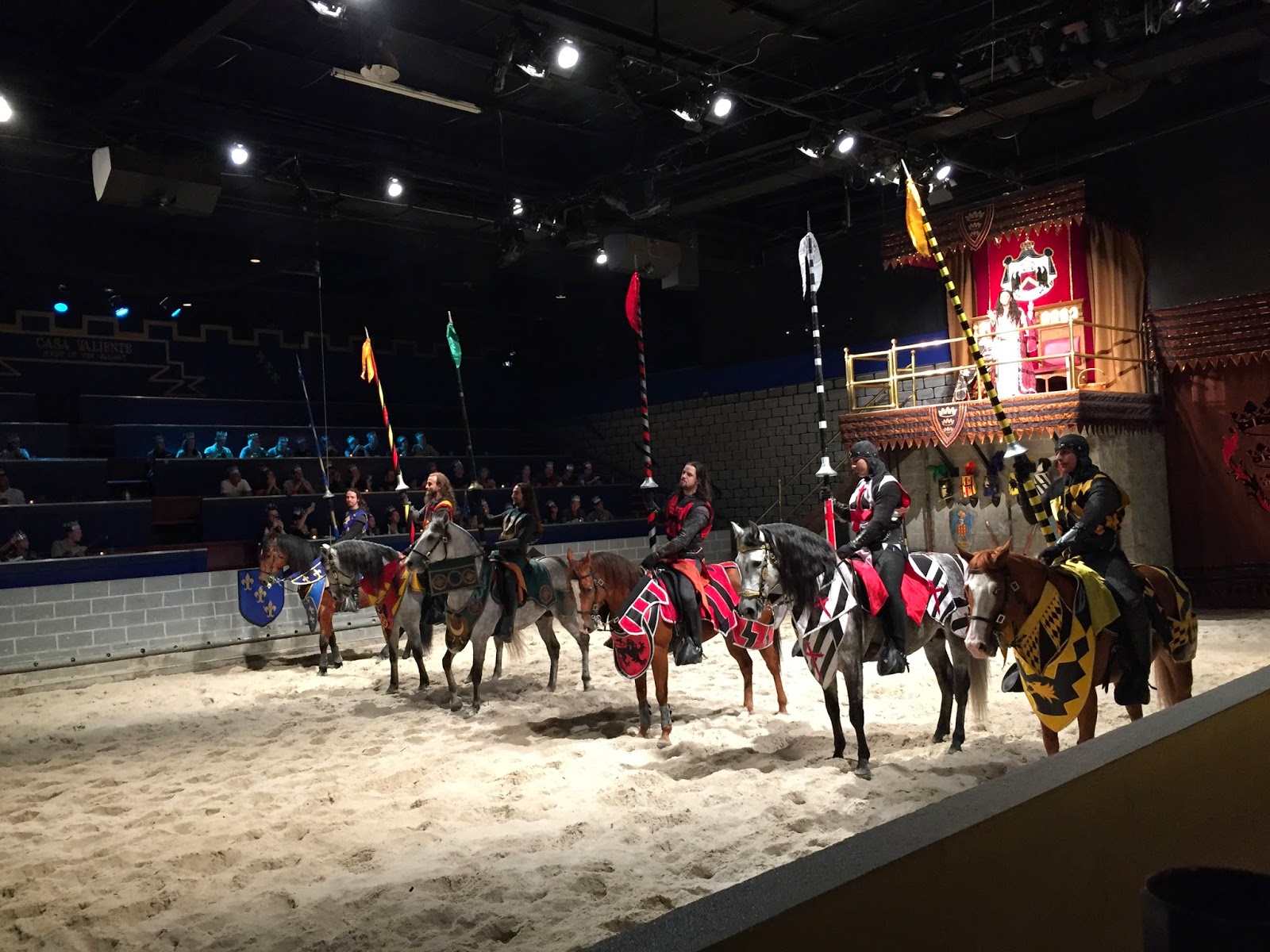 Somehow I won Queen of the Tournament and our yellow knight rode over and gave me the yellow ribbon on the end of the lance.

If you have never been to Medieval Times, and are near one, go.  But before you buy tickets, check Retail Me Not for awesome coupons.  The food isn't bad, but it's not great.  I really can't complain because they had a vegetarian meal so I was set.  You go for the show, not the fine dining. 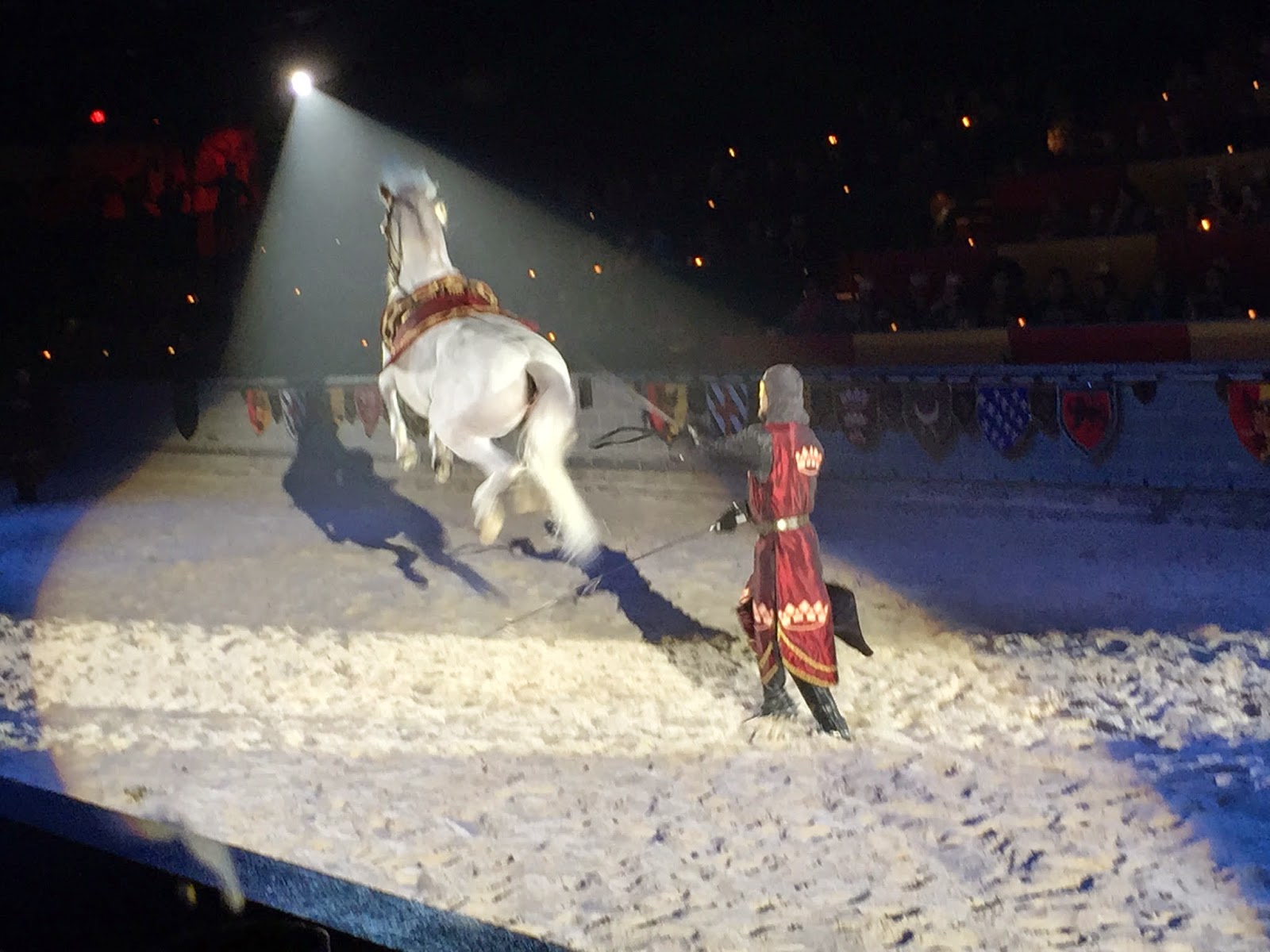 Part of the in hand demo.

First we stopped at the Tack Shack of Ocala.  At one point The Other Half came around a corner and asked "Did you see the Back on Track Stuff they have??"  Actually no, I hadn't.  I walked right by it to look at something else.  They had a bunch of their products, including no bows, which is on my want list, and he knows it.  He started asking "Well, which ones do you want??"  I said, the no bows.  Then he asked "Would you use them?"  Well hell yeah, I LOVE the Back on Track polos he bought me.  Then it was "Well, what sizes?"  A pair of 14" and a pair of 16" please and thank you.  Wait...was he taking notes for future reference?  Or was I about to get some Back on Track No Bows?  Then he reached down and grabbed a pair of 14" and a pair of 16" and said "Ok, let's go."  'Merica. 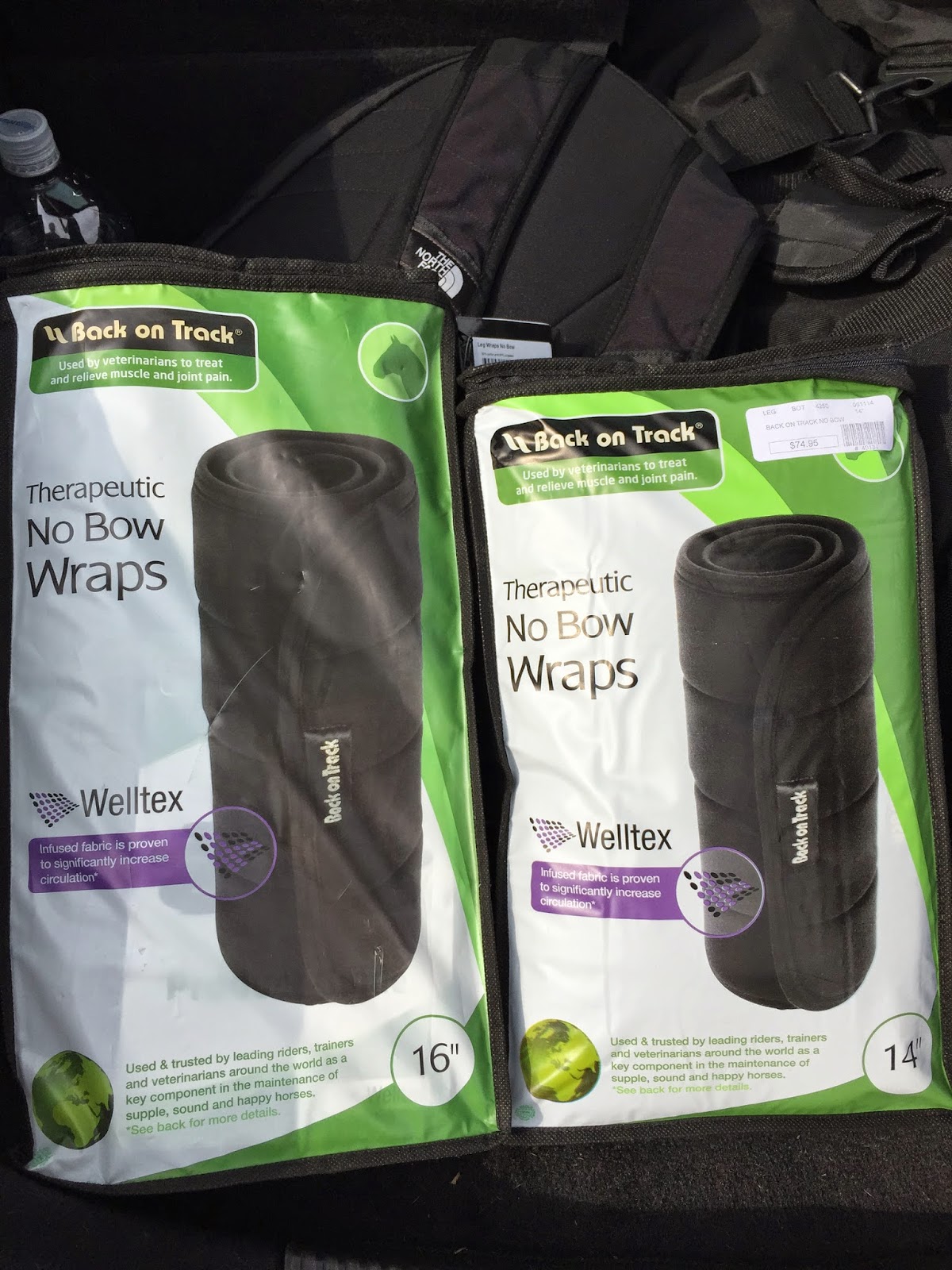 When we got in the car The Other Half said part of the reason he bought me the BOT No Bows is because he was hungry, borderline hangry, and the faster we got out of the store, the faster he got to eat.  Challenge accepted.  I will be sure to starve him before our next trip to the tack store.  But then he added that it was also because he loves me, and that...wait for it..."KLEIN IS A PRINCESS."  That's right.  He said it!!  He loves that horse, but he says I put her on a pedestal that grows higher every day, and she knows it.  Yeah, well...*crickets* the defense rests.  It's true.  But, those can also be used for Mochi too, the 14's atleast.  The 16's are just too big for her but the 14's will be ok for her back legs if we get back into serious work.  And of course if Wes ever needed them for any reason, after I clipped all his feather off, they would fit him too.

Seriously though, how awesome is The Other Half?  Be jealous.  Or just try taking your significant other to the tack store when they're hungry.  Make sure to drive right past some kind of place that sells food on your way too. 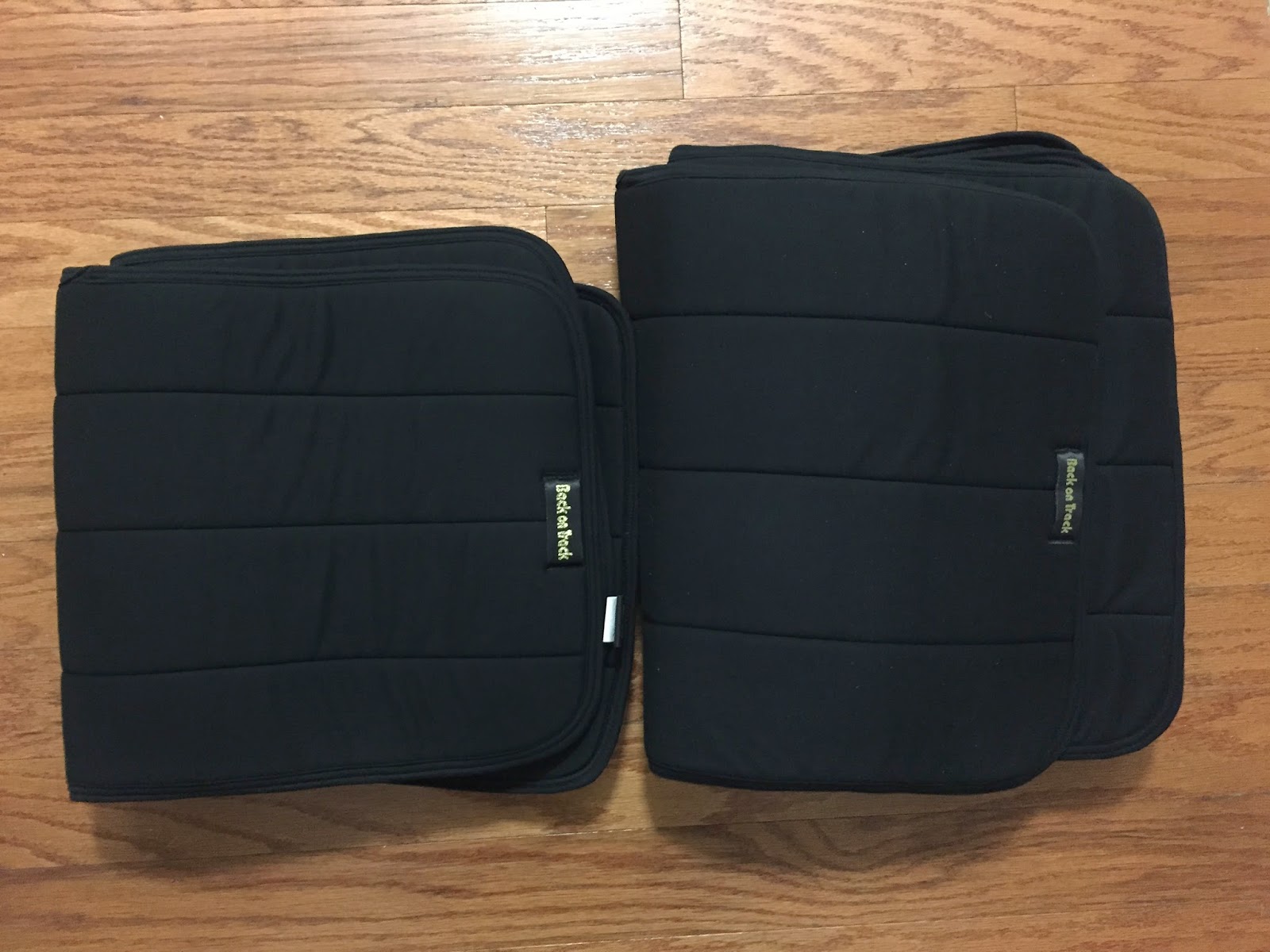 Nothing but luxury for pony legs right here!  They even come with a warning saying that they work SO well that the first few times you use them do not leave them on more than 2-3 hours.

I was also excited to find some Lucky Braids for Top Turnout shampoo at the Tack Shack.  I have been wanting to try her shampoo so I bought a bottle.  After the Tack Shack, we headed off to HITS Ocala. 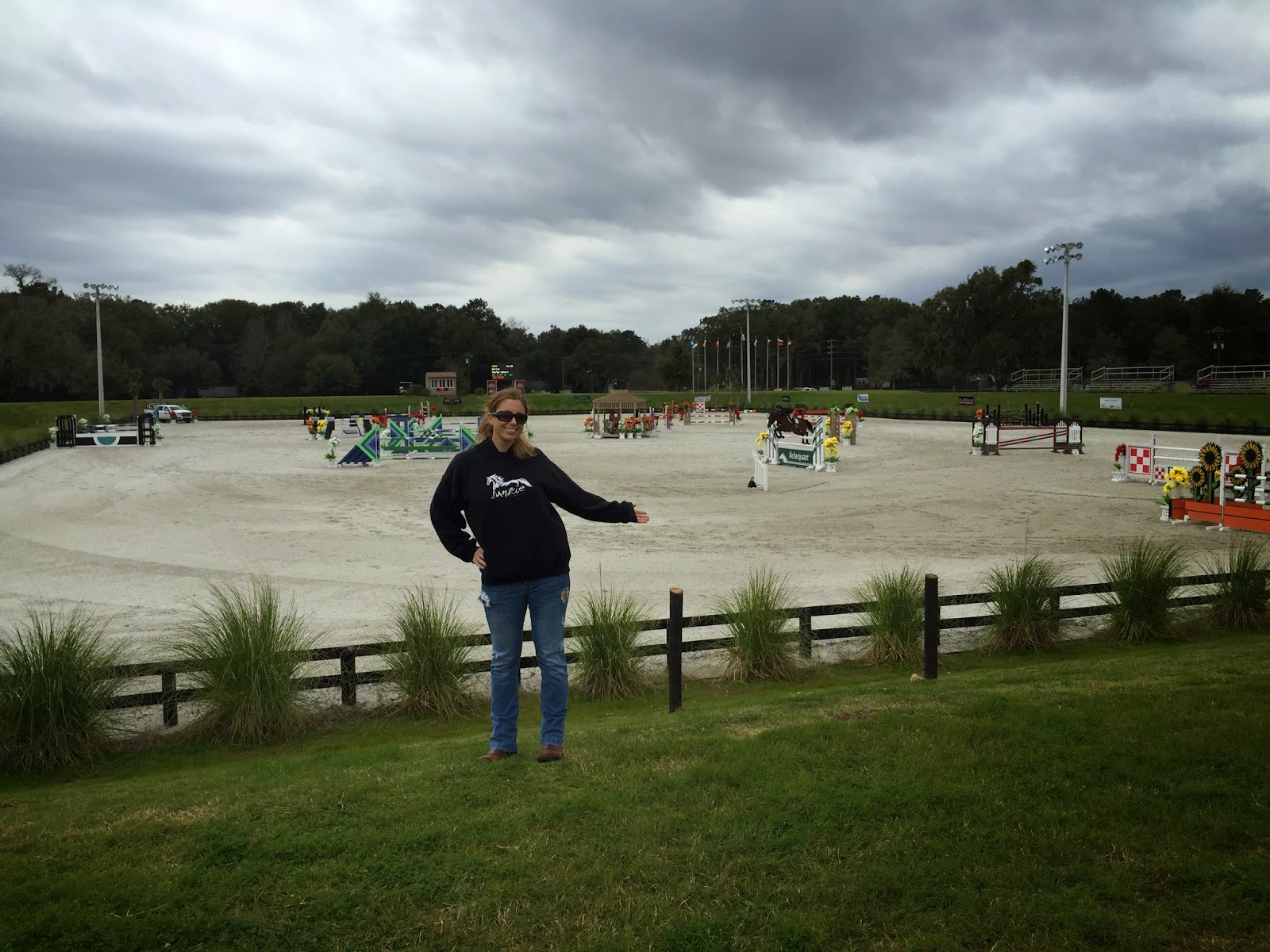 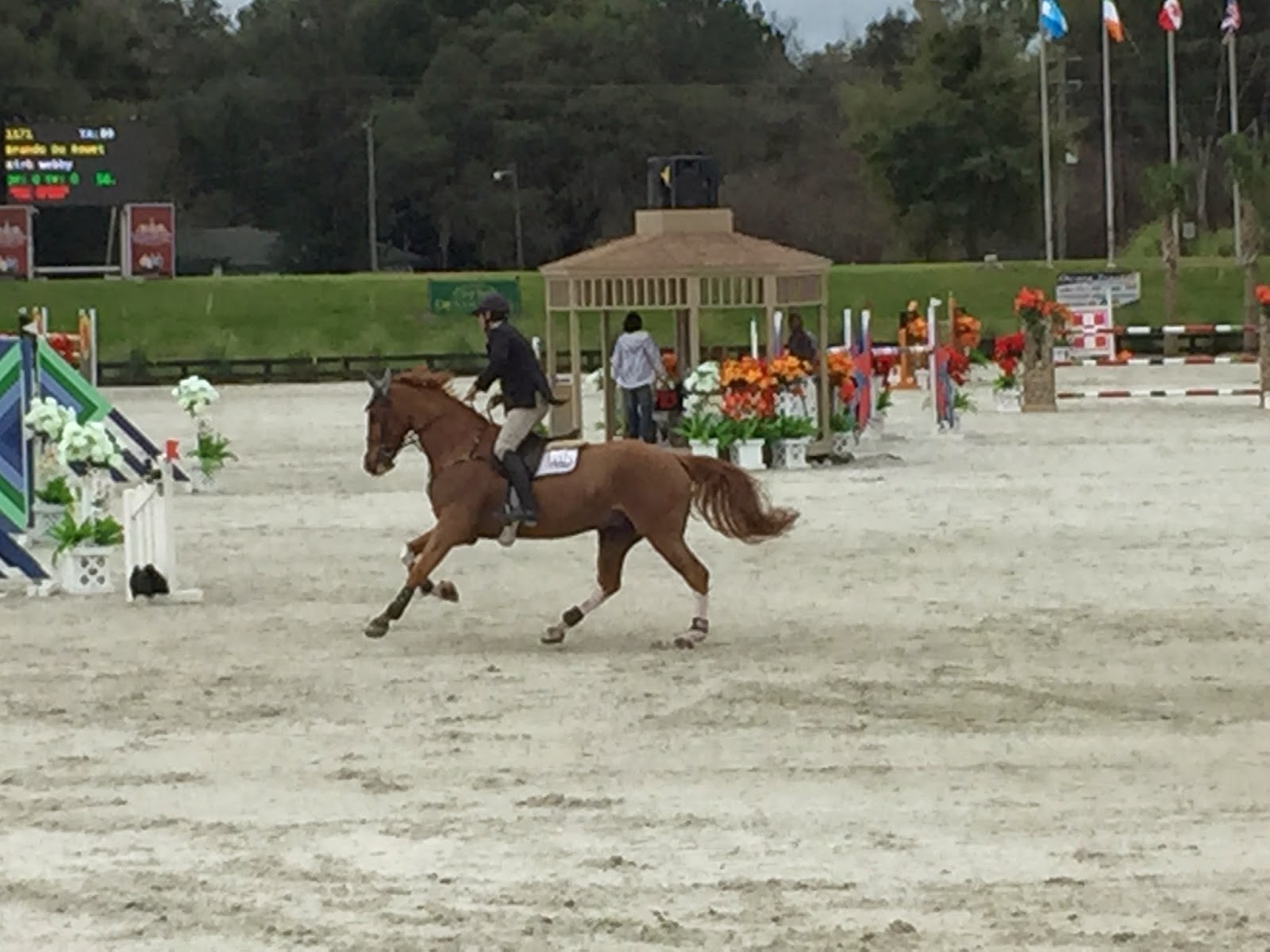 Brando du Rouet.  *Le Sigh* Du Rouet is the line the stallion I want to breed Klein to comes from.  My day at HITS was made when this guy came into the ring. 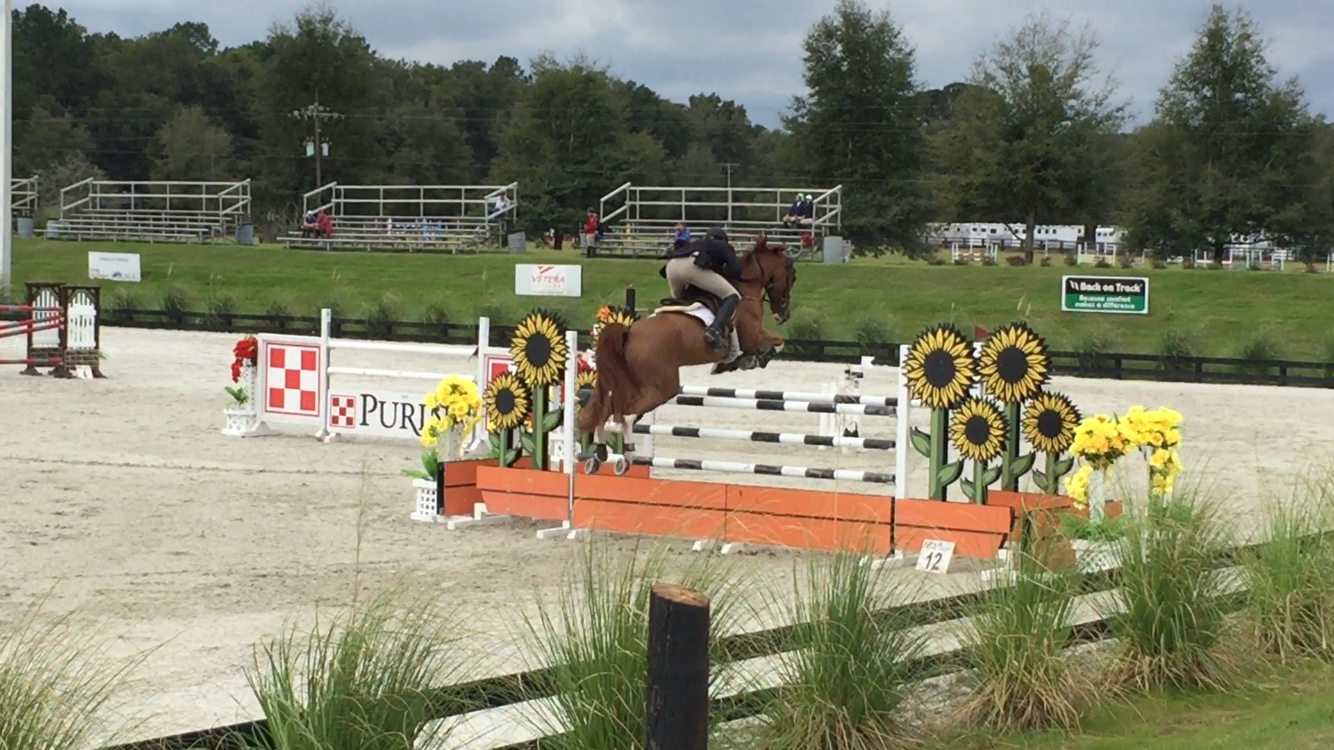 Posted by The Jumping Percheron at 8:41 PM