King Wes Has Been Crowned 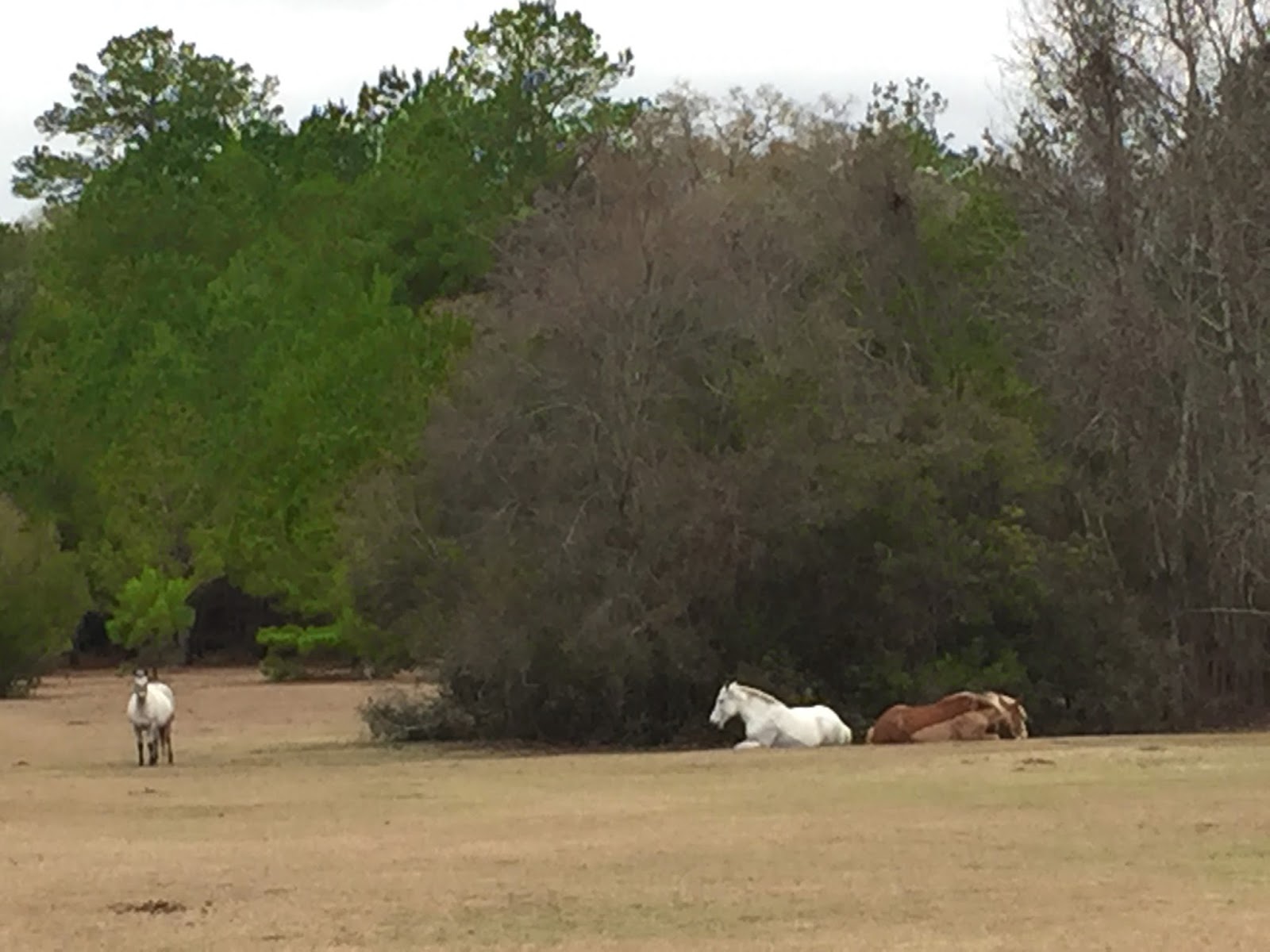 Klein and Wes napping, Mochs being the look out.

Something amazing happened last Saturday.  I have never caught Klein laying down napping and relaxing.  Eight years I have owned her and not ONCE have I ever seen her lay down to just relax.  I have seen Wes do it once, the day after he arrived from Utah last year.  He got in a about 3am and the next morning I let him out in the pasture and he layed flat out in the sun for a little bit.  That is the only time I have ever seen him lay down to relax, never in Utah.

Last Saturday we got to the barn and not only was Wes laying down napping, KLEIN was next to him!!  At first we actually got a little worried just because this isn't a habit for either of them.  I wanted to make sure one of them wasn't hurt and the other laid down next to them because they knew something was wrong.  Klein got up about 50ft before we got to them.  Wes stayed down.  He really looked like he was just woke up and was kind of like "Well, I WAS napping."  I made him get up just to make sure nothing really was wrong.  Next time I'll leave them alone.  Mochs was doing guard duty.  It was pretty funny.  The 14 hand pony was the look out for the 17 and 18 hand draft horses. 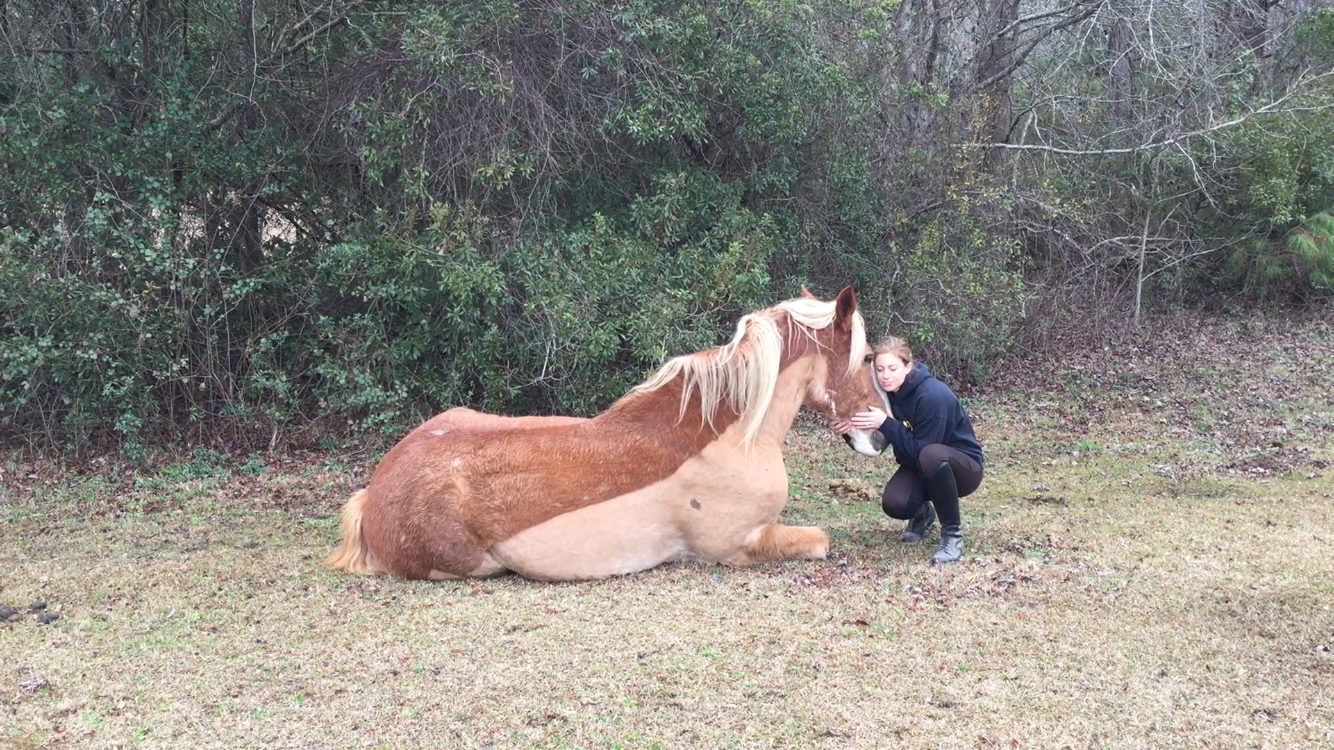 That just proves even more how much they love the new place.  They feel comfortable and safe and have 110% settled in.

They will remain in their little herd.  They will not be put in with the other four geldings on the property.  They have a fence that separates them and they do interact with each other but everyone is happy the way things are.  I have seen little signs the past couple weeks that Wes looks out for his girls and they look out for him.  Klein is the main indicator.  Ms. Antisocial herself actually answers Wes' calls.

Today the property owners were working on some fence line and their gelding that is the #1 man on the totem pole in their herd made a stealthy escape into the pasture where our three are.  He likes to run other horses around.  He finally met his match today.  I WISH I would have been there to see this.

The property owners told me that our three pretty much turned and went to town on him and had him running all over the place.  The girls were NOT about to let some random gelding tell them what to do.  Wes was the biggest surprise.  The girls, I would expect nothing less.  Wes...I've never seen him in this situation before.  Wes went on the defense of the girls.  He put himself between the girls and the other gelding and started pushing him around with his shoulder.  He pushed him around trees and through some brush.  Wes was letting him know those are HIS girls and he'll be DAMNED if anyone is going to bother them.

I couldn't stop laughing, it's funny because none of them were hurt.  I was completely floored by Wes' behavior.  I just have never known him to act like that.  But, then again in Utah he was in with a bunch of geldings.  At the previous barn he was also only in with geldings.

I think Wes has had flashbacks to his younger years.  I know he came from Creekside Belgians in Canada.  He is registered and they told me he was the lead horse on a hitch for them.  He also has the Tom Lane brand on his left shoulder. 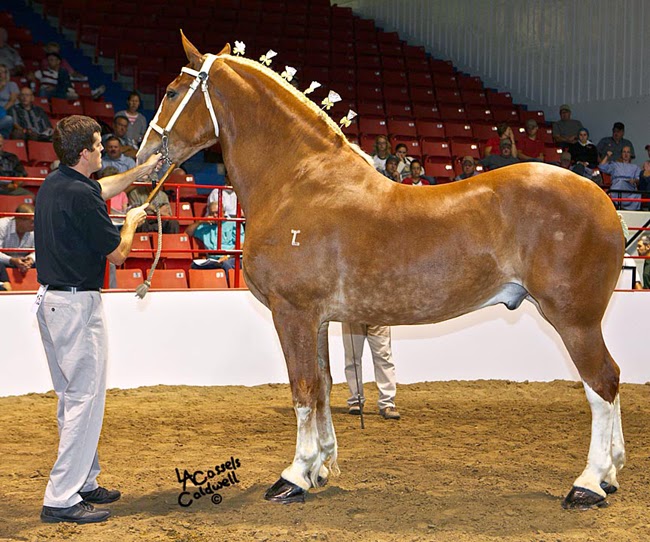 I have a STRONG suspicion he was gelded late.  I am 99% sure that is why he has a fallen crest.  When Moch went into heat at our previous barn it was clear Wes knew EXACTLY what she wanted.  The first time I put the three of them in together in a pasture just to meet each other Moch went into hussy mode.  The majority of geldings I have seen usually just kind of look puzzled when mares in heat are around.  Like they know the mare wants something but they have no idea what it is or how to do it.  Wes started nickering really soft to Moch, nuzzling her, and following her around like he was thinking about mounting her.  That's when I came running out yelling and put Moch back in the mare pasture.  Wes knows what to do.  I'm pretty sure he has babies somewhere.

Thankfully that was the first time I have ever seen Mochs go into heat and Klein has come into heat once since we've been here, almost two years ago.  It doesn't happen often.  I'm not really worried that will happen again.  She also couldn't care less about the other four geldings.  She was pretty nasty to them every time she walked by their fence for the first week.  She would make UGLY faces and now she just ignores them.  We have went on a hack a couple of times with one of them, an Appy too, and she acts like he isn't there.  I guess spotted horses have no unspoken code.

Last week while I was tacking up Klein Wes was standing at the fence, leaned over and did his little soft nicker to her.  She completey ignored him but I wondered what he was talking about.  I think he has taken on a new role in life, herd stallion gelding.  The funny thing is, as soon as the property owners caught their horse and put him back in his pasture Wes' switch flipped off and Klein went back to being the boss.  Though Wes did stand and just stare toward the gelding pasture, making sure to put himself between the pasture fence and the girls, while the girls were grazing after that incident.  I think he just leveled up in life.  Not only is he living the retirement dream, now he has a job to do.
Posted by The Jumping Percheron at 10:20 PM

Email ThisBlogThis!Share to TwitterShare to FacebookShare to Pinterest
Labels: Wes