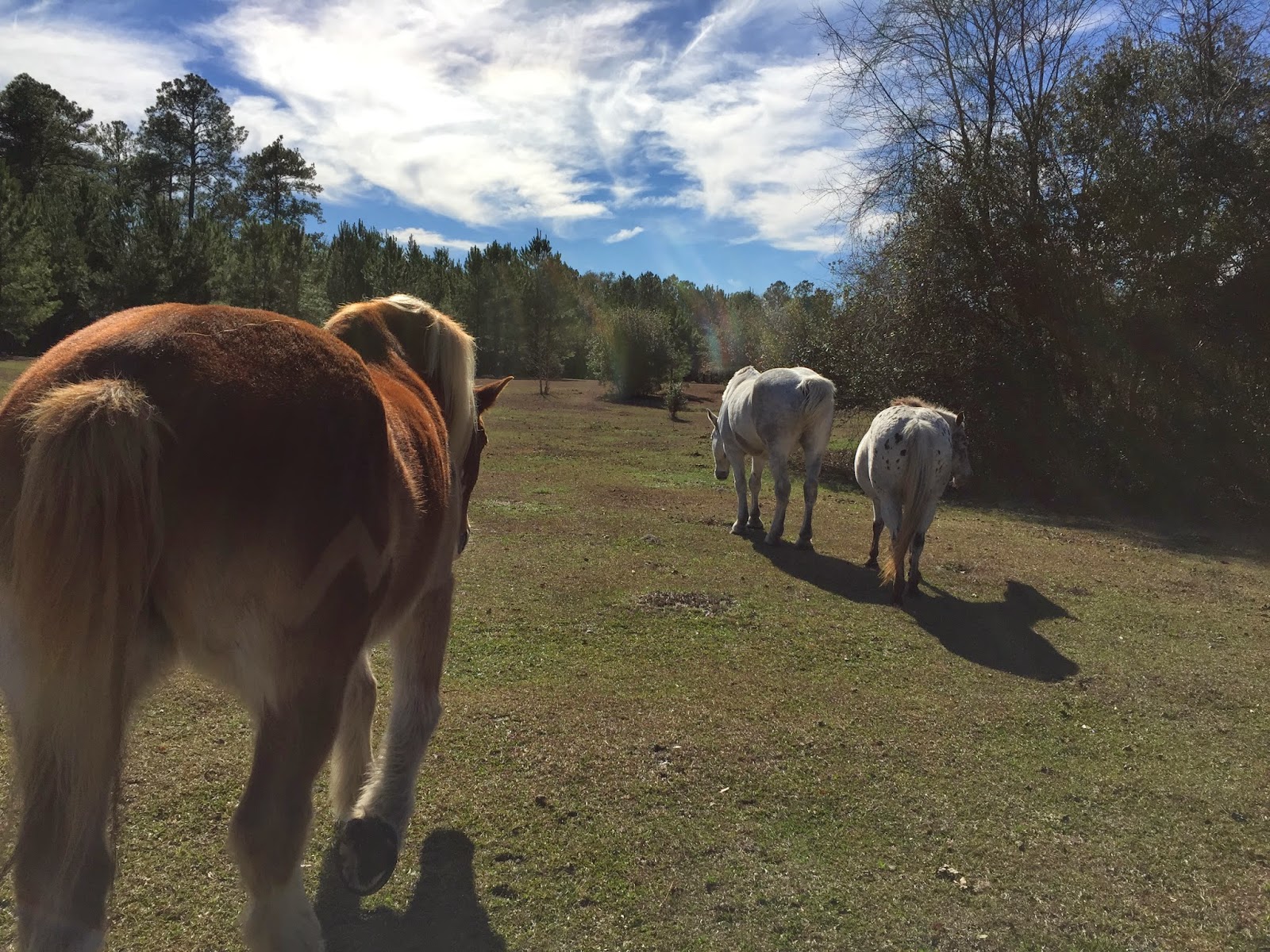 The deck constantly shuffles as far as who leads on their adventures.

The ponyfaces have been at the new barn for a week now and they are settling in just fine.  I have ridden Klein and Mochi both on and off the property.  I have been spending my lunch hour every day with them too, in addition to going to the barn after work to ride.  In New Mexico, the barn was only five minutes from work and home.  I missed that, now I have it back, and it is so, so, so nice.  I love doing self care again too.  I would much rather take care of them myself than have a babysitter do it for me with full care.  For me, part of the enjoyment of owning them comes from taking care of them, not just riding.

It has been hit or miss, literally, with the four other horses, all geldings, on the property.  Mochi is the only one that has her mind completely made up that as of right now, she is NOT interested in being friends.  She makes that perfectly clear when she walks by and she has yet to sniff anybody.  Klein is undecided, and so is Wes.  Klein will be nice and sniff and not squeal or anything, then the next time she walks by them with her ears pinned. 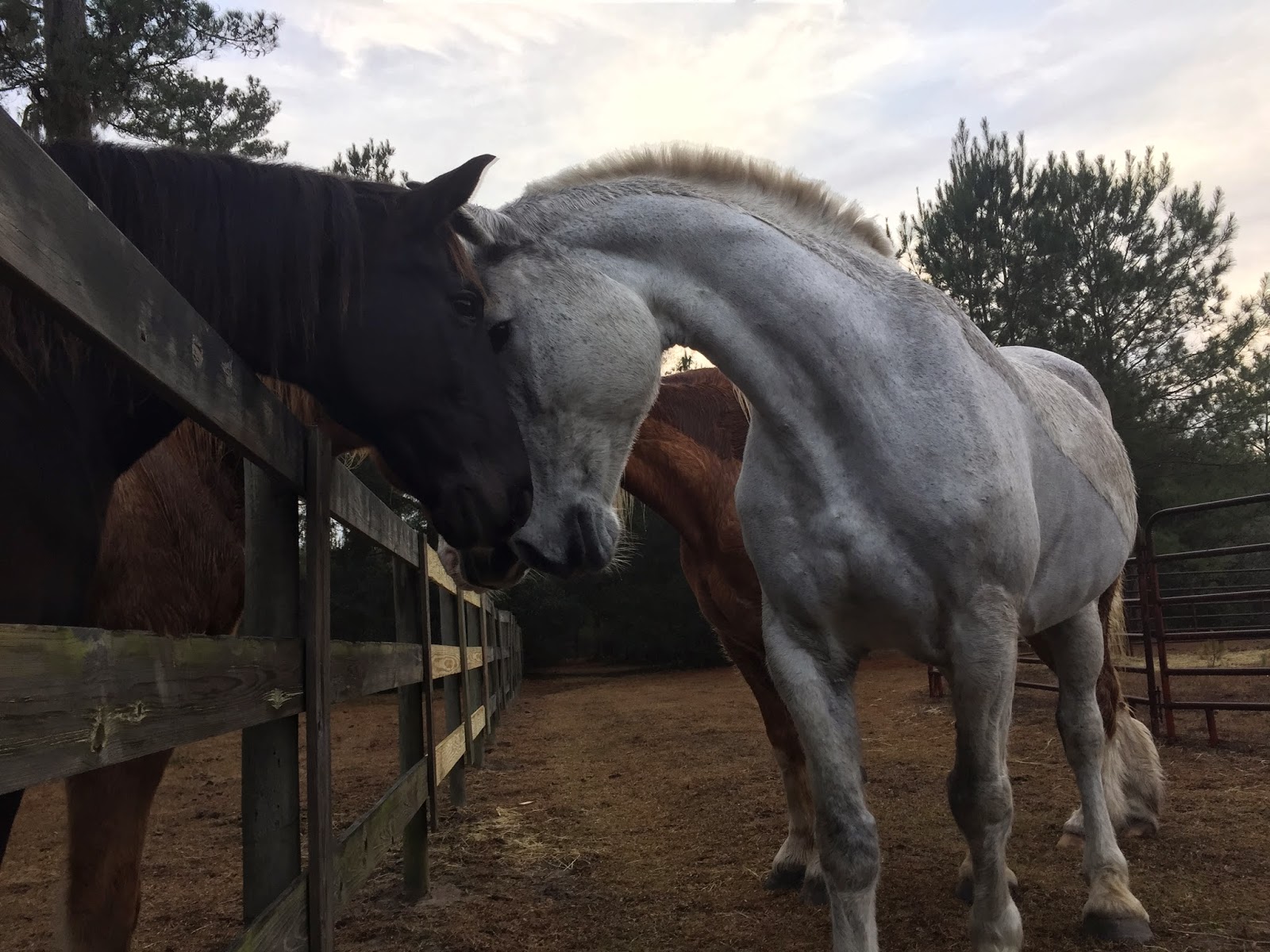 Klein and Wes minding their manners.

Wes will sniff them and walk off from them completely indifferent.  Other times he'll strike out, not at the other horses, and squeal.  He is finally gaining a little confidence in himself.  In Utah I remember him always being the lowest man on the totem pole.  He was in with about 20 other full drafts though.  Now he really is the big fish in the pond and I think he is finally starting to realize that.  He never kicks at anyone or does much beyond making a bunch of noise.  That is only really with the alpha from the geldings too.  The alpha is a Belgian cross, ironically.  Still, a draft cross is not a draft and Wes has him by hundreds of pounds and atleast a full hand in height, maybe a little more.


I remember how ugly the girls were to Wes when he first came home.  Moch would paw like a little bull and charge him.  She'd kick out at him but never make contact.  Wes would just stand there, never pinning his ears or acknowledging any of her attitude.  Now look at them... 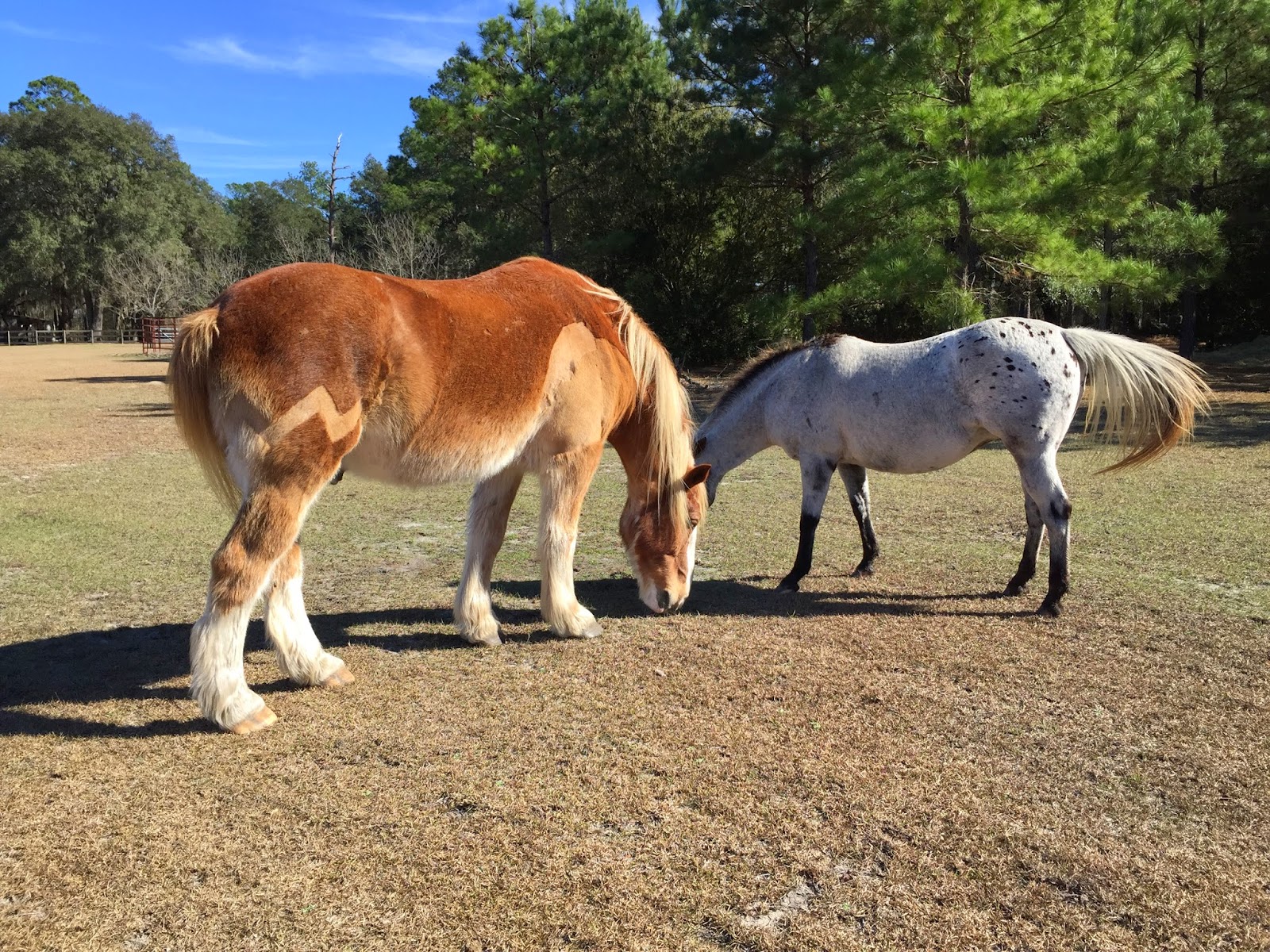 It might take a month or two, but everyone will be just fine.  Klein was exceptionally rude to Wes when he first came home.  She wasn't as bad as Moch, but she was close. She would pin her ears at him and swing her hip toward him.  Now look at them... 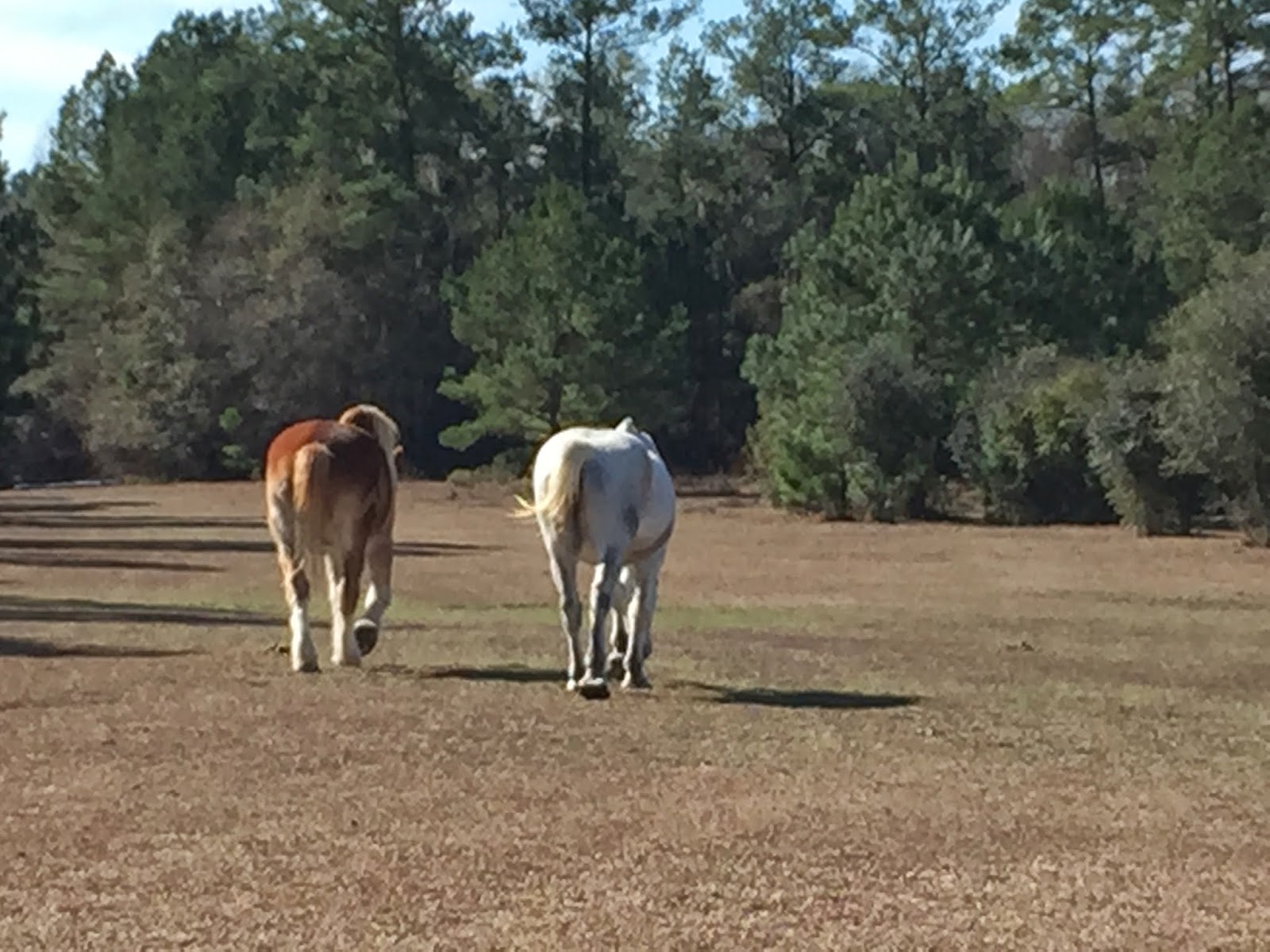 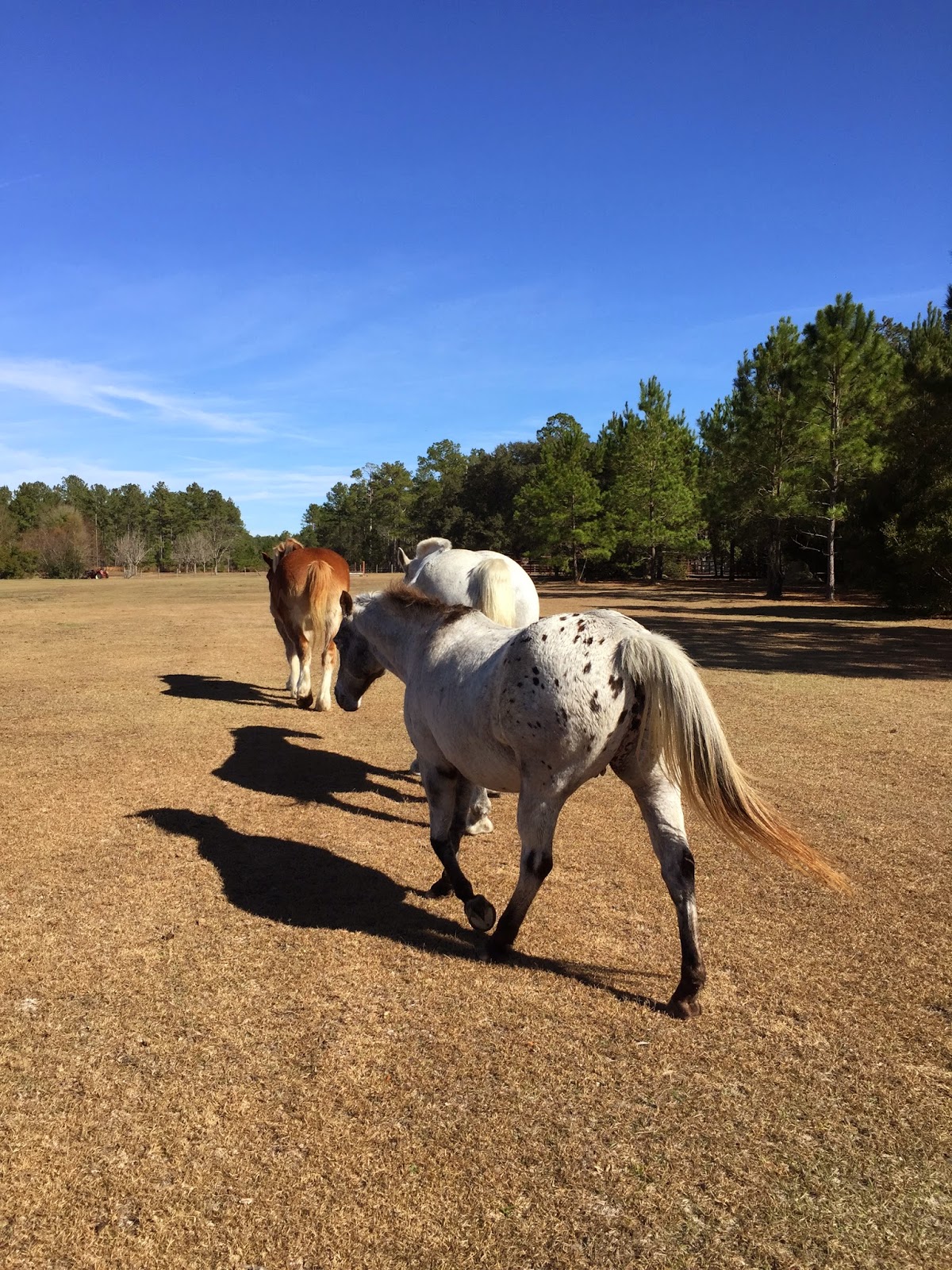 And the three of them, one happy little herd now.

The funniest part is when I took Wes for a walk yesterday evening the girls started running around like crazy!  Klein never cares very much about anyone leaving, she has never been very codependent, and I think Mochi had her stirred up over Wes.  They used to hate him!  Mochi gets upset when Klein leaves too.  I rode Klein off the property and both of them were whinnying for her.  She answered them once or twice, which was surprising.  But beyond that you would have no idea she gave any f's about leaving them.  Then yesterday I took Moch off the property and she never made a peep!  Wes whinnied for her, Klein didn't.  Moch never responded.  Once they get completely settled in, all of that will stop too.  It will sink in that the new place is home and that they belong there. 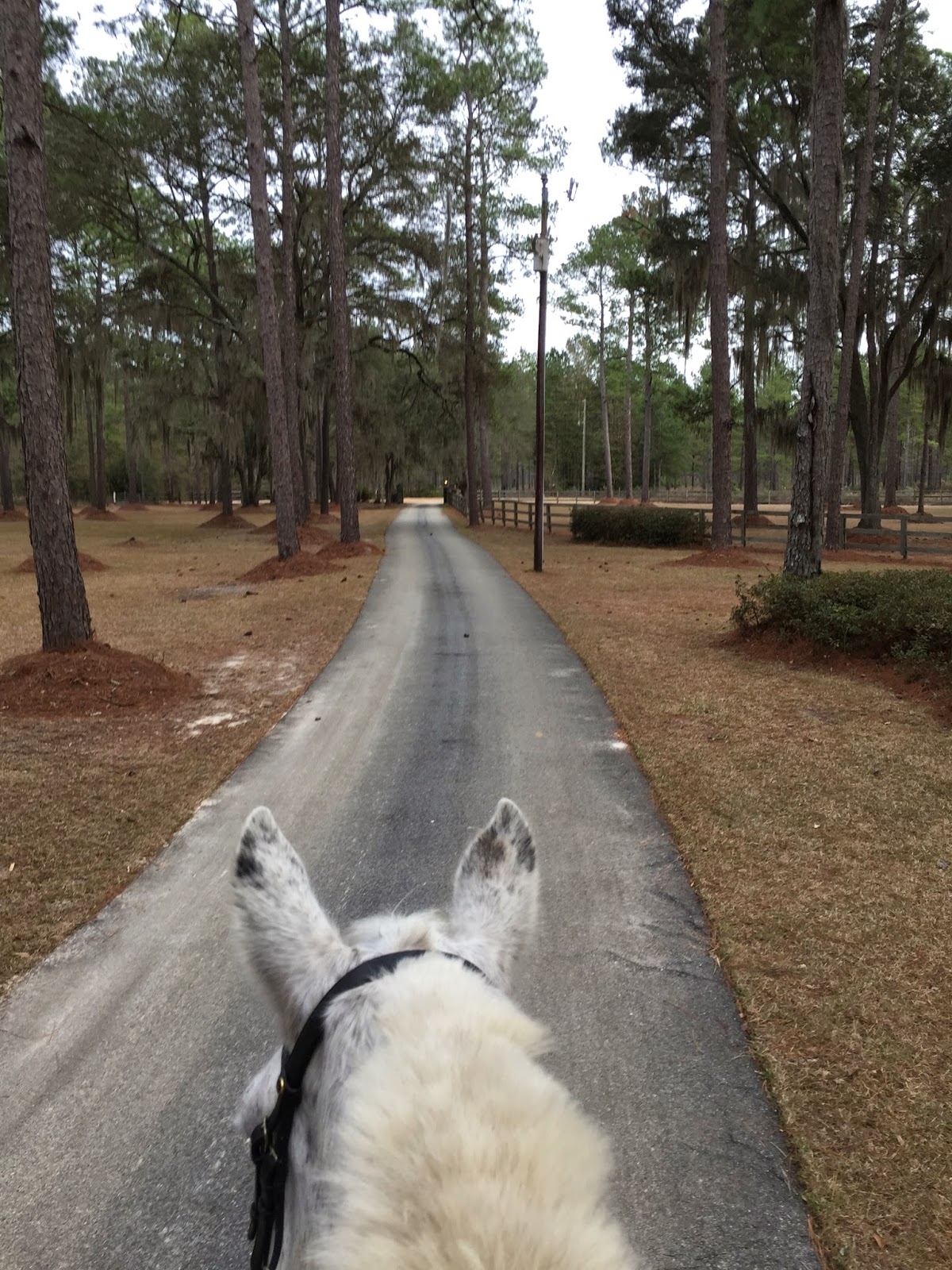 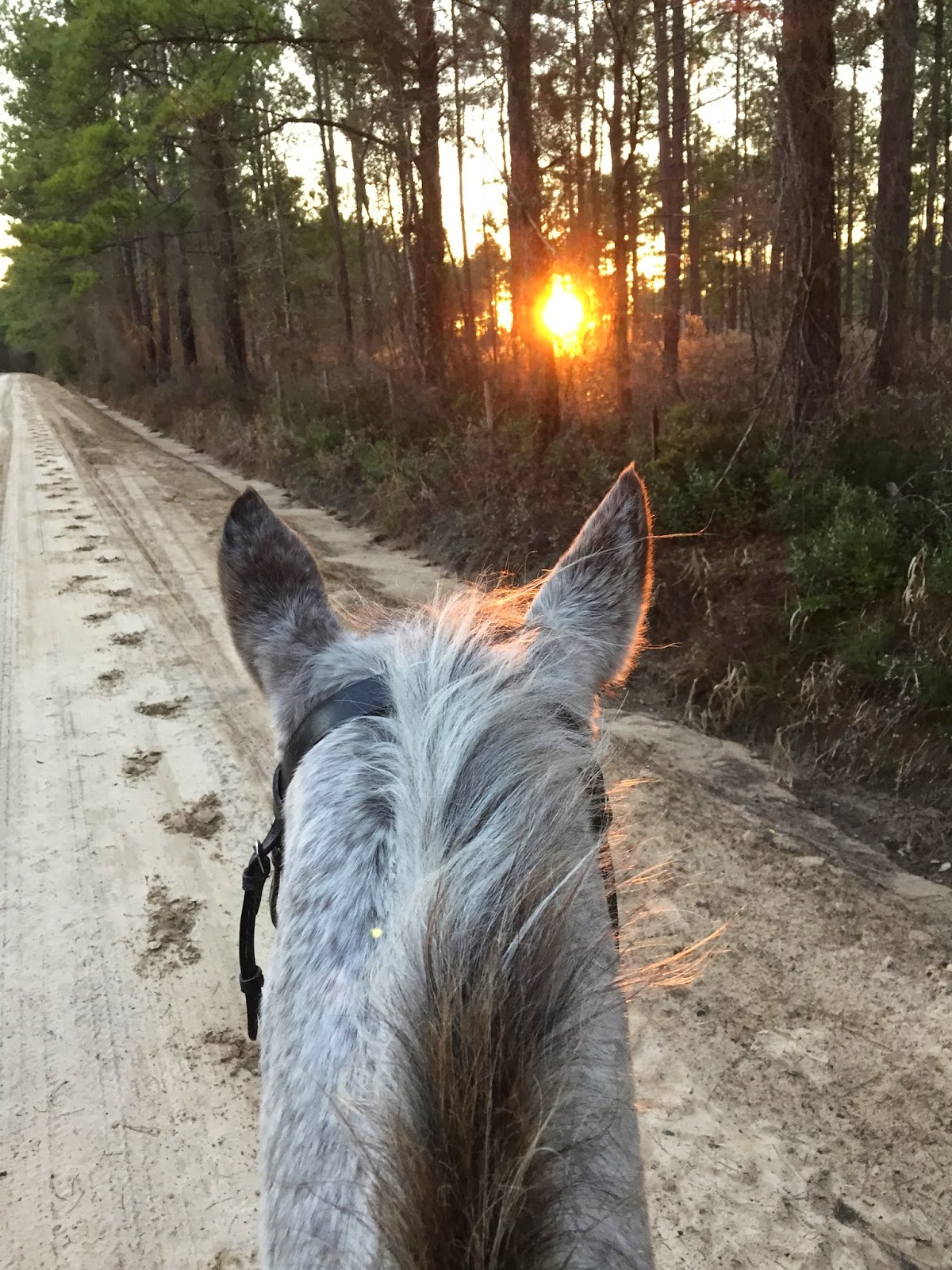 Wes is having a hard time leaving the girls right now.  He is fine heading away from them but as soon as I turned him around and he could see the girls running around he was a handful.  Thankfully, his nearly 2,000lb self listens to me.  It's really not his fault though.  Sure, he was a carriage horse in a down town area for eight years but where he lives now is completely foreign to him.  It's a 180 from living downtown.  Plus, he was walked a very, very short distance to the barn where they were harnessed up.  So really, I need to go over the basics with him in the round pen of halt when I stop walking, back up when I take a step back, etc...  No one has had him do anything like that in over ten years.  Then I think back to when he first got to the barn in Salt Lake, and he was exactly the way he's acting right now about leaving the girls.  Eventually, he got over that, obviously.  I remember ground driving him off the barn property and through an adjacent parking lot, almost having to jog to keep up with his strides.  I remember being incredibly thankful he listened to the little human that was about 1/20th of his size.  I remember taking him out for his first night on the street.  That was honestly probably the most nerve wracking experience of my life because there were literally millions of variables.  In the end, I know this horse.  Repetition, patience, and time will teach an old dog new tricks.

Besides going off the property Klein and I worked on dressage.  In moving barns I have cleaned pretty much everything I own and found some surprises here and there, like Klein's german silver french-link snaffle.  It has been a couple years at least since we have used it.  I had to try it out.  There really isn't much difference between how she goes in it versus her baucher I normally ride her in.  That first ride with it made me smile.  I remember how she used to completely flip me the bird in that bit and run through it like a freight train. 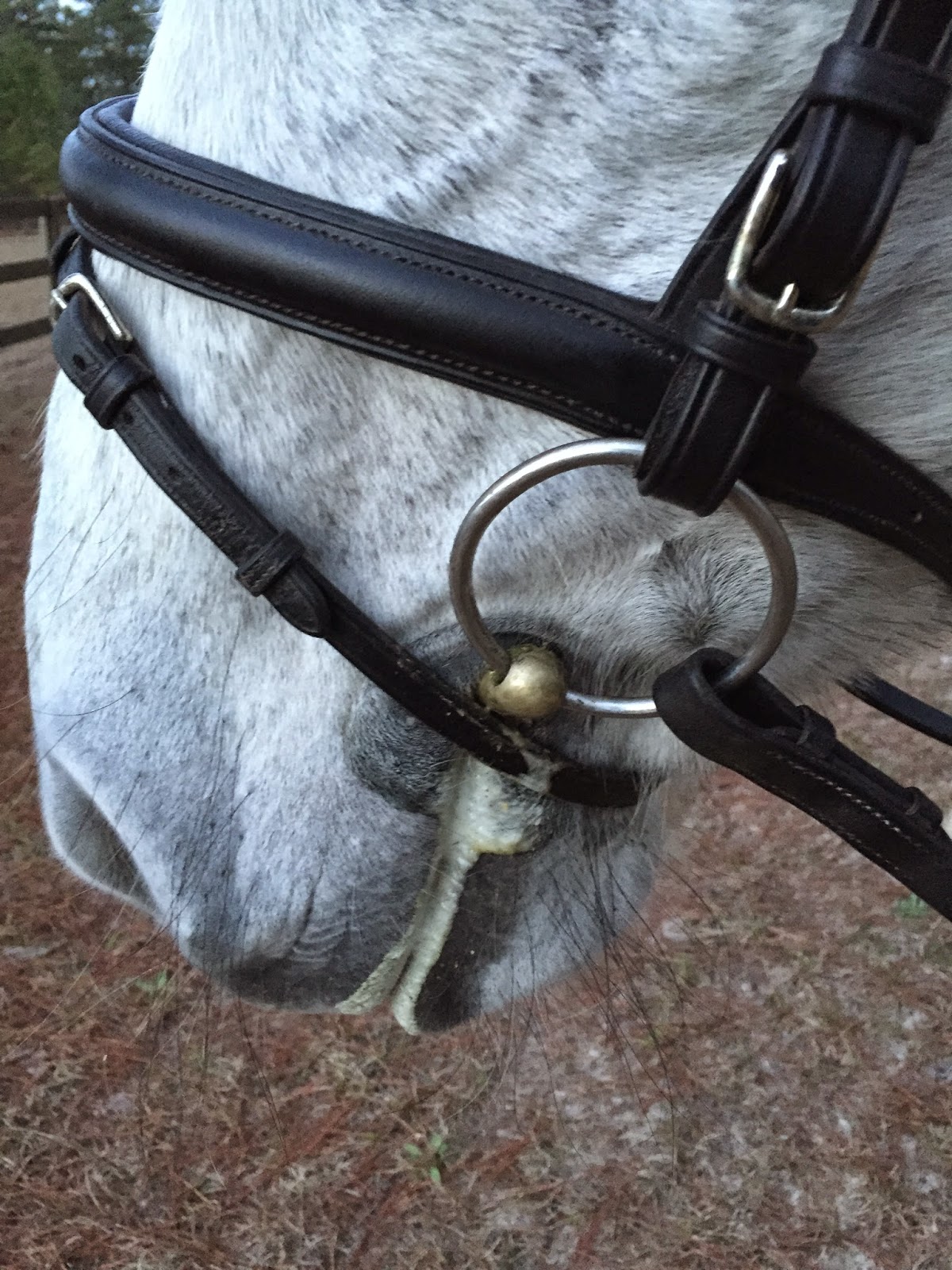 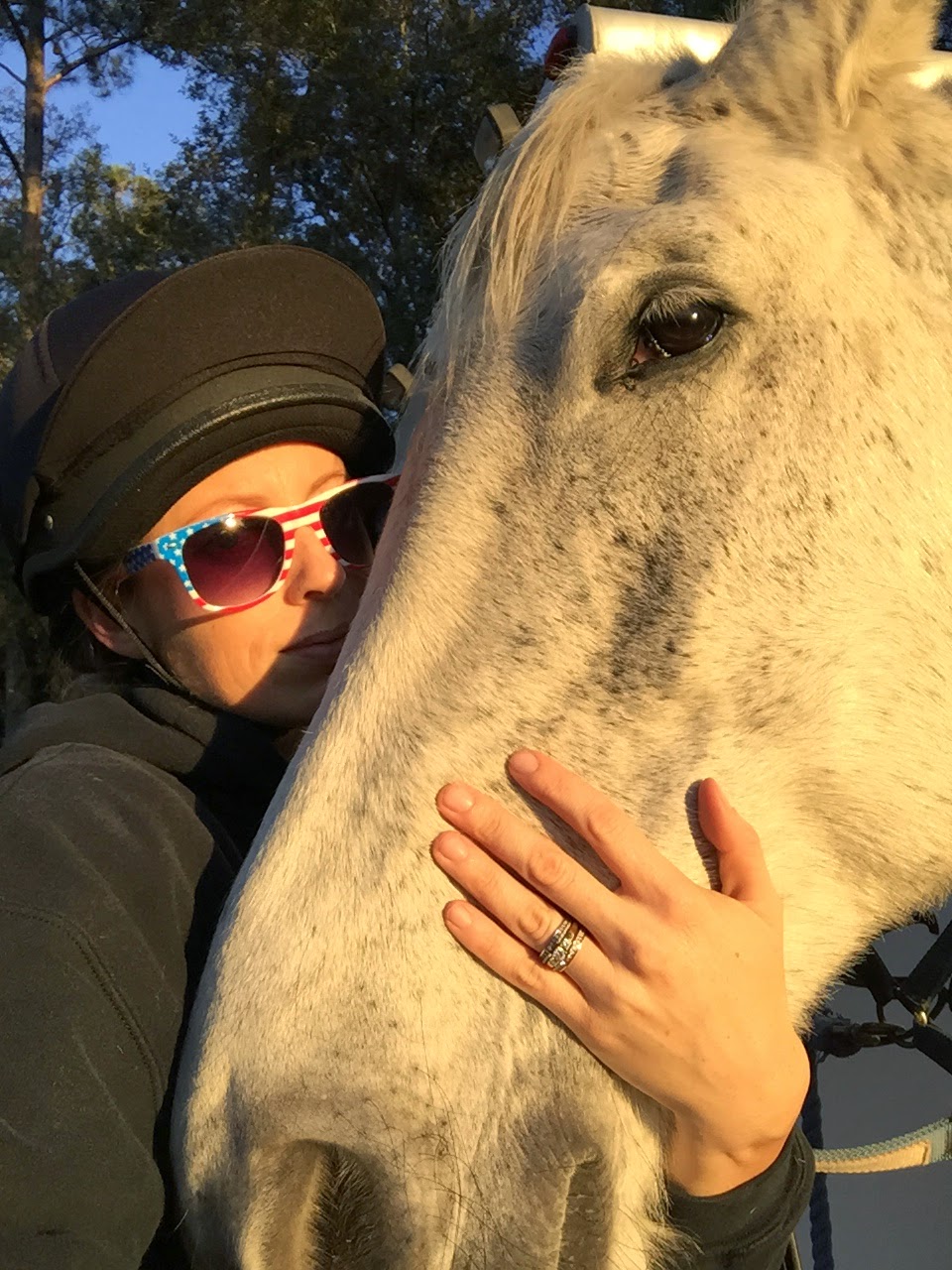 Klein wanted cuddles before our dressage ride.  She will rest her head on me and just hold there when she wants cuddles.  Pretty adorable. 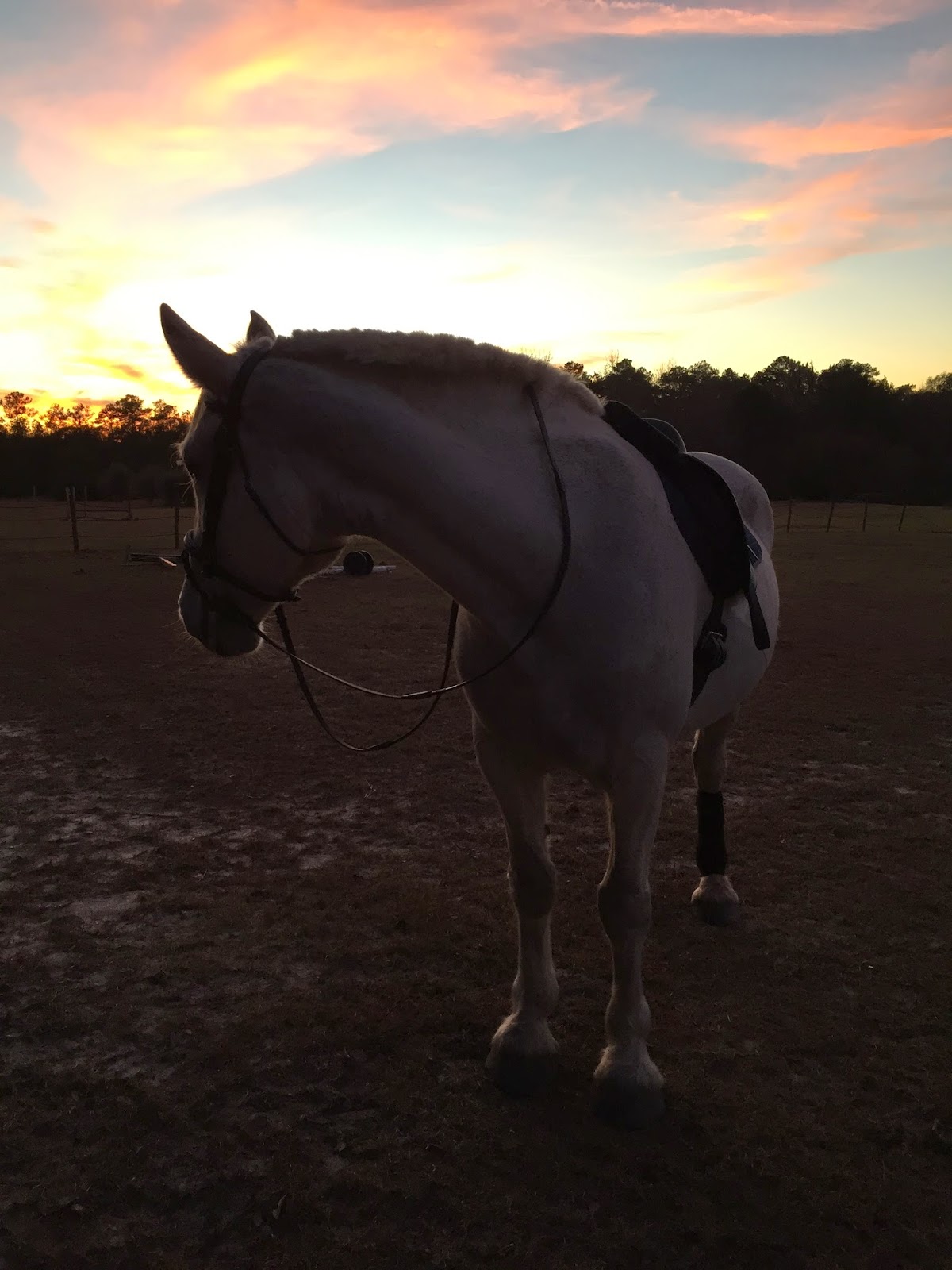 Beautiful sunset at the end of our ride.

Some pics of our lunch time shenanigans: 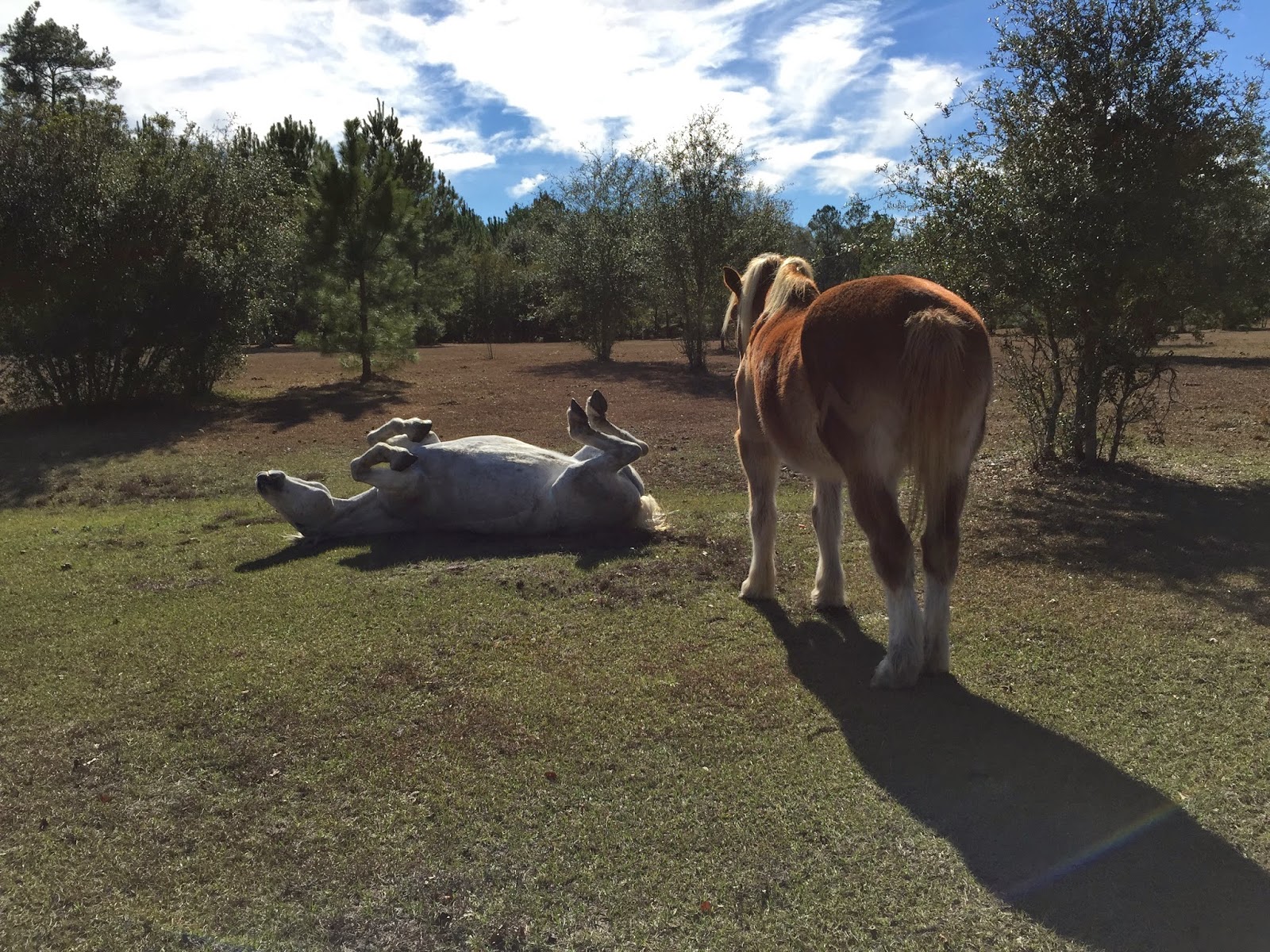 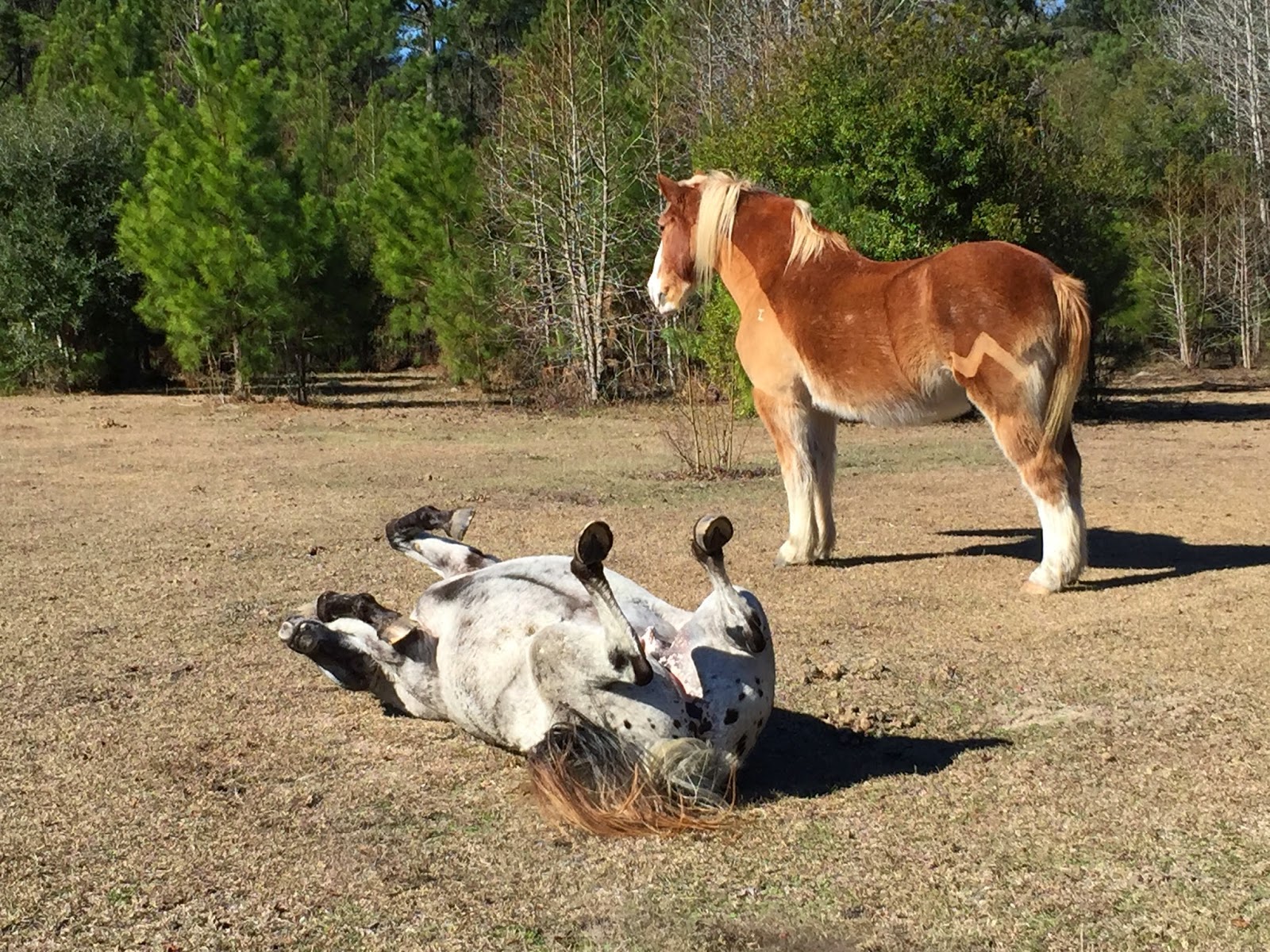 Moch copying Klein today at lunch the next day.  Wes pretending he doesn't know her.
Posted by The Jumping Percheron at 9:46 PM