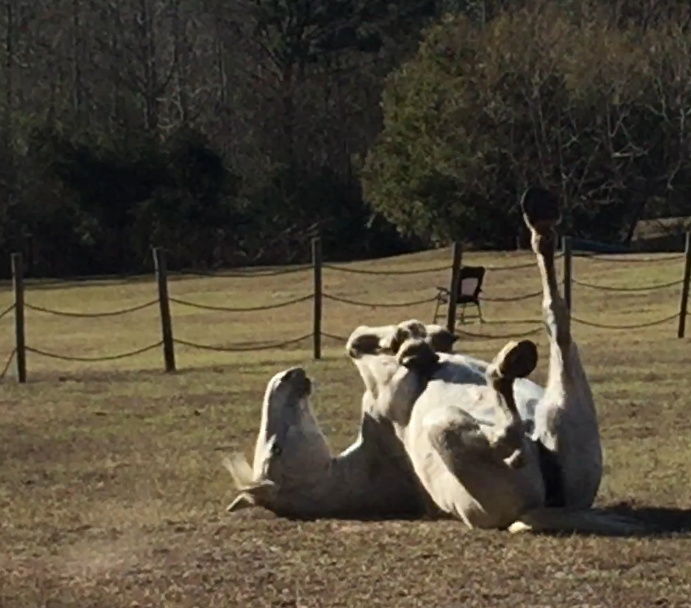 Somewhere I forgot to mention that last weekend we went out on the trails at the new place for the first time and it was.........completely amazing.  There are miles and miles and miles, like 20+ miles of trails next to the barn.  All of it is wide, groomed trails.  It is a dream come true for conditioning. 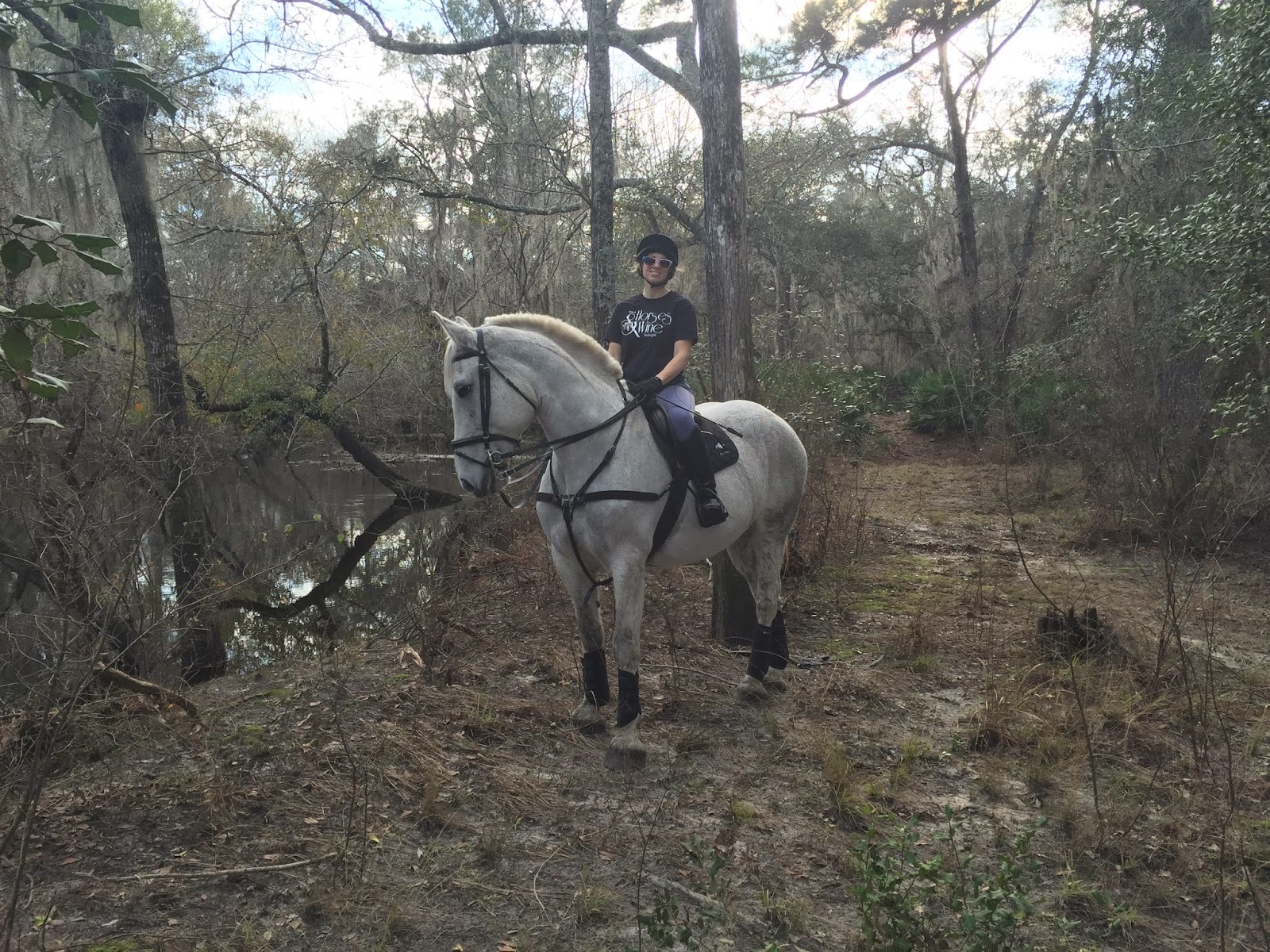 This was a little part that branched off to go down to the river. 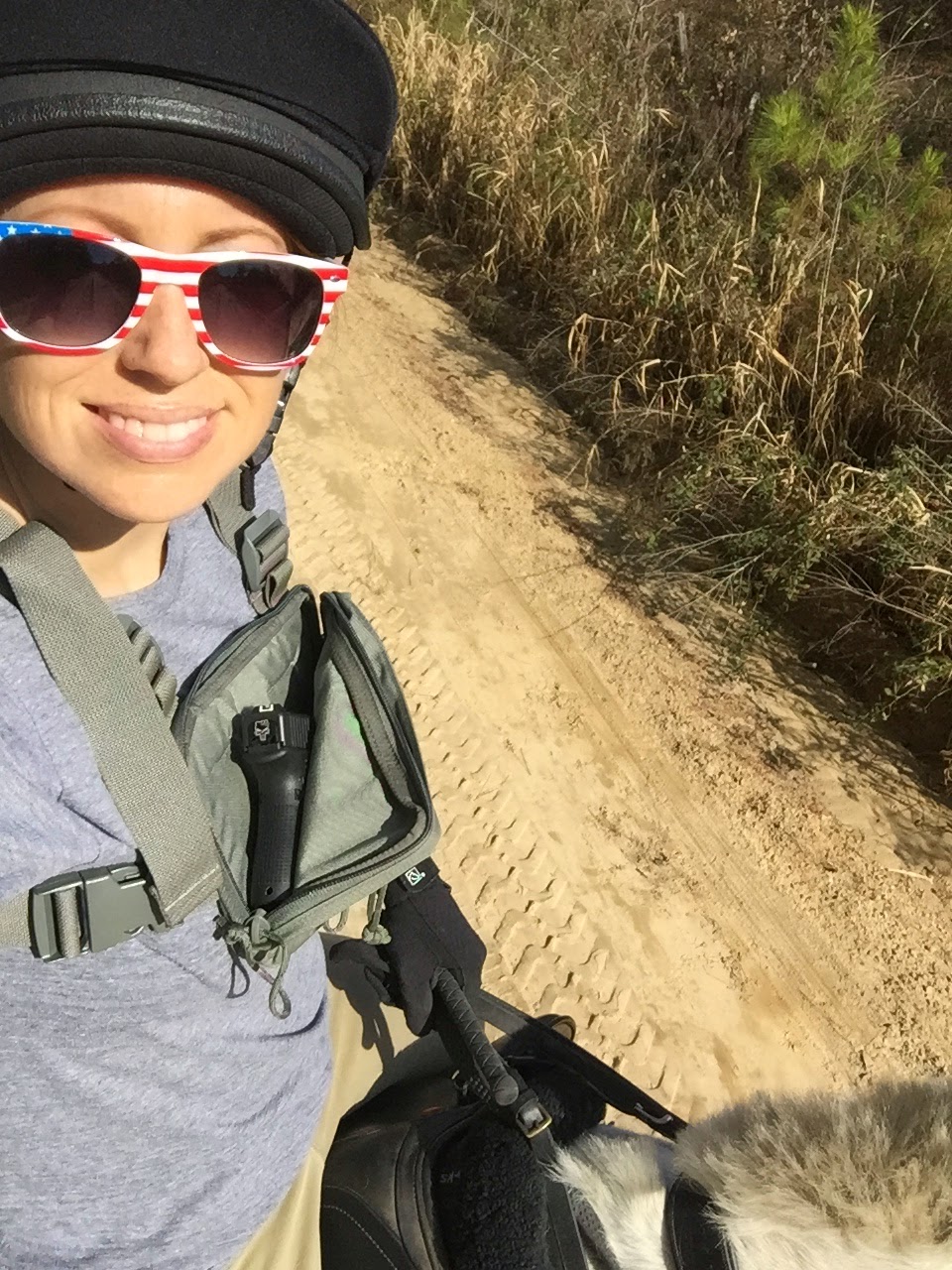 Aww YEAH.  I still am completely in love and 150% satisfied with my HPG Kit Bag.  Never leave home without it!  Before anyone says anything, no, I don't ride with my .40 hanging half way out, that was just to show how it fits in the bag.  It has two pull tab zippers that you can set where ever you want, so it works no matter which hand you draw with.

We have discovered that Wes has taken up aqua aerobics.  The other day he came walking in and I could tell he had just rolled.  I thought he had rolled in mud until he got closer and from his belly down was DRIPPING. 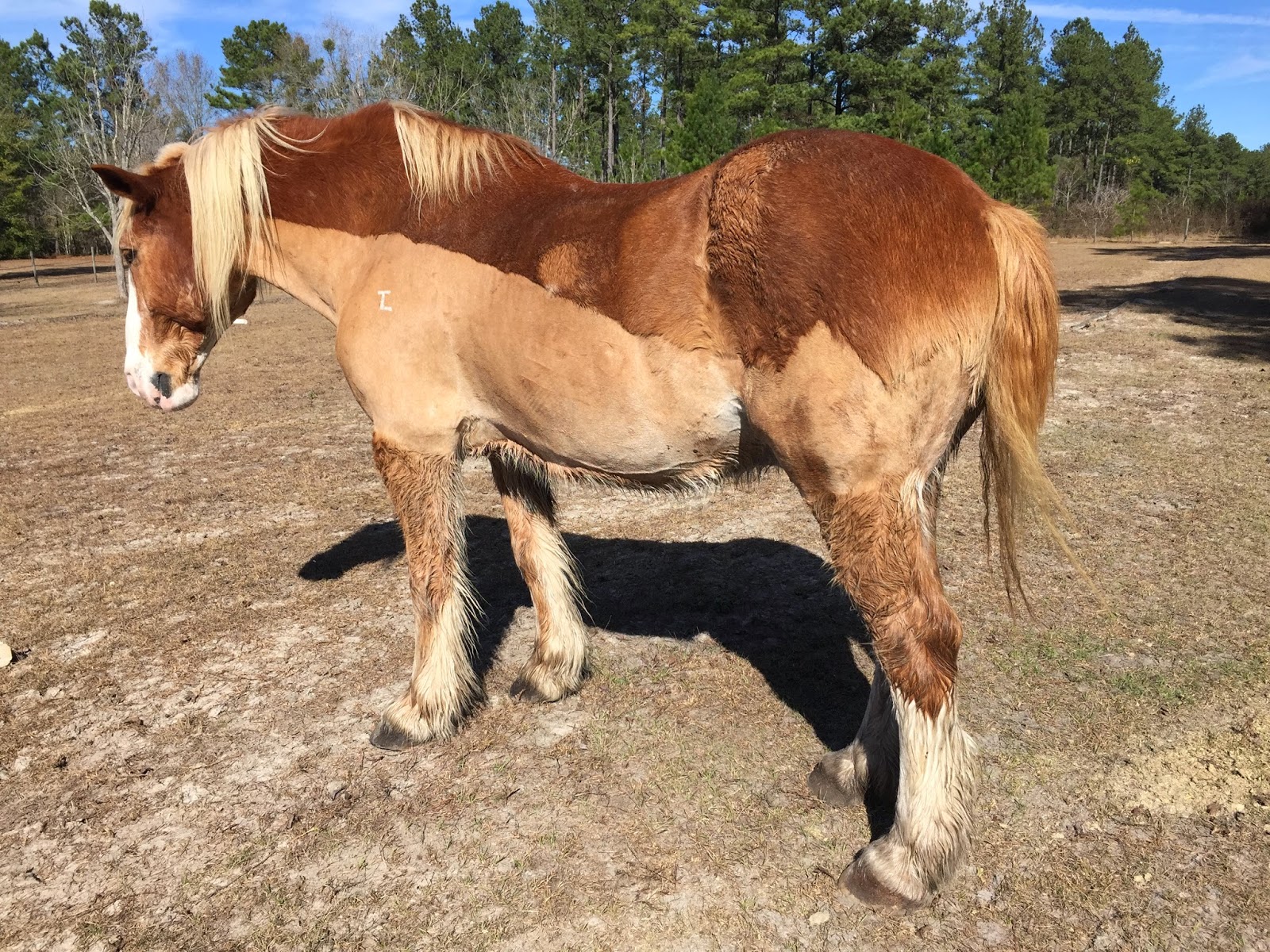 He got IN the pond!!!  The owner's husband told me he had witnessed Wes AND Klein get all the way in the pond the next day.  It has been in the mid-upper 60's but the pond is cold!  Crazy ponyfaces.  I had just clipped more hair off Wes the day before too.  He was still getting sweaty just standing around.  Let me show you why: 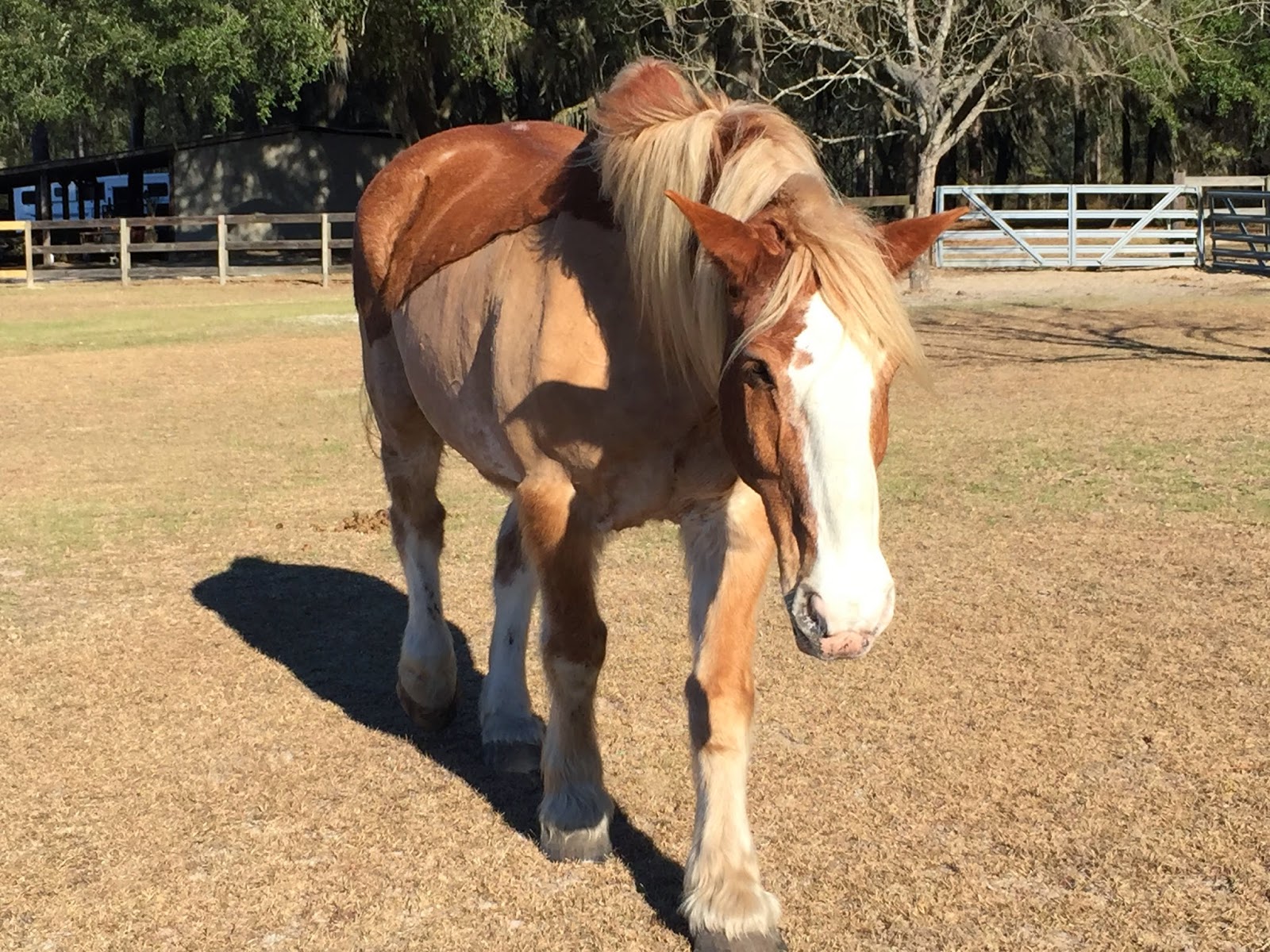 The Handsome right after his haircut. 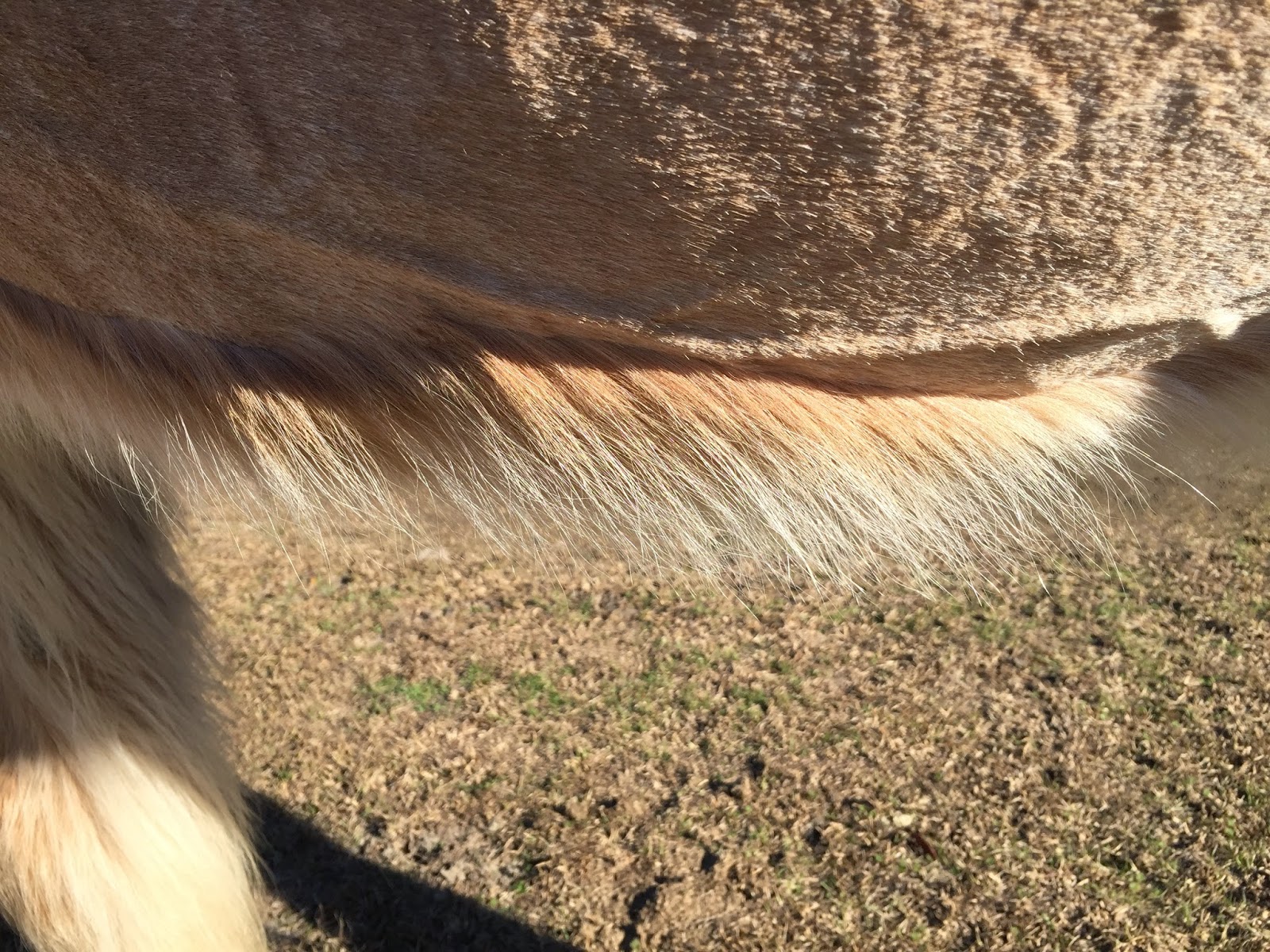 And for comparison.  LOOK at that mammoth coat!!!!  That thing is like a RUG!

After Wes came in dripping wet The Other Half wanted to see if he could get them back in.  Of course Mochs can be convinced to do about anything for a treat. 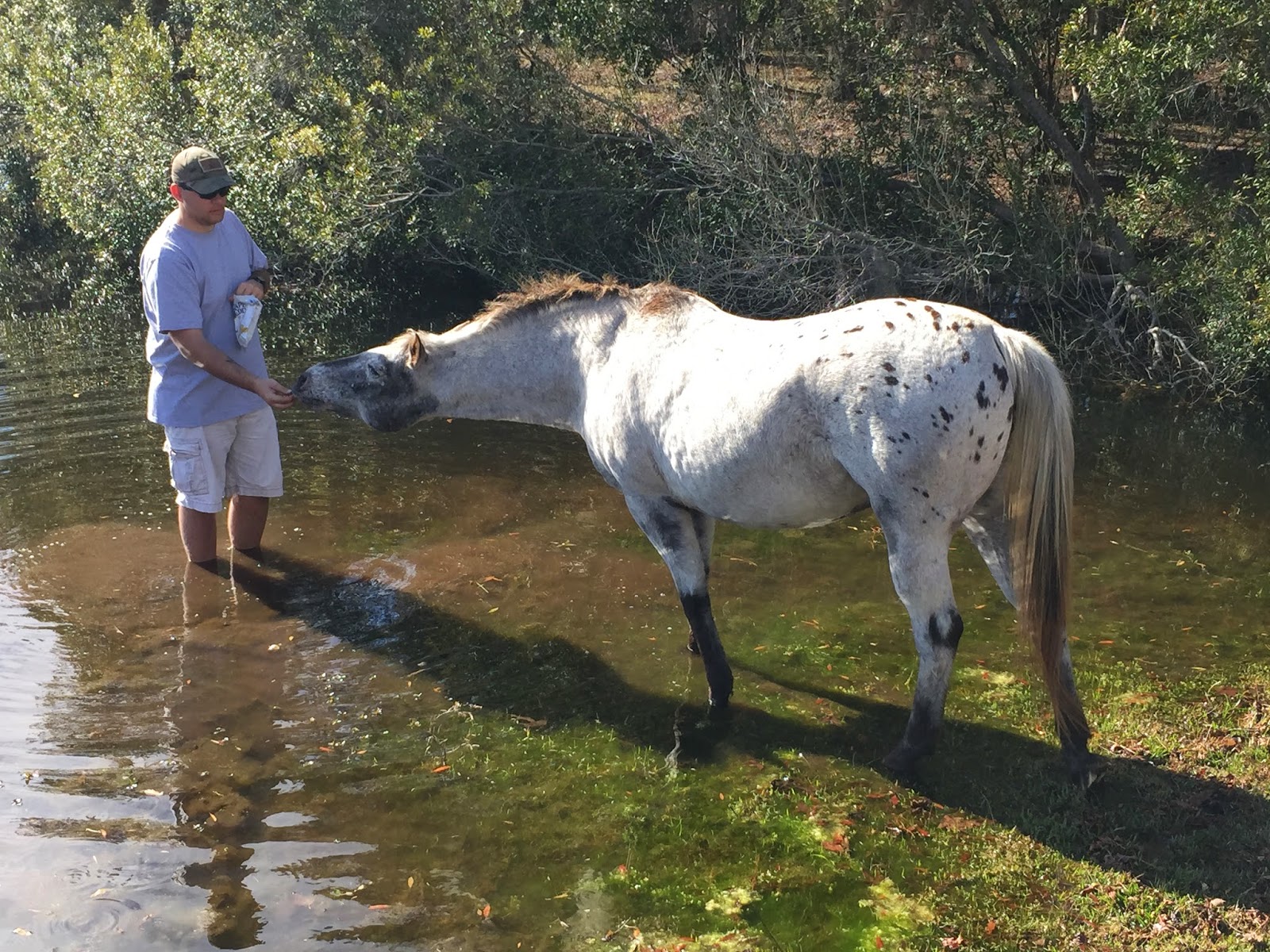 Well, I thought the water was cold but The Other Half has no problem standing in it. 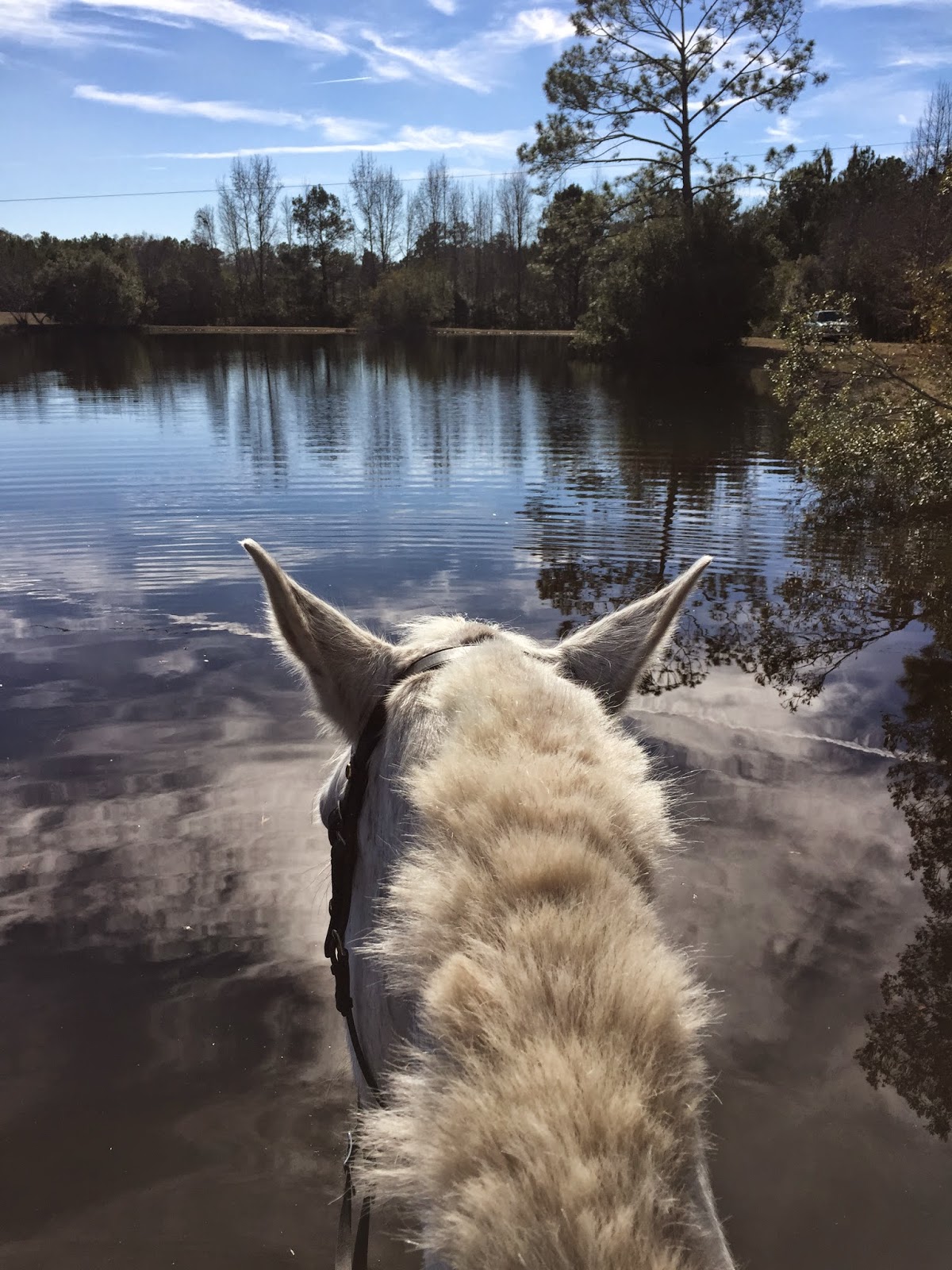 I took Klein to the edge and she didn't have a second thought about walking in.  I only took her in just below her knees though.  We still had work to do and it's not even close to being warm enough for me to even consider touching that water.

I took Wes for his first hack off the property the other day.  He was concerned about his girls and would call to them but he didn't refuse to do anything I asked of him.  We had a nice ride in some perfect weather. 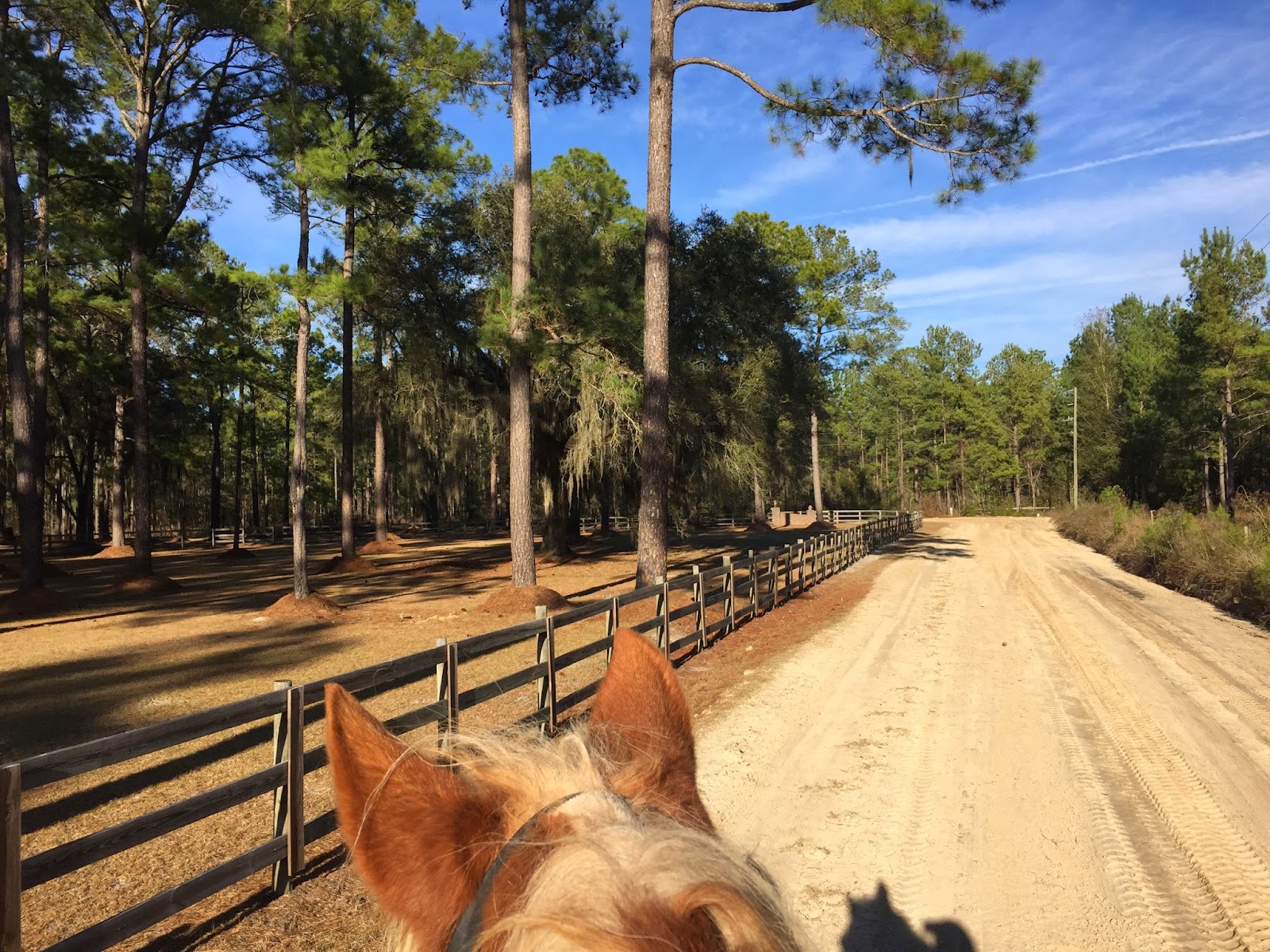 
Mochi has been on the longe line.  Still just going with the general idea of getting a fitness base back on her. 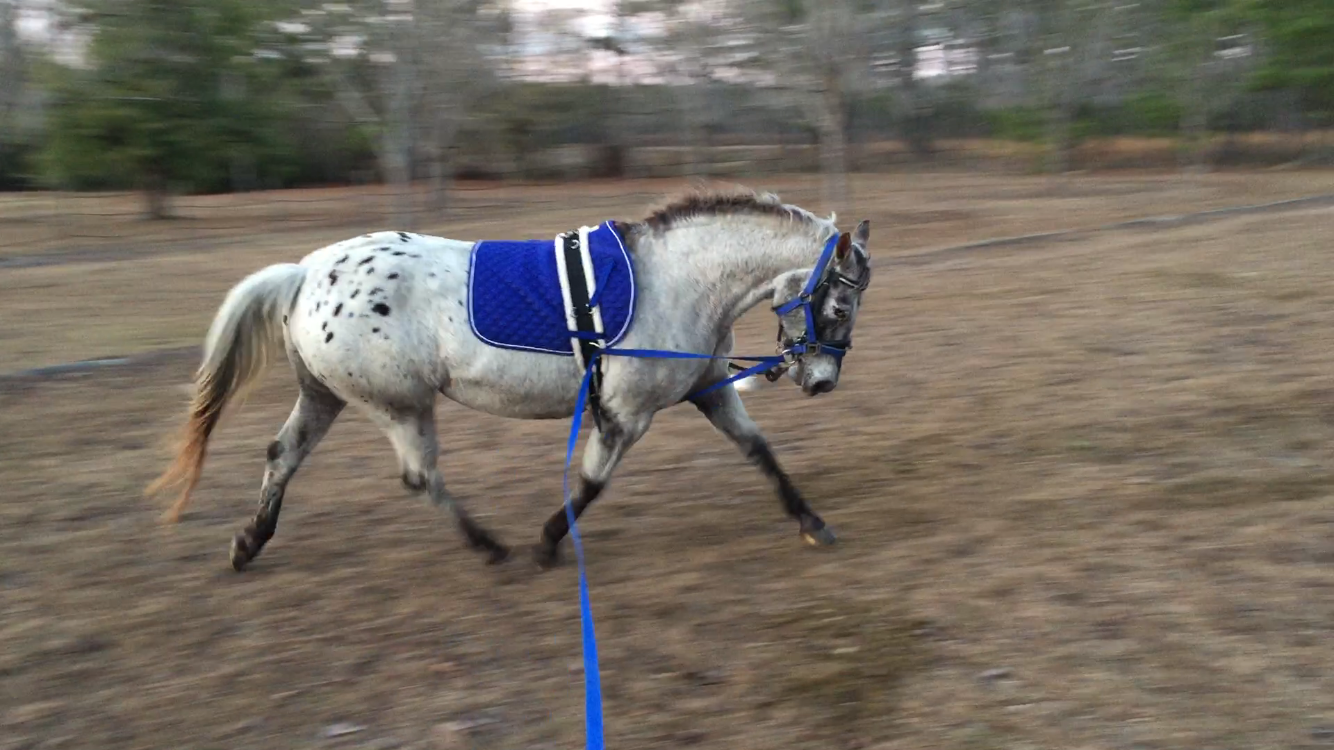 Look who showed up to work that evening.


Oh, and The Other Half calls me out a lot for spoiling the ponies.  He does it too, but sometimes I will get off track on a plan because I'm such a sucker.  Like Mochi getting grain right now.  Does she need it?  NO.  But...I would feel so bad if she had to watch Klein and Wes get their grain and she gets nothing.  Yes she has a round bale, but she stands there and nickers, and it's way too adorable to say no to.  Yeah, it's that serious.  This is why she gets a very small amount.  It started out as just grain too, but Wes gets BOSS.  Well a little BOSS never hurt any pony mare and if anything it'd put a nice shine on her, so........see where this is going?  This is why I NEED The Other Half to reel me in sometimes.  Except yesterday.  We were out of town for three days and we went straight to the barn when we got back into town yesterday.  We're fixing their dinner, and guess who puts granola bars in it?  Not me. 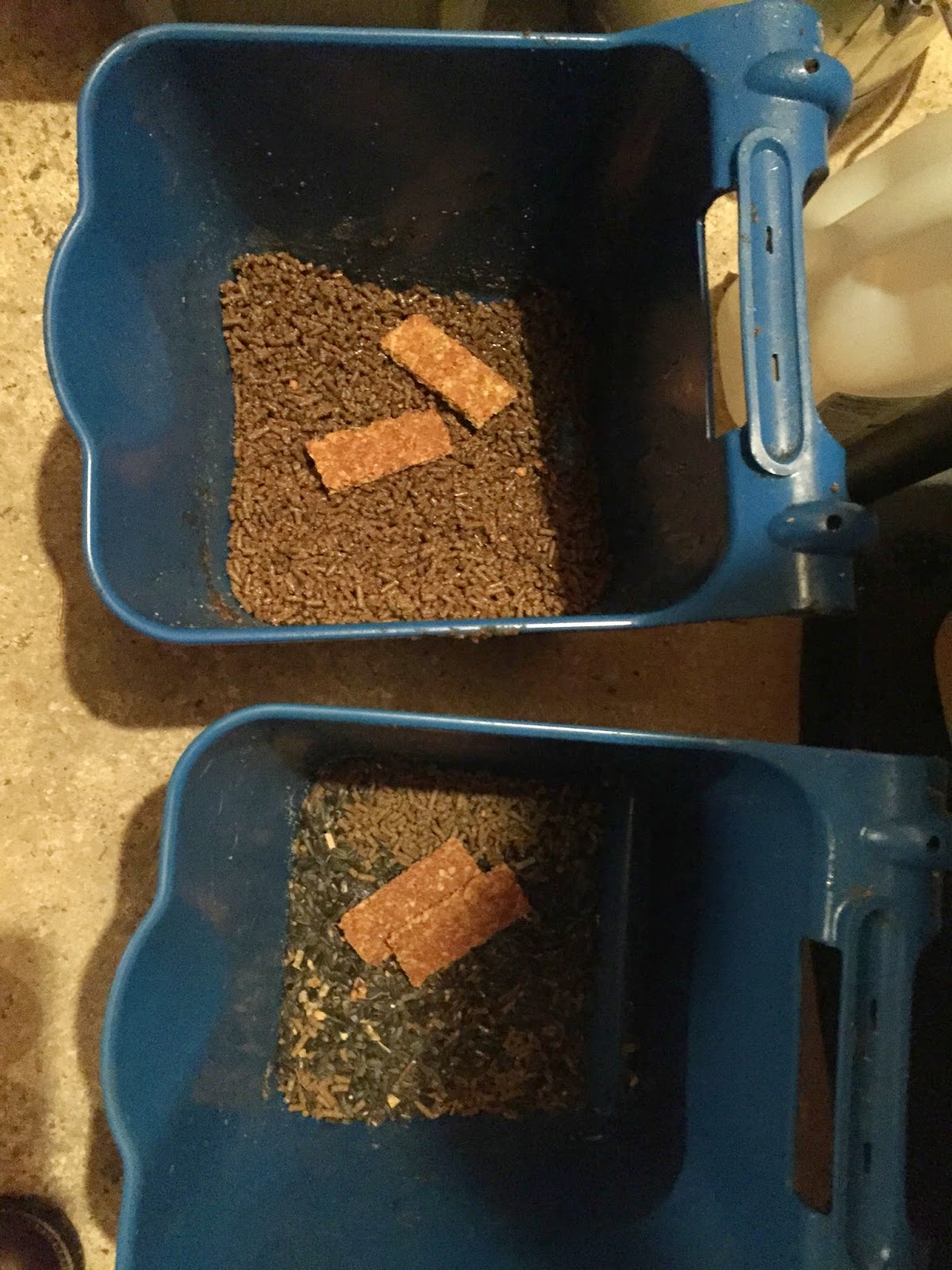 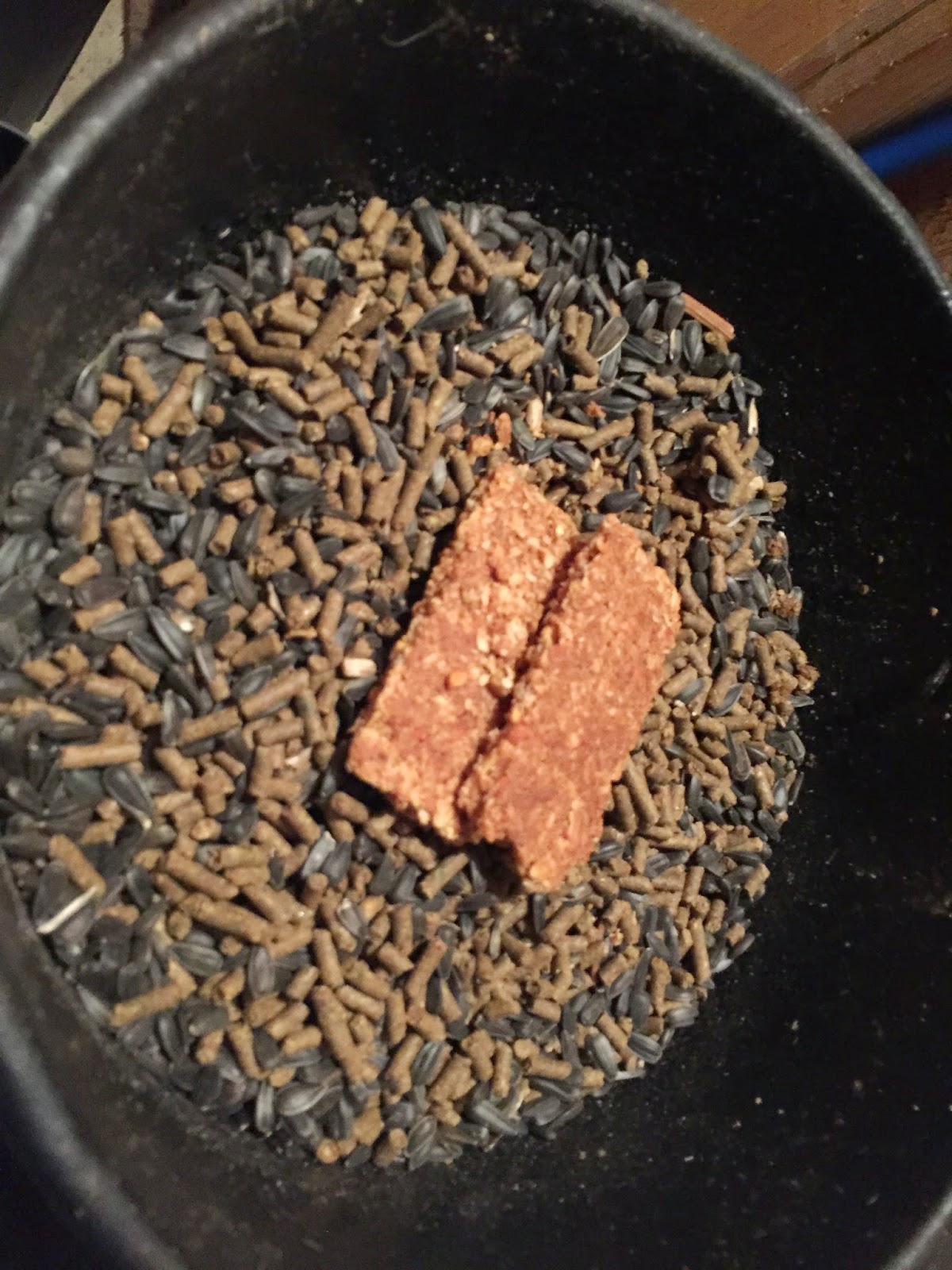 Pics or it didn't happen.


Ha!!!  He said it was because we were gone for a couple days.  Well, you know I'm not going to argue.  He spoils them too though, he is the one that keeps the constant supply of their favorite granola bars in stock anyway.  He actually buys them giant boxes of 96 granola bars off Amazon.  And wait until you see what he bought them while we were in Ocala yesterday (you'll find out in the next post).  You will also read in the next post where he ADMITS Klein is a princess.  He claims it was partly due to being hangry, I don't think so.  I should take a video of him doing his best impression of me talking about Klein, *in his best high pitch voice* "Oh Klein mare, you're sooooo perfect.  You NEVER do anything wrong, anything that goes wrong is all my fault, you're never wrong!  You're my princess!"  It's pretty funny.

He would never deny them anything.  No expense is spared for the three ponyfaces.  I'm very lucky in that aspect.  He would NEVER give a second thought to any expense for them.  When I call him the Best Horse Dad in the world, that's 110% true.

One more thing, something I saw on FB that I thought was pretty funny: 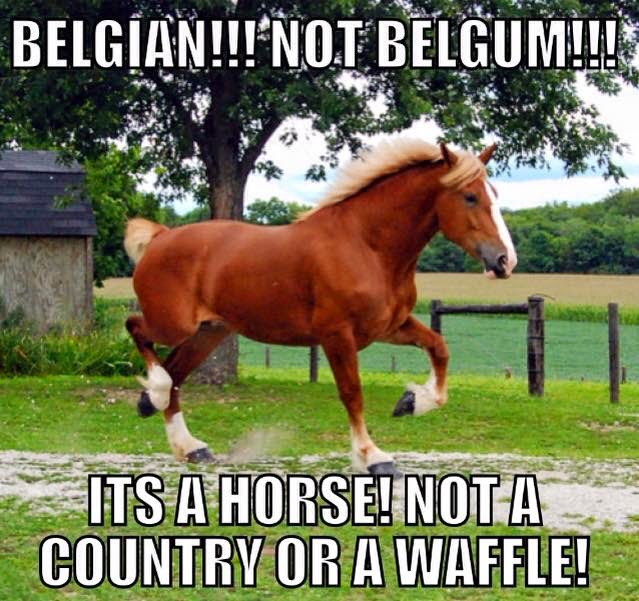 Of course, it's written terribly.  You can't expect any meme on FB to be written correctly.  The bottom is missing an apostrophe, a space, and comma.  It should be "It's a horse!  Not a country, or a waffle!"  You still get the point.

I cannot tell you how many people call BELGIANS, BELGIUMS.  Oh wait, yes I can, about as many people that call Klein and Wes Clydesdales.  NO.  WRONG.  I guess we can add that to the list of posts I need to write, a draft horse education post.  This makes me want to start calling Wes The Waffle after seeing this.
Posted by The Jumping Percheron at 11:26 PM