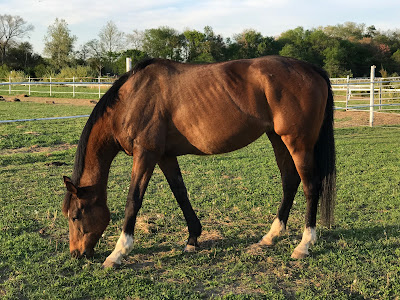 So, where has Ms. B been lately?  Enjoying spring grass, mostly.  About a month ago, when the spring grass really started to come through, Ms. B decided that was the best thing in the world and decided she was no longer domesticated.  At first I was a bit disappointed because that meant our progress came to a halt.  Then I decided it wasn't a big deal, I'll wait her out, let her enjoy herself, and gain a little weight off this grass.

About two weeks ago she started to come back to me.  Now I have no problem getting her, but she is still being kind of a pain for the people that bring her in for breakfast and dinner.  She is hit or miss with them, but lately it's been more hit than miss, so she's getting over herself. 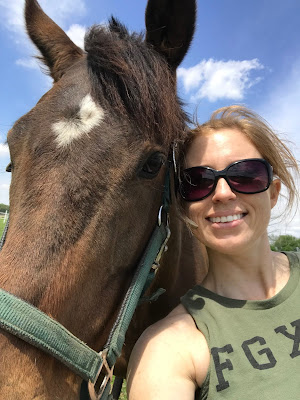 She is now back in regular work and I'm excited to make some more progress with her.  She'll be going to her first dressage show in a couple weeks with Klein. 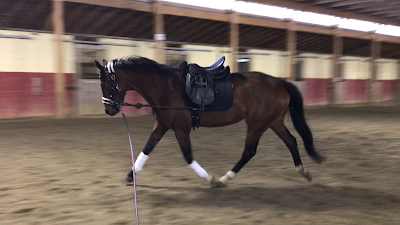 Workin' it for one of her lunge line workouts last week.  I don't ever lunge her before I ride her.  The days she is on the lunge line, that is all she is doing.  I just always lunge her in her dressage tack so that she gets more and more used to the feel of it. 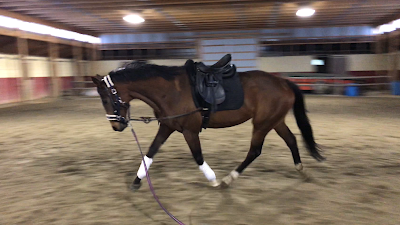 Something else that I have figured out with her is that she very much likes her quiet time.  I had an idea she did but lately she has made it blatantly obvious.  The barn she is at can get pretty busy some days.  When she's in the aisle and there is a lot of commotion going on she makes mare glares and is a little antsy.  Some evenings I don't get there until a little later and it is usually just us on those nights.

On those nights she stands like a statue and is half falling asleep.  She has no reaction to anything really.  One example is when I'm trying to put boots or wraps on her with a lot of commotion going on, she'll paw.  When it is just us, she stands like she's glued to the ground.  Normally she'll make some mare glares when I go to clip the front buckles of her sheet, when it is just us she has NO reaction whatsoever. 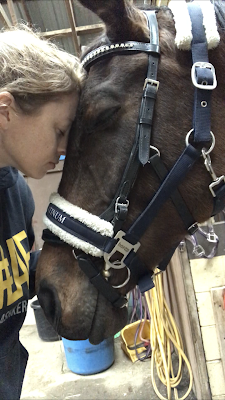 She would probably be mad if she knew I showed this to people.  It wouldn't be good for her image.

She raced for 5 years. She had 52 starts and they were all over the country.  I think she's just over the all the commotion of a busy barn.  Her life up until last November was filled with the busy activity of the backside of racetracks around the country.  I think she is genuinely enjoying just being able to relax, be a horse, have a person and not a slew of them handling/riding her.  She let out the biggest whinny to me the other day too, which totally made me forget all of her feral-ness the past few weeks.

My other theory is she puts on the tough mare front when people are around to give the impression of "Oh..........she's.........a bit hard to handle."  Maybe it's a defense mechanism so that she stays with me haha.  Normally when people are around she also doesn't like it when you kiss her nose.  You can pet her face, you can pet her ears, but do NOT kiss her nose.  She'll make a nasty mare glare.  When no one is around?  All the nose kisses in the world are completely acceptable.  There is no reaction, just a soft, kind eye.

This tough mare front is all on the ground, she's generally the same no matter if it is just us in the ring or if there's five other people in it with us.  The amount of other people and horses riding around never seem to make any difference to her when we're working. 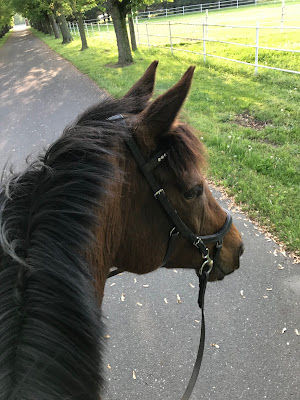 Cooling out after a ride. 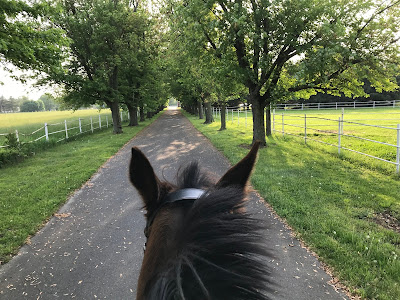 I'm looking forward to getting her out to shows.  I can't wait to get her all prettied up and braided, she's already a stunner, I can't imagine it's possible for her to be more beautiful, but show turnout might up her game just a little bit. 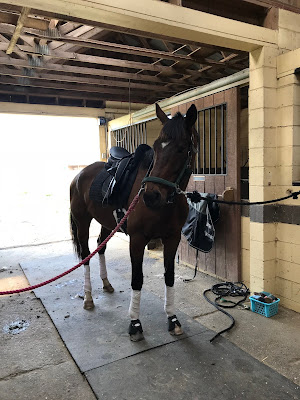 #stunner
Posted by The Jumping Percheron at 12:01 PM