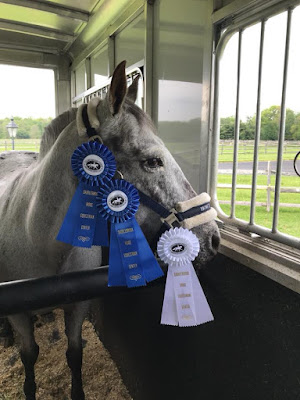 Last weekend I took Mochs to a schooling dressage show.  It is time for her to just get back out there.  I had a feeling she was going to be wound up with the way she's been going lately.  I was right, but that is why we went.  Shows need to become part of her regular routine again.  She made it to two shows last year and prior to that it had been two years since she had been to a show due to the Navicular roller coaster we've been riding.

While it could have been a worse day, it definitely could (and will be next time) be better.  She was her usual anxious self.  Two out of the three tests we rode she had ants in her pants for the halts at X and G.  She just couldn't relax, which has always been her biggest issue.  No matter if it is a place she's been a thousand times or not.  It doesn't make any difference, she's always been a handful from the day I bought her.

Most of our comments referenced the lack of relaxation and the fact she wasn't seeking the bit.  Tell me something I don't know.  I have tried just about everything with her, she gets out of the ring regularly, she's just ALWAYS been an anxious little horse.  Though I am going to start riding with an upper level dressage trainer in the area, hopefully no later than sometime within the next two weeks.  I am hopeful she'll have some new ideas for us to get some relaxation going on.

Luckily, where we lost points are areas that are very easy to gain them back.  Things like not being immobile at x, or being a bit resistant in a transition.  She has the basics down well, we just have to clean some things up.

Though, it wasn't complete craziness.  Mochs did have some very nice trot and canter when she did come through.  It just wasn't consistent and it was mostly in the warm up of course.  She was a good pony overall though.  She stayed in the ring!  What more can you ask for at a dressage show, right?

We did three tests and all were 60%+ so I guess it could have definitely been worse, and really, I just need her to get out to shows and get used to the routine again.  So, this weekend, guess what we're doing again?  Wish us luck :)
Posted by The Jumping Percheron at 7:00 AM