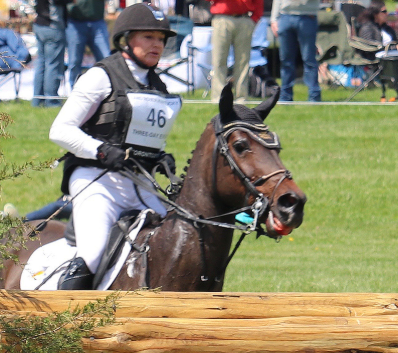 Finally it seems the outrage over Marliyn Little, aka Bloody Mary is starting to gain some ground.  If you're not familiar, the latest incident that caused the recent uproar was at this past weekend's Land Rover Kentucky Three Day Event.  Chronicle of the Horse wrote about it here:  RF Scandalous Displays Blood on Mouth at Land Rover Kentucky, But Veterinarian Clears Her

Now for those that don't follow eventing too close, that story sounds like it easily could be legitimate.  A horse cuts it's mouth somehow whether it bites its lip or trips and hits its face, both are absolutely possible.  The problem here?  This is the latest in a string of MULTIPLE bloody mouth incidents at MULTIPLE events on MULTIPLE horses.  Is that not kind of odd to you?  Why is it that no other upper level riders seem to have this problem on a regular basis, on multiple horses?

Here are some other articles about these incidents:

Article on same RF Indie incident in 2015: If it Bleeds it Leads, Or Does it?

Initially there was some support for Marilyn Little in the form of not only officials but media outlets (blogs). It appears as if that is beginning to decrease, finally.  How do you defend something that keeps repeatedly happening?

Now I do see where some of the social media outlets, blogs, etc... are coming from when they claim the outrage is the equivalent of a bunch of arm chair quarterbacks.  We without a doubt have WAY too many people that like to talk about riding more than actually riding and criticize upper level riders who ride at a level they would only be able to dream about.  Or they act like they have NEVER made a mistake in their life while on the back of a horse or around the barn. I for one would NEVER claim to have a fraction of the skills the upper level riders have.  If they do something I don't understand I would immediately default to the fact that they have light years of experience on me at a level I will never compete at.

Does it really take someone that trains and competes at that level to understand that this is not right????  No, it doesn't and in my opinion it's a piss poor attempt to justify it that way.  One article even stated "Have you ever bit your own tongue?" Yes, I have, and it hurts like a mofo.  The inside of my mouth or my tongue, they both hurt if you bite them.  So your point is?

Others have claimed it is the eventing world being bitter that Marilyn Little came to the world of eventing from the world of Grand Prix showjumping and has had significant and consistent success at every level she has competed at no matter if it was in or out of the U.S.  Maybe some people would be pissed since 8 years is nothing compared to the amount of time they have been competing in the eventing world as professionals.  But, all of us?  Hey if you have the talent and the resources to come in and have quick and consistent success in a fair way, more power to you, I don't see a problem with that.  I don't find that grounds to hate on a professional rider.

There have been other upper level riders eliminated for bloody spur marks or blood in a horse's mouth at different phases.  Some were immediately eliminated, others were not.  Again, shit does happen, especially at the upper levels on super hot, super fit, super strong horses on massive, technical courses.  I can totally appreciate that fact.  But, these other riders, some from the U.S., some not, are they REGULARLY running around courses with blood on their horse somewhere?  Again, why does Marilyn Little have this problem again and again on various horses in various incidents?

There also have been claims made in an attempt to defend her that there are other upper level riders that are conducting unethical practices to keep horses sound and they are the reason more of the professionals don't speak up.  That still doesn't give anyone a right to be of the mind that if other pros are doing it and not getting caught then why is this a big deal?  Well, shame on those that are doing ANYTHING unethical to mask lameness just to be able to still compete.  Put them on front street to.

Marilyn Little just has the misfortune that her issue is out there where officials and spectators alike can see it for miles at a time.  Not all of the spectators are at every jog, and if anyone does capture something odd going on at a jog, by all means, post pictures and video of that too.

Even RF Demeter has not been seen with blood in her mouth on course since another rider took over the ride on her.  Weird.  Though, coincidentally that rider (Hannah Sue Burnett) is actually in trouble with the FEI at the moment after failing a drug test, but hey that's still not blood in RF Demeter's mouth is it?  I'm not saying that is any better either, btw.  You can read about that here, where she had a positive test for Adderall, a prescription drug.

Here is the response from Marilyn Little after last weekend:

...where she fails to address the fact that this is something like the seventh incident now.  Only this time, I think she has found a new strategy, reporting it in the warm-up to shift focus slightly off of herself and on to the officials.  This weekend was basically like, "hey look I told on myself and the officials said it was fine."

After this past weekend, the heat is finally beginning to increase as public outcry has hit an all time high with some companies cutting ties with her.

Admittedly I was not familiar with EnviroEquine and Pet prior to this, but you better believe I have went shopping on their website after this!

MDC Stirups' FB page is very interesting today because just hours prior to the post below they had posted something in the 100% opposite saying they support her and will continue to since no official charges had been filed.  Well, I have news for you MDC, just because charges aren't filed does NOT mean something did not occur.  Anyone that commented on that post in the negative had their post deleted with some of them being blocked from the page.  Real professional.

Now, here we are, just hours after that all took place, with the post below.  Well good for you MDC.  Way to grow a spine.  They have a lot of other professionals that they sponsor and my hope was that if they kept up their support of ML the other riders would drop their sponsorship if they could.  But, MDC remedied that quickly today.  Smart move. 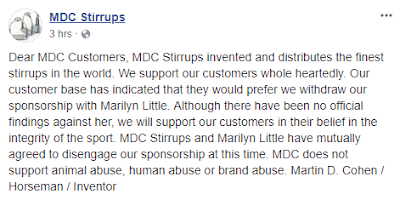 Also, last weekend since she was the highest placed U.S. rider at Land Rover Kentucky, she was named the Land Rover/USEF CCI 4* Eventing National Champion.  That has prompted a new, trending hashtag for her:  #notmychampion This hashtag is lighting up equestrian social media right now.

I have also seen a few posts from officials that both participate in recognized and local unrecognized horse shows of various disciplines to include eventing that are in support of Marilyn Little.  Hard to describe how disappointing that has been.  Respect for them to some degree has been lost.  I was genuinely surprised, and disheartened to see those posts.

With the public outcry being so loud this time (it increases with each incident) and sponsors cutting ties, that the governing organizations are listening.  This has been nothing but a massive disappointment with the FEI and USEA.  Sure, she is involved with very big money but so are some of the other upper level competitors that are competing ethically and fairly.  I hope this one person is not worth the risk of losing supporters and all of us lower level peasants that bring money into the organization in an already dismal time for the sport.
Posted by The Jumping Percheron at 8:16 PM