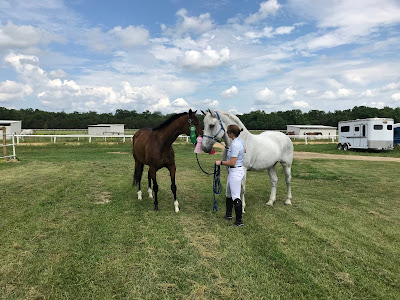 Klein and Ms. B went to a dressage show last weekend.  That was Ms. B's first time at a show.  I didn't expect anything too crazy from her since she has been all over the country already.  Klein, well, we all know Klein knows the routine and is an absolute pro at it. 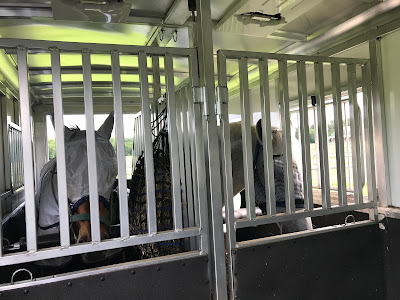 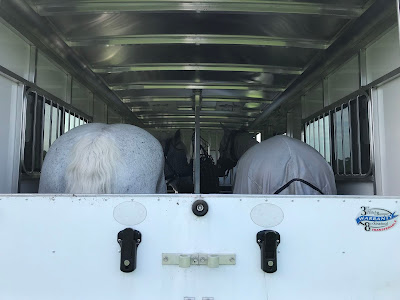 I put Ms. B into two Intro tests and Klein did a couple First Level Tests.  Klein was her usual amazing self and Ms. B just wasn't quite sure what we were supposed to do there.  She had her green moments in the ring but the good news is that is all they are.  She wasn't being bad, she just doesn't know her new job yet.  I also suck at time management at shows and I got on her later than I planned.  Right as we were walking up to the warm up I heard our number called that we were on deck.  Oops.  So that wasn't fair to her. 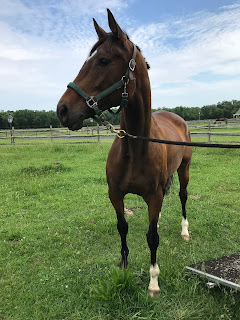 Her first test had issues with contact, which are a work in progress and she wasn't quite straight down the long side.  Though we almost didn't make it IN the ring to start with, so the fact that we were in there was a victory.  This was the second time she had ever been in a dressage ring too.  Which really shouldn't matter because the movements are so simple and elementary for those tests, but I honestly think she was just kind of like wtf do we do in here? 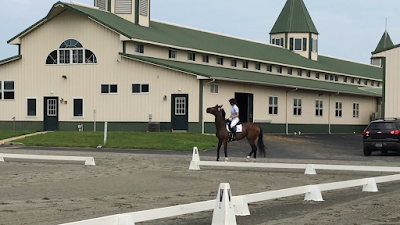 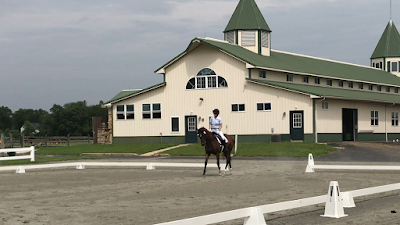 The second test was slightly better except after the first halt we had a disobedience because she didn't want to pick up the trot when we went forward from it.  Once she got going though, she was fine.  Her bend needs some work, but that is something we have been working on.  I have taught her shoulder in to help that, and we have started putting leg yielding into every ride.

That was the first time I have ever had a disobedience in a dressage test, and also the lowest scores I have ever gotten (55-56%). 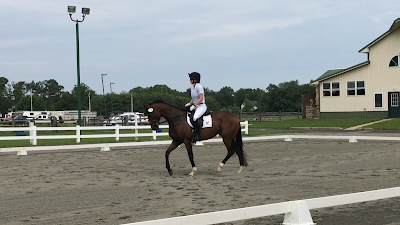 We started off in a good place... 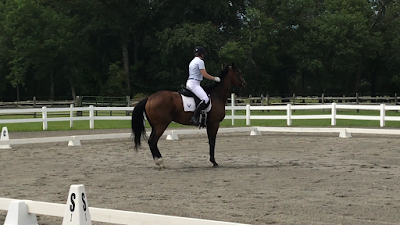 Then, instead of trotting off from the first halt she did a turn on her forehand and was like nah, I'm good.  Thankfully she did get going again and was over it.  Every now and then she'll get a little stuck somewhere. 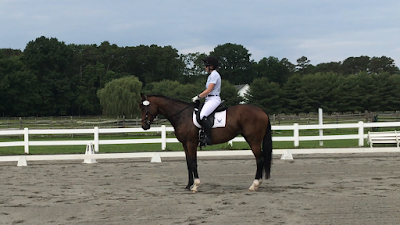 Ending on a good note.

But, for a horse that had five mins to warm up for something she has never done, I'd say it was successful.  Also, there were some horses having some MAJOR spooking issues and she was not one of them. 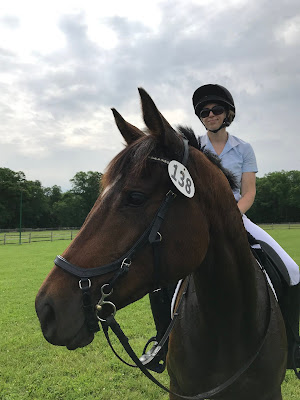 Watching the world go by in the warm up. 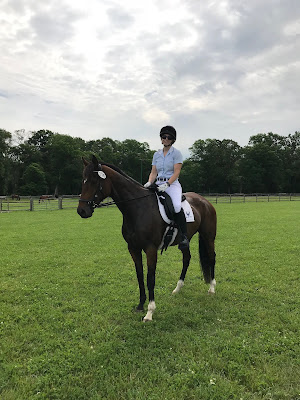 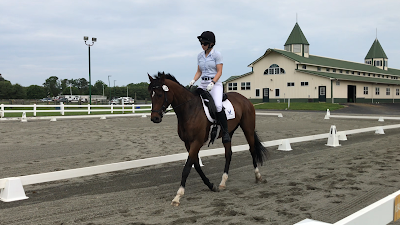 Klein. Oh Klein mare.  I genuinely had fun with her tests.  All of our dressage rides have been fun lately.  Show included.  She warmed up great and was ready to go.  We did First 1 & 2.  I would have done 3 as well but I only learned First 1 & 2 the day before and had never ridden them so I thought I better just work on remembering those two for now.  Once I heard the bell and went around to A, I had the biggest smile on my face, because I was just having fun already. 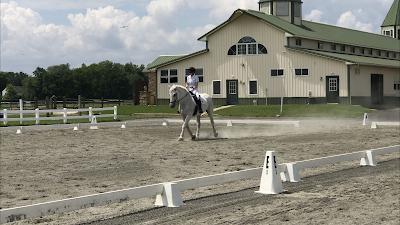 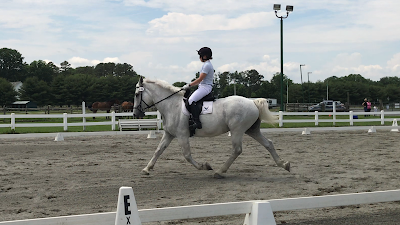 First 1 went great until I forgot the last lengthening at V but as soon as I got about one step past V I immediately did a U-turn and came back around to correct myself.  That is the second time in 7 years I have EVER forgotten a movement in a dressage test.  So I robbed Klein of a couple points but she still got a 64%.  First 2 went well and I made no errors.  Our biggest thing was the straightness on our leg yields.  I didn't sit the first one, and I should have.  I sat the second one and it was much better.  We also got a 64% on that test as well.  We got comments on both tests about our 15m canter circles that suggested we work on balance a bit because Klein was falling in just slightly.  Though the judge did say it's pretty obvious I'm working with a force about 10 times my body weight haha!!  She said she wasn't unsympathetic to the amount of work it takes to ride a big horse like her considering the weight difference alone.  Our halts weren't great either mostly because I wasn't really paying attention to them.  Normally I sit the trot into them and they're better, but for some reason I didn't that day and it showed.  Overall, the points we lost out on are very, very easily made up.  Klein couldn't have been any better. 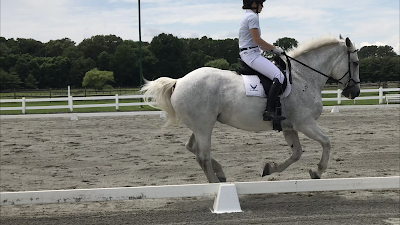 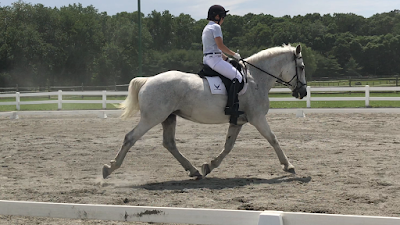 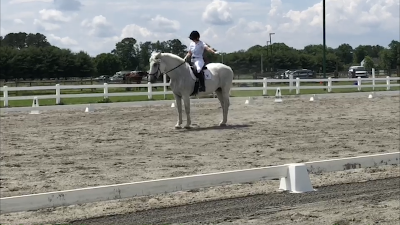 I had a long break between Ms. B and Klein.  B was first and then a couple hours later Klein went.  I know Klein doesn't care about hanging around all day.  It's obvious Ms. B doesn't either.  The both of them quietly ate their hay on the trailer.  When Klein got off the trailer to start getting ready Ms. B nickered.  I think she thought it was time for her to unload too because she kind of looked around like "me next, right?"  I just went about my business of tacking Klein up and B just went back to eating her hay.  When I walked off with Klein she didn't care.  She never made a peep. 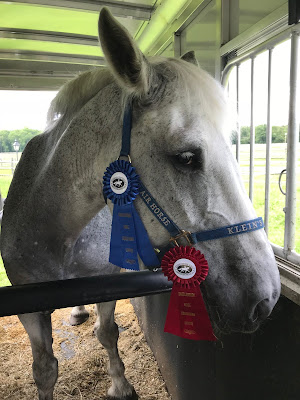 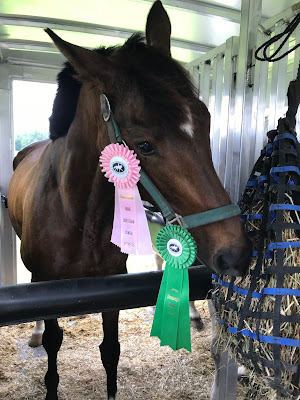 I'm really happy that neither of them really cared about the other.  They can clearly be trusted to go places with each other without one of them needing to be babysat.  Klein will be going to a rated dressage show in a couple weeks and Ms. B will definitely be going to another schooling show again very soon to get some more experience and learn what this showing thing is all about.
Posted by The Jumping Percheron at 9:26 AM