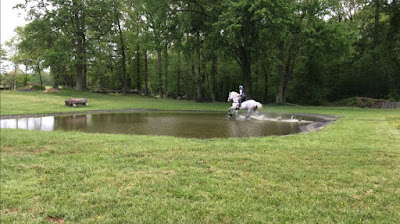 I have a had a few people here and there over the years ask me why I have Klein in a low port Kimberwicke for jumping.  My answer has always been she has always been comfortable in it and has given me no reason to suspect otherwise.  I tried a variety of bits with her when she was young and the low port Kimberwicke is something she just seemed settled in to me over a lot of other things I tried.  There were some bits that she just didn't seem to ever get comfortable in and would be a little fussy in the bridle. Some of them she just outright wouldn't listen to also.  No one has ever said much about it after I explained it and they usually have said if that's what she goes well in, why fix what's not broken?

Recently though, my jumping instructor suggested I try taking the curb chain off of it just as an experiment.  She does kind of keep her nose tucked in a bit in it but she still gets out and moves.  So we wanted to see if maybe we could get her nose out in front of her a bit more without the curb chain and get her to pull me to the jumps just a little more.  It definitely made an immediate difference.  She seemed a bit more uphill in her canter as well.

I always said I would never gallop her or jump her in her french link Boucher because we normally use that for dressage and I did not want her to figure out she could really get strong in it if she wanted to.  Jumping and galloping in it could potentially show her that.  However, she has been in her loose ring french link lately for dressage and going very nicely in it.  So, I decided what's the worst that could happen if I DID try her in her Boucher for a jump school?  She is light years ahead in training now than where she was when we first started using the Kimberwicke like.....probably 8 years ago!  She is very responsive to half halts and seat aids these days.  Also, if she really seemed to not listen or not like it for some reason, we can go back to the Kimberwicke.

I went for it and schooled her at 3'3" one evening last week and aside from a few very tiny differences, I really couldn't tell it was the Boucher in her mouth.  She went great!!  We had xc schooling planned for that Friday, which is why I only jumped her a little bit that evening, I just wanted to try a couple fences quickly with it.  She had my curiosity piqued now and I just had to see how it would be for xc.

She was AWESOME.  I'm keeping it.  It definitely lets her pull me to the fences a bit more and she was just having a blast to begin with.  I could feel her seeking the fences and locking on a little more pronounced than usual.  She was out there full on hunting jumps.  She realized she had a bit more freedom and just enjoyed it, didn't grab it and try to take off.  She never tries to pull any tricks on me when we are out there so I didn't expect anything crazy with a different bit.  I'm totally ok with her being able to pull me a little bit more, I think it actually maybe let her confidence come through even a little bit more like she has a bit more freedom to make decisions with that extra freedom, if that makes sense? 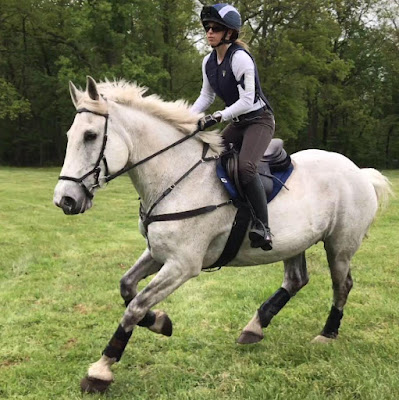 Photo evidence.  There it is.

Here is some video from that xc school:


And one of my favorites from that day: 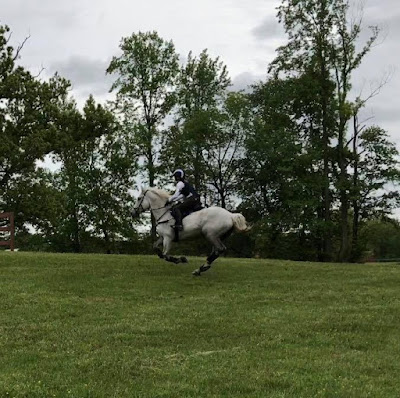 This is a very happy Klein mare doing what she very much enjoys.


We head to another course this weekend for another xc school, and I'm super excited to go out in the Boucher again.  The Boucher is staying.  We are officially putting the Kimberwicke down and backing away.
Posted by The Jumping Percheron at 10:28 PM