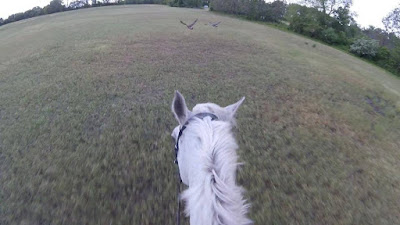 Beware of the Iron Hoof.  She rules the block with it.

I know a lot of people skimp on their conditioning rides because they just get bored.  You can get away with that at the lower levels to some degree with certain horses.  I can't do that with Klein.  So, to keep things fun I always have my MP3 player in one ear and we have our own little games we like to play out on our conditioning rides.  Yesterday we threw in some random geese chasing.

We actually almost got run into by about 10 deer about a week ago while galloping.  They narrowly missed us and Klein never even hesitated when they appeared.  There are plenty of horses that would disappear out from underneath you in a situation like that.  Part of it IS due to the beautiful mind of a draft horse, but some of it is instilling the confidence in her that SHE is the boss, not random animals.  And how many times have you ended up at a show where there's livestock and you see horses losing their minds?  From the age of three I had her watch sorting and chase cows on the trails on the ranch we were on in Hawaii. 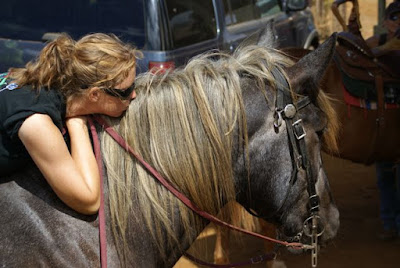 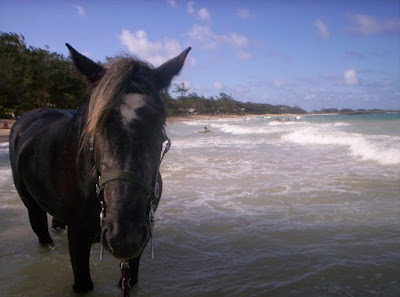 So anyway, that kind of wandered away from random things we do on conditioning rides.  Back to that, I also pick out things and imagine them to be jumps to set her up and count down to our distance just to work on my eye.  We race cars (that don't know we're racing them), sometimes I've done race commentary about Klein coming around the club house turn.  We make as much fun as we can.  I've found little ditches in the fields to actually turn into a ditch and we'll come back around and jump them a couple times on a gallop.

I happened to have my GoPro on me last night, so here it is:

Posted by The Jumping Percheron at 10:30 PM