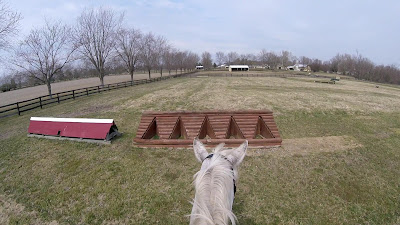 A week ago Saturday Klein and I went to school some xc at a place where we have competed before, but never schooled.  The course is fun, the footing is good and they are now doing Training at their unrecognized events.  The last time we were there is last year where we won the Novice Rider division at their unrecognized event and it rained from the second I pulled out of my driveway that morning until the second we pulled back in the driveway that afternoon.  I feel like we got robbed of really enjoying the course that day because we had to be careful with all the rain.

That Saturday was gorgeous and we had a great time!!  I didn't run Klein at Training speed since it's still early and her gallop workload is steadily increasing at this point.  This was more about just getting her out on a xc course.  This is our second xc school of the year, second of a ton.  I just wanted her to pop over some stuff confidently and not run her too hard since it was going to be noticeably warmer that day than it had been in weeks and she still had some of her winter coat.  I knew she'd get hot easy that day.

She was a good girl like usual.  She did get a little looky at the trakehner I would guess since no matter which direction you come from you are coming down a steep hill to it so she can see into the ditch under it and it probably looked a little odd, but she was fine after the first time over it.  It made sense to her that it was just another jump, nothing special.

The water was closed that day unfortunately but that's ok.  Klein goes right in and out of water, so yeah it would have been nice if it was open but it's not a big deal that it wasn't.

At 3:40 you will see us jump up on a bank that has a steep little hill on the top.  Well, I forgot that it very literally drops straight off the other side.  That is why we slowed down.  That would NOT be run like that on an actual course.  I was like, "Well, we're already here, go ahead" and Klein went off of it.  Might as well, right?

Here is the helmet cam from that schooling:

Posted by The Jumping Percheron at 8:51 PM